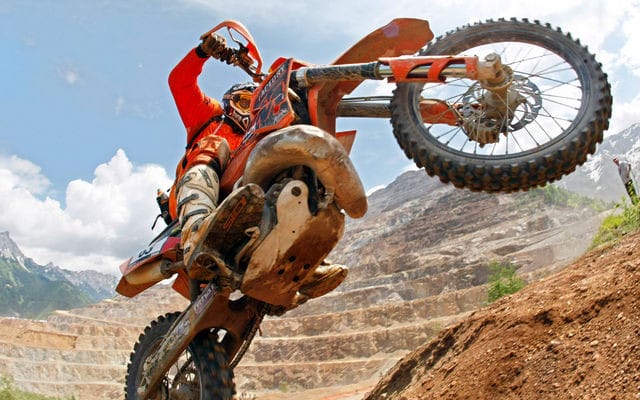 An enduro competition, similar to Austria’s infamous Erzberg Rodeo, is slated to take place in the Badlands of Alberta this summer. Xtinction, Canada’s first extreme enduro event—named  in reference to the dinosaurs found buried in that part of the country—is the brainchild of Corner Grass Racing Team (CGRT) founder, Lee Fryberger. The event is part of CGRT’s mandate to, “provid[e] the foundation to enable a long term focused Canadian effort to compete in extreme off-road motorcycle events in Canada, USA, and Europe.”

With the advent of ‘Extreme Hard Enduro’ events in recent years; as well as CGRT’s involvement in many of these events; I really wanted to combine our experiences and bring this type of event back to North America,” says Fryberger.

“We have recently secured access to an incredible area for Xtinction. It is the most compact, gnarliest terrain imaginable and will offer unbelievable spectator and media viewing opportunities!  Best of all, it is the perfect place to showcase the immense skill and precision of the competitors” adds Fryberger.

Taking place Aug. 22, 2010 near Patricia, Alberta, Xtinction offers a significant purse and hopes to attract the best riders from Canada, the U.S, and Europe. A CMRC sanctioned hare scramble, taking place on the 21st, will also be part of the off-road weekend, allowing enthusiasts a less extreme taste of Canada’s rugged Badlands terrain, say the organizers.