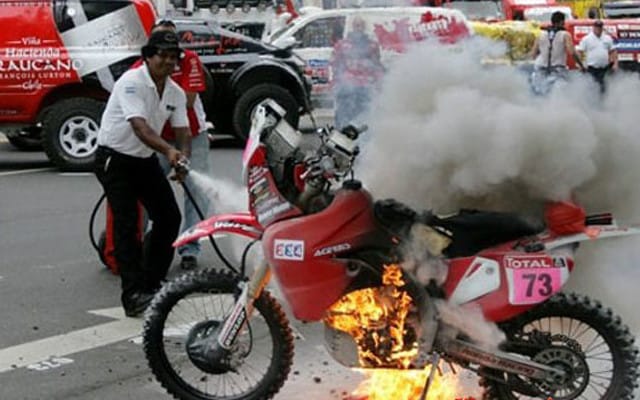 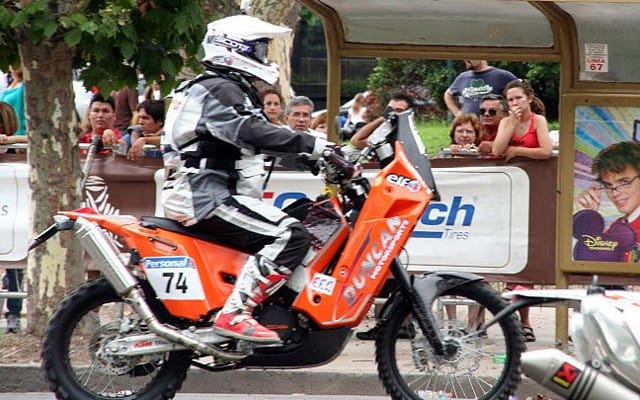 After rushing to move his bike away from a self-immolating motorcycle near the Buenos Aires start line yesterday, Duncan, BC resident Don Hatton wasn’t able to evade bad luck again today during the first stage of the 2010 Dakar Rally. According to the rally’s official website, Hatton rode the first 75 km of the day before realizing he’d forgotten his all important checking card back at the stage one bivouac. The unfortunate error forced the Team Rally Raid Canada rider to U-turn his KTM 690 Rally and retrieve the precious document, in order to compete in the first “special.” Hatton finished the day in 144th position 52’45” behind stage one winner, Frenchman David Casteau.

The sole Canadian motorcycle competitor in the 2009 Dakar Rally, when it took place in South America (Argentina and Chile) for the first time, Hatton this year finds himself battling against three other compatriots in the 161 rider field, Rick Hatswell, also aboard a KTM 690 Rally, as well as Andrew Scott and Patrick Trahan, both riding Honda’s CRF 450X. Trahan, 31’04” behind the leader, is the top Canadian thus far, with Scott 49’09” off the pace and Hatswell an hour and two minutes back in 147th position.

Stay tuned as we keep you abreast of the Canadian riders’ progress in the world’s toughest rally.