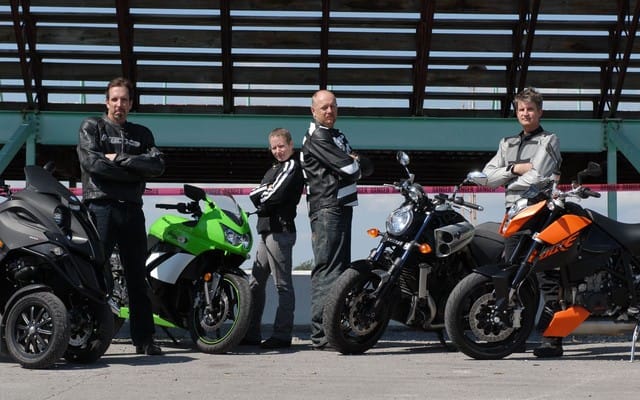 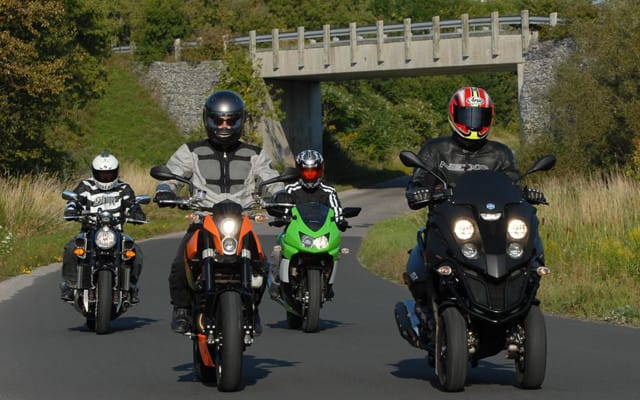 The premise of One Bike is simple. Just like choosing a desert-island music recording, we wanted to know which motorcycle each of us would choose if we could choose only one.

In the February issue of Cycle Canada we ask this question: If you could choose only one bike, which one would it be? Four CC testers chose their one-and-only and then argued like hell in defense of their choice. The 2009 One Bike contestants are Yamaha’s VMAX, Kawasaki’s Ninja 250R, KTM’s 690 Duke and Piaggio’s MP3 500 three wheeler.

Full disclosure compels me to admit that the MP3 was not my One Bike choice. I inherited the pick from editor Neil Graham after he decided at the last minute to take his daughter camping instead of joining us. Had he planned all along to stick me with a scooter and then take off? I thought the choice ridiculous, but Graham assured me that the monster scooter was worthy, with its 500 cc single powerful enough for the highway and its parallelogram front suspension capable in the corners.

I was still skeptical—as is my nature—until, near the end of the first day of riding, we reached a stretch of serpentine road where my preconceptions were completely shattered. The three-wheeler can be pushed to limits greater than I ever imagined for a scooter. It reaches speeds that put you in danger of losing your license and through the twistys at 130 km/h the MP3 is as thrilling as any other One Bike contestant. 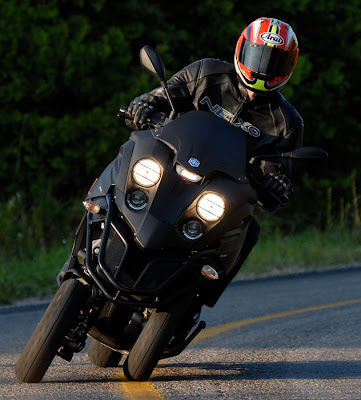 Still, there were a few things that prevented my full conversion to MP3 devotee. During long rides the crouched riding position caused acute back pain, which was alleviated only when I stuck my rump onto the raised pillion perch—hardly an ideal option. A simple flat seat, allowing the driver greater body-positioning options, would add to the MP3’s usability.

Aesthetic snobbery also prevented me from voting for the MP3. VMAX proponent Uwe Wachtendorf liked the MP3’s styling, and said that the black version reminded him of Darth Vader. But my wife is not a Star Wars (nor, alas, an MP3) fan, and if I arrived home with the MP3 she would consider it an act of celibacy seeking—and I’m not ready to enter a monastery just yet.

Had I my druthers, the KTM 990 Adventure that we had on the Fall Tour would have been my choice. (Check out a video review of the Adventure and the rest of our Fall Tour bikes here) The KTM’s manageable size, comfortable upright seating position, sporty handling and versatility make it a perfect all rounder—something I look for in a motorcycle, as one bike is all I can afford.

Find out what the other 3 One Bike participants have to say about their choices, in the February issue of Cycle Canada Magazine.