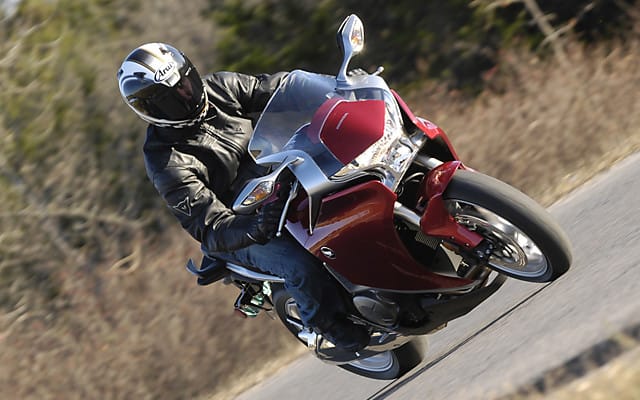 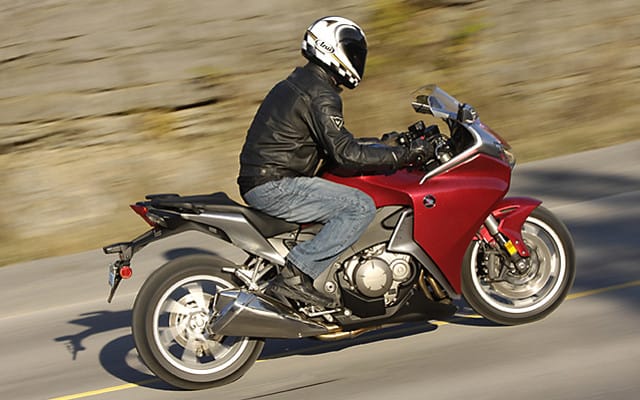 Honda wants to be your motorcycle company again. The wooing begins with the VFR1200F.

It is no secret that Honda’s reputation has lost its luster in recent years. The quality has remained, but its motorcycles have, at times, seemed like clinical tools for transportation and not the stuff of enthusiasts’ dreams. The VFR1200F, introduced to the Canadian media in Kingston, Ontario, in late October, is meant to address the criticism.

While it retains the V-4 configuration of the outgoing VFR800, the VFR1200F is a completely new motorcycle. The 1,237 cc engine has a relatively narrow 76 degrees between the cylinders, but retains the perfect primary balance of a 90-degree V-4 by utilizing staggered crankpins in the “phase-shift” crankshaft. The benefits are twofold. A narrow angle means a less bulky engine to package in a chassis while the crankshaft configuration eliminates the necessity of counterbalancers.

The quest for compactness also led engineers to use the unicam cylinder head design that Honda employs on select motocross engines. The single camshaft per head reduces rotating mass and bulk, and acts directly on intake valves and indirectly on exhaust valves via a rocker arm arrangement. Interestingly, the cylinders are staggered. The rear-facing pair is nestled together (for a “slim waist” around the bike’s midsection, according to Honda) while the front cylinders are farther apart.

What is striking about the flanks of the VFR’s fairing is the utter absence of traditional air ducting vents. Closer inspection reveals a layered fairing with inner and outer panels. With the air that enters the radiator directly behind the front wheel, three streams are channeled in a manner that aids stability at speed. It lends the bike’s exterior both an appealing cleanliness and a slightly bulbous quality.

Engine character is the driving force behind Honda’s retention of the V-4 platform. Despite claims of a “pulsing at idle” and that “revving it produces a thrilling howl,” it is an engine of exceptional civility. Claimed horsepower is 172, but the linear power delivery disguises its outright power. It only takes a moderately robust throttle hand to break the tire loose on the cool pavement, so the outer reaches of its performance will be probed at the bike’s official launch later this winter in warmer climes.

More time in the saddle will be required before a substantive assessment can be given, but initial impressions are that the new VFR will make an exceptionally efficient, rapid, comfortable, and, yes, charismatic motorcycle. Granted, it does not proffer the immediate visceral satisfaction of a raw-edged sportster, but too quickly raw-edged becomes knife-edged as the miles mount. This is a bike that you might just love at the end of the day as much as you did at the beginning.

Oddly, during my ride every time I reach for the turn signal I honk the horn. I’m baffled until I read with astonishment that Honda transposed the horn and turn signal buttons for “ergonomic advantage.” Maybe Honda has also discovered that a honking horn at intersections is preferable to a flashing indicator. Now that BMW has abandoned nonsensical switchgear perhaps Honda is compelled to step in and carry on the weirdness.

We only ride a traditional six-speed manual-transmission VFR, but an option will be a dual-clutch automatic that retains manual-shifting capabilities. A slipper clutch is standard, as is linked ABS braking with paired six-piston calipers up front. A common touring-rider complaint leveled at the old VFR was the lack of factory-provided luggage, but this bike has discreet mounting indents moulded into the tail section. Honda claims that the left side of the optional 35 litre panniers will accommodate a full-face helmet. The top case has a capacity of 31 litres.

Availability, when the bike hits dealerships this winter, will be extremely limited. Not every Honda dealer will receive a VFR, and the price, though unannounced, is expected to be near the ST1300’s $21,000. But Honda’s purpose with the VFR is not to stuff one in every garage; rather, it’s the beginning of what they hope will be a long-term rebuilding of Honda back into what it once was: the enthusiast’s motorcycle company.