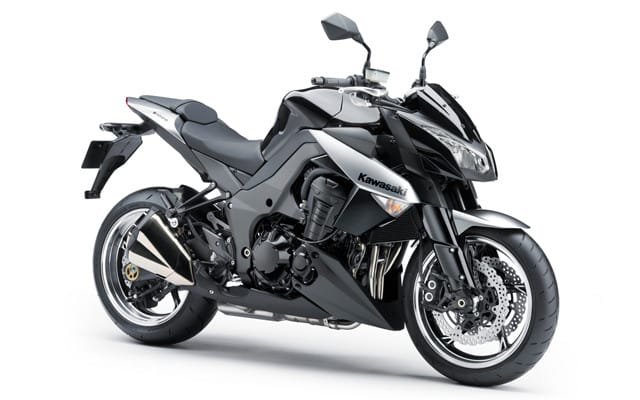 Gone during the 2009 model year, the Kawasaki Z1000 is back for 2010 and all-new, sharing only a handful of components with the old Z1000. The 2010 model gets a 1043cc engine built from scratch that claims 136hp and 81ft lb of torque and which Kawasaki says has been tuned for low and mid-range grunt rather than outright power. The liquid-cooled, fuel injection, inline-four is now cradled in a freshly designed aluminium frame and, in an effort to reduce vibration, attached by four mounts instead of the previous three.

The bike has new styling, a lower seat, and five-spoke cast wheels replacing the 3-spoke units adorning the predecessor. The linkage- type single rear shock—adjustable for rebound damping and spring preload—is now placed horizontally, freeing up room under the engine for the new exhaust system. Up front there’s a fully adjustable 41mm inverted fork. The Z1000’s distinctive four-muffler exhaust system returns, with wide triangular cans on both sides. As with the previous model, each side canister is really a single muffler, fitted with a faux dual-pipe cap to mimic a four-can look.

The 2010 Z1000 is only available in one colour, two-tone metallic black/silver and retails for $13,199. No confirmation yet, but we’re guessing you’ll be able to purchase one here in spring 2010 and we’ll keep you abreast of any new details as they come.