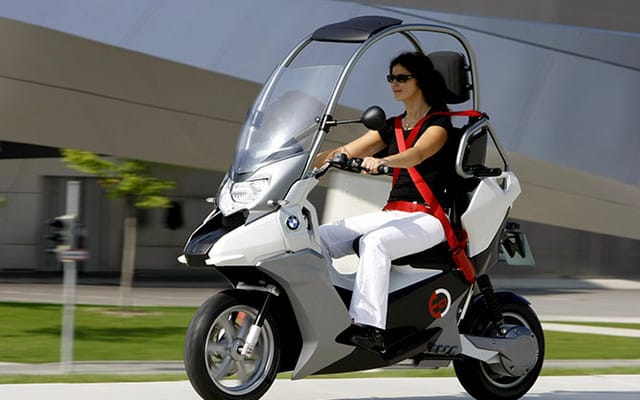 BMW has unveiled the C1-E, an electric version of its C1 scooter, produced from 2000 to 2003. Prepared for the European Safer Urban Motorcycling project (eSUM), the C1-E is designed to represent safe and environmentally friendly two wheeled urban transport of the future, BMW says. Safety features include seat belts,  roll bar, and an energy-absorbing nose for softening head-on collisions.

The concept scooter runs on a lithium-ion powered motor which BMW claims  possesses sufficient power for mastering most inner-city traffic riding. Alternatively the vehicle could also be equipped with an efficient, low-emissions internal combustion engine.

The C1-E is solely a concept study and there are no plans for series production, says BMW. Nevertheless, they claim that findings from the project will find their way into other future developments of single-track (two wheeled) vehicles.