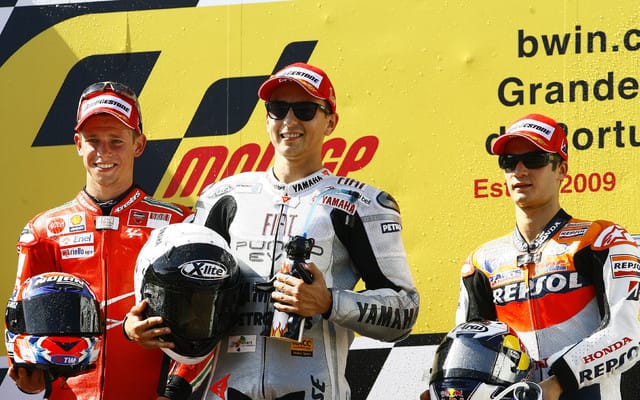 Fiat Yamaha’s Jorge Lorenzo repeated his 2008 Portuguese Grand Prix victory narrowing Valentino Rossi’s lead in the championship to just 18 points. Rossi finished fourth, the first non podium finish at Estoril of his MotoGP career. Casey Stoner is back and clearly in good form, as he finished second. Rounding out the podium was Repsol Honda’s Dani Pedrosa.

Lorenzo dominated the race for all but the first few turns to claim his fourth win of the season by a commanding 6.3sec and first win from pole since his debut MotoGP victory at Estoril in 2008.

“It’s been perfect weekend for us. I dominated practice and felt great on the bike. It is not always like this so we have to enjoy it,” smiled Lorenzo.“But I didn’t expect this victory with such a big gap and I didn’t expect Rossi to finish fourth,” he admitted.

“It was a very difficult race for me,” said Rossi of his disappointing result. “I was never able to be fast because I did not have enough grip in the rear and our tire did not work well, but I think it was more a problem of setting.

Rossi’s world championship lead has now dropped to less than one race win (25 points) for the first time since the German Grand Prix on July 19. With three rounds and 75 points remaining, Rossi and Lorenzo are now officially the only riders that can win the 2009 championship.