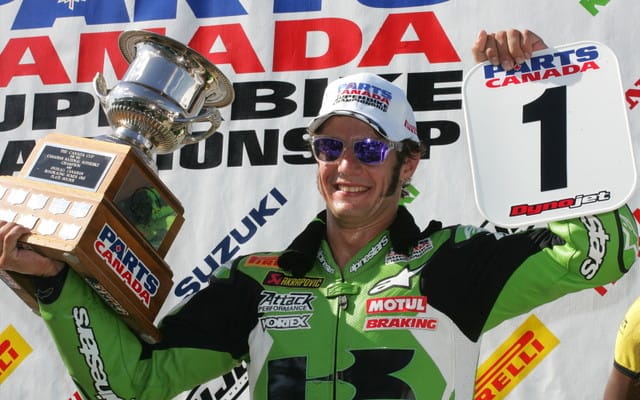 Brantford, Ont.’s Jordan Szoke claimed his record fourth straight Parts Canada Superbike Championship and his sixth career national crown with a second place finish in the season finale at Shannonville Motorsport Park on Sunday. Riding his Canadian Kawasaki Motors Kawasaki ZX-10R Szoke finished 6.121 seconds behind race winner Brett McCormick, but that was enough to give him the title by five points over the Saskatoon racer, 341-336. “I had to ride hard today,” the 30-year-old Szoke said. “I don’t know if I had anything for Brett. This is a lot of weight off my shoulders. Brett’s definitely given me the hardest run of my career. It’s been a super year, a really exciting year for me.”

McCormick needed a win to deny Szoke his sixth Superbike title and despite receiving a five-second penalty for a jump start the 18-year-old rider of the Team Suzuki / Blackfoot / Picotte Racing Suzuki GSX-R1000 dominated at Shannonville. He took the lead on lap three of the 20-lap race and pulled clear for his fourth victory in seven races this year. “It sucks to come up a little bit short,” said McCormick, who had shattered the track record in qualifying on Saturday. “But Jordan knows how to win. You don’t win four in a row without knowing something. A couple of mistakes from us earlier in the year cost us the championship.”

Szoke grabbed the lead from the start of the race but on lap two both Kevin Lacombe on the Team Toyota Yamaha / OTSFF Yamaha YZF-R1 and McCormick got by. McCormick took the lead from Lacombe on the following lap and Szoke got around the Yamaha rider a lap later. “I got a good start but then Brett and Kevin came by me and it took me a few laps to collect myself,” said Szoke, who won three races this year. “But I got a great pace going and got really comfortable.” Lacombe initially stayed close to Szoke but started to drop back at half distance as he struggled with handling issues. He came under pressure from the Suzuki Dealers / Acceleration Racing Suzuki GSX-R1000 of Clint McBain in the closing laps but hung on for third place.

“I was giving it everything I had; I don’t think I’ve ever pushed that hard in a Superbike race at Shannonville,” the Granby, Que. racer said. “I started pushing the front really hard and the rear was spinning like it was on ice.” McBain got by Lacombe in turn three two laps from the end but was passed back almost immediately by the Yamaha rider. McBain planned to repeat the move on the final lap but the Cochrane, Alta. racer was thwarted by a waved yellow flag in the corner. McBain claimed third in the final Superbike standings with 236 points.

Kars, Ont.’s Andrew Nelson placed fifth on the Nelson Racing Yamaha YZF-R1 to secure fourth in the final point standings and Steve Crevier of Maple Ridge, B.C. was sixth aboard his Deeley Racing Powered By Buell / Buell 1125R. Crevier was battling with the second Canadian Kawasaki Motors entry of Alex Welsh on the final lap when the two collided exiting the hairpin and Welsh crashed. Crevier was later placed on probation for two races by Parts Canada Superbike Championship officials for his role in the incident. Welsh was unhurt in the fall. After qualifying on the front row Mississauga, Ont.’s Matt McBride raced to seventh on Sunday aboard the Riders Choice Suzuki GSX-R1000.

Keene, Ont.’s Jodi Christie finished eighth on the Honda Powerhouse Dealers of Ontario / Roz-Gar Racing Honda CBR600RR and locked up the HJC Pro Rookie of the Year title. The top 10 was rounded out by Karl Daigle of Roxton Pond, Que. on the A. Perusse Kawasaki / Chaine Performace Kawasaki ZX-6R and the second of the Deeley Racing Powered By Buell entries, ridden by New Smyrna Beach, Fla.’s Dave Estok. In other action at Shannonville, Szoke also clinched his fourth straight Yoshimura Pro Sport Bike Championship with a runner-up finish to McCormick in the 15-lap race. In a race very similar to the Superbike event later in the day, McCormick took the lead on lap three on his Suzuki GSX-R600 and eased clear to a 5.993-sec. victory over the Kawasaki ZX-6R of Szoke.

Welsh completed the podium finishers on another Kawasaki ZX-6R after leading the opening two laps of the race. Szoke finished the season with 345 points to the 340 of McCormick. Lacombe was third in the final standings with 238 points after a fourth place finish on Sunday. Cody Matechuk of Cochrane, Alta. locked up the Armour Bodies Amateur Sport Bike Championship with a second place finish at Shannonville on his Suzuki Dealers / Acceleration Racing Suzuki GSX-R600. The race was won by his nearest title challenger, Sebastien Tremblay of Longueuil, Que. on the A. Perusse Kawasaki / Kawasaki ZX-6R, who finished 7.955 secs. clear of Matechuk. Tremblay picked up the Tirox Won Bigtime Award for having the largest winning advantage of the day.

Matechuk finished the season 41 points clear of Tremblay in the standings. Raphael Archambault of St-Colomban, Que. clinched the Suzuki SV650 Cup title by just a single point after a 12th place finish at Shannonville on Sunday. His nearest threat, Brantford, Ont.’s Rob Busby won the race and led the most laps to claim maximum points for the weekend but still ended up with 294 points to the 295 of Archambault. Steven Nickerson of Hamilton, Ont. took home the Honda CBR125R Challenge title thanks to a runner-up finish in the season finale. His main rival, Bodhi Edie of Warman, Sask. won the race but ended the season 15 points behind in second place.

Action from Shannonville can be seen in two one-hour programs on TSN HD and TSN. The first episode premiers on Tuesday, September 29 at 1:00 p.m. and will be repeated on Saturday, October 3 at 3:30 a.m. The second show premiers Tuesday, October 6 at 1:00 pm. and repeats Saturday, October 10 at 4:00 a.m. All times are EDT. The races will be also be shown in Quebec on RDS. Please check local listings for dates and times.

RESULTS OF SUNDAY’S SEVENTH AND FINAL ROUND