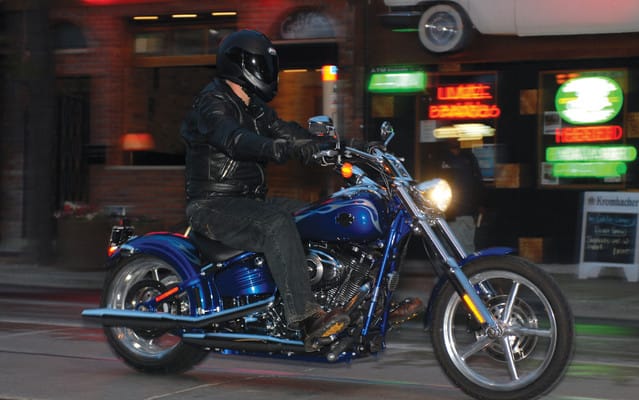 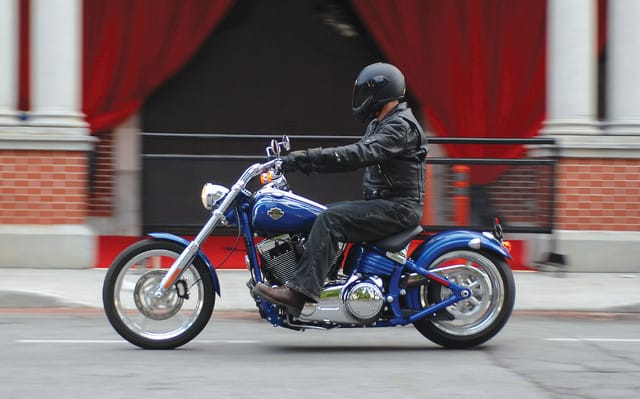 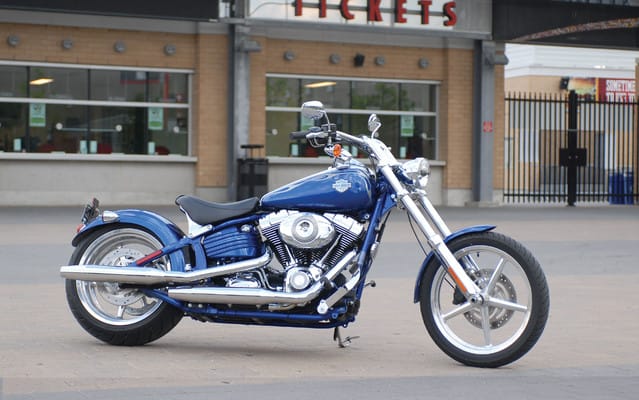 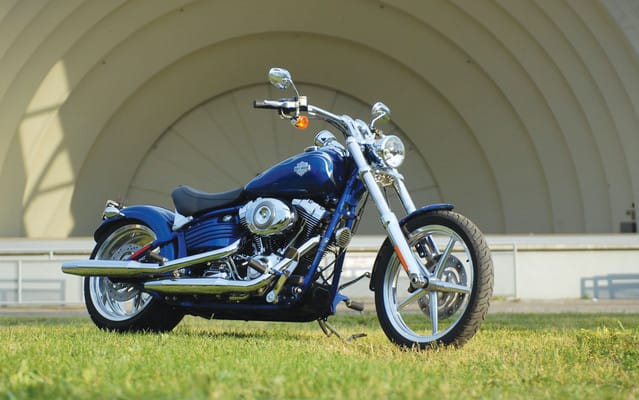 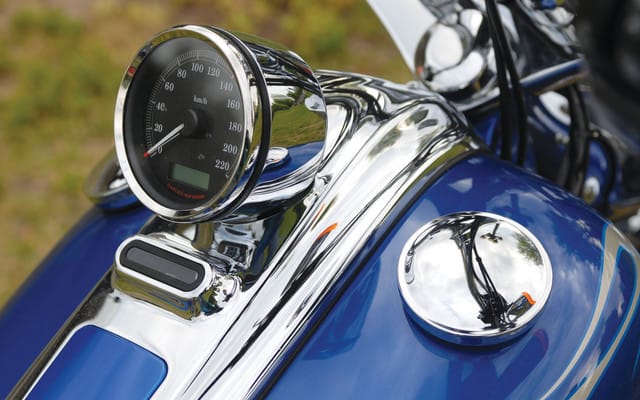 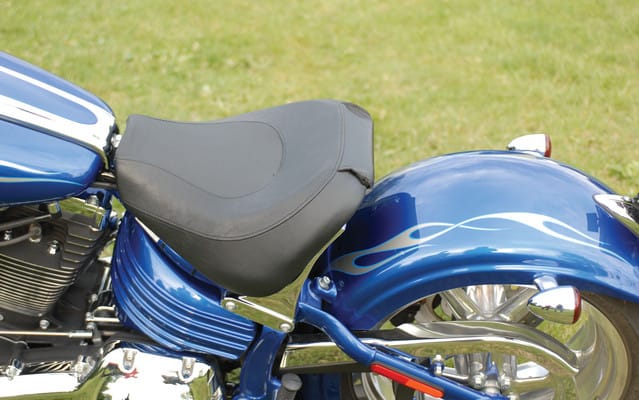 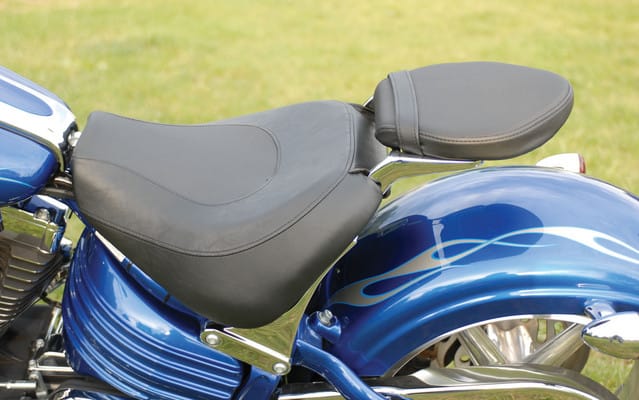 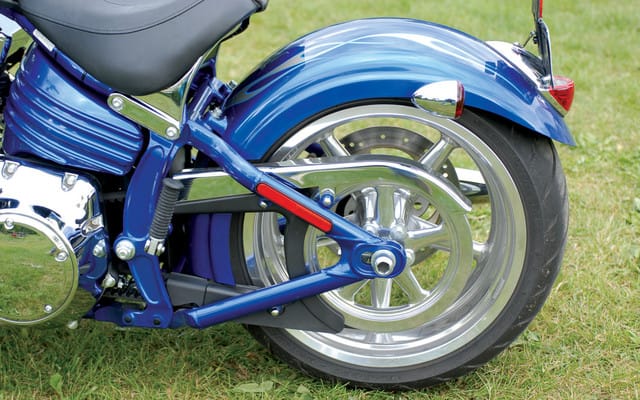 Even the most solitary of us acknowledge that sometimes we require the presence of a passenger. Harley-Davidson does its part for togetherness with the Rocker.  There is an intangible element to every motorcycle that influences the way in which it’s ridden. Something happens when you sit on a machine for the first time, guiding you how to ride it. Pragmatists attempting to explain this interaction will cite the effect that riding position has on a person’s psychological temperament. They will remind you of childhood experiences with toboggans where if you wanted to feel safe and enjoy the ride you would go down the hill feet first. Or if you had an insatiable need for a thrill, how you would drag the sled to a steeper run and place your head, the most vulnerable part of your body, first.

Furthering the analytical argument, there would also be mention of a machine’s physical limitations and how it restricts the way in which it can be used. But none of these points, despite how convincing they might seem, address the indefinable relationship people can have with a motorcycle. Riders are often heard describing their motorcycles as if they were referring to a person, someone they’ve come to know through time and shared experiences. The insinuation is that these machines have character, and just like our relationships with friends, we act in accordance to how that character makes us feel.

The Harley-Davidson Rocker C is an example of a motorcycle with character, but whether or not you get along with it will depend on how it makes you feel. You will need to ask yourself, do I want to go down the hill feet or head first? There are certain motorcyclists who will never understand this concept. Much to their chagrin, not every motorcycle is styled and engineered on the basis of sheer function.

The key ingredient of a machine’s personality is its engine, and for the Rocker it is the mainstay of Harley’s line-up, the Twin Cam 96B, an air-cooled, pushrod operated V-twin rigidly mounted in a tubular mild-steel frame. Operating this engine around its peak torque output (2,750 rpm) resulted in a smooth, almost sedate ride, and slight throttle adjustments, even when made at slow speeds, didn’t cause the annoying surging commonly experienced in fuel injected motorcycles. The unobtrusive vibration that was felt at lower engine speeds disappeared in this sweet spot, the beat of the engine reduced to a faint pulse barely discernable against the movement of the machine over the road. While running the engine at higher revolutions may have aided the aural orchestration of its exhaust, it didn’t add anything to overall performance, and worse, caused a dramatic increase in mechanical noise from the valve gear.

Despite the unseasonably cool weather during our test, the heat emanating off the rear cylinder of the Harley during heavy traffic became quite noticeable and had us wondering about the level of discomfort that might be experienced on a hot day. The engine was also fairly thirsty, returning an average 6.2 L/100 km (56 mpg) during a good variety of riding conditions. Heat and fuel use aside, the 96B was a capable and flexible engine, with adequate power in all traffic conditions, but felt best used in its intended role as a boulevard cruiser. Riding at a relaxed gait the Harley had a perverse affect on at least one rider, who claimed that it soothed frayed nerves and eased the tension of a long day at the office.

Jarring us back from this abstraction was the Harley’s gearbox; gears mesh to the sound of high-amperage switchgear being turned on—an authoritative clunk that suggested something catastrophic was about to happen. Since the Harley refused to leave a trail of transmission parts behind our fears were unfounded. The six-speed unit worked flawlessly, each gear change actuated by a light pull on the clutch cable and a small amount of pressure on the shift pedal. Sixth gear is considered an overdrive—as indicated by a green OD symbol in the speedometer—but we found it too tall for this type of motorcycle. At legal highway speeds the engine ran better in fifth, and accelerating to the point where the OD felt appropriate, the wind resistance was too close to the threshold of riding comfort. The other five ratios are well spaced for urban use.

Maintaining a form over function design philosophy has its costs. To keep the front wheel clutter-free, Harley equipped the Rocker with a single front disc. Although the four-piston caliper had better feedback and performance than most of the other single-rotor Harley’s we’ve tested, it still paled in comparison to the twin disc set-ups used on metric cruisers. How much additional braking force could be effectively exerted on the skinny, 90 mm 19-inch front tire is open for debate. It already had its hands full trying to coerce the substantial mass of the motorcycle (327 kg/721 lb) and its massive 240 mm rear tire to follow its lead. The anti-cruiser segment by this point will have been mumbling that front brakes are never used on these bikes anyway.

To mimic the look of a chopper’s exaggerated rake without the hindrance of steering-penalizing trail, Harley added an additional degree of rake through the Rocker’s triple clamps. Despite the effort, the effect of the 37-degree rake and 157 mm trail was directly felt. At very slow speeds the front wheel wanted to flop on its side, but once on the move it resisted directional changes. Further hindering manoeuvrability was the 240 mm rear tire which took a lot of persuasion to cant off its centre. Once leaned, the bike held the line it was given, but additional steering inputs required effort. Over time we adapted to the handling idiosyncrasies of the Rocker, but it’s a phenomenon that test riders need to remain wary of.

In contrast to the persona of a hardcore guitarist kicking over speakers and smashing his instrument on the stage, the Rocker’s name actually derives from a design element of the motorcycle. To satisfy the desire for the look of a hard-tail custom, Harley engineers conceived the Rockertail, a swingarm that disguises itself as part of the frame. The ruse works fairly well when the motorcycle is parked, but in motion everything aft of the rider moves in an up and down rocking motion, a detail that can only be enjoyed by those that watch you ride by. Leery of the effectiveness of this sleight of hand, we were surprised by how well the suspension worked. Although the 49 mm fork is too softly sprung (minimal application of the front brake sent the front end bobbing for apples), the hidden twin horizontally mounted shocks worked with aplomb, and for a cruiser the Rocker had a smooth and supple ride over bumps.

That the seat was plush also helped; Harley is adept at making comfortable tractor-style seats and ride comfort around town was never an issue. With a height of 698 mm (27.5 in.) the Rocket made a lofty impression and the machine disappeared beneath us. The only real detriment to the seat was on the highway, where windblast of 130-km/h threatened to shear us off our mount. Also higher than normal are the forward mounted pegs; although they offered a small gain in cornering clearance, they also furthered the issue of the rider as an aerodynamic liability.

For the majority of riders, the subject of Harley sidestands would never come up, but for one CC staffer they are a pet peeve. An integral tang on the top of the sidestand locks into a receiving notch when the stand is lowered, preventing the possibility of the motorcycle rolling off its stand. The problem, as one tester saw it, is that the system has a lot of play, causing the bike to wobble around as it was being lowered. Apparently the tester’s issue with this feature stems from a substantive paranoia about damaging a $25,000 motorcycle, and consequently he remained reluctant to let go of the handlebar until he was absolutely sure the bike wouldn’t topple over. That the sidestand also lacked an ignition cut-off that prevented you from riding away with it deployed was another matter.

Our riders unanimously complained about the turn signal switches but for different reasons. One tester complained that using the thumb of the throttle hand to signal a right turn while slowing hindered throttle control. The other tester didn’t have a problem with where they were located but with how they functioned. The soft-touch buttons didn’t give any physical indication that they had been properly pressed, and forced the rider to visually verify with each use that the signal had actually been turned on.

Since the complaint wicket has been opened, there was more: The mirrors were the half-view kind; half the view was of the road and the other half was of the rider’s arm. The tank-mounted speedometer, too, was angled directly at the rider’s groin, for reasons that we still can’t understand. But topping our list of aggravations was the ignition switch. The barrel-shaped key looks like the type used for bicycle locks, and is extremely difficult to pick, but the problem is that when it’s in the off position it falls on the ground unless you’re there to grab it.

Desiring to make carrying a passenger a possibility on a stripped-down design, Harley came up with a clever foldaway pillion for the Rocker. Tilting the rider’s seat forward allows the unfolding of a support bracket, which then allows a pillion pad (which is stored in a pocket on the bottom of the driver’s seat) to be mounted to the bracket. While the postage-stamp-sized pad would make a suitable perch for a supermodel, it was only good enough for half-a-cheek of dedicated CC pillion pad tester Uwe Wachtendorf, who claimed that he would require a dramatic change of lifestyle to fully come to terms with the seat.

We’re not sure why a stripped down Harley would retail with a loaded price, but if you’re really keen on saving a few thousand, you can opt for the base Rocker. At $22,259 it lacks many of the chromed fittings and colour matched parts found on the C model but is otherwise an identical machine. While the Harley-Davidson Rocker C doesn’t approach the performance summit of the cruiser genre, it does stand out on the merit of its design. A workhorse engine has tempered its inadequacies and its suspension is better suited to the roads of a decaying urban infrastructure than most other cruisers we’ve ridden. The Rocker certainly isn’t for everyone, but in motorcycling there is no right choice—there is only your choice.