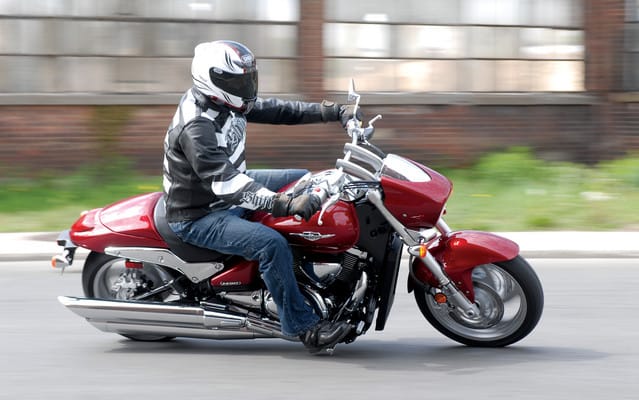 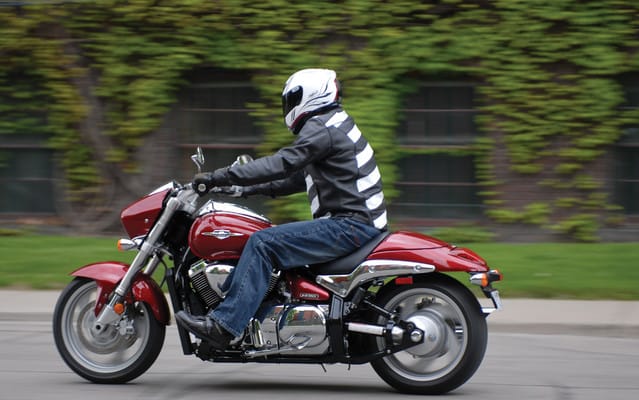 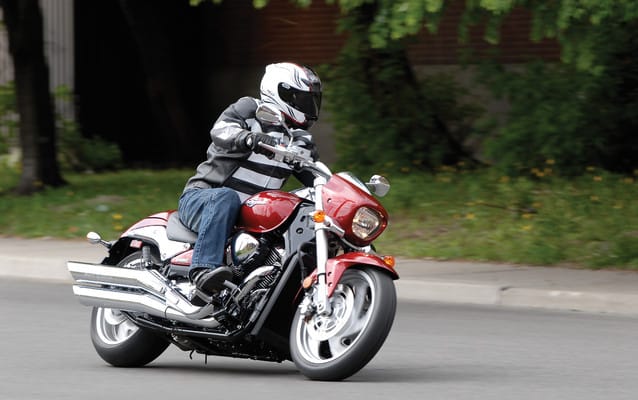 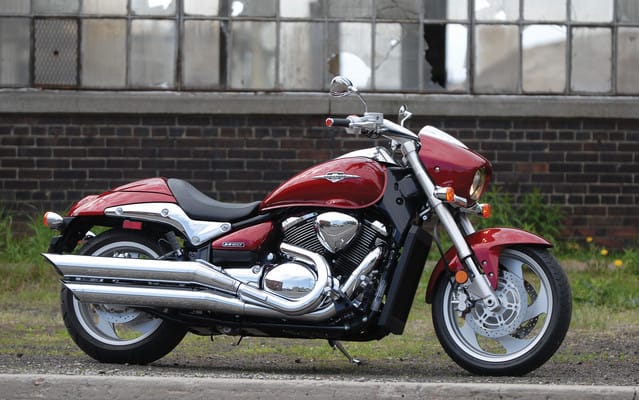 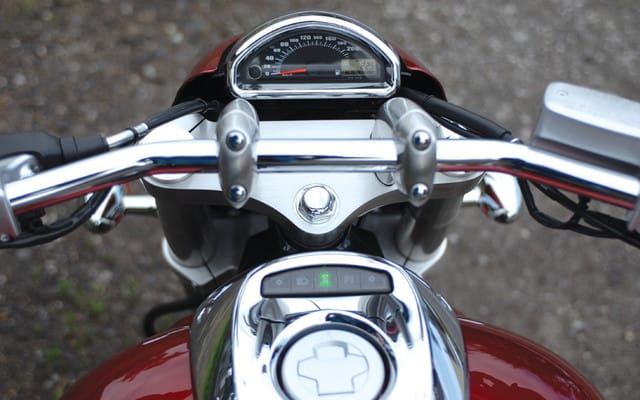 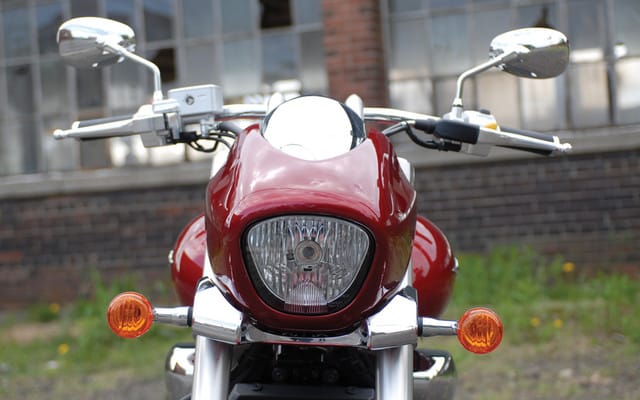 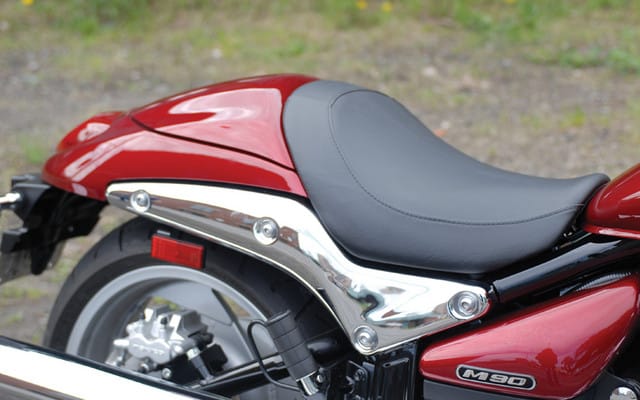 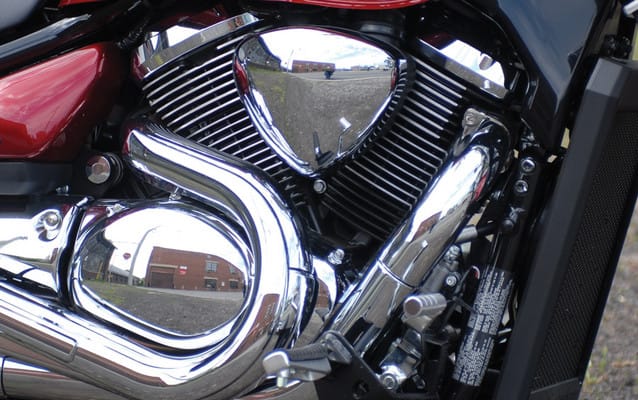 Suzuki cruisers combine the powerful engines that are its familial birthright with styling a little off the cruiser norm. Uwe Wachtendorf grabs a fistful of throttle and reports back.

Whenever I would meet a girlfriend’s parents for the first time, the old adage—warning that a first impression is a lasting one—would be rattling in my thoughts. It sometimes took them years to discover the deception. Impressions are just that: we’re never really being ourselves when we feel that we’re under scrutiny. Like most adages and wives’ tales, there comes a time when you discover they’re all a bunch of hooey. Impressions change over time, from moment to moment, and not until we have an intimate knowledge of the person do we really know who we’re dealing with. The editor of this magazine dares to wear Birkenstocks to the office, yet is a ferocious hockey player. So, you can never tell by appearances. Motorcycles are no different.

My impression of the new Boulevard M90 changed several times before settling in to the truth. It had started off well enough. Sitting in our garage, I was drawn to its striking design and thought it one of the better-looking cruisers on the market. Then I rode it. Memories of being doubled over a rowing machine at my local gym flooded back. True relationships are slow to develop, and even this second impression would eventually change. With a displacement of 1,462 cc, the M90 occupies the midfield between the larger and nearly identical M109 (1783 cc) and the more diminutive M50 (805 cc) in Suzuki’s power-cruiser range. As we would expect from a long-stroke engine, the new powerplant delivers impressive torque off the line – but exactly how much, we can’t say. Suzuki is another in a long line of cruiser manufacturers that refuse to provide output data for their engines, citing “too many variables” when pressed for a reason. Remarkably, without telling us what the M90’s engine produces, Suzuki is cheeky enough to claim class-leading torque and power-to-weight ratios. Maximum torque is claimed to exist at 2,600 rpm, or immediately after you open the throttle; there’s enough spine-compressing shove off the line to support that claim. Regardless of numbers or the lack of them, this engine pulls hard, belying its displacement and giving us the impression it’s larger than its actual size.

To satisfy emissions standards and improve fuel economy, dual spark plugs with variable firing orders are used in each cylinder. At low engine speeds the plugs fire simultaneously, but they alter to a staggered interval at high-load, high rpm conditions to maximize combustion efficiency. The expelled gases passing through the dual slash-cut exhaust create a raucous sound without resorting to a neighbourhood-abhorring volume. Offset crankpins and a staggered firing order help create the acoustic magic that prompts so many cruiser riders to keep blipping their throttles while waiting for a light to change. While there was a time when such diligent modulation of the fuel was required to prevent a bike from stalling, the M90 is part of the fuel-injected era, so you can give your wrist a rest — trust us, it won’t stall. Contrary to its muscular appearance and guttural exhaust note, the M90 has a very smooth engine. Like Marvellous Marvin Hagler wearing a pair of red velvet gloves, it’s a case of a powerful punch being hidden behind a slick presentation. To achieve this disposition the engine requires liberal amounts of throttle.

At low revs the bike shakes through the headstock and wants to wrestle the handlebar from your grip, however, the more throttle you apply the smoother it gets. To help keep unwanted vibration from the rider, Suzuki engineers made use of large flywheels, a primary drive damper located on the end of the crankshaft, and three rubber engine mounts on the steel tube frame. However, none of this helps with the jerky off-idle fuelling through the dual 42 mm throttle bodies, which use two butterfly valves in each; the rider controls one set while the ECU gets the other. We’re not sure what the ECU is up to with its allotted valves, but we know it’s the source of the malevolent behaviour. While the surging experienced during small throttle openings is an ailment common to many fuel-injected machines, it’s particularly pronounced on the M90, and something we also experienced with the C109RT we tested last year (CC, August 2008). The M90 encourages an aggressive throttle hand, and providing it’s opened in a deliberate manner, the fuelling is precise and responsive.

Until we had picked up on its aural cues, the willingness of the tachometer-free M90 to rev meant we bounced it off the rev limiter several times, which served as a gentle reminder that perhaps we should select the next gear. Despite constantly submitting to the urge to rally the engine hard through the gears, we recorded an average 5.6 L/100 km. A fair value given the fun it returned – we would be surprised if fuel economy was a high consideration for buyers of this segment. The shock-reducing damper mated to the M90’s wide-ratio five-speed gearbox is partly responsible for the light and relatively quiet shifting action, and our complacency in shifting gears. More than once we were caught out when down-gearing for tight first gear turns, letting out the clutch and expecting engine braking to aid in the braking manoeuvre, only to find we were in neutral and going in hot. For the same reason, there were also a number of missed shifts from first to second; shifting past neutral requires a greater effort than between the remainder of the gears in the box. Engaging first from neutral on a green light was also a cause of concern, as it took a great deal of rocking and hammering before the transmission would drop into gear.

Despite the use of a cable-actuated back-torque-limiting clutch, hard down-gearing would cause the rear wheel to squawk in protest. Although a shaft is used for the final drive, the M90’s ample torque wasn’t enough to cause any issue with shaft jacking. Unwanted up and down movement was instead traced back to the suspension, or lack of it. The inverted fork is said to allow 130 mm (5.1 in.) of travel, but it felt more like it had 1.30 mm. As a result the roads pounded us mercilessly, and one tester noted that during higher speed turns, the motorcycle would develop a low frequency wallow. The tubular steel swingarm is designed to mimic the look of a hardtail machine, its shock hidden from sight to complete the ruse. We are at a loss to understand why a modern power cruiser would want to ape such an antiquated appendage in the first place, instead wishing that a more usable suspension had been installed in its place. Limited ground clearance will mean that your 200 mm rear tire will be tarnished forever with chicken strips – that is until you wear out the peg feelers and peg ends – a lot. Aided in part by the OEM specific Bridgestones that provided good grip and feedback, the Suzuki turns well, its corner speed only limited by grinding parts. At much slower speeds, the M90 remained well balanced and easy to control in tight manoeuvring.

The only advantage to the folded over position the M90 puts its rider into would be better aerodynamics. A rider folded and stored on the seat like a Hungarian accordion produces less wind resistance than pilots of traditional cruisers, so we could comfortably ride at 130 km/h without needing to maintain a death grip on the handlebar. Reaching that flat, drag style handlebar when turning at the steering lock required even more body folding – perhaps this would be less of a complaint if we aging journalists had less stomach to try and fold over. Opposing the trend of lower and lower seat heights, at 716 mm (28.2 in.) the M90’s seat provides average to taller riders a comfortable reach to the ground, alleviating the humiliating sensation that you just stole the tricycle from the kid across the street. Controls are well designed; the switchgear is robust, well-spaced and easy to operate with leather covered sausage-thick fingers. The addition of a four-way flasher is a useful feature that we’re seeing installed more often on new models. The 60/55 watt headlight provides ample illumination, and is also controlled by a passing switch that triggers both beams simultaneously.  Surprisingly, the mirrors actually provide a view of the road you’ve left behind, and remained blur-free throughout the rev range.

We had mixed feelings about the dual-level instrumentation. Split between a tripleclamp-mounted speedometer housing and a set of indicator lights incorporated into the tank nacelle, the design was aesthetically pleasing, but causes your eyes to double dart between two separate sources of information. We would prefer to have all the instruments in one place to allow everything to be checked with one quick glance. Also problematic were the closely spaced incrementation lines of the speedometer that made it difficult to read an exact speed without taking a longer look. A small LCD housed in the speedometer displays the remaining fuel level in a bar graph, flashing the last bar when the tank is about to run dry. In the same window you can switch between the odometer, two trip meters, and a clock. Simple stuff really.

A definite advantage of a cruiser built by a company with a reputation for fast sport bikes is that it will come with decent brakes. While the full-floating dual discs with two-piston calipers out front don’t have the same ferocious bite of a sport bike’s, they are more powerful than what a lot of the competition has to offer. The rear brake pedal will likewise stop the big rear tire dead if stepped upon hard. Missing from this equation is ABS, a feature that by now should at least be available as an option.  The M90 is a lot of motorcycle for its $13,500 sticker price. Buy one and you’ll feel like you bought a Happy Meal – the one that comes with a free toy.

There’s enough chrome to keep the wax and polish contingent happy, but not enough to discourage the addicted accessory shopper. It’s a well styled machine: bold and meaty, a symbiotic flow exists from the front fender all the way to the rear light. Ours came equipped with the optional tailsection cowl instead of the standard pillion pad – just the way we’d order it. The melding of a sport bike character with a cruiser’s facade may seem at odds – certainly not to everyone’s liking – but this is not the type of cruiser for those frequently taking a relaxed sojourn to the countryside. The M90 loses little to its larger stablemate and will satisfy those who never tire of full-throttle operation.