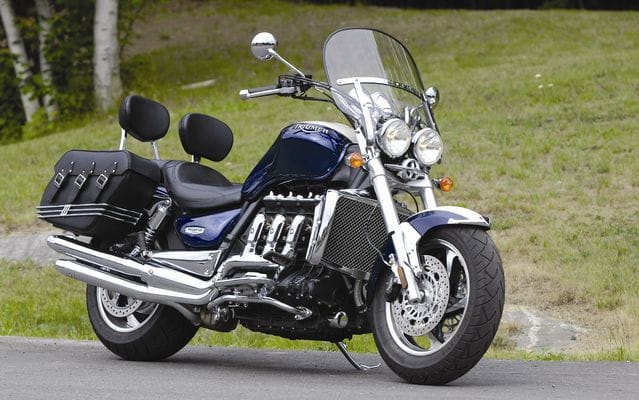 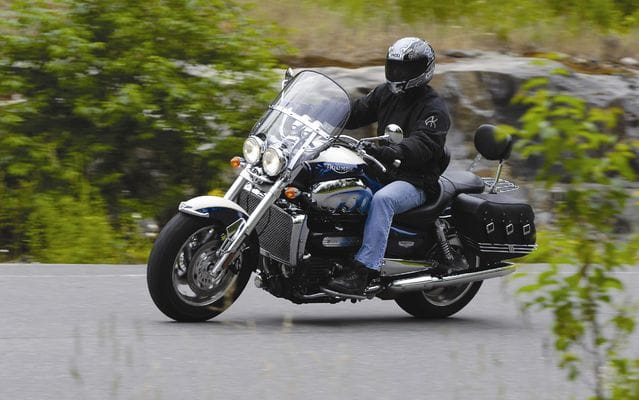 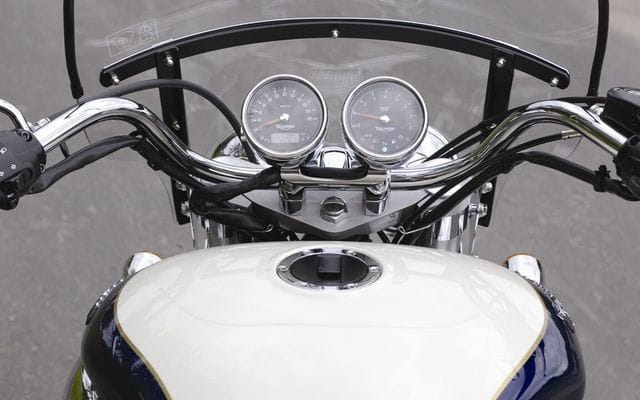 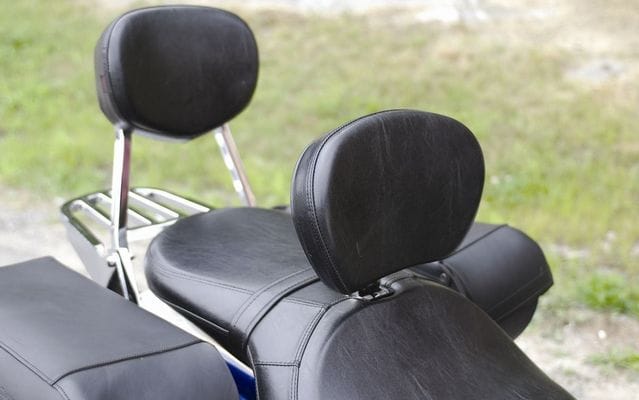 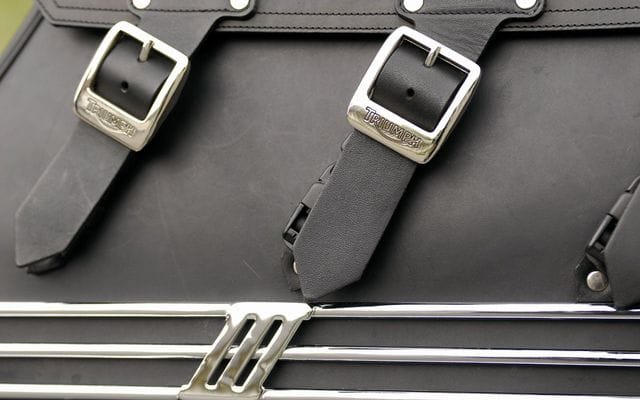 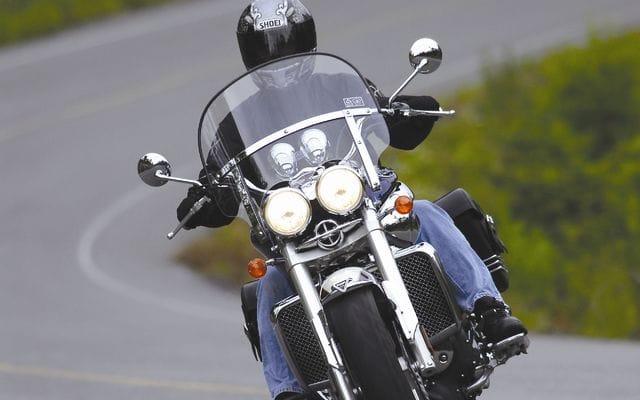 Sixty-eight pound-feet of torque. That’s about 40 percent more than the maximum produced by a modern 600 cc supersport machine. It’s also what the Triumph Rocket III Classic produces at idle. There’s no mistaking what the Rocket III is all about: its engine. At 2,249 cc, it’s the largest-displacement motorcycle available by any manufacturer aside from Boss Hoss, which unlike Triumph, doesn’t produce its own engines, relying instead on Chevrolet V8 crate engines for power.

The Classic offers a different riding position than the standard Rocket III did, with floorboards replacing the footpegs, and there’s more chrome and a two-tone paint scheme. Our accessorised Classic came with a windscreen ($600), touring saddle ($444) with adjustable rider backrest ($204), passenger sissy bar with luggage rack ($480), leather saddlebags ($960), and chrome saddlebag rail ($180).

The Triumph’s massive inline triple takes prominence in the bike’s steel chassis, something that is immediately noticeable when you stretch your legs wide to straddle the machine. The Rocket III is built for plus-sized riders, and reach to the handlebar, although not too far forward, is wide, its fat handgrips nearly slipping out of reach at full lock even for tall riders, and the adjustable clutch and brake levers, which at their nearest, are a moderate reach even for large-sized hands. The 24-litre fuel tank swells like a beer drinker’s gut flattened by gravity, as it extends forward and upward, dominating the cockpit view. The entire machine bulges away from the rider in all directions, giving the distinct impression of sitting in, not on the bike. The seating position is relaxed, with floorboards more rearward and offering various leg positions compared to the forward-mounted footpegs on the standard Rocket. They also don’t protrude as far outward, providing added cornering clearance, contrary to what is expected on floorboard-equipped machines.

Someone contemplating a Rocket III probably won’t pay too much attention to the spec sheet, especially when considering the weight of the machine, which is a claimed 320 kg (704 lb) dry. Add fluids, gas and accessories you’re pushing 800 lb. The Rocket carries the bulk of its weight low in the chassis, but it still takes a fair amount of leg strength to lift the mastodon off its side stand. Once rolling, the bike loses some of its heft, its steering getting progressively lighter with speed, but the weight doesn’t melt away like on Honda’s Gold Wing.

On moderately twisty roads, the Classic surprises with relatively neutral steering, despite its 240 mm-wide rear tire. It only exhibits a tendency to stand up from a lean in slower corners, or when turning from a stop, though it is manageable. The biggest hindrance to both handling and comfort is its short-travel suspension, which is harsh. The Rocket III proved a handful along some of the rougher roads through Ontario’s picturesque Muskoka region, repeatedly jarring the backbone and hands. On smoother roads, it was a kick to ride, especially when rolling on the throttle along the straight stretches, where the engine’s massive torque fervently pulled the machine forward, barely noticing the full load of luggage and passenger. Passenger seating, although ergonomically comfortable, was hampered by an unseen nub in the seat base that dug into the passenger’s backside, though this was the accessory seat, and it’s unknown if the stock seat had this same problem. On the open road, the Classic rockets comfortably, the only hitch being the excessive buffeting produced by the accessory windscreen, though it proved useful in heavy rain, deflecting the pea-sized raindrops from both rider and passenger. Curiously, our windscreen had a rubber trim around the edge, which was less distracting once removed.

Engine tuning hasn’t changed since the Rocket’s introduction in 2004, and despite more than adequate output of 140 horsepower, what really makes this triple a monster of an engine is its torque, which hits its peak of 147 lb-ft at just 2,500 rpm. Rolling on the throttle produces a forward rush unlike any other production motorcycle. It’s not as frenetic as an open-class supersport, but the punch just off idle tugs your arms straight and flattens your buttocks into the seat hump. The powerband is board-flat, which is deceptive, because acceleration isn’t progressive, the bike chugging forward locomotive-like. This engine would make a great platform for a real touring bike, like a BMW K1200LT or a Honda Gold Wing, with creature comforts like heated grips and seat, full fairing protection and a complete sound system. The sound system could be omitted, however, as it would drown out the luscious sound produced by the triple, one of the most appealing sounds in motorcycling.

Shifting gears is only necessary when accelerating from a stop, because once the Classic is in top gear it’ll lug down to 50 km/h and pull away smoothly as if an automatic. The gearbox is industrial in feel, with a deliberate stab at the heel-toe shifter meshing massive cogs together, and clutch pull is on the firm side. This confirms the heavyweight Rocket as a machine better suited to rural roads and open highways, because aside from busting a sweat trying manoeuvre the beast slowly through congested city traffic, engine heat, especially from the right-hand side, will make you consider buying stock in Gatorade.

On any other machine, two 320 mm front discs mated to four-piston calipers would be almost too strong, but on the Rocket III, they’re just adequate. Stopping power is strong, but lever effort is on the high side, and the bike’s heft makes it want to keep on rolling. Helping braking is a strong rear brake, which would be prone to lockup on any other bike, but with the added grip of the Rocket III’s fat rear tire it slows the machine considerably.

The Rocket III Classic isn’t everyman’s motorcycle—or everyman’s cruiser for that matter. If you order fast food in extra-large portions, shop at Mr. Big & Tall and suffer from megalomania, you’ll feel right at home on the Classic. And if you are the Rocket III type, you might want to consider the Touring model, because at just $1,000 more than the Classic’s $18,999, you’ll get hard saddlebags, a windscreen, a touring saddle and sissy bar, and even more torque—154 lb-ft at just 2,025 rpm—and that should be enough to satisfy even the severely power hungry.