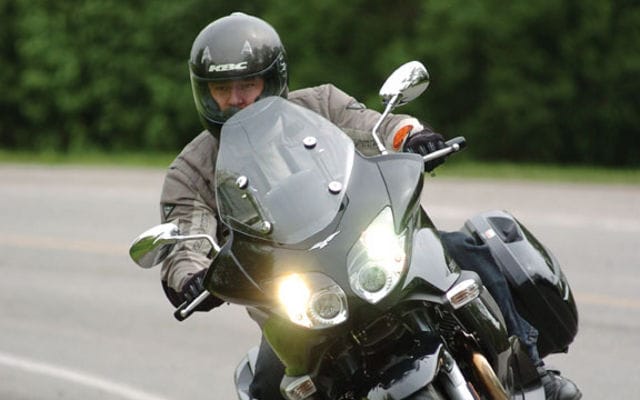 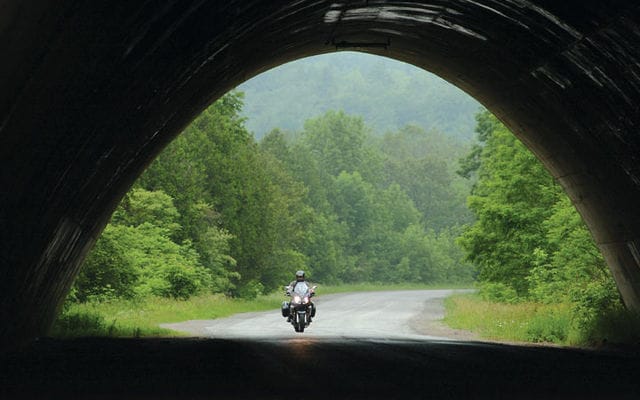 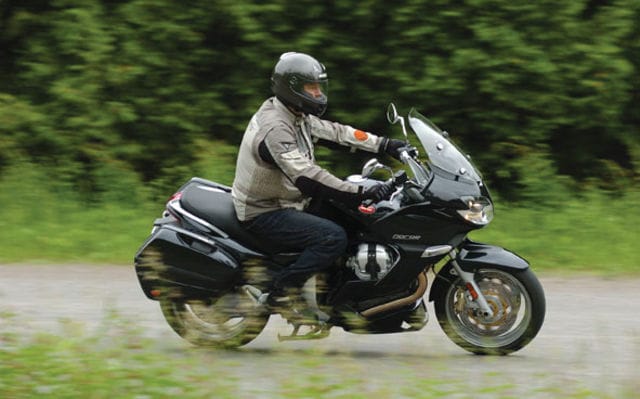 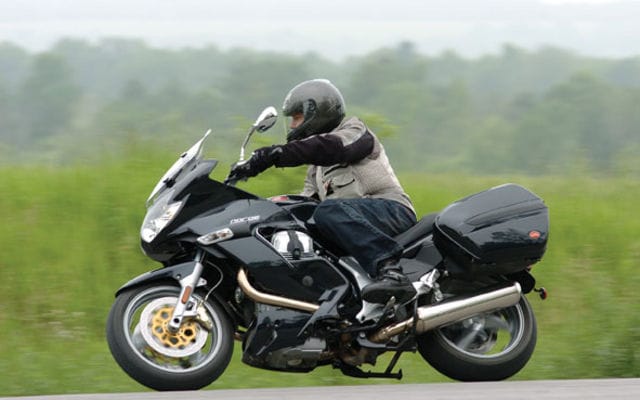 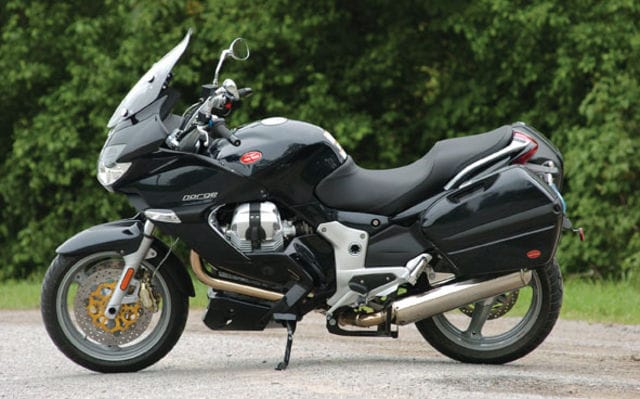 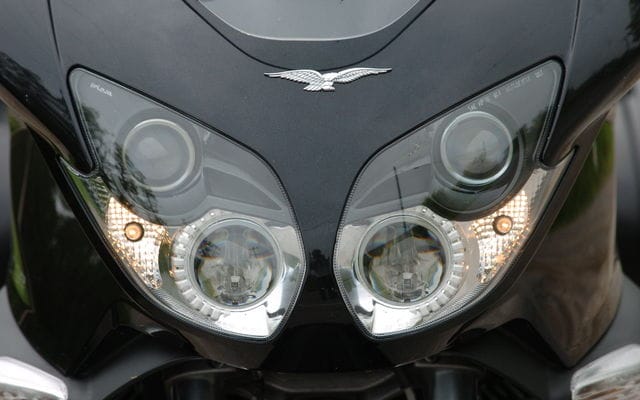 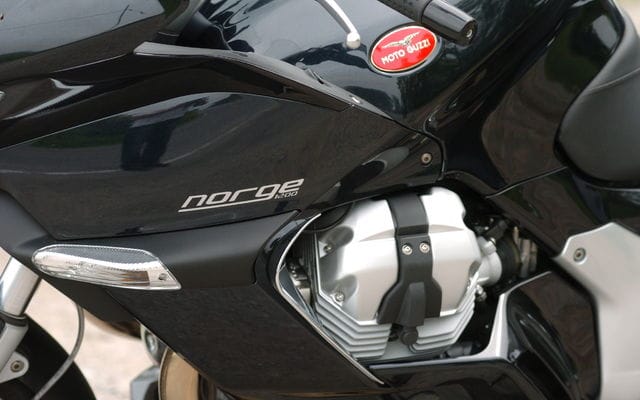 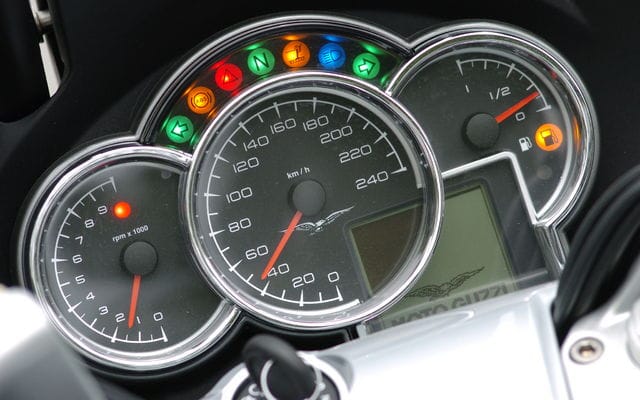 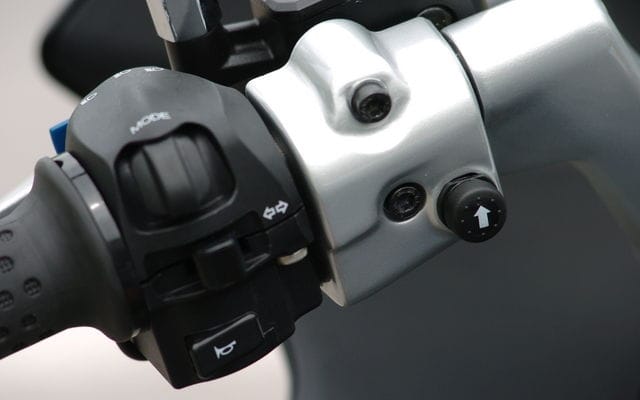 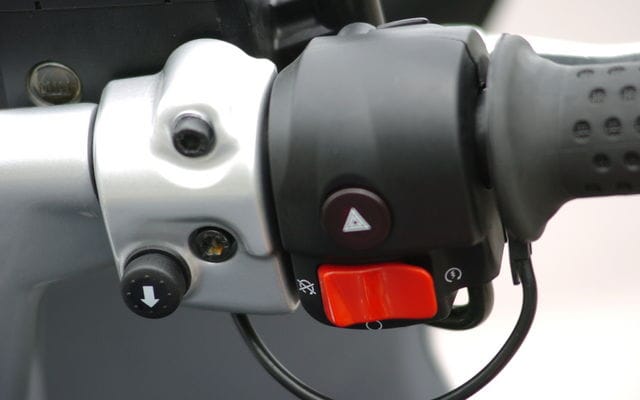 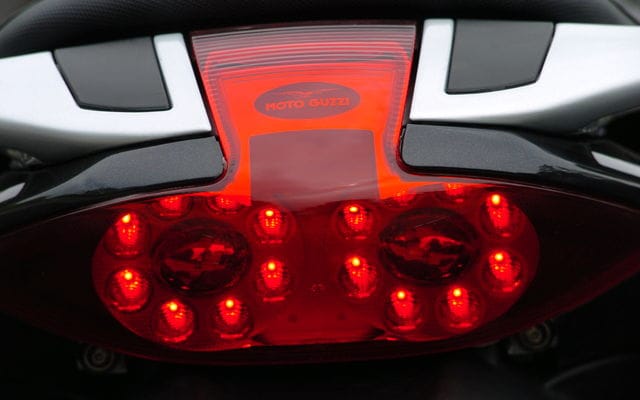 Italian Passport  Despite an italian passport and a specification sheet that would lead you to believe that its nearest competitor would be Ducati, it only takes a few minutes of riding Moto Guzzi’s Norge 1200 for the uncanny resemblance to BMW’s Boxer-powered motorcycles to surface. Where modern Ducati twins are aggressive—eager to rev and sporting by lineage—the air-cooled transversely mounted V-twin of a Moto Guzzi has a relaxed boxer-like gait, and ever since we rode the naked Breva (on which the Norge is based) we believed it to be just saddlebags and a windshield away from becoming a charming sport-tourer. But after picking up the Norge something was clearly amiss; the near-perfect fuelling of the Breva was gone, replaced by an engine that surged at idle between 1,200 and 2,000 rpm, and after nearly dumping the bike while making a parking lot U-turn when the engine revved unexpectedly, we’d had enough—back to the distributor the Norge went.

A few days later we picked up a machine that felt entirely different. Low-speed fuelling—often a contentious issue with today’s ultra-lean fuel-injected motorcycles—was fabulous, the problem traced to an improperly vented fuel tank. But then just as our confidence in the machine had been rehabilitated, the starter refused to crank the engine over. After repeated attempts to bump start it, we checked the battery terminals, one of which was loose. Problem solved. Then we stuffed the saddlebags with clothes and a toothbrush and hit the road. With the fuelling woes behind and a clear road ahead, we quickly discovered one of the most poorly designed features on any machine we’ve tested.

Wanting to lower the windshield for more airflow on a humid day, it was necessary to access a button on the right handlebar switch block, but it was too far inboard to reach with the right thumb, which meant reaching the left hand across to the right end of the handlebar, an unsettling manoeuvre in six lanes of 120 km/h traffic. To raise the screen meant pushing another button, this one on the left switch block, though it, too, was unreachable without removing hand from grip. It may seem pernickety to complain about a poorly placed windshield adjustment switch, but once accustomed to adjustable screens, they’re perpetually in motion; down to chase heat while slowing to pass through a town, up to divert dust kicked up from a semi or to ride out an unexpected shower. One test rider, speculating on Guzzi’s motivation for such an oddly designed control, suggested that perhaps engineers wanted to out-weird BMW’s wonky turn signals, where separate left and right mounted turn switches are cancelled by a third switch. If that was their goal then they were resoundingly successful.

Lest you think we are consumed by negativity, we are happy to report that once adjusted, the screen is effective, surprisingly so given its relatively small size. Even at 140 km/h, the high end of touring speeds for those who wish to avoid arrest, windblast was entirely liveable. Adjusted to just below eye level—our favourite setting while at speed—it was possible to ride for hours without wind-induced fatigue.

The Norge’s riding position was a mixed blessing for certain testers. All agreed that the peg to seat distance was more on the sporting than the touring side, but debate centred on handlebar placement. A columnist for this magazine—the one with the unpronounceable name—claimed that the handlebar was too far forward and too low, but Neil Graham, a man of reason and logic, claimed that it was ideally positioned.

While willing to potter along uncomplainingly at legal speeds, we could not restrain ourselves from thrashing the 1,151 cc 90-degree V-twin. Claimed horsepower is 95, modest for a machine with a claimed dry weight of 246 kg (542 lb). But there is more to a good engine than merely its lack or excess of power, and the inspired induction honk and meaty torque entertainingly haul you down the road. The engine smoothes by 3,000 rpm and though peak torque of 74 lb-ft arrives at 5,800 rpm, in practice you ride the wave of torque between 3,000 and 5,000 rpm. Shifting is nearly flawless: light, precise and positive, and the ratios are not absurdly tall (are you listening, Ducati?), which allows all six gears to be used at realistic speeds. The only reluctance to accept the next gear was when we held the throttle to the stop, not the sort of use the Norge will typically receive. The Norge lacks the power of BMW’s Boxers, which are close to 100 rear-wheel horsepower, but it is, to us, the more entertaining engine.

Had the windshield control not received the bulk of our ire, we might have been more vociferous in our dislike of the instruments, or, we should say, the digital component of the instruments. The analogue tachometer and speedometer are classically simple and easy to read, starkly contrasting the digital display stuffed in the lower right of the gauge cluster. Poorly positioned and fiddly to operate, its legibility was poor day or night. Operating the standard heated grips via the digital display, for example, was much more troublesome than had it come with a simple rocker switch on the handlebar.

What makes the sport-tourer appealing is that it addresses, for many of us, our motorcycling reality. Most riders probably don’t live near fabulous roads. They may be an hour away, but sometimes they’re a province distant. This makes a fresh change of clothes a necessity, which means hard saddlebags. The soft, throw-over saddlebag is a horseman’s holdover that migrated to motorcycling, but not even Secretariat blitzed a series of corners at 120 km/h—if you’re going anywhere you need all-weather luggage that you can lock and forget. The Guzzi bags worked well and never fell off, which is the litmus test for any luggage, but we kept forgetting to unlatch an extra hook at the rear of the bag, which is presumably a safety latch for heavy loads.

Since some CC staffers have swollen heads (yes, both figuratively and literally), we were delighted to see the saddlebag swallow Neil Graham’s XL-sized Shoei, which gives him one less thing to complain about. For oversize loads, well-placed grab handles allowed a vintage 1981 Bang & Olufson reel-to-reel player to be strapped to the tail section.

At its best the sport-tourer allows us to reach entertaining pavement without having knocked the rider so senseless during the journey that they’ve lost all enthusiasm when they arrive. On this count the Guzzi is good. The relaxed vibes of the engine allow the highway to be efficiently disposed of, and the supple suspension is a good combination of compliance for the bad stuff while remaining taught enough for the curves. A motorcycle of Italian origin that couldn’t carve corners with gusto would be a travesty, and the Norge scores well on most counts. If you’re really on the boil, left-handers must be taken with care, as the centrestand tang hangs far too low.

Opinions on the styling were mixed, which gave credence to our theory that Italian designers lose confidence with motorcycles that have touring capability. Just like Ducati’s discontinued ST-series, the Norge’s lines are workman-like, but stop short of beautiful, and we almost missed the quirkiness of the BMW R1200RT. The Norge is not a motorcycle that you’d ever hate because of its looks, but it’s not a motorcycle that you’d desire for its styling, either. But not everyone was nonplussed by its lines. Uwe Wachtendorf rhapsodically described the taillights as looking like twin Gatling guns surrounding a pair of Faberge eggs.

While it’s easy to dislike bad motorcycles, it’s much harder when tantalizingly good machines could have easily been made better. A Moto Guzzi test rider should have slammed their fist on the designer’s table and demanded a fix for the windscreen control, a redesign for the centrestand and a legible dash. As it is the $18,995 Norge is a good motorcycle, and it comes with standard ABS, a two-year warranty and 24-hour roadside assistance. But just as a foul glass of wine can sour a fabulous meal, so can minor faults lessen the appreciation of an otherwise fine machine.

The biggest problem with Moto Guzzi’s Norge is that it isn’t the only quirky air-cooled twin in the Gran Turismo class, and with a price just five dollar’s off BMW’s R1200RT, it faces tough competition. The BMW has more power, weighs less, handles better and has a highly functional fairing. But it’s also painful to look at—a result of lab-coated Germans building a motorcycle around its function. Fortunately, there are passion-filled Italians who refuse to ignore form, so yes, the Norge is aesthetically more pleasing and it’s easy to appreciate the attention to detail in its design.

The Norge felt built for a rider much shorter than my six-foot-one height. Footpeg and handlebar location made for an awkward riding position, not ideal for a bike meant to cover great distances. Then there is the Norge’s engine, an unusual twin that sabotages relaxed touring with its need to be kept spinning, openly protesting whenever a rider becomes lax with gear changes or tries to make a quick pass from low in the rev range.

A few changes to the Norge would turn it into a tempting proposition, but in its current state of development I’m far more drawn to the other motorcycle that comes with goofy controls. — Uwe Wachtendorf

This month I’ve fallen behind, with too many motorcycles to test in too short a time. So when I sail past my small-town coffee shop into open country and leave my mounting obligations behind, it’s telling of my feelings toward this machine. But as much as I like it, for $19,000 you can have your pick of just about any motorcycle made, and in a category with so many worthy machines, minor flaws can be deal breakers. While it’s easy to understand why cruisers are uncomfortable—designers are restricted by an aesthetic that dictates low seat heights and slammed suspensions—I’m at a loss to explain why Guzzi engineers couldn’t come up with a more legible digital display or a windscreen with a sensible operating control.

What’s unfortunate is that the hard work has been done. The Norge rides well, feels good and has an engine suffused with character, and an owner may be thrilled with their purchase, but before you buy, just make sure that the issues that irritated us won’t irritate you.  — Neil Graham