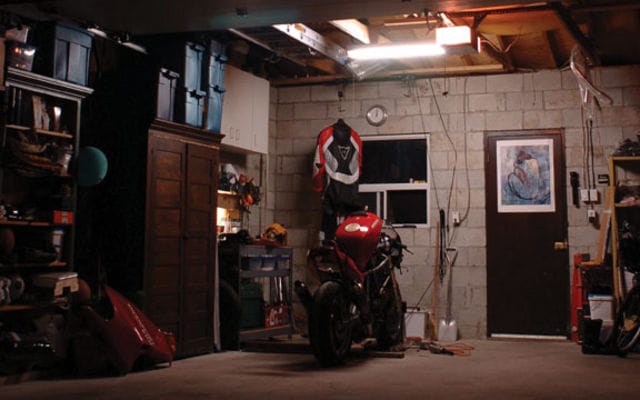 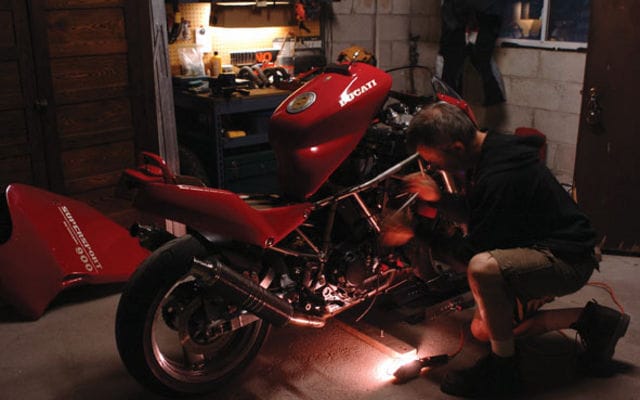 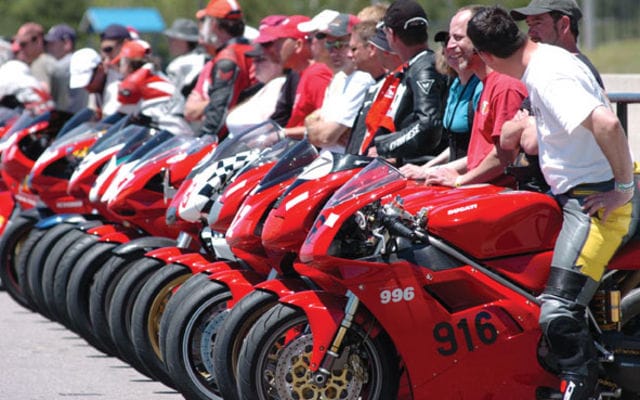 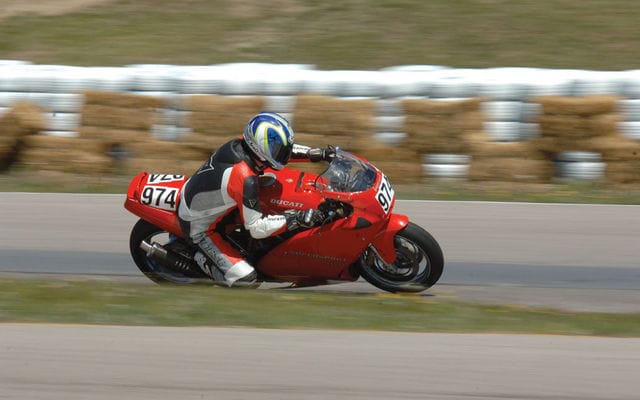 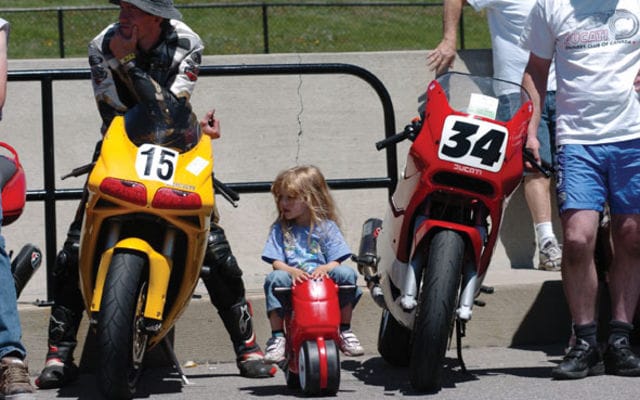 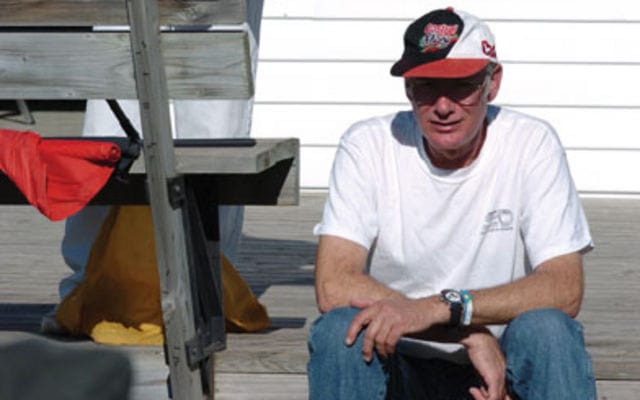 Rage against the Machine

Maintaining a Ducati requires an expert’s care, so when shade-tree mechanic Neil Graham butts his head against Italian engineering, even he knows he’s in too deep.

It has become dark outside and my mood darkened with the skies. I am attempting to change the camshaft drive belts on my Ducati, a simple task, so everyone tells me, but I can’t get them off. First I slackened the tensioner adjuster bolts, and then, when that didn’t allow enough slack for the belts to slip over the pulleys, I removed the tensioner apparatus entirely, but still I can’t get them off. The day after tomorrow at 6:00 in the -morning I am to be on my way to the Ducati Owner’s Club of Canada (DOCC) annual Mosport rally, and my frustration has turned to rage. Mostly I blame myself for buying an Italian motorcycle, but in my irrationality I need to blame someone else, too. Who better to pester than DOCC president Rick Covello?

When he answers the phone, at an hour a little too late for a stranger to be calling, Covello is calm and pleasant and immediately I regret my combative tone. It is not his fault that I waited too long to prepare the bike. In fact Covello is alarmingly sanguine for a man in a worse position than I am—his 750 Ducati, that he hopes to ride on the weekend, is without its cylinders. “They can be a little difficult to remove,” Covello says of the belts, then asks if I’ve removed the tensioner apparatus. I have, I say. “Just keep at it,” he says, in a tone identical to that of The Friendly Giant.

Calmed, I return to the garage and stare at the bike. I could just leave the old belts on and change them later, but the service manual has a warning for people like me, italicized for emphasis: The consequence of a belt failure will be extensive engine damage and likely loss of control of the motorcycle. I imagine a seized engine at top speed on Mosport’s ultra fast straightaway, so before I talk myself into keeping the old belts I impulsively slash them off with a utility knife. Problem solved, belts removed, temptation resisted. I will not become one of those enthusiasts that we all profess to loathe but have, from time to time, become—a slapdash owner.

Every motorcycle follows a similar arc throughout its lifetime—from coddled new machine to adequately maintained workhorse to neglected veteran. The decline begins as innocently as an owner using a mismatched fastener to replace a lost bolt, and ends with gaffer tape plastered over escaping seat foam and blown gaskets oiling down engine cases. The deeper I delved into the Ducati the more little things I found. Loose wiring, awkwardly routed -throttle cables and fasteners missing washers slowed my progress, and two evenings were lost digging out solidified chain lube from around the front sprocket.

The previous owner of my ’93 900SS was going in the opposite direction that I was. He wanted something newer and faster, and with a late model GSX-R750, one of the best modern sport bikes, he got both. I was looking for something more primitive than the flow of modern test bikes that I usually ride. I wanted something that I could tear apart, fiddle with, screw up, and, yes, become enraged with. Somewhat perversely, perhaps, I enjoy standing over a motorcycle struggling to find control so that I don’t beat the fuel tank with the torque wrench dangling from my fingers. It is a challenge to find civility at these moments, and I’m a better man having found it. I have not, yet, attacked a motorcycle that I’ve owned, but I’ve ripped caps off fuel tanks and screamed obscenities inside until overcome with fumes.

Another reason that the previous owner was willing to let the Ducati go was because of its peculiar maintenance requirements. Toothed cam belts are standard automotive practice, and, as everyone keeps telling me, simple to change. More complicated is the adjustment of the Desmodromic valve gear, which jettisons springs in favour of a system that positively opens and closes a valve. Advantages, Ducati faithful insist, are twofold: power is not robbed by an engine overcoming valve spring tension and valve float at high revs is eliminated. Both claims are dubious. Japanese engines that rev 5,000 rpm higher than a relatively slow-turning Ducati twin do just fine with conventional valve springs, and though no one talks about it, Ducati valve gear has springs, I know because one is preventing me from aligning the timing mark on the camshaft belt pulley.

When I align the mark on the pulley with the mark scribed on the engine, tension is more than finger strength, and the valve pushes the cam lobe, and the pulley, away from the timing mark. How can this be, how can a spring-less system have a spring?  While not a conventional-looking coiled valve spring, in the parts manual there is a spring (for non-believers the part number is 061992150), so I started snooping around. One person laughed and changed the subject when I asked what the spring was for. Another said that is was just to take slack out of the mechanism. Another said that he rebuilt his engine, forgetting the spring, and that it wouldn’t idle below 2,000 rpm.

It is midnight and I have given myself an hour to reinstall the belts. At 1:00 am I’m going to bed. Growing a third arm with another set of fingers I wiggle and coax the belt over the pulleys while jamming an arthritic finger between the housing and the pulley to keep it from moving. It works. Then I do the other cylinder, and in my euphoria from conquering the first cylinder I vanquish the second belt in 15 minutes. Slowly I rotate the engine a half-dozen times by hand, to ensure that timing marks remain aligned and that a valve doesn’t plunge in despair into a piston. I turn the petcock on, repeatedly twist the throttle so that the accelerator pump on the carburetors squirts fuel into the combustion chamber, and then turn the key. I push the starter. Thump, thump, thump, boom. A motorcycle is never louder than after midnight in a residential neighbourhood, and after 30 seconds I shut it down. I had hoped to adjust the valves before going to Mosport but each time I read the description in the manual a sharp pain pulsed behind my eyes. It can wait. I’m going to bed.  I’ve always wanted a Ducati. It’s certainly not that they’re better than other motorcycles—for much of its history they’ve struggled with quality control and producing enough to be financially viable—but for decades they’ve made bikes that I’ve wanted to own, and at $4,000, depreciation finally shrunk value to my level.

The 1991-98 Super Sport series is an anomaly compared to today’s narrowly defined motorcycles. Not a focused sport bike in the modern sense, it is neither standard nor sport-tourer. It is best thought of as an engaging street bike that’s best when ridden at a quick, though not frantic, pace, and the racetrack reveals its limitations.

On my first lap of Mosport, just as I’m warming up new tires, I nearly centre punch a 1098 at Moss’ corner. As I lean my 900SS over for the exit to the double-apex corner, the exhaust header grinds against the pavement and lofts the rear wheel from the ground, sending the bike into a lurid slide, prompting me to mind my lean angle for the rest of the weekend.

With nearly 60,000 kilometres the suspension is flaccid, and even with compression and rebound adjustments cranked up damping is virtually nonexistent. To compensate I boost preload until it handles like a hay wagon without payload. Aftermarket pipes are available to address cornering limitations and soon the fork and the shock will come off for fettling. High-mileage motorcycles of this vintage, especially when they’re Italian, are like renovations of century-old homes: they remain a work in progress for perpetuity.

When I ask Rick Covello what his platform was when he ran for president of the Ducati Owner’s Club of Canada I catch him off guard. “Oh,” he says, pausing, before rummaging through back issues of club newsletter Motodesmo to see just what he’d promised back in the winter of 2007. “I wanted to add a fourth newsletter and to make club events more informal and relaxed.” He may not yet have achieved the former but he seems to have had success with the latter.

2008 is the 30th year of the club and 20th year of its Mosport rally. Track days are now a firmly established element of motorcycling, but back in ’78, when a member of the nascent club proposed renting the track at Shannonville so that “we could ride them as they we intended to be used,” track days for non-racing events were unknown in motorcycling, at least according to Covello. “We were the first,” he says.  Membership has blossomed from the original handful in the 1970s to over 700 today, paralleling Ducati’s quiet entry into the mainstream of motorcycling, and the makeup of the membership has changed, too. “It used to be all 20-year-old guys starting out in life,” says Covello, “anybody with money bought a sports car. In those days we all did our own mechanical work, but the median age of club members is much older now, and there is more money around, at times the club feels more like a business.”

While Covello laments the folksy atmosphere of days past, he’s wise enough to know that the company could not have limped on as it had. “From ’75 to ’85 only 14,000 900SS models were made, and it was their most popular model. It wasn’t until the 1990s 900SS that Ducati made its first true mass-produced motorcycle. They wouldn’t be around if they still had the old production numbers, and I’m really glad they’re still here.”