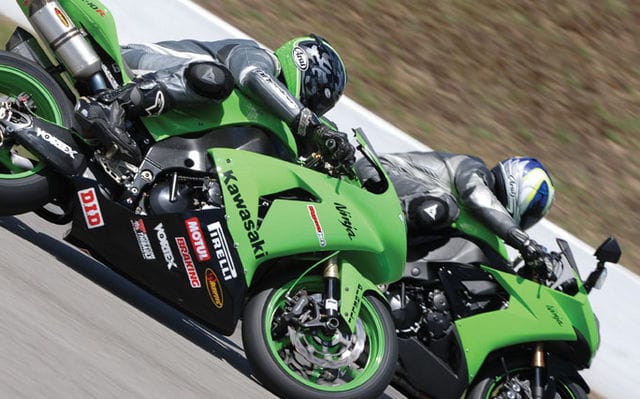 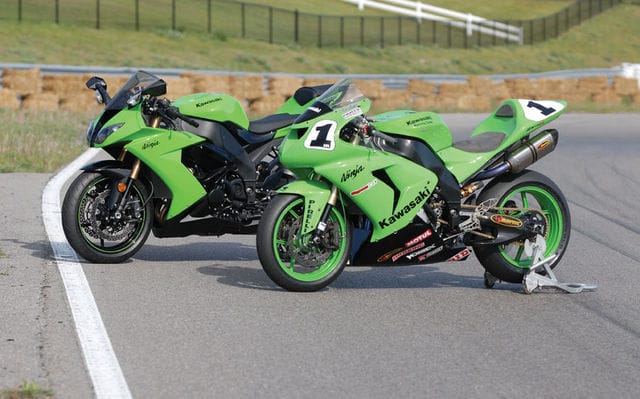 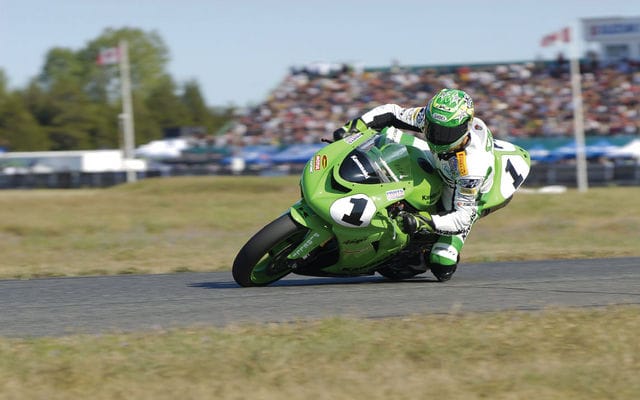 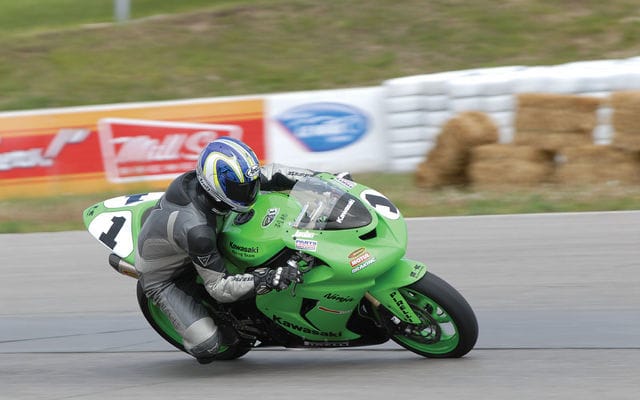 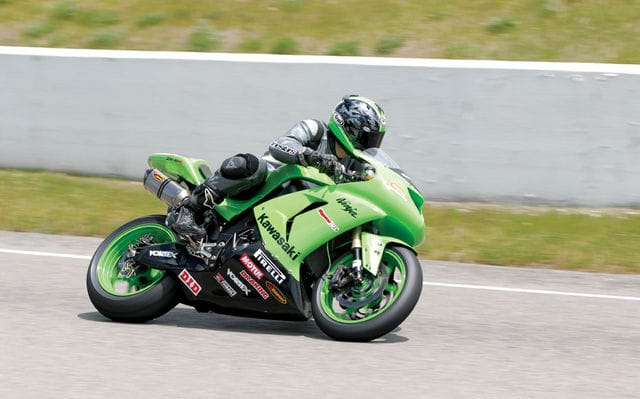 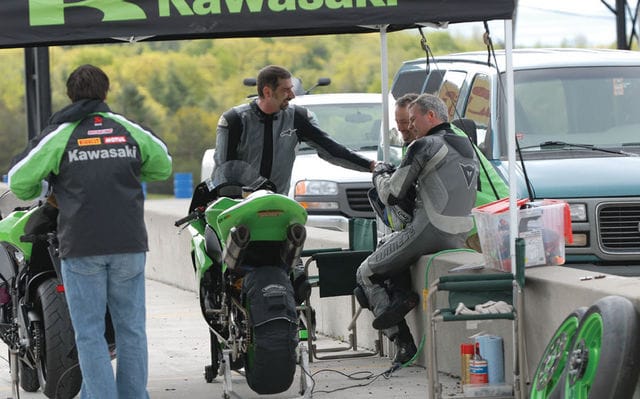 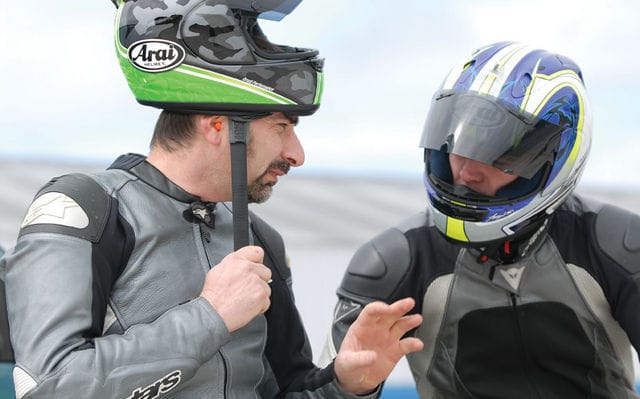 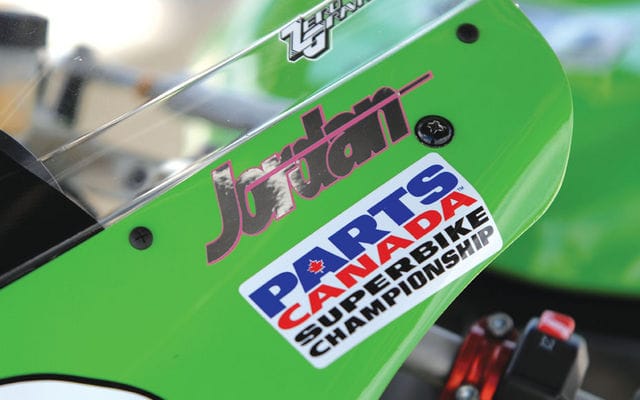 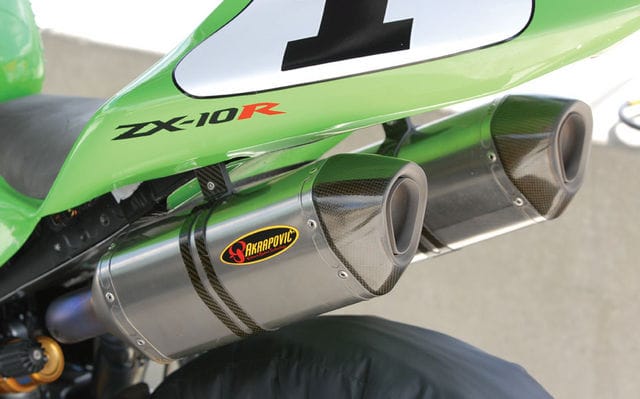 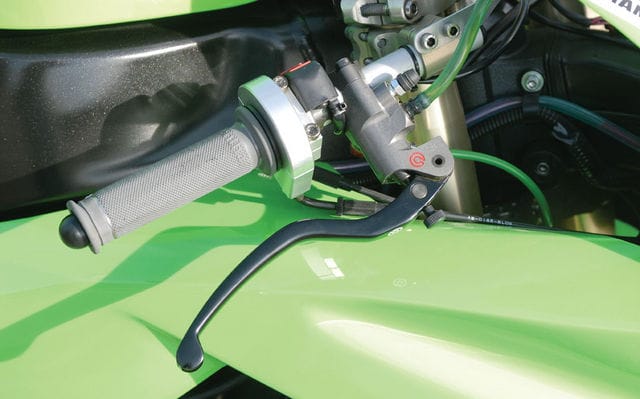 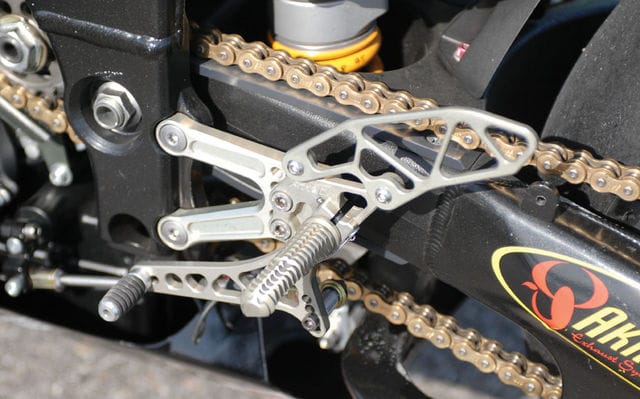 What’s the difference between a stock superbike and the Parts Canada title-winning superbike? We find Jordan Szoke’s Canadian Kawasaki Motors ZX-10R to be a little bit more than even we expected.

It is an embarrassing moment. Mulling about waiting for the Pro-6 track day at Mosport to begin, I bump into a rider who recognizes me from the pages of this magazine. “What are you riding?” “A Kawasaki,” I say, but he’s not satisfied with the brevity of my answer, so I continue, saying, as casually as possible, “Jordan Szoke’s 2007 Parts Canada Superbike Series-winning ZX-10R.” The man, whose name I never catch, shakes his head. “Who gave you the keys to the empire?”

This is my first ride on a real road-racing motorcycle. Other than a lightly modified Turn 2 GSX-R 600 that I raced at Mt. Tremblant last year, the fastest motorcycles I’ve ridden are the current crop of stock Japanese 1000s. Modern sport bikes are remarkable machines, pushed ahead by relentless engineering and condensed production cycles, where new eclipses old in as little as 24 months. The next technological threshold for consumer machines will likely be traction control, which Ducati’s 1098R is the first to use, but Szoke’s bike has none of that, and in 10 years time machines like this may be held up as the last of the fire-breathing demons, with no computer to mediate between an overindulgent throttle hand and the resultant highside. With these thoughts in mind I stride directly over to the stock 2008 ZX-10R that we brought along for comparison (though not a pointed comparison, as the ’08 bike is heavily revised compared to its predecessor), leaving Szoke’s bike with its fresh tires for Costa to ride on the cool early morning Mosport pavement.

Mosport is undoubtedly the most storied racetrack in Canada, having hosted a GP race in the 1960s, but the pounding it takes from cars has degraded the surface, which was entirely repaved in 2001. Along the racing line, wide concrete patches stretching for the duration of the turn—in every turn—have been added where the original asphalt has failed. Riders report that in warmer temperatures, the concrete is barely noticeable beneath hot racing rubber, but on this cool day, where single digit temperatures prevail they clearly lack traction. So you either run unnaturally wide lines to miss the patches, or tiptoe between them and the inside of the track, risking calamity if you miscue and clip the curb. Even the fastest and most confident riders here today are avoiding them.  It only takes a few laps to reacquaint myself with the ZX-10R that I rode at the press launch last winter in Qatar. It is both subtle and ferociously fast, and steers precisely and neutrally around the concrete, even well heeled over. As I head out for the second session—this time aboard Szoke’s racer—its power advantage over the stocker is immediately apparent and even feathering the throttle I lunge down the pit access lane with altogether too much vigour.

Horsepower at rounds of the Parts Canada series is enforced by an on-site dynamometer, and if motorcycles exceed 185 they are docked finishing positions. Although the racer only makes approximately 20 peak horsepower more than the stock bike, the modest increase is misleading, as low and midrange power increases are dramatic—it feels like it makes 150 hp just off idle. Where the stock bike builds power to its peak in a progressively linear manner, the racer positively lunges ahead with a seemingly endless amount of thrust. There is no waiting and no lag; it just gnaws its way to the horizon with chilling rapidity.

The back straightaway at Mosport has gently rolling hills, and after a tight second-gear, right-hand corner that precedes the straight, it’s wide-open throttle for as long as your nerve lasts. But where the hills were rolling on the stock bike, on Szoke’s machine the hills were like riding over sheets of plywood jacked up on paint tins, like the ones that the skateboarders in my neighbourhood use as ramps. For the entire duration of the straightaway, where, normally, you catch your breath, the bike keeps pulling harder and harder. Where the front end of the stock bike eventually settles down once you’ve reached fourth gear, there is no such respite on the racer, and the front wheel skims across the surface of the track like the bow of a hydroplane skims the surface of the water.

I had been warned that superbikes could be extremely rough riding, but the firm suspension of the racer stopped short of harshness. The stock bike, which had seemed precise earlier in the day, now seemed vague compared to Szoke’s machine, which tracked with remarkable accuracy and with fabulous feedback, in part because of its race slicks—I could sense through the clip-ons the very moment when the front tire bridged the gap between pavement and concrete, and just a gentle nudge on the bar put me safely back on course.

Accidents by other track day attendees and a shortage of ambulance personnel meant that our riding time was more limited than usual, but by the end of the afternoon I was completely exhausted. The reversed-for-racing shifting pattern of Szoke’s bike—which I had comfortably adapted to in earlier sessions—twice tied me in knots in my final session, and when the flag waved to end my day I was relieved that it was over without incident, because not only are these Kawasakis with pedigree, they are bikes for sale.  For slightly more than the price of a stock new ZX-10R, Kawasaki unloads the previous year’s racers when a new model is introduced, which was the case in 2008 (two days after we rode the championship-winning machine, it was sold to a former Quebecois pro road racer for track day use). But before you pump up your muscles and grow Neil Young sideburns just like Jordan Szoke, be aware that buying this bike will make you the target of every track day nutter that has dreamt of slipping past Szoke on the way to victory. If you’re up to the challenge drop us a line and we’ll pass your name along, but just remember, the bike is without warranty or the promise that you’ll be able to ride it as quickly as the man whose name adorns the fairing.

When I let the clutch out on the ZX-10R race bike, the first thing I noticed was the close-ratio transmission and short gearing. After a few laps, the next thing I noticed was its brutal power delivery, and this kept me preoccupied for the rest of the day. Where the stock bike was barely topping out in fifth at the end of Mosport’s back straight, the racer was screaming at the top of sixth gear, and that was after a poor drive off Moss Corner and backing off the throttle over the mid-straight hump that threatened to loop the superbike every time I rode it over the crest.

Its firm suspension threw me about on Mosport’s ever-deteriorating surface, but kept the machine going exactly where I pointed it. Hopping back onto the stock machine almost felt like getting onto a 600; it was easier to ride and plush in comparison, and plush is never a word I’ve associated with an open-class supersport.

After several years of track testing 1000s, the ZX-10R superbike demanded my full concentration to ride quickly, and even if our day at the track wasn’t shortened by several incidents, I doubt I’d have been able to come to terms with the beast. I can certainly appreciate what Szoke has done on the machine, but every time I rode over that back-straight hump, I kept reminding myself what 16-year-old Brett McCormick accomplished in his first season on a superbike. The kid’s got balls. —Costa Mouzouris