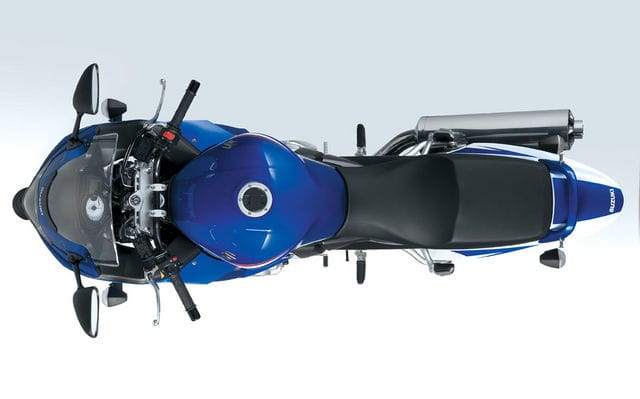 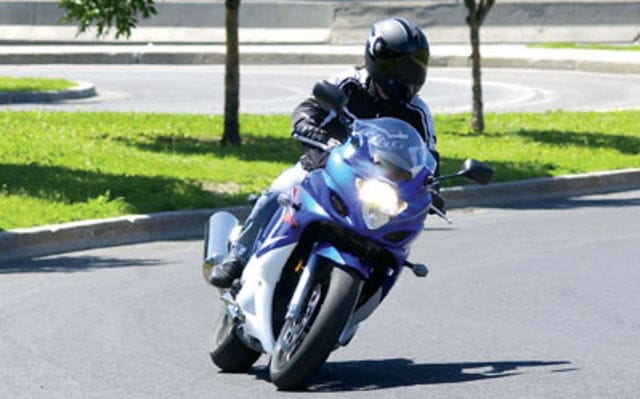 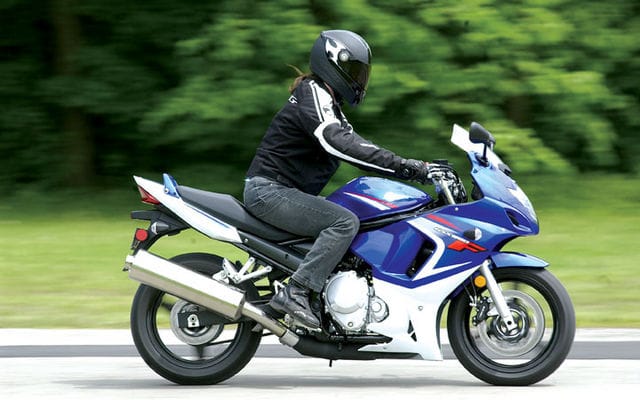 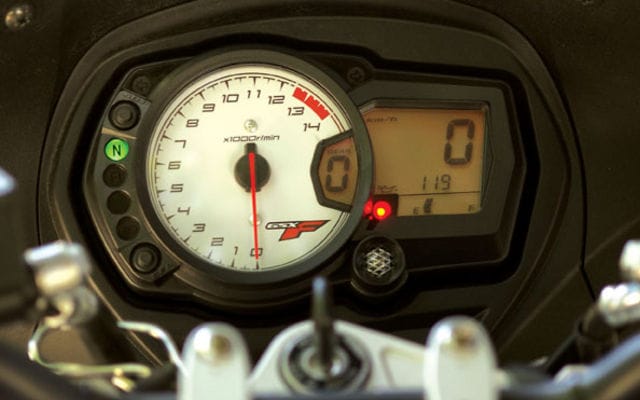 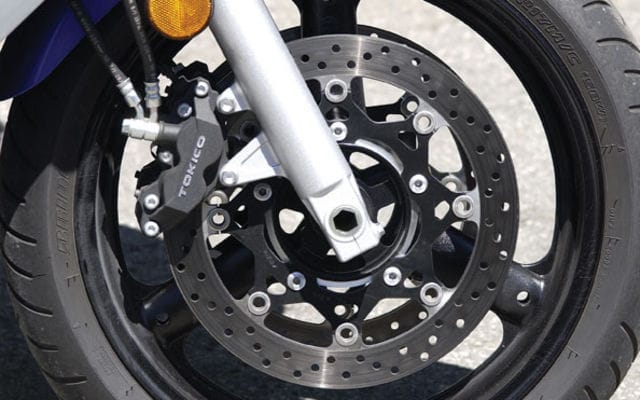 “I think my neighbour races one of those—a GSX-R, right?” the man in the Tim Hortons said as he chinned towards the GSX650F parked outside. While clearly not a GSX-R repli-racer to the trained eye, it was an easy mistake to make. It is, after all, precisely what Suzuki marketing people had in mind when they dressed up the Bandit 650 in a GSX-R-derived full fairing and blue and white livery.

Suzuki GSX-Rs have become identifiable by their trademark blue and white attire, in much the same way Ferraris are synonymous with a bright red paint job. GSX-Rs also bank on their racetrack performance to boost showroom performance, so it’s hardly surprising that Suzuki chose to wrap its middleweight Bandit, an all-purpose standard, in flashy GSX-R-inspired bodywork, keen on tapping into the success of its race-bred cousin.

The GSX650F’s liquid-cooled inline four was introduced in the Bandit 650S last year, when it replaced the aging air-cooled four that was the last remaining vestige of the original GSX-R introduced more than two decades ago. Although it was designed specifically for the Bandit, and is not a detuned GSX-R engine, it is nonetheless a high-performance inline four. A centrally located cam chain drives twin overhead cams, which operate four valves per cylinder set at a narrow angle. Bore and stroke are 65.5 x 48.7 mm, yielding an actual displacement of 656 cc. The compression ratio is set at a modest 11.5:1, though the 650F retains the ability to run on 87-octane fuel, which during our test, was consumed at a rate of 5.6 L/100 km (51 mpg) for a range of 340 km from its 19-litre fuel tank.

A closed-loop EFI system uses 36 mm dual-valve throttle bodies, with the ECU controlling the secondary butterflies based on engine rpm, throttle position and gear selection. The resulting -throttle response is smooth, with the engine tuned for a broad spread of torque. The mill delivers a claimed 85 hp at 10,500 rpm with the torque peaking at 46 lb-ft at 9,000 rpm, so you’ll never need to test the ignition cut-off, which arrives quite softly at 12,500 rpm. Exhaust emissions are kept in check with by a catalytic converter equipped 4-into-1 exhaust.

Idle is maintained automatically once the engine is fired, and you are immediately struck by how quiet the 650F is; the exhaust note is subdued to a mild hum and the engine is almost completely absent of mechanical clatter. Twisting the light-action throttle generates immediate response regardless of engine temperature, and the engine revs quickly.

Abundant bottom-end power and precise fuelling combine with a light-action clutch to launch the bike from a stop effortlessly. The six-speed gearbox shifts with short lever throws and a solid, mechanical feel. The broad power delivery allows lazy riders to lug the engine down to 50 km/h in top gear, with smooth roll-ons from that speed, a remarkable feat for a middleweight inline four. Riders choosing to let the engine spin closer to redline are rewarded with spirited acceleration and a step-less climb through the revs, but power flattens considerably past 10,000 rpm, so there’s no real gain in keeping the engine revving in the five digits. Out on the open road, top-gear passing power is available at a turn of the throttle, downshifting being necessary only when a quick blast is required. The bike is substantially porky, especially when compared to a GSX-R600; at 216 kg (476 lb) dry, it carries 55 additional kilos (121 lb) on the supersport, and that’s without ABS, which, sadly, is not an option as it was on the Bandit 650S.

Despite sportier attire, the 650F retains the Bandit’s sensible seating position: upright with an easy reach to the tubular handlebar and accommodating legroom. Unfortunately, in its sportier incarnation, the 650F no longer has an adjustable riding position; gone is the adjustable handlebar and seat height. Seat height is 770 mm (30.3 in), which is equivalent to the Bandit’s lower setting, but taller riders would have benefitted from the adjustable seat. The seat is flat and firm and provides good long-distance support. Wind protection is better than on a supersport, the fairing keeping the torso and chest free of windblast to neck level, and the wind that meets you at helmet level is free of turbulence. The rider is also well isolated from engine heat, even when ambient temperatures flirt with 30 degrees Celsius. Passengers don’t have to suffer a supersport crouch either, with a wide, flat pillion, low-mounted footpegs and easy-to-reach grab handle.

Smoothness is another attribute of the 650F and it is remarkably vibration free at cruising speeds, particularly in the 80 to 110 km/h range. Rubber-mounted and weighted rider and passenger footpegs are buzz-free and what little vibration gets to the rider, mostly through the handlebar, is not intrusive. In top gear at an indicated 100 km/h, the engine spins at 5,200 rpm, which seems a bit busy given the engine’s midrange-biased powerband. Riders aspiring to use the 650F for long-distance sport touring could confidently fit a rear sprocket with two fewer teeth.

Beneath the bodywork, if you haven’t yet figured it out, is a Bandit 650S chassis. A double cradle steel frame, beefed up for last year’s Bandit makeover, uses larger-diameter downtubes, which increased torsional rigidity by 10 percent over its predecessor. Rake, trail and wheelbase are relatively conservative at 26 degrees, 108 mm, and 1,470 mm (57.9 in.) respectively. Transmission shafts are staggered vertically to reduce engine length allowing a longer swingarm and reducing the drive chain’s torque effect on the suspension.

Budget suspension components provide a ride that is firm but compliant, spring and damping rates chosen to work well in a wide range of riding conditions. The rear shock is adjustable for preload and rebound damping, while the 41 mm conventional fork is adjustable for preload only. Both ends could use slightly less high-speed compression damping for a plusher overall ride and a touch more rebound for improved control at an aggressive pace, but most bumps are handled well nonetheless. Steering effort is light at low speeds and relatively quick, yet the GSX650F exhibits exceptional stability at speed and through long sweeping turns. The narrow (by supersport standards) 160/60ZR17 rear tire facilitates side-to-side transitions, the bike reacting predictably to steering input and remaining neutral while leaning. The Bridgestone BT-020 tires provide a good combination of grip and wear and fit in well with the bike’s intended use.

Although beyond the parameters of the bike’s intended use, we took the 650F along during a track day at Circuit Deux–Montagnes, north of Montreal, and we were pleasantly surprised by the bike’s composure on a racecourse. While not supersport nimble, it nonetheless handles well enough that it can be used by the occasional track-day attendee with moderate riding skills. The 650F remains composed until about a 7/10 pace, but pushing beyond that overwhelms the stock suspension, the bike wavering in protest due to insufficient rebound damping, which we had cranked to maximum at the rear. Clicking the rear preload one step on the cam-type adjuster quickened turn-in without compromising stability, which remained confidence inspiring—if the pace didn’t get too hot—and cornering clearance is adequate, the footpegs only touching in tighter turns and at higher speeds.

The twin 310 mm front brake discs and Tokico four-piston front brake calipers did a great job of slowing the 650F down, and handled the racetrack sessions quite competently, though front brake lever travel increased slightly after several laps. Their action is linear, effort required is moderate and feedback is good, the brakes never catching the rider off guard or behaving unpredictably. The single-piston caliper and 240 mm rear disc resist easy lock-up while offering decent feel. While identical to the braking system fitted to the long-term Bandit 1250S we tested last year, the binders on the GSX650F seemed to work better this time around.

The instruments, consisting of an analogue tachometer and digital speedometer, are well positioned and easy to read. A large digital gear indicator, located in the tachometer face, is convenient for beginning riders, as is the fuel gauge, though less useful to them is the programmable shift light. The mirrors remain generally clear and offer a wide range of adjustment and an excellent view, something that is appreciated when riding in traffic.

Suzuki elected to fit the GSX650F with stacked headlights similar to those found on the GSX-R models, and this new arrangement provides a broad swath of light on the low beam, which remains on when the high beam is turned on. Ram-air ducts made the migration from GSX-R to GSX-F, though on the latter, they serve no purpose; the effort spent creating the phoney ducts could have been better spent on inner-fairing panels with storage compartments. The new fairing, while enhancing the bike’s flash factor, presents at least one drawback: increased damage repair costs in the event of a minor a fall.

Best described as a sheep in wolf’s clothing, the GSX650F offers the look of a supersport with the everyday usefulness of a standard, and with a taller accessory windscreen, throw-over saddlebags and tank bag, it has the makings of a very capable middleweight sport-tourer. That’s a good combination, but it doesn’t explain why the Bandit’s more appealing features, namely the adjustable ergonomics and optional ABS didn’t transfer. At $8,599 the GSX650F is a good buy, but the Bandit was just a bit better.

Why did Suzuki mess with the Bandit 650S? It was a great bike. When I’d last ridden the Bandit, I was more comfortable with its seat raised, and at $400 more, ABS was an inexpensive yet highly effective option. Both those features are gone, on a bike that, when stripped of its outer shell, is a Bandit. I think the GSX650F looks fine, and it certainly works fine, but the Bandit didn’t look bad, and for me, it worked better.

If introducing a sleeker, more aggressive form means forfeiting some function, then call me conservative; I’d rather have the Bandit.  —Costa Mouzouris

The GSX-650F hits me in my motor-cycling sweet spot. Its engine is uncannily smooth and quiet with a broad powerband, its suspension provides a wonderful compromise between comfort and control, its handling is sharp, and its price won’t have you re-mortgaging the house. It lost some convenient features on the way to acquiring its GSX-R-ish styling, a trade-off that clashes with my function before form predisposition. But maybe sales will take off and dealer showrooms will once again fill with sporty bikes that can be ridden around without pounding your tailbone or making your wrists ache for “Advilian” relief. I can dream, can’t I?  —Michel Garneau