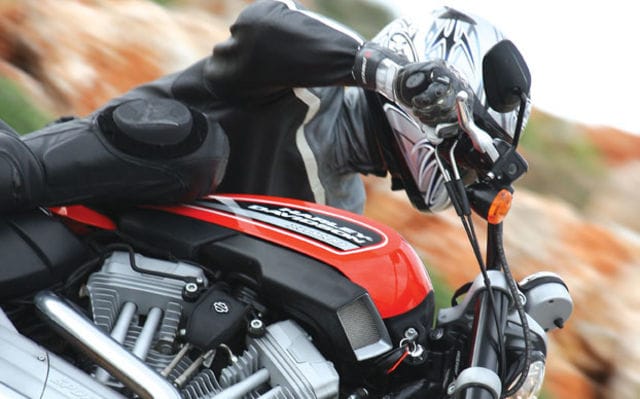 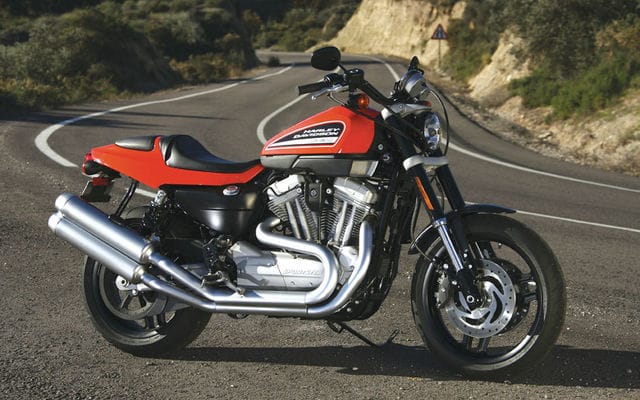 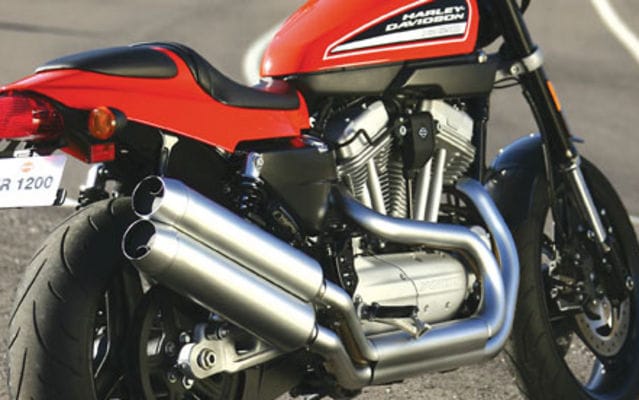 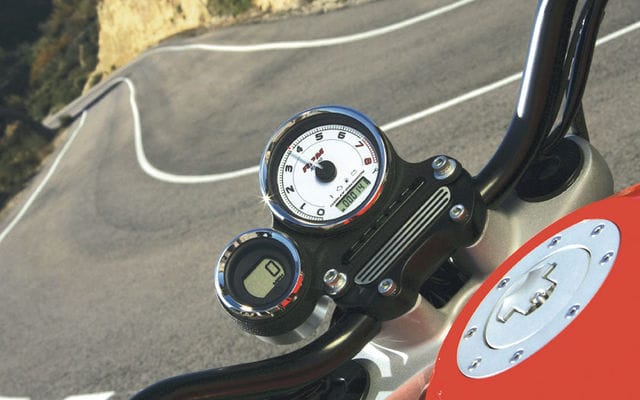 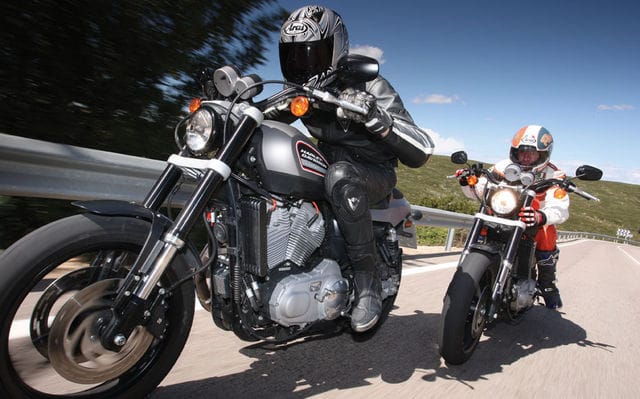 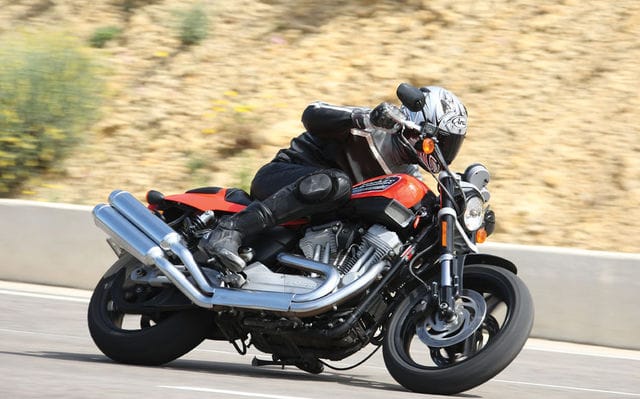 Accelerating hard with my chin on the tank of the orange XR, I’m doing all I can to keep the big V-twin up with the hard-ridden Harley ahead. The name above the big No.1 on the leathers says “Parker,” and when you’re following the dirt-track racer with the most Grand National wins, there’s no time for hanging around. Nine times Grand National champion Scott Parker leads our freight train of thundering Harleys, but I have to admit that my task of staying behind is easier than it might have been. Rather than battling for the lead at the Springfield Mile, I’m following him past a truck on a road near Valencia, Spain. And the Harleys we’re riding are not the legendary XR750 dirt-trackers but their street legal replica, the XR1200.

This new roadster has a long way to go to match the impact of the XR750, which has won 28 national championships and countless races over almost four decades, a period of dominance unmatched in motorcycle racing history. But the XR1200 is very significant for Harley; the firm had its fingers burnt by the failure of the XR1000 in the early 1980s and the XLCR café racer before that. And a quarter century later, with sales of the V-Rod family disappointing, Harley bosses are unconvinced that US customers are ready for another sporty roadster.

Essentially, the XR1200 is a reworked Sportster 1200, and a comprehensively reworked one at that. Its air-cooled pushrod engine shares the standard model’s 1,202 cc capacity and bore and stroke dimensions, but is tuned with hot camshafts, bumped compression (to 10:1 from 9.7:1) and a lighter Buell flywheel to help it rev quicker and higher. Peak revs increase by 1,000 rpm to 7,000 rpm. Much of the power increase comes from a new downdraft intake system whose 50 mm throttle body is 5 mm larger. The frame’s single backbone prevented a Buell-style vertical intake but the system is still much more efficient than the standard Sportster. Peak claimed output is 90 hp at 7,000 rpm, a gain of 20 hp over the Sportster but still 10 hp below the Buell.

The pushrod V-twin is “right on the edge of its development limit,” according to Brad McIlwee, manager of Sportster and Buell engine development. Precision oil cooling, via jets aimed around the exhaust ports, helps the engine to withstand the extra stress. So do tougher connecting rods, a bigger crankpin and a Buell-style idler system to regulate drive belt tension.

There are also plenty of changes to the chassis, though it’s based on a standard Sportster’s twin-downtube main frame including its rubber-mounting system. A redesigned rear section raises the rear of the bike, steepening steering geometry. Suspension at both ends is new, the front featuring a 43 mm inverted Showa fork and at the rear paired Showa shocks mate with an aluminum swingarm 40 per cent stiffer and 1.5 kg lighter than steel.

The cast wheels are purpose designed for the XR, as are Dunlop Qualifier tires. Brakes are new, too, with four-piston Nissin calipers and 292 mm diameter rotors. Other changes include higher rearset footrests, and allied with the wide, slightly raised handlebar, it’s a riding position sporty only by Harley standards.

Styling neatly reflects the legendary racer and the fuel tank was carefully shaped by the design team at Harley’s Product Development Centre to emulate the lines of the original. Capacity is only 13.3 litres but it looks just right, along with the cut-down tailpiece and twin alloy mufflers that run up the right side of the bike. A new instrument console that combines a white-faced analogue tachometer with a digital speedometer dominates the rider’s view.

I am glad to find myself in the group with Scott Parker, even if he gets off to a shaky start by taking us the wrong way through the outskirts of Valencia. Perhaps it is all part of a plan to emphasize that the XR makes a good city bike, despite its looks. Although long and heavy, its weight is carried low, and there is plenty of steering lock to help you flick through traffic.

Sitting at traffic lights with the grey-finished V-twin engine jigging up and down in its rubber mounts is not a bad place to be, though the heat from the motor will be intense on a hot day. Fuelling is very rider-friendly, the XR pulling cleanly from idle via its light-action throttle. The extra top-end power has not been provided at the expense of midrange grunt. Heading out of the city on a wide and busy main road, the Harley jumps forward with surprisingly throaty induction roar, aided by the electronically controlled, noise-test-cheating flap in its airbox.

The engine is happy to rev to its elevated 7,000 rpm maximum, and its rubber mounting allows you to do so without penalty, which allows effortless 120 km/h cruising. On one short stretch of straight road, while adopting a chin-on-tank, left-hand-on-fork-leg dirt-track riding position, 190 km/h flashes up quickly on the diminutive digital speedometer, but shortened gearing for the five-speed transmission means that top speed is not much more than 200 km/h. That’s far from fast but fine for a naked bike. If you’re looking for serious speed you’re aboard the wrong race-replica. Even the XR750 is far from a straight-line demon; the factory bike ridden by Harley’s current double AMA champion Kenny -Coolbeth makes little more than 100 hp. The big difference in performance comes from its low weight, the XR750 is just 145 kg (320 lb) compared to the XR1200’s 250 kg (551 lb).

Suspension rates are roughly 10 percent stiffer than the Sportster front and rear, which allows a reasonably firm ride without discomfort, despite having just 89 mm of rear wheel travel. Parker and French road-race star Adrien Morillas helped with suspension rates during the model’s development, and they did a good job. Although the Showa units are basic, with shock preload the only adjustment, the XR can be ridden hard with few of the normal Harley shakes and shimmies.

Even with its steeper steering geometry the XR has a less-than-racy 29.3 degrees of rake (from 30.1), which combined with its 18-inch front wheel means that it is never going to steer remotely like a road-race bike. But the wide bar allows plenty of leverage and the bike turns without excessive effort and holds its line through the generally smooth-surfaced Spanish curves.

Cornering clearance is good, too, with the pegs touching down reasonably easily but with solid parts tucked well enough out of the way, which allows the specially developed and respectably grippy Dunlop Qualifier rubber to earn their keep. The Nissin front brake is excellent, too, with good lever feel and just enough power to pull the bike up sharply in conjunction with the not-too-grabby rear disc.

The XR steers, corners and stops well enough to be fun on a twisty road, without detracting from the Sportster-like character that will appeal to current Harley owners. Essentially it is a super-Sportster: quicker, sharper, better braked, but with the laid-back countenance that has made Harley V-twins so popular. The XR1200 is a bike that many existing Sportster riders will enjoy if they try it — a machine that blends American tradition with sportier style and performance.