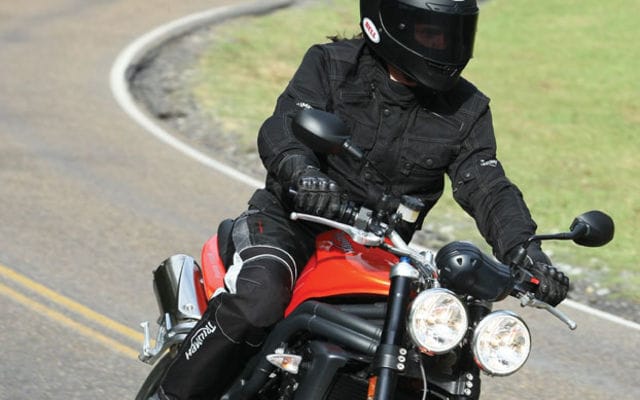 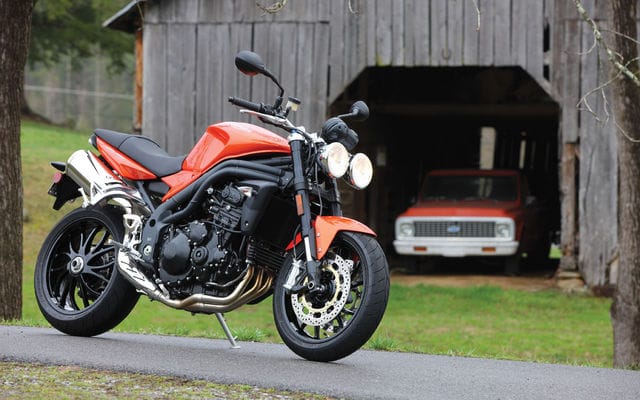 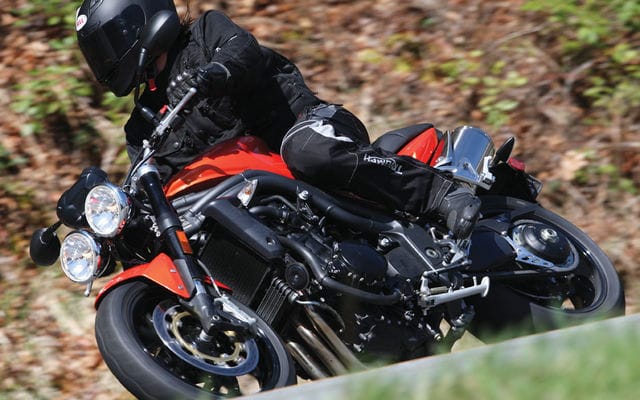 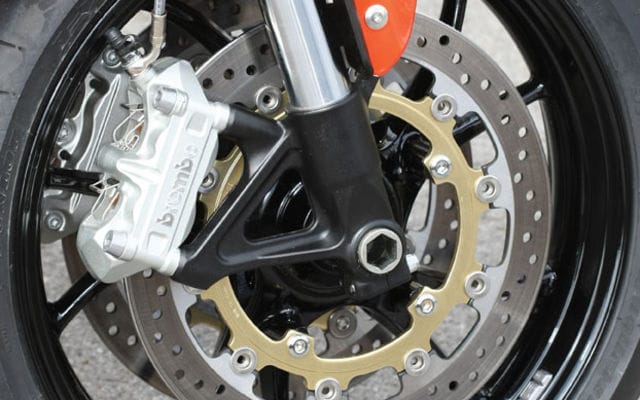 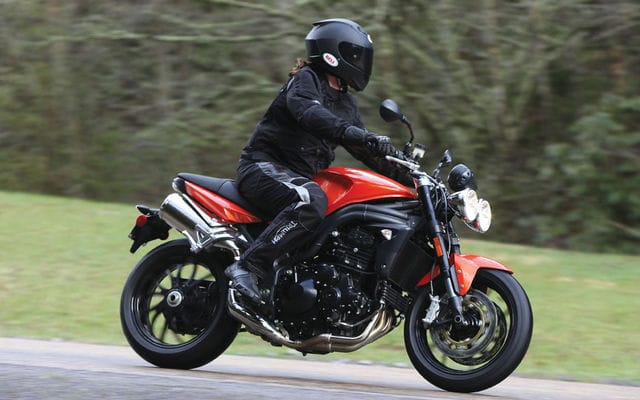 Makeovers are all the rage. In our appearance obsessed society it is impossible to turn on a television without seeing a wardrobe refurbished, kitchen redecorated or hairstyle altered. Is it any surprise then that motorcycle manufacturers are jumping on the bandwagon and offering up re-styled, warmed over versions of existing motorcycles?

Behold the face-lifted 2008 Speed Triple, the global bestseller that, more than any other model, powered Triumph’s rebirth in the 1990s. It wasn’t so long ago (2005 to be precise) that this model received a thorough going-over, with an enlarged 1,050 cc engine, inverted fork and host of other changes. There was nothing wrong with the previous version but the competition hasn’t been sitting on its laurels, with Aprilia’s Tuono, Yamaha’s 150 hp FZ1 and Ducati’s next generation 696 Monster only a few of the new players on the naked scene, Triumph went back and had a look at the Speed Triple.

Before we discuss what’s new, let’s cover what’s unchanged. The engine remains the same and, interestingly, Triumph engineers resisted the temptation to add dual-butterfly technology to its Keihin fuel injection system, claiming that the current system works well. The frame is also unchanged, as is the riding position.

So what’s new for 2008? For starters, Brembo mono-block front calipers replace last year’s Nissins. The four-piston radially mounted units have four 34 mm pistons each mated to an individual brake pad. At the other end of the braided-steel brake line, a new Nissin radial master cylinder with 19 mm diameter piston (identical to the Daytona 675) finds a home atop a new Magura aluminum tapered handlebar. In addition to claiming more outright braking force, the new components are designed to enhance feel. While the rotors stay at 320 mm diameter, they have reduced unswept area with a different hole pattern for improved heat dissipation. Still with the front end, Dunlop Qualifier tires claim five percent less inertia for quicker response and turn-in.

The new seat is flatter to give rider and passenger more room and allow more mobility. Passengers will also appreciate the new footrest hangers that give 50 mm more legroom.

Remaining changes are primarily aesthetic and can be traced to a project that began in March 2006 at the hands of an Italian firm. The 43 mm inverted fork is now anodized black (with a lower caliper mount casting altered to accommodate the upgraded calipers); the radiator cowling is new, and last year’s five-spoke cast wheels have been replaced with a 14-spoke design unique to the Speed Triple. Also new are the subframe, battery box, bodywork panels, rider heel guards, re-styled silencers and clear lens LED rear light.

The Speed Triple has carved a niche because of its scrappy styling mixed with surprising real-world functionality. Which begs the question, how does the new Speed Triple work? It works a lot like the previous version, just a bit better. The affable engine has kept every bit of its smooth and refined character. Power delivery is very strong from just off idle and is extremely linear with no discernable steps or dips in the powerband. Throttle response is quick and predictable regardless of engine speed, with no surging or temperamental behaviour. Even when lugged down to ridiculously low speed, applying throttle generates smooth response without the slightest hint of shuddering.

On the curvy roads of Tennessee and North Carolina flexible power allows me to select one gear and let the engine do the work without need for incessant shifting. Revving the Triple in the upper half of its range will get you where you need to go quickly as the claimed 131 horsepower leads a forceful forward charge. While the engine’s refinement stands in contrast to the bike’s bad boy image, it is still an engine that has not been sanitized to dullness. Vibration is well controlled but a pleasant mechanical feel remains. Twin exhausts generate a throaty growl and rolling on the throttle gives a noticeable intake roar.

The cable-operated clutch has a light pull and progressive action. The six-speed transmission shifts lightly but the final two ratios are unusually close together, and sixth gear has the engine revving just shy of 4,000 rpm at 100 km/h, for a comfortable, relaxed highway demeanour.

The riding position places the rider in a slight forward crouch that perfectly counteracts wind pressure at typical cruising speeds. The wide handlebar gives excellent leverage and surprisingly light steering. The bike responds instantly to input and it is this agility, perhaps more than any other characteristic, which defines the Speed Triple for me; it is a willing dance partner that anticipates your next move. A stout inverted fork has compression damping in the right leg and rebound damping in the left. Action is firm yet compliant, and stock settings keep the chassis taut and confidence inspiring during our rapid pace.

Revised brakes deliver sport-bike-like stopping power with a moderate and predictable initial bite, another welcome feature given the sinewy surroundings. The front requires a firm hand but rewards with excellent modulation. Also impressive is the seat, which allows me to move about with ease, a necessity given my diminutive five-foot-eight stature. While our ride is not Iron Butt in length, the seat remains cushy and accommodating.

Instrumentation, which consists of an analogue tachometer and digital speedometer, is well positioned and easy to read. The pass light switch, positioned on the back of the left handlebar switchgear, is a convenient and useful feature. Handlebar-mounted mirrors provide a good, if fuzzy, rear view at engine speeds below 2,500 rpm and a final beef is an awkward sidestand location that takes some getting used to.

In the end, the Speed Triple is a nearly ideal mix of urban brawler and functional motorcycle, and at $12,999, it’s $1,000 less than last year’s model. Triumph will be hard-pressed to improve it the next time around.