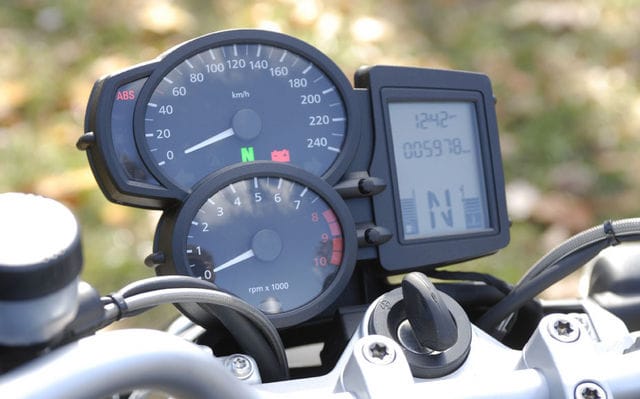 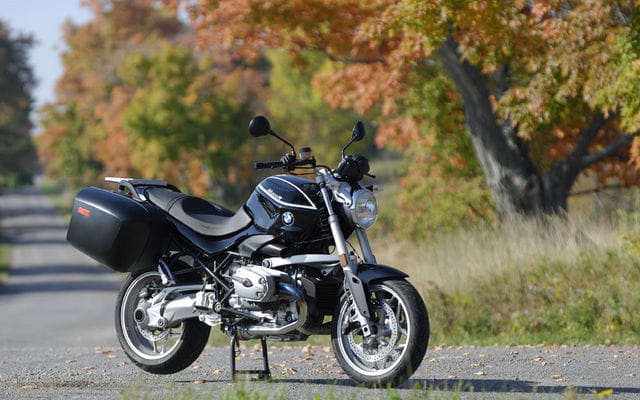 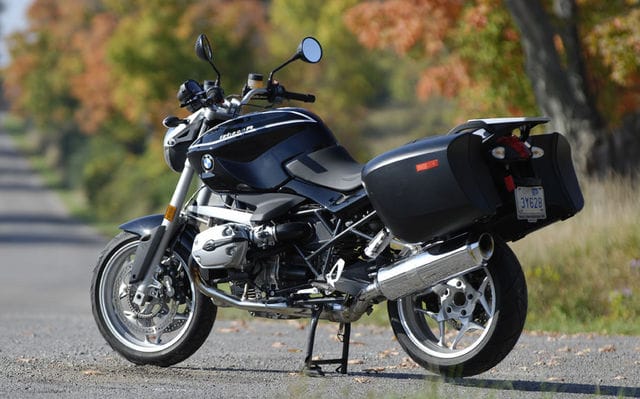 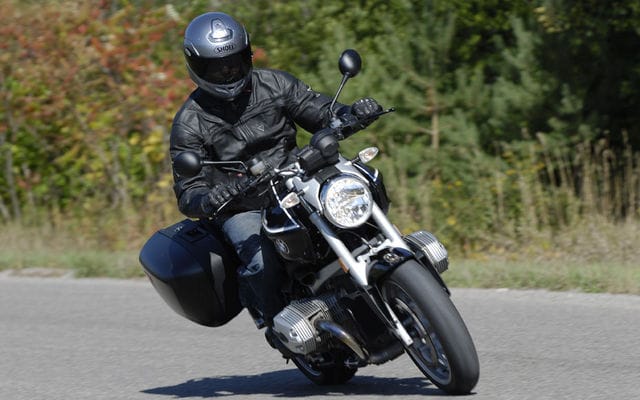 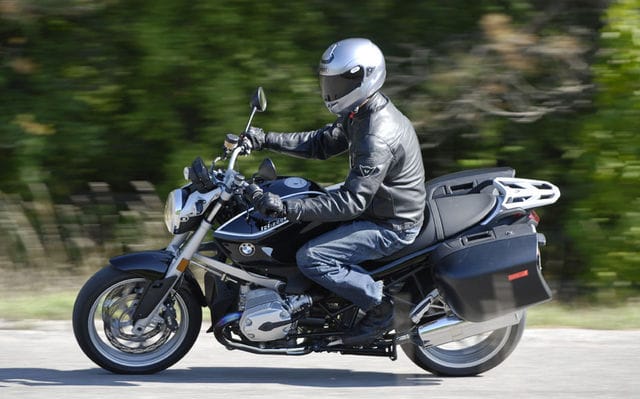 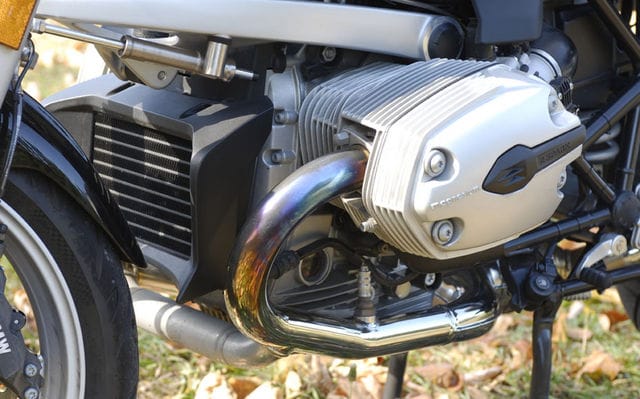 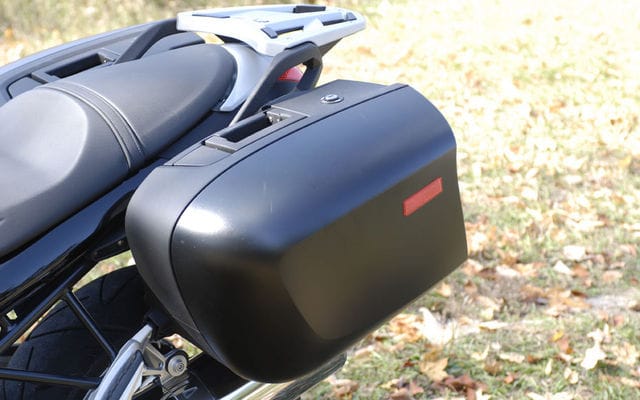 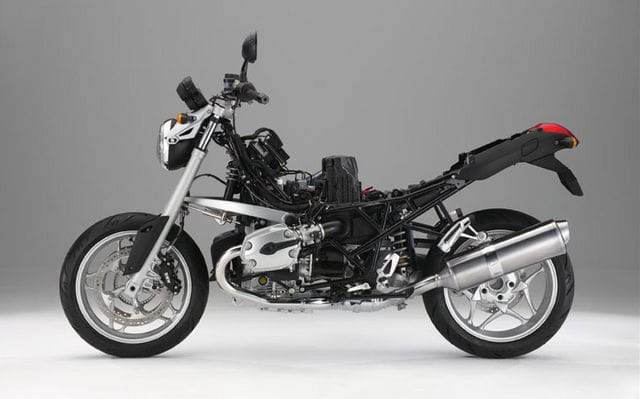 It is a late fall afternoon on an uncharacteristically warm day. While photographer Hugh McLean blocks out a cornering shot, we sit with our backs against a maple tree and look across a wooded valley. Turning to check Hugh’s progress, we catch a glimpse of our test machine, and its handsomeness perfectly suits the calm of the day. Its black finish offset with white lining gives it a vintage charm, despite the fact that it is a thoroughly modern design. Can a company that shows such restraint be the same one that brought us the garish R1150R Rockster and the ill-advised (and discontinued) R1200C cruiser? But beyond that, in a market where the standard has been replaced with the harder-edged, higher performing naked, is there still a place for a gentle fairing-free motorcycle?

We have spent time at press launches with BMW chief designer David Robb, and even though Robb has the tweedy look of a tenured professor, his designs are anything but conservative. This is the man, after all, who was vilified for the duckbill nose on the GS series. (Robb is far too classy to point out that it is a motif that has been heavily copied, by, among others, Ducati and KTM.) The conservative style of the R1200R seems to be his concession to BMW’s lineage, which makes it the antidote for customers who feel that the rest of the range has become just too peculiar.

The R1200R has significant gains overâ¯â¯its predecessor, the R1150R. The 1,170â¯cc four-valve twin is the same as fitted to the R1200RT tourer, and output of 109 claimed horsepower is identical to the RT, despite a different exhaust system. Overall gearing is shorter than the RT (2.75:1 versus 2.68:1), further enhancing acceleration. Compared to the R1150R a new subframe contributes to a claimed loss of 20 kg (44 lb), bringing dry weight to a claimed 198 kg (417 lb). The net gain of the weight loss and the extra power (85 hp for the R1150R) of the enlarged engine is a striking 40 per cent improvement in power to weight ratio.

While the R1200RT is nimble for a big tourer, stripped of its bodywork, reconfigured, and rechristened the R1200R it still makes for a generously sized standard, and it is somewhat of an anomaly compared to its competition. Somewhere along the line, customers, for better or worse, decided that just because a motorcycle is without a fairing it should still have performance nearing that of a superbike. So along came a legion of tubular-handlebar flyers, led by Yamaha’s FZ-1, Aprilia’s Tuono and four-valve Ducati Monsters. Power from the Boxer twin is smooth and linear, with strong performance that belies its relaxed gait. Claimed peak torque of 85 lb-ft arrives at a languid 6,000 rpm, with 75 lb-ft available from 3,500 rpm on. Shifting of the six-speed gearbox is light and sure, with only an occasional reluctance to up shift under full power, perhaps attributable to the stiffness inherent in a low mileage tester—it will likely become more pliant as kilometres accumulate.

Optional on the R1200R is automatic stability control (ASC). In operation it resembles the system on Kawasaki’s latest ZX10R, which matches engine in-gear acceleration against a pre-programmed map. If the engine speeds up too quickly, which would indicate a loss of rear wheel traction, ignition timing is retarded, power is reduced and traction re-established. Unlike ABS, which is immediately noticeable when activated, stability control is much more subtle in operation and effect, and probably won’t do as much to get you out of trouble.

Like all BMW Boxers, it is not a motorcycle for frantic late braking and quick transitions (smoothness is key), and though the non-adjustable Telelever front suspension has a degree of vagueness, road holding is excellent. Rear suspension is adjustable for preload and rebound damping, and we increase the latter, which settles the rear end after an initially springy ride. BMW’s Electronic Suspension Adjustment (ESA) is optional on the R1200R, allowing preload and damping adjustments with the push of a button. Our bike isn’t so equipped, but we’ve ridden other BMW models with this feature and have nothing but praise for its ease of operation and remarkable compliance.

An improvement over some BMW models, at least in feel, is the absence of servo-assisted braking. The servo was added to shorten braking time by adding what is essentially a power booster in the system. It may be a good idea in theory, but in practice it lessened feel, making delicate modulation difficult and making BMW’s excellent ABS almost a necessity, lest you squeeze too vigorously in marginal traction situations. Paired front 320 mm rotors with four-piston calipers have excellent feel, and the rear 265 mm rotor is not prone to early lockup. On the 2008 R1200R, ABS is only available as part of BMW’s $1,900 “Safety Package” that also includes ASC and an electronic tire pressure indicator. Our test bike has ABS and we recommend it.

The motorcycle tested recently that reminds us most of the R1200R is Moto Guzzi’s Breva, another bike slightly out of step with current trends. Our quandary is that while they are two machines that work well naked, they both have the comfort, performance, and long-legged gallop that makes you want to outfit them with saddlebags and a windshield—because, truthfully, they are more touring bikes skinned of bodywork than knock about nakeds. BMW’s accessory division can outfit the bike as lavishly as your wallet allows. Our machine is equipped with easily removable saddlebags ($1,190 with mounting hardware), each with generous 32-litre capacity allowing storage of a full-face helmet, but they are wide and prone to bumping into things in tight quarters.

The 2007 model on test retailed for $16,000, but for 2008, BMW has reduced pricing across its model line; it now retails for $14,500. But the question remains—doesn’t it make more sense to buy a model already outfitted with touring amenities? A 2008 model equipped like ours (but with added ASC and tire pressure indicator) costs $17,590; $1,400 more gets you the R1200RT, which has one of the most effective fairings on any motorcycle we’ve tested.

The opposite of a boxer that punches above his weight and contends in a higher class is one that sweats a few pounds off and drops a class, and the latter scenario best describes the R1200R. Riding the BMW gives you the sense that it would be more comfortable adding the few pounds that it lost (in the form of a fairing and panniers) to come back to its natural weight. It’s not that it doesn’t work the way it is, it’s just that there are cheaper and lighter ways to run around town, and when we get on the R1200R, we don’t want to just keep our trips local, we want to keep going.