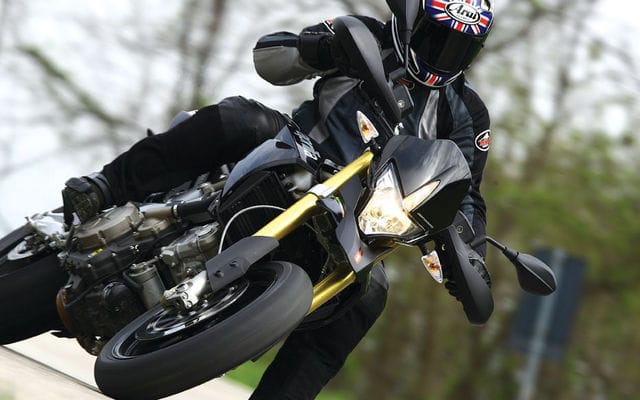 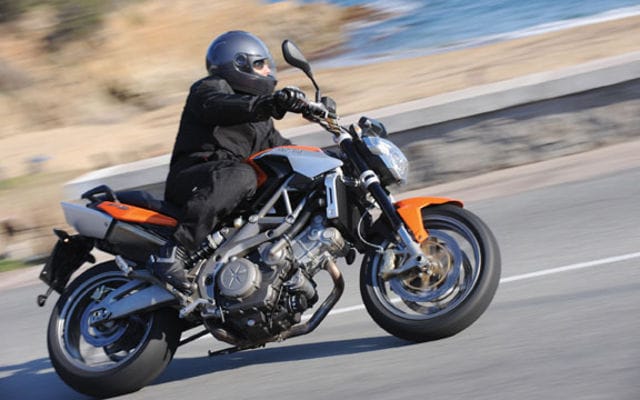 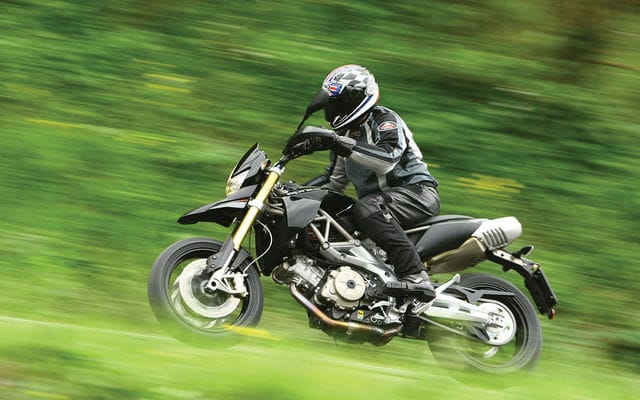 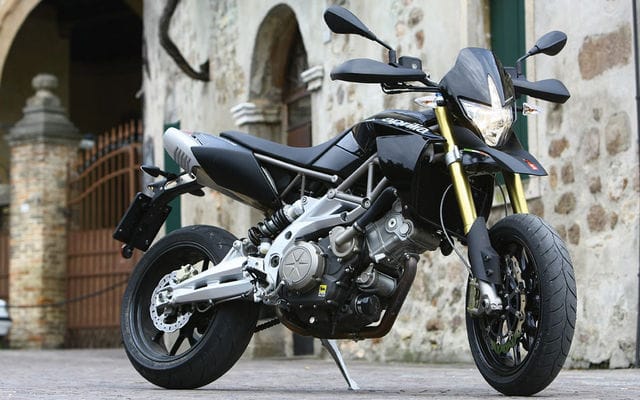 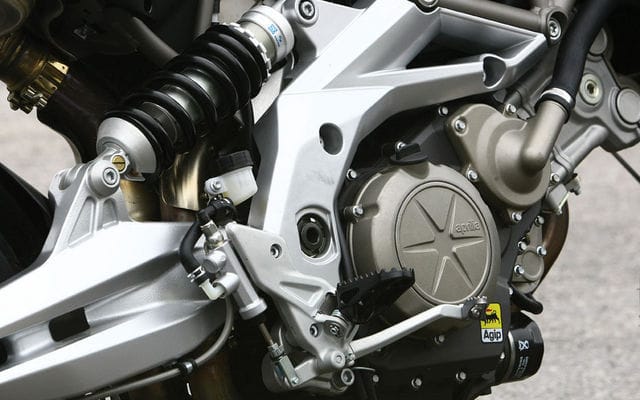 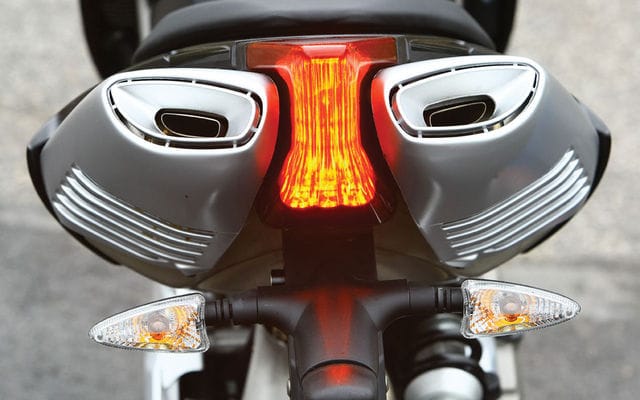 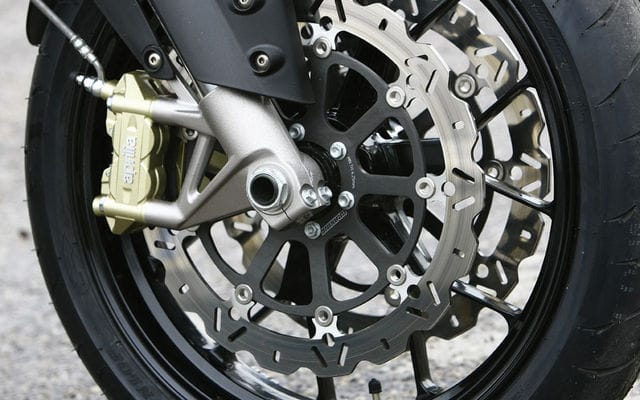 Aprilia’s ground-up overhaul of its range is gathering momentum, with the SL750 Shiver V-twin launched last year in Europe as the hors d’oeuvre to this feast of new bikes. Canada got the Shiver 750 this year, but Europe is again one step ahead with the introduction of the SMV750 Dorsoduro that debuted at the Milan show last November.

Dorsoduro is the name of one of the six sestiere districts near Venice, Italy, but Dorsoduro in Italian also literally means “hard back” (as in, I’m a survivor), an appropriate name for a go-anywhere moto totale. This radically styled supermoto street rod—what Italians term a maxi motard—like the Shiver that preceded it, is powered by the eight-valve DOHC engine that’s first up in an all-new family of Aprilia-built 90-degree V-twins created by the Piaggio technical department, each with a different state of tune but using the same crankcase design. The 92 x 56.4 mm ultra short-stroke engine breathes through a pair of 52 mm throttle bodies contained within the 7.9-litre airbox—that’s big for a 750 cc twin. With a claimed 92 hp available at 8,750 rpm, it has been retuned to give the same power but a considerably broader spread of torque than in Shiver mode.

The Dorsoduro and the Shiver are Aprilia’s first bikes to use fly-by-wire throttle control. Now on its second-generation programme, after problems with early production Shivers dictated a remap, the system delivers faultless control. It differs from the fly-by-wire system used on Yamaha and KTM models in that there is no mechanical connection between the twistgrip and the throttle valves; it instead operates a potentiometer located behind the steering head that’s linked to the Magneti Marelli EFI. This analyses data from various sensors before passing the info on to a second ECU mounted within the airbox, which controls the twin servomotors mounted alongside, each operating a throttle butterfly. Unlike Yamaha and KTM fly-by-wire systems, the twistgrip can’t be used—via cable—to force the throttle closed in case of a failure, however, we’re told the likelihood of both servomotors failing simultaneously is very slim.

There’s a choice of three different engine maps available, each with its own corresponding programme, which are accessed via the starter button once the engine is running. I spent most of my day riding the Dorsoduro through the scenic hills and valleys of the volcanic Colli Euganei south of Padova, with the touring map dialled up, and this delivered zestful performance combined with a satisfying sense of control.

Switching to the sport mode showed an immediate difference, with considerably more aggressive throttle response and a fiercer pickup from a closed throttle. A mid-morning shower provided a chance to select the rain map, but while this certainly softened everything up noticeably, its benefits became most apparent when we started taking photos at a corner with worn, slippery tarmac. After nearly unloading a couple of times I was ready to move on, until I remembered to switch to rain mode, and—bingo—now it hooked up and drove out of the turn without trying to low-side me. This three-way electronic package really works well, and I guess the only surprise is why we’ve had to wait so long for it to be available on everyday bikes.

The engine forms a semi-stressed component of a hybrid chassis, which uses an ALS450 tubular steel upper spaceframe bolted to a pair of cast aluminum side plates that provide the pivot for the strutted, die-cast aluminum swingarm. The Dorsoduro’s 1,505 mm (59.3 in.) wheelbase isn’t overly rangy, with rake of 26 degrees and 108 mm of trail for added stability. At the lower end of the forks are four-piston calipers Aprilia claim as their own, gripping the same twin floating 320 mm Braking wave discs as fitted to the factory Supermoto racers. Claimed dry weight is 186 kg (410 lb). The 43 mm inverted Showa fork and offset Sachs cantilever rear shock are each adjustable for preload and rebound damping.

Thumb the starter button, and the Dorsoduro rumbles to life instantly, settling to a smooth, lilting idle marked by a fruity note exiting from the distinctive looking underseat silencers. These are quite high set, and the only real drawback to the SMV750 is throwing a leg over it in any kind of hurry, for the 870 mm (34.3 in.) seat height is pretty challenging for all but taller riders, making it best to step on the left footrest to climb aboard.

Electronic throttle control not only helps Aprilia reduce emissions sufficiently to achieve Euro 3 compliance without unduly sacrificing engine performance, and especially the Dorsoduro’s meaty midrange torque, it also makes this maxi motard ultra responsive and relatively potent. Compared to the Shiver, the Dorsoduro’s engine has a fatter power delivery, aided by an extra two teeth on the rear wheel sprocket. The light action hydraulic clutch is smooth and predictable in its bite, and the six-speed gearbox has a clean, crisp shift action with well chosen ratios; there’s quite a long first gear, then the next three ratios are close together for serious street fighting and the top two ratios are well spaced for high speed work.

You don’t need to work the engine very hard to get meaningful motion because the Dorsoduro’s happy zone is from 4,000 to 8,000 rpm. It accelerates wide open without transmission snatch from 3,000 rpm to the 9,800 rpm rev limiter. There’s sufficient poke to get the front wheel lifting off the ground under hard acceleration in the bottom two gears, and as it does so you note that the counterbalancer-free motor is extremely smooth down low, with only some residual vibration through the footrests from just under 6,000 rpm on up—sufficient to remind you what you’re riding, but a long way from being obtrusive.

Aprilia has dialled in the handling on the Dorsoduro better than on the Shiver, with multi-rate springs delivering progressive response. Fork compression damping is non-adjustable and quite softly set up, so there’s a fair bit of dive when you squeeze the front brake lever hard. Weight transfer isn’t excessive and rebound damping is adequate, so the Dorsoduro doesn’t tip into turns when you let the brakes off, like the Shiver did. And, as before, you’d never guess that Sachs shock was devoid of any link, for its progressivity and compliance are excellent, allowing you to use the 180/55-17 rear Dunlop Qualifier to best advantage. Wheels are 17-inch, but the rear tire sits on a wide six-inch rim, which is surely more show than go—only the extra leverage from the wide handlebar stops the bike from standing up from a lean because of that fat footprint.

The Dorsoduro is agile and lots of fun to ride through a series of hillside hairpins or a succession of tight, twisty turns, where its balance is apparent, with good feedback from the front tire. The only handling drawback I found in my day of canyon carving was while rounding a smooth, flat 120 km/h sweeper. The handlebar consistently moved about in my hands exiting the apex of the turn. It didn’t degenerate into a tank-slapper, but the otherwise excellent stability gained a black mark.

The 750 Dorsoduro is as a significant marker for where Aprilia goes from here. This is a truly polyvalent moto totale, even if the 12-litre fuel tank restricts range to 200 km. You don’t need to be clairvoyant to see that this is the base model of the maxi motard concept, and quite apart from the 1,200 cc equivalent due as a 2009 model, we can expect Aprilia to develop two other 750 cc versions positioned either side of this one; one a full-on street fighter with cast wheels and more aggressive looks, the other a street enduro with 21-inch front wheel, providing a counter to the new BMW F800GS. The Dorsoduro is a piece of Piaggio’s plan to once again make Aprilia a contender.