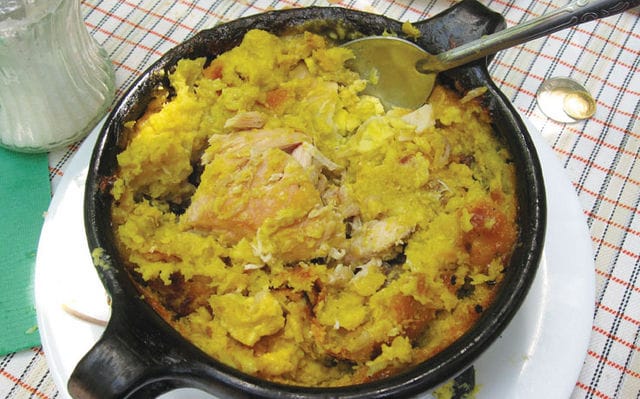 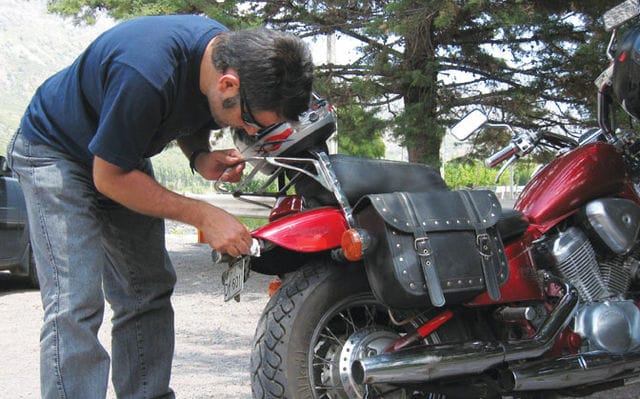 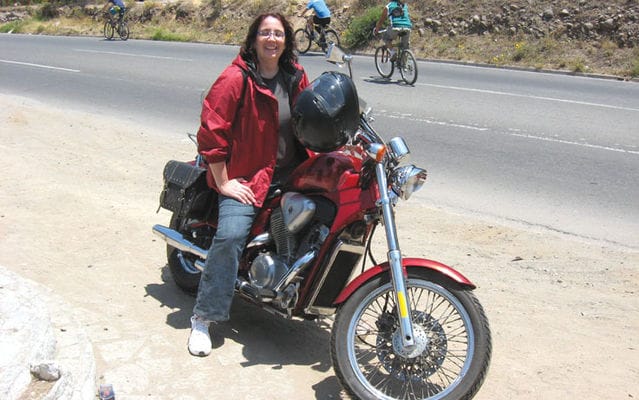 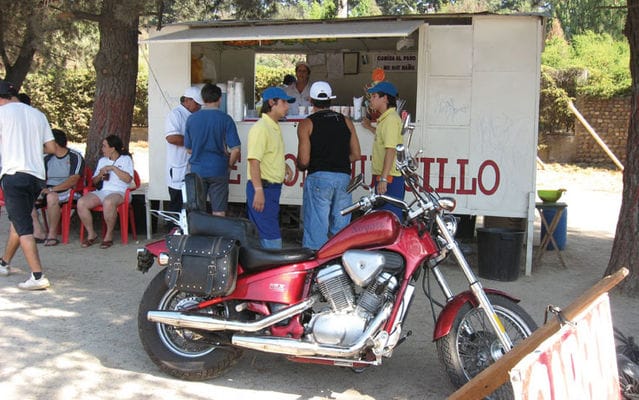 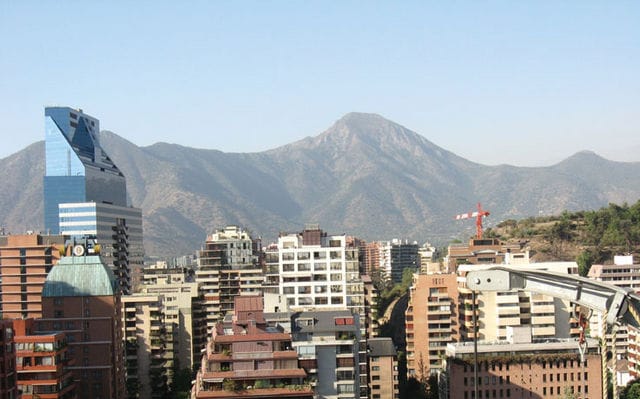 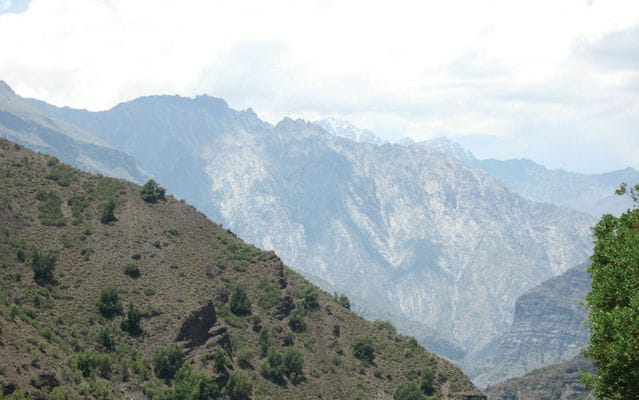 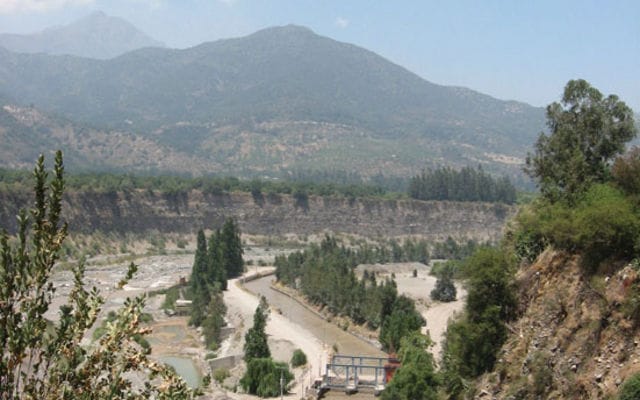 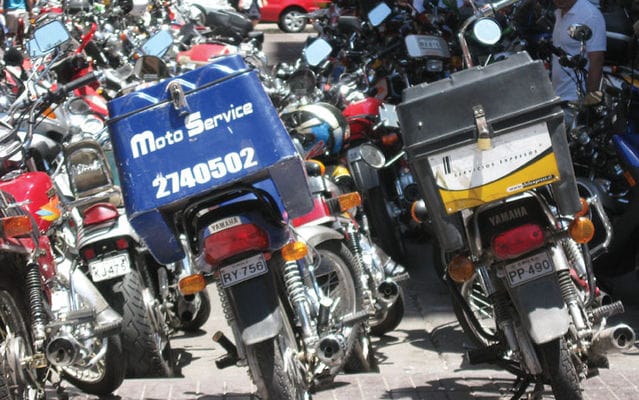 Motorcycling in a foreign country is exciting. Riding on the back of a bike with a motorcyclist you’ve never met is something else indeed. Story and photos by Ava Chisling

Wolfgang, a German friend who tests BMWs for a living, told me that “Ricardo from Santiago” would take me for a motorcycle ride for the chance to practice his English. I emailed Ricardo before arriving in Santiago for a winter-time vacation and he seemed like a nice guy, in writing, at least. However, my family was convinced that “taking me for a ride” was really code for “killing me.” When I asked Wolfgang whether or not his friend was a murderer, he said that Ricardo regularly lets out of town motorcyclists stay at, and then safely leave, his apartment.

Ricardo is 45 minutes late. I sit outside my Santiago hotel convinced that every scooter that passes by is his. I am on a corner of two busy streets and there is no shortage of motorcycle traffic in this city of 6 million, especially since it is summer and 34 degrees. I’m a bit surprised when a very heavy man pulls up on a 250 cc scooter that will never make it up the mountain with both of us aboard, but he continues on. Moments later a shiny red bike, long-used but proud in character, arrives. A man wearing a bandana, sunglasses and a five o’clock shadow (even though it’s barely noon) shuts off the engine and holds a helmet out for me. “Ready?” he says. “Definitely,” I say, and climb aboard his 1992 600 cc Honda Shadow, hoping it is not a dumb decision.

Ricardo is wearing a t-shirt and jeans and I am dressed for the ski slopes. It’s plenty hot in the city, but I’m certain that once we reach the Andes I will need a sweater and windbreaker. I don’t need either, a lesson I will later learn, when I have trouble breathing from heat exhaustion.

Anchored on the back of the Shadow he calls Coyote, we are stuck in long-weekend traffic but happily immersed in conversation. We ride through wealthy suburbs, where the hired help walks the dogs, and poorer neighbourhoods where the dogs walk themselves. Ricardo tells me he has been riding for 11 years. He bought this bike last year because the model suits his style, he says, which I am guessing by his bandana and his tardiness, is laid-back. Given a million dollars, though, Ricardo tells me he would ditch the Coyote and buy a Harley, a BMW R1200GS and a Suzuki Hayabusa.

As we ride across town, the traffic builds. It is New Year’s weekend and everyone is leaving the steam of the city. Due to Chile’s geographic slimness, an easy drive allows a quick escape to the sea or to the mountains from anywhere in the country. We are heading to Cajón del Maipo, a mountain playground about 60 kilometres from Santiago where wealthier Chileans keep second homes.

While we stop and start and weave through traffic, Ricardo asks me why I chose not to ride my own bike. It was a fair question since I have been riding motorcycles for close to 30 years. As I get older, I find the concentration required to negotiate unfamiliar mountain passes exhausting. And then there is the other problem. A European tour leader once gave me the nickname “Cappuccino,” but not because I am speedy. He told me that I rode so slowly, it’s as if I were sitting on a patio enjoying coffee.

As I tell Ricardo this story, two motorcycle policemen pull up behind us. I continue to chat and point and snap photos but almost fall off the bike when the police sirens come on. One police bike stays behind us with his lights and sirens blaring, while the other comes up beside us. The policeman waves and shouts something at Ricardo, who listens and nods. The sirens stop. I asked him what that was all about and he said, without any irony, that we were travelling too slowly and that the police wanted him to speed up. It seems my cappuccino-ness extends forward from the passenger seat.

In the Cajón del Maipo area, you can rock climb, horseback ride, hike, bike and jump into a hot spring, but all I see are mountains. We are on a paved road and this Cappuccino Gal is sitting back and relaxing, taking in the view, camera in hand. I was already in awe as we rode along, but as we turn onto El Alfalfal road, the beauty really begins.

The scenery here is different from anything I have ever seen before. It is a mix of Arizona-arid and the Swiss Alps, with metres-high oddly shaped cacti along the side of the road and snow-capped jagged peaks hiding behind more jagged peaks. Our hour-long ride through the valley is otherworldly—hot, dry, remote, silent and almost all grey and brown. Occasionally a brave cyclist or local villager on a horse passes by. We glide through turn after turn, the Coyote reminding me of how bikes used to sound, the glaring sun reminding me that I am still wearing too many layers. And as we ride I quietly melt inside my windbreaker.

Ricardo pulls over into a sandy lot. He tells me the road ends here because it becomes private land used for electricity. I see a guard of sorts sitting in a hut watching the road. I had seen small villages during our ride and wondered if there was a café nearby where we could take a break, giving me the chance to remove my layers and cool off. Without a café to hide in, I sit on the sand, pour water over my head and finally, gratefully, peel off my clothes, to the delight of the guard who, presumably, does not see too many foreigners strip in the course of a day.

We turn around and Ricardo grumbles about being hungry. Once we leave the valley, Ricardo reads aloud the signs along the road. I don’t know what he is looking for but I know when he finds it. We swerve off the side of the road kicking up sand, make a hasty U-turn, and pull into the lot of a barely visible restaurant.

We walk through the restaurant where only a few people are dining on the back porch and take a seat in an open area at the rear, surrounded by greenery. A young man is sitting on the porch playing classical guitar, singing love songs to himself. The owner exchanges chitchat with Ricardo. There is no need for a menu, says Ricardo. He knows exactly what he wants and proudly orders something for us to share. He tries to explain to me what is in the dish. “It is pastel de choclo, perhaps translated as cake corn in English.” He tells me that you can only eat this meal in the summer because that is when the corn is ready.

When it arrives it looks like yummy onion soup or a delicious cheese soufflé, but it is actually a national treasure, a dish made of corn and chicken and eggs. I find it neither yummy nor delicious. I find a polite way to refuse, smiling, speaking quickly, and sipping my Coke until he eats the whole thing. The guitar player approaches us for a tip, and I give the equivalent of $2. Ricardo says that it is the norm to give 25 cents and that I likely made his week. Making someone happy for that price seems like a bargain.

After an hour or so, we get back on the bike to head home. Along the way, Ricardo asks if I would like to try another national treasure and I say yes but really mean no. We stop at an ordinary roadside stall, except that this one has tables adjacent to the busy road and is absolutely packed. People are sipping from a large cup and digging into it with a spoon. I am hoping this is a Chilean milkshake stand, but it is not the case. Ricardo tells me the name of the drink is mote con huesillos, with “small peaches, boiled wheat and juice,” but unfortunately all I hear is “corn and chicken and eggs.” I smile, pretend to take a sip, and then smile some more.

The ride back is quiet until we hit Santiago traffic again. We have been on the road for six hours and Ricardo, having practiced a whole lot of English, is probably happy to get home. He is weaving between cars using my legs as buffer. I tell him that I’ll smack his helmet every time he goes between cars. For the better part of an hour there is a lot of smacking going on. And a lot of laughing. He points out areas of interest and I sit back and enjoy the ride, and end the day a very satisfied cappuccino.