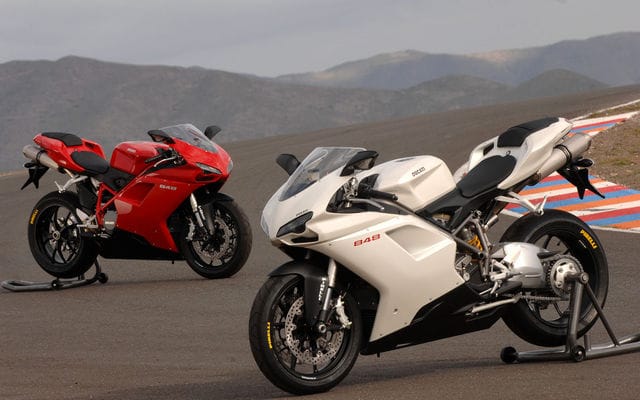 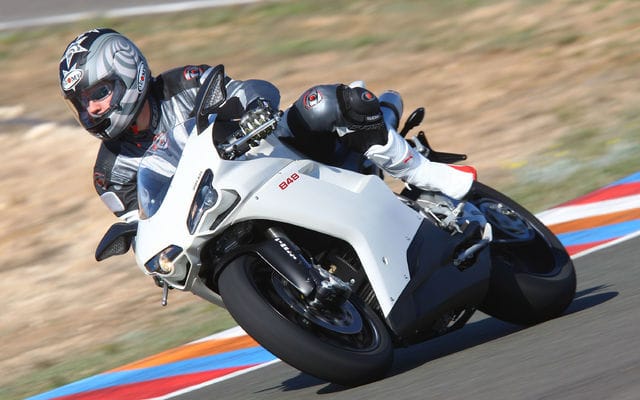 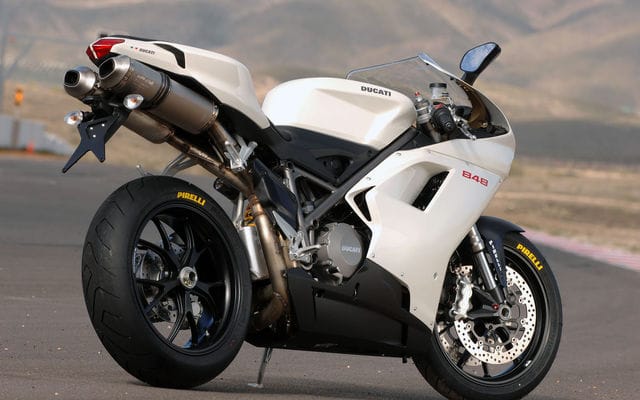 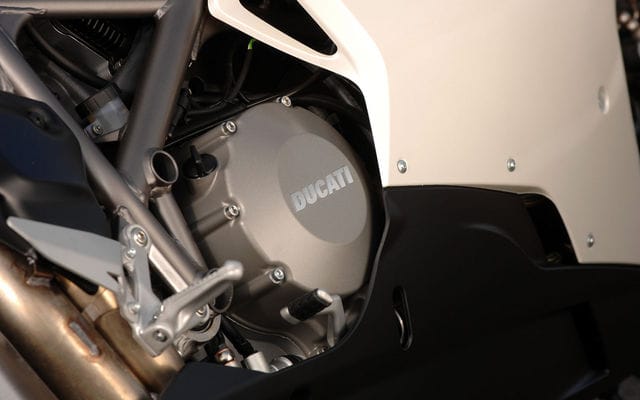 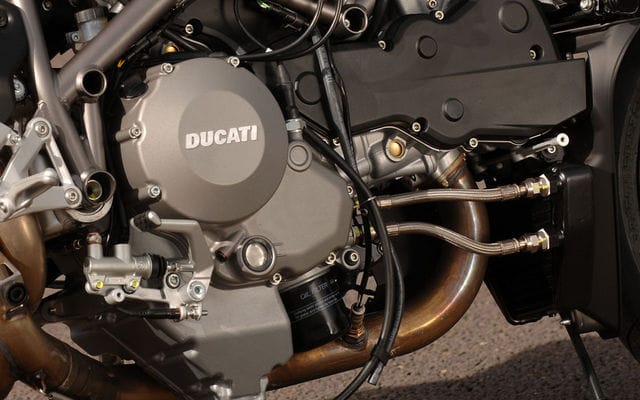 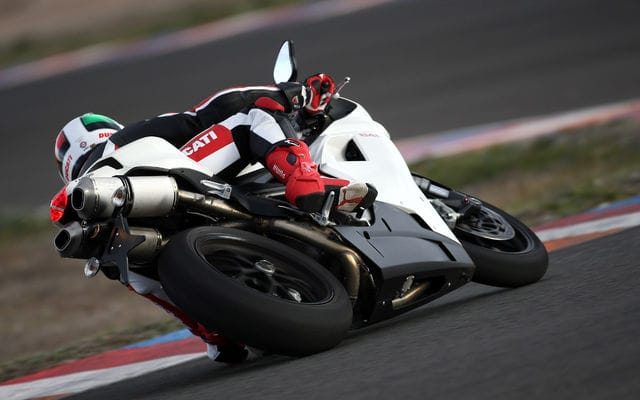 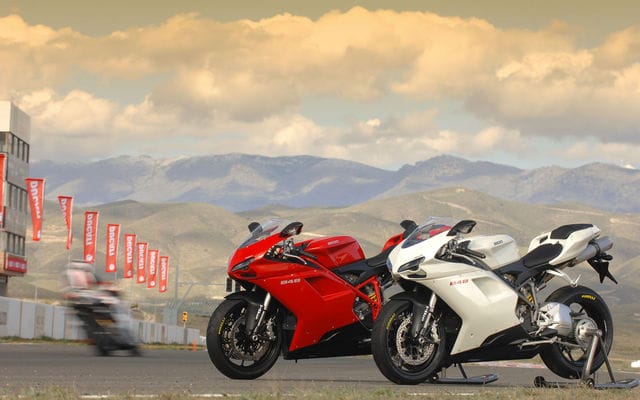 A racetrack has a way of putting one’s skills (or lack thereof) into perspective in short order. I am lapping the Circuito de Almeria, in southeast Spain, and just as I feel I’m leaning the shiny pearl white Ducati 848 Superbike farther than I ever have before, I’m passed on the outside. I am a moving pylon among other journalists, a collection of club racers, a former multi-time Canadian 125GP champion and a top-ranked AMA professional. Despite riding for more than 30â¯years, this is my first time on a racetrack, and my objective is to bring the Ducati and me home in one piece.

The 848 replaces the 749 and is obviously based on the 1098, as it borrows its frame, rear suspension, bodywork, switchgear and instrumentation, and benefits from the weight-saving design work that went into the 1098. This is particularly important with the 848, as one of the major handicaps faced by the 749 was its excessive weight compared to Japanese 600s.

With many parts lifted from the 1098, engineers were able to turn their attention to designing an all-new engine, which is 5â¯kg lighter than the 1098’s. Finite element analysis was used to determine where weight could be cut without compromising strength. A new vacuum die casting technique, known as Vacural casting, saves 3.5â¯kg from the engine cases because it allows high precision and greater ductility for aluminum alloy as it eliminates porosity, gas inclusion and oxidation.

The 1098’s dry clutch is replaced with a new wet clutch, a first for a liquid-cooled Ducati, saving an additional 1 kg. Claimed dry weight for the motorcycle is 168 kg (370â¯lb).

Power production was another priority for the Testastretta Evoluzione engine and the quest began with a bump in displacement over the 749. Bore was increased 4â¯mm to 94 and stroke lengthened 2.4 mm to 61.2, resulting in a displacement of 849â¯cc. Elliptical throttle bodies have an area equal to a 56â¯mm round design, with a single 12 hole injector per cylinder. The exhaust uses a servo-powered valve that broadens the torque band and a catalytic converter is fitted. The result is a claimed crankshaft reading of 134â¯hp at 10,000â¯rpm and 70.8â¯lb-ft of torque at 8,250â¯rpm. This represents a 26â¯hp and 14.2â¯lb-ft increase over the 749. Weight reduction allied with a power boost gives the 848 a power-to-weight ratio superior to the discontinued 999.

Throttle response is instant, in part due to a crankshaft 13â¯per cent lighter than the 1098, and immediately noticeable is the lack of dry clutch chatter, which emphasizes the throaty exhaust note. The engine pulls well across the rev range and feeding the throttle at any speed generates smooth and immediate response. Throttle transitions are noticeably smoother than on the 1098, resulting in a more forgiving ride and allowing me to concentrate on learning the track. Top-end power is good and the 848 charges down the straights with authority, while good over-rev capability saves a shift on shorter sections between turns, though on a few occasions I inadvertently run into the abrupt rev limiter.

The light-action transmission never missed a shift. The lack of a slipper clutch is a liability for me and I manage to get the rear wheel hopping under deceleration, particularly entering the chicane. This is likely the greatest weakness for beginners and less experienced riders on an otherwise user-friendly motorcycle.

As one would expect from a bike that shares running gear with the 1098, handling is similar. However, lighter weight, the reduced gyroscopic effect of the lighter crankshaft and narrower 180/55 rear tire (190 on the 1098) make side to side transitions easier. Pirelli Dragon Supercorsa Pro tires, derived from Ducati’s involvement in World Supersport, suit the bike well.

One key difference between the 1098 and 848 is the smaller bike’s use of lower-spec radial mount Brembo monoblock calipers and 320â¯mm rotors, in place of competition-grade Brembos and 330â¯mm discs. Braking on the 848 is still strong but not insanely so as on the 1098. Serious racetrack aficionados may lament the change but most will get by just fine.

Suspension is similar to the base model 1098 in its use of fully adjustable Showa components, except the rear is not height adjustable and the 848’s fork does not receive friction reducing titanium-oxide coating on the inner fork tubes.

If you like the look of the 1098, then you will like the look of the 848. The model I’m riding is pearl white, which looks particularly attractive, but Ducati red is available for traditionalists. Marchesini five-spoke rims from the 1098 are carried over as well, though with a narrower 5.5 inch rear rim width.

As the day comes to a close, my speed and comfort level increasing exponentially, I finally relax and enjoy myself before pulling into the pits one last time, relieved that I brought the 848 home intact. The $15,995 848 is a quick, capable, user-friendly supersport that encourages the rider to focus on the track ahead. While it shares looks and key attributes with the 1098, namely rock-solid stability, the 848 has a personality all its own—a less intimidating one.