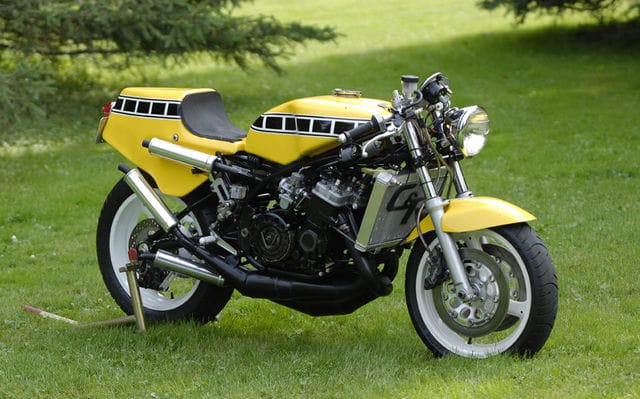 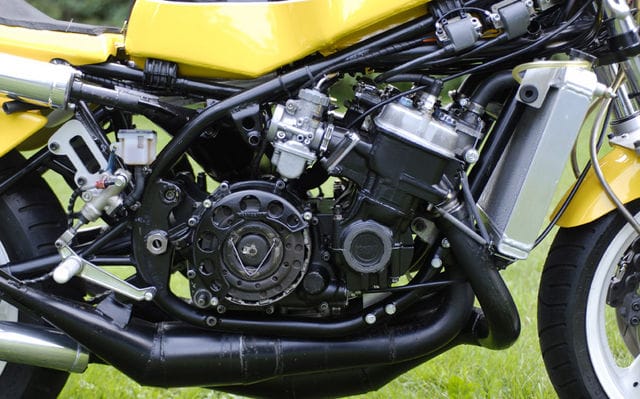 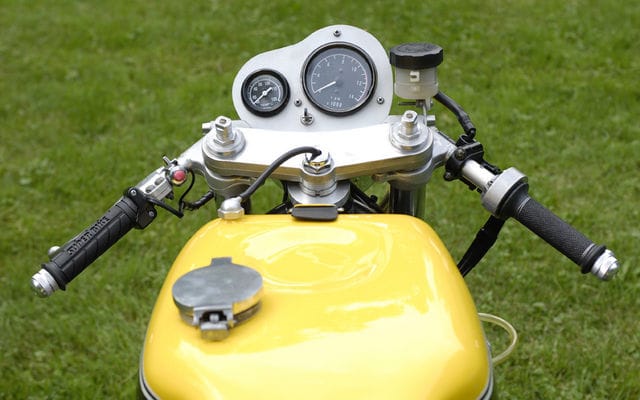 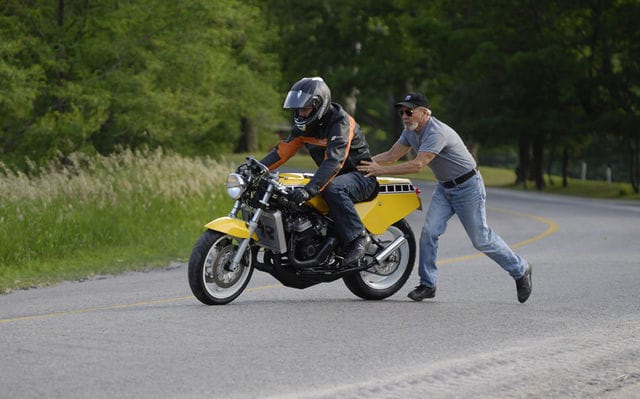 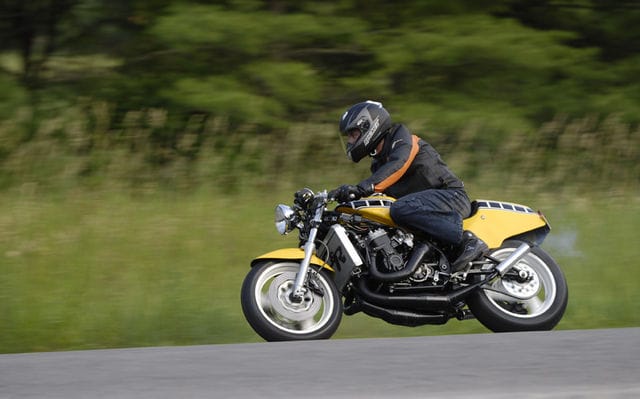 Bar Hodgson’s starting instructions are simple: “I’ll push you and when I yell, dump the clutch.” Easy, except that I’m facing steel gates at the end of his driveway, and after bump-starting a four-cylinder two-stroke race bike, I have to get it stopped before I section myself on the grating into four-inch-wide slices. But I’ve learned that it’s best to show confidence when you’re borrowing motorcycles, and the more they’re worth, the more bravado it’s necessary to show. “I’m ready,” I say, surprised by the breezy confidence in my tone, and a chill shoots up my spine despite 35-degree Celsius heat.

Introduced in 1974, the TZ750 (the first examples were 700 cc but the jump to 750 cc came quickly) was Yamaha’s way to sidestep a weakness in its consumer lineup. Yamaha had success with its 350 cc two-stroke parallel twins, winning at Daytona against larger capacity motorcycles, but it wanted a large-capacity engine to go racing. Its four-stroke parallel-twin street bike engine wouldn’t work as a racing engine, as it was grossly underpowered compared to the three and four-cylinder models of its competitors, so instead Yamaha produced a race bike for the journeyman racer.

The first batch of 266 (AMA homologation required at least 200) instantly made every other racing motorcycle obsolete. Giacomo Agostini won the Daytona 200 in 1974 on a TZ750 in its first attempt, in an era when it was a race everyone wanted to win, and every year through 1982, a TZ750 was victorious at Daytona. If you were a racer with a solid resume and could pay the sticker price (initially $3,600 US), you had equipment very near that of a factory racer. After the demise of the World GP 750 class in 1978, when production stopped, more than 500 had made it into the hands of privateers. The bike continued to race successfully in Canada several years after ceasing production, with riders Miles Baldwin and Art Robbins winning national championships in 1982 and 1985 respectively.

By the time Washington, DC cardiologist Sean Dwyer unearthed a TZ750 in the 1990s, it was stripped to pieces. Dwyer had raced WERA events in the US with a TZ350, and through the “two-stroke grapevine” learned of the new-old-stock UK-made Spondon frame and TZ750 engine languishing in Florida. Given his experience racing a TZ350, I asked Dwyer why he didn’t go vintage racing, instead opting to convert it for street use. “I wanted to build the most outrageous street bike,” he says with a laugh, “but even with a full machine shop it was a lot of work.”

Starting with a service manual, Dwyer rebuilt the engine, a process he describes as “a lot of fun,” before searching for the pieces to complete the project. Wheels and fork are early GSX-R, but aligning rear wheel and engine sprockets took “a lot of time with a straight edge” and necessitated the manufacture of an offset countershaft sprocket, with fewer teeth than stock to lower final gearing, in the hope that it would be “less hateful at low speeds than with the stock gearing.”

Perhaps the single biggest challenge was the exhaust system. Purchased as a kit of individual cones from UK firm Swarbrick, Dwyer welded the can-of-worms exhaust himself. The fuel tank came from the UK and Dwyer tracked down a former maker of fibreglass tail section units now living in Florida. It had been years since he’d made any, and the last one kicking around his shop ended up as his mailbox, but Dwyer was insistent and he agreed to make one more. The Yamaha bumblebee paint scheme was done to honour the racer most associated with the TZ750, former AMA and 500 GP champion Kenny Roberts, and with the bodywork installed, the project was complete.

Most builders of specials admit that the construction is more the inspiration than its use, and Dwyer admits, “The fun part was to build it” and lists pulling into a bike-night parking lot and drawing a crowd as a highlight. But “it was impossible on the street,” and two years after its completion he sold it to fund a car-racing project, a move he now regrets. Eventually it passed into the hands of super-collector Bar Hodgson, promoter of Toronto’s Supershow motorcycle show.

As Hodgson concocts a fuel-oil mixture to be poured into the TZ’s pristine aluminum fuel tank, I test fit the riding position as photographer Hugh McLean looks on sceptically. The footpeg to seat relationship is halfway between a modern sport bike and a pocket bike and, as the photographs would later corroborate, I look like a circus ape on a mini-bike. The TZ’s carburetors do not allow an idle, so as I wait for traffic on the road to clear, I keep the revs up to avoid stalling and to ensure that spark plugs don’t foul. The blat from the exhaust is so enveloping that it seems like the pipes have wrapped themselves snake-like around my lower body, and when I finally join sleepy rural traffic, it’s like listening to the Ramones at a senior’s home—I angrily storm up on moms in minivans while the kids peer out the back window for a better look at the psychopath.

Even though I have no experience on four-cylinder two-strokes something seems off, like I’ve lost a cylinder, as throttle response is no longer lightning-fast. Stopping at the side of the road, Hodgson jumps from the chase van and gingerly touches each exhaust pipe, and sure enough, one has gone cold; it’s now a TZ triple. Even running on three cylinders for the photographs, the TZ is a handful. Reversing direction requires graceless 12-point U-turns, as steering lock is virtually non-existent, and furiously revving an engine while pedalling back and forth to get out of the middle of the road has me soaked in sweat.

We return to Hodgson’s garage for a plug swap, and this time when we bump it off, the cadence immediately tells me that it’s running on all four. For this ride I’m on my own, and as I pull away from Hodgson’s house I’m determined to keeps the revs up in the hope that I’ll keep the uncooperative fourth cylinder interested. I cut onto a side road and hold the throttle wide open and mow through the gearbox. There is no other way to ride a bike like this; if you use restraint, the engine is as miserably uncomfortable as you are.

Up to 7,000 rpm, it’s one motorcycle, but beyond that, it’s something else entirely. Once you’re into the fat part of the powerband, noise from the exhaust and sucking from the carburetors increase exponentially—but it’s the vibration that really astounds. The sensation through the arms and legs stops feeling like shaking and begins to seem like an electric current flowing from the negative polarity of one clip-on to the positive polarity of the other.

For as far as I can see the road is straight, but long rolling hills make it like riding across a rippled potato chip. At the crest of the first hill, the front wheel comes up off the pavement and I back out of the throttle, but the engine hiccups and the chassis twitches. I decide that holding the throttle open is safer than using discretion. I build speed on the downward plunge into the next valley and at the crest of the hill, jut my head toward the front wheel as it lofts skyward, accompanied by the sensation of no road beneath the front wheel. Up until now the TZ has sensed, like a horse, the tentativeness of its rider, but now it’s happy, because once you’ve raced the high banks of Daytona, anything other than full acceleration on the way to top speed is hardly a life worth living, and as someone who’s just along for the ride, I’m tempted to agree.