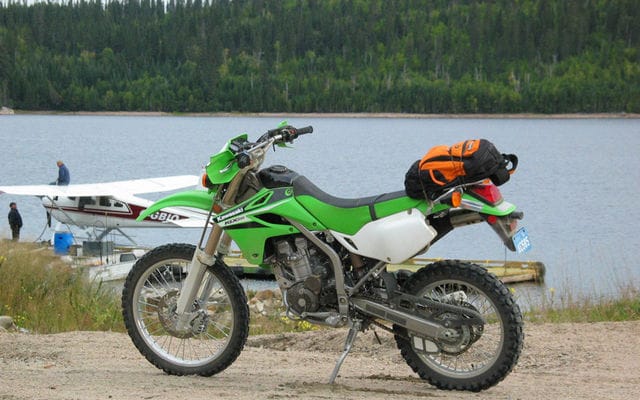 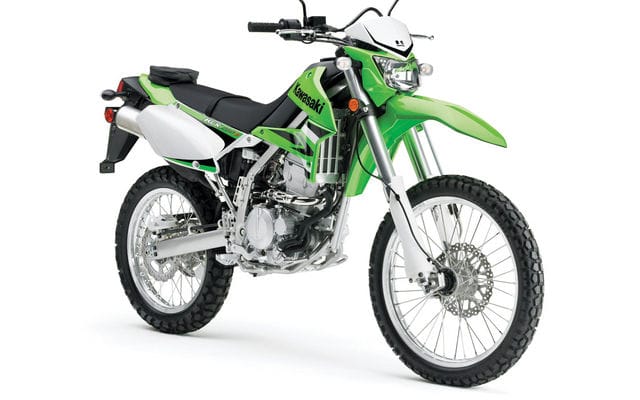 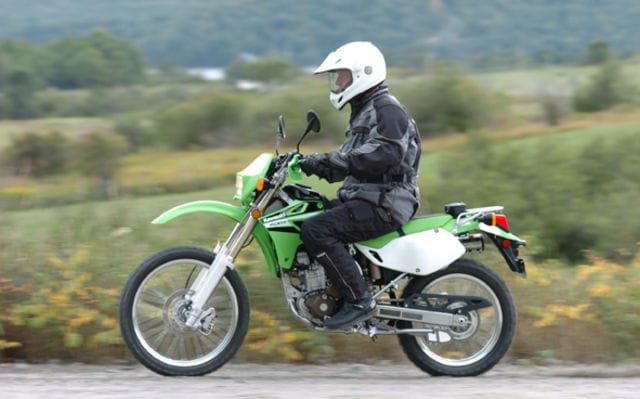 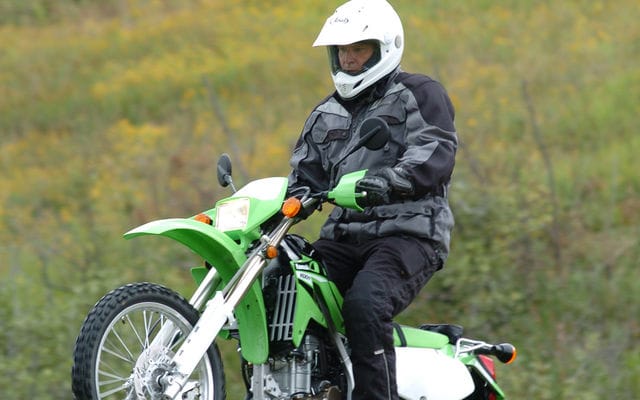 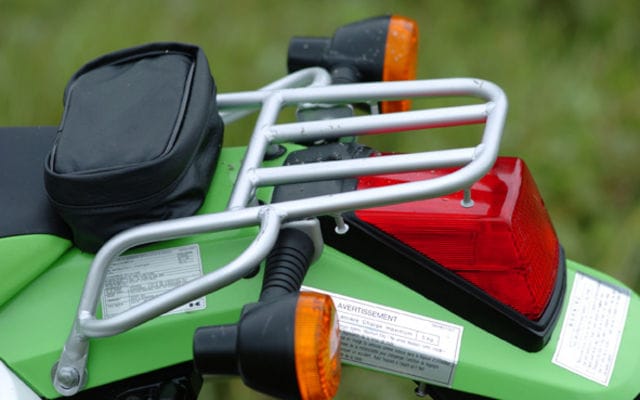 The temptation when riding off-road, just as it is on the street, is to go for a motorcycle with more displacement than necessary—a surfeit of power is too much for most of us to refuse. But it is almost always an indulgence best avoided, especially if you’re expecting long days in the saddle heading deep into the Quebec north woods.

Kawasaki’s KLX250 is an easy machine to overlook. There is nothing revolutionary about its engine or steel frame, and its components do nothing to dissuade you that it is just another low-spec, moderately priced ($5,999) playbike. Power from its liquid-cooled 249 cc four-valve twin-cam single is rated at a lowly 24 hp, and torque at an equally modest 15.6 lb-ft, but the redeeming character of the counterbalanced engine is its smoothness. Even at its power peak of 8,500 rpm vibration is, thankfully, entirely liveable, because to make this machine move it is necessary to have an aggressive throttle hand and dexterous shifting foot, because when revs drop, so does forward motion.

A big chunk of the 885 mm (34.8 in.) seat height is soaked up by the softly-sprung suspension when laden, aiding confidence in the tight going, so when it’s necessary to put a foot down for a light dab to keep upright it doesn’t feel like you’re shimmying down off a Clydesdale. And for the occasional off-road get-off, electric start saves you the indignity of having to kick a motorcycle to life that has just kicked you out of the saddle. And the catalyst-equipped engine is so quiet that your mates will never be able to claim that they heard you stall the engine—they probably couldn’t hear it in the first place.

Suspension components are budget-spec but work quite well. The 43 mm fork is adjustable for rebound and compression damping, and the rear shock for compression damping and spring preload. Settings are soft and the machine bottoms when landing from modest jumps, but does so without jolting the rider.

Our test bike has a skittish front-end feel, caused by too much rear suspension sag, which we hope to improve by increasing the preload on the rear shock. Unfortunately, a lack of clearance around the shock means the supplied wrench in the tool kit doesn’t work, so we resort to the less sophisticated method of clubbing the adjustment ring with a tire iron and trailside rock, which mars the adjusting ring. The change helps to make the front wheel more planted, but we can never entirely make feedback as trail-sensitive as the KTM 530 EXC that accompanies us on the trip, though these bikes are at opposite ends of the dual-sport spectrum. While the KLX never approaches the athleticism of the KTM —lacking its fabulous front-end feel—it enables beginning to moderately skilled riders to hone their off-road skills without feeling intimidated.

The diminutive Kawasaki trumps the KTM, as well as several other dual-sport machines, in comfort. At anything less than a tree-blurring pace the KTM pounds its rider with its firm, competition-ready suspension, while the KLX floats across logs and rocks and wades through streams in luxury. In an entourage of more serious off-road machines, boarding the plush and easy-handling KLX was relieving. As the pace quickens bigger bikes are gone, of course, but the Kawasaki keeps up easily in normal riding conditions.

Soft power delivery is a blessing in slippery conditions, and in mud or loose gravel feedback from the Dunlop D603 knobbies is exemplary—it is nearly impossible to dial up too much power, too quickly, and lose traction—and holding the throttle to the stop while rowing through the gearbox is great fun.

Moderate horsepower can also be a curse because the bike won’t haul you out of any problem in any gear. Rounding a corner on a smooth, fast trail only to see a steep incline peppered with boulders the size of garbage cans means a panicked downshift from fifth to second gear and a frenzied climb with the engine screaming. But all that matters is that we crest the rise, the soft suspension allowing the wheels to follow the jagged surface without bouncing the bike into the air, while the modest power provides a surprising amount of rear-wheel grip. Other machines in our group with more power and prestige break traction and turn around for a second run at the hill.

Another drawback of low power is that it limits the KLX’s ability to be steered by the rear wheel. Our test route includes fast fire-access roads with surfaces as greasy as waxed linoleum, and the desired technique in turns is to gas it up and have the back end step out slightly, flat-track style, to limit the risk of front wheel washout. Lacking the oomph to kick the back wheel out on the throttle, it is necessary to slide your body to the very front of the broad and generously padded seat to lighten the rear wheel enough to cause it, hopefully, to step out.

Top speed on perfectly flat roads is an indicated 120 km/h, entirely respectable for a 250, but that number drops quickly to 100 km/h if even the most modest of inclines is encountered. The KLX proves to be very stable over rough roads, riding over ruts and loose gravel without wavering, while its off-road oriented contemporaries wiggle handlebars and wag tail ends, even at those speeds. Brakes are well balanced, providing good stopping power without being overly sensitive, traits which are beneficial to the budding off-roader.

In an odd decision by Kawasaki, there is no 2008 KLX250 (the model on test is a 2007). Instead, it returns with updates as the 2009 KLX250S, available at your Kawasaki dealer in spring 2008, which would seem to make it an ’08 model, regardless of what its manufacturer says. The new S version (price as yet unannounced) has mild mechanical and cosmetic revisions, and employs the same basic engine with a new version of the steel frame. Among other changes, Kawasaki claims smaller, more efficient radiators for improved cooling and a shorter sixth gear, which is a wise move, as our test bike is barely able to pull its overly tall sixth gear. Also new are bigger brakes, revised suspension settings claimed to increase stability and feedback, thicker spokes for durability and a digital dash.

After three long days in the saddle the KLX250 proved its worth, as it kept up with more powerful machines and pampered its rider with a plush ride. This is not a bike for the serious off-road rider, but rather a good choice for a beginning rider interested in exploring the local woods, yet who also wants a lightweight and economical street bike. Its small displacement also means it will be easy on the gas pumps; mileage tallied entirely off asphalt—and mostly flat out—was an impressive 4.7 L/100km (60 mpg) and range from its 7.2 L tank was 150 km.

While it’s tempting to look past the KLX250 to Kawasaki’s own KLR650, at only $600 more, the latter is a much bigger motorcycle than the 250, and sometimes less weight and power equates to more fun to be had.