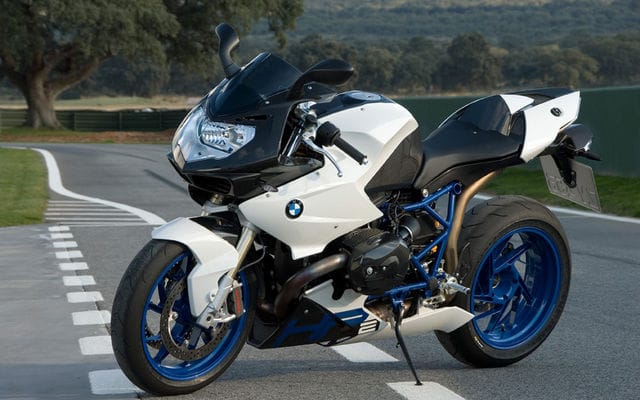 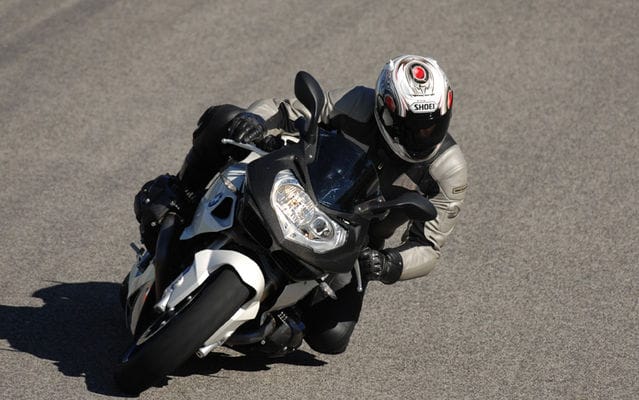 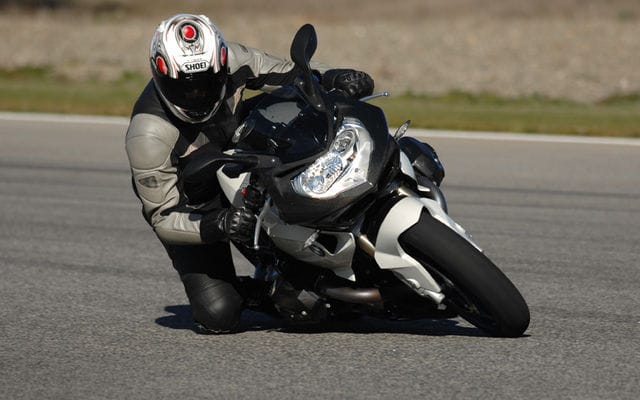 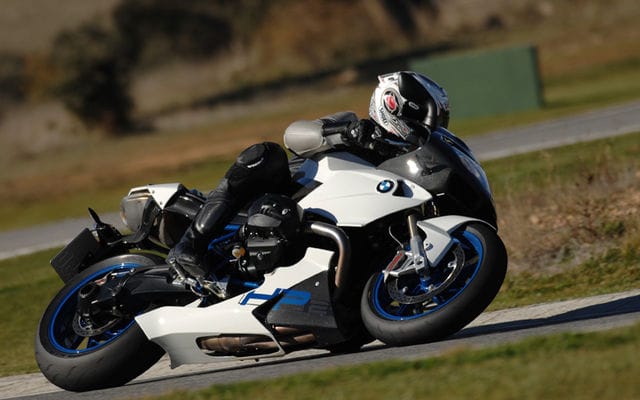 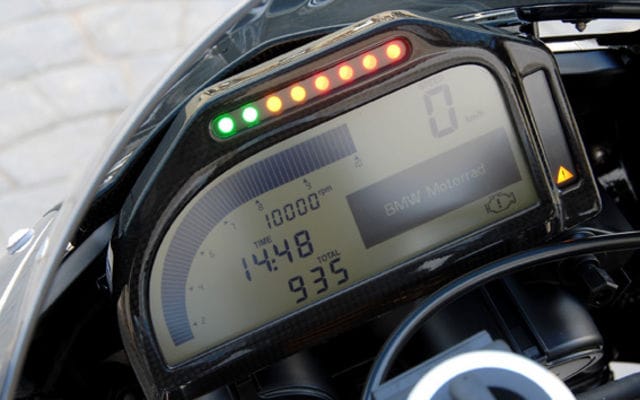 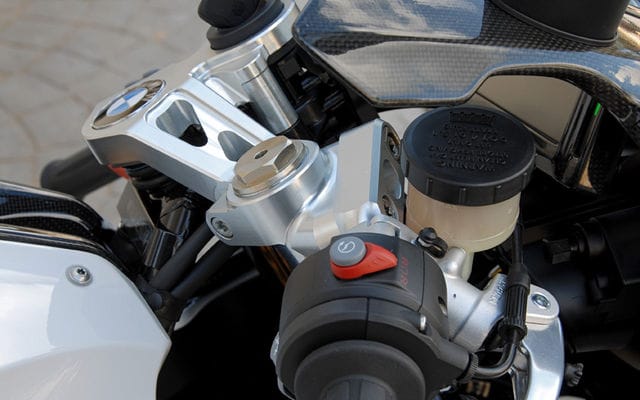 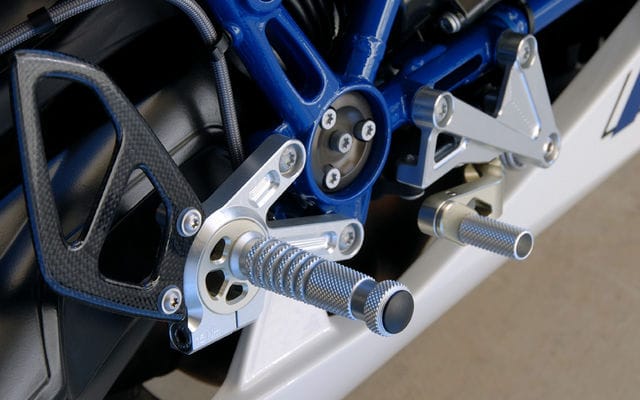 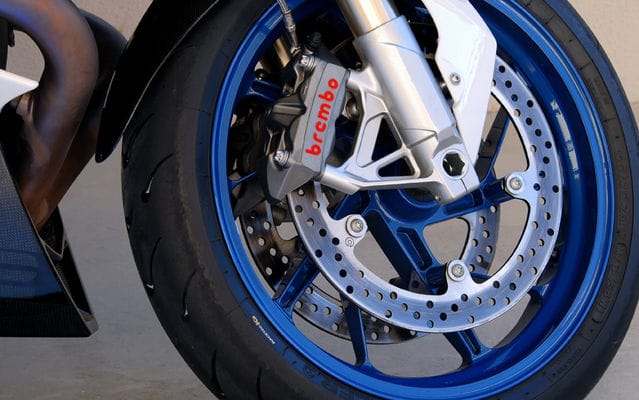 In 1986, one year after the introduction of the category-breaking GSX-R750, Suzuki introduced the GSX-R750 Limited, a race-ready production motorcycle (the one with the dry clutch, remember?) designed to go from shipping crate to circuit with minimal preparation. More than two decades later, BMW, probably the least likely of all motorcycle manufacturers to produce such a machine, introduces the HP2 Sport, a machine that, like that original GSX-R, has its roots in endurance racing.

Traditional BMW-philes who may be considering buying a Sport should make no mistake, this third model in BMW’s HP2 line is no sport-touring machine disguised as a race bike; this is a purebred competition motorcycle with street lighting. At a German round of the Endurance World Championship, the racing R1200S on which the Sport is closely based finished a remarkable fifth place overall in a field dominated by Japanese inline fours, and was just over two seconds per lap slower than the winning factory GSX-R1000.

Many components developed by the BMW Motorrad Motosport factory race team have transferred directly onto the Sport, including the billet aluminum adjustable footpegs (with easily reversible shift pattern), adjustable clip-ons, billet top tripleclamp and fully adjustable Ohlins front and rear suspension with the same spring rates as the race bike.

Another racing component is the digital dashboard, manufactured by 2D Systems, maker of MotoGP instrumentation. The instrument panel was clearly developed by someone riding at speed and focusing on the road ahead, as it is the best LCD display I’ve seen so far on a motorcycle. It is large, easy to read, and the bar tachometer is clearly visible, as is the row of LED shift lights, which can be programmed to light either sequentially or simultaneously at the desired rpm. The digital display can be viewed in two modes: street mode, which features larger speedometer digits and smaller gear indicator digits; and race mode, which reverses that layout, though both modes can be custom tailored to a rider’s preference. Also displayed in race mode are lap times (the bike is wired to accept a trackside transponder, sold separately), top speed, average speed per lap, number of shifts per lap, and a slew of other information, all of which is recorded and can be uploaded onto a computer for riders who take lapping seriously.

One item that sadly didn’t make it onto the street bike is the 23-litre fuel tank; a meagre 16-litres is all you can squeeze into the street Sport.

The Sport’s most race-inspired feature, and a first on a street motorcycle, is the electrically assisted quick-shift, which allows shifting without the clutch and with the throttle held wide open. It works perfectly on the racetrack, providing you use it as designed—at high speed. At lower speeds or with the throttle partially open, clutch-less shifting is erratic, the bike lurching as the ignition interruption is a fraction of a second too long. Shifting with the clutch (as one would on the street) overrides the quick-shift system, and gear changes are very smooth. The system works much better than the one fitted to the K1200R BMW Cup bike I’d ridden here at the Ascari Race Resort two years ago, which had too long a delay when cutting the engine, making full-throttle shifts sloppy.

A newly developed double-overhead-cam engine was tested on the race bike and produces more horsepower and torque than the R1200S engine. The added power pushes a lighter machine, as claimed dry weight is 178 kg (392 lb) without optional ABS (versus 190 kg/419 lb for the S with standard ABS). Power arrives in typical Boxer fashion: broad and flat, with the fattest torque arriving well ahead of redline—short-shifting works better than trying to wring the last few hundred revs out of the engine.

Throttle response is very smooth and easy to modulate without upsetting the chassis in turns. Gear ratios are unique to the Sport, with taller first and second gears than on the R1200S. The gentle power delivery doesn’t give much of a sensation of speed, but the speedometer indicates otherwise, showing 240-plus km/h on the front straight and climbing, and that’s at 750-metre elevation, where lower atmospheric pressure reduces engine output. Twin counter-rotating balance shafts negate the Boxer’s tendency to lurch sideways when blipping the throttle, while reducing vibration to a mild throbbing felt through footpegs and clip-ons.

Although more focused than a typical BMW sport-tourer, the HP2 is not typical of the latest supersport machines either. It is tall (830 mm/32.7 in. seat height), even with its ride-height adjustable suspension at the lowest setting. The bike feels long, with lots of legroom, and when seated there’s much more machine ahead of you than the latest from Japan, as you sit farther to the rear. The Sport uses the engine as a stressed member, as does the S, and uses a slightly modified R1200S frame, which consists of separate forward and rear sections made from tubular steel, but a carbon-fibre subframe replaces the S model’s steel item. Bodywork is also constructed from carbon fibre.

Once rolling, the HP2 differs greatly in feel compared to a razor-sharp supersport, mostly due to the Telelever front end, which has very different road feel than a telescopic fork and requires an adjustment in riding style. Trail braking does not favour the Sport; all braking should be done before you tip the machine into a turn. The Sport dives very little while braking and steering geometry remains constant, as opposed to telescopic fork equipped machines that tighten up when nose-diving into turns. If you stay on the brakes on the BMW as you begin to lean, front-end feel diminishes and the bike resists turning and runs wide. It also resists mid-turn corrections; once it sets on a line, it maintains it to the exit; there’s no tightening up if you run wide. I compensate for this by leaning farther off the machine and placing my body as far forward as possible, though this puts my knee squarely on the cylinder head.

The Sport demands a smooth riding style, with deliberate, nearly mechanical input required from the rider: release the clutch progressively while downshifting when braking so the rear wheel doesn’t hop (I repeatedly miss the apex of two turns at Ascari that demand hard braking, as the bike chatters hard, causing me to release the brakes—until I adjust my riding style and brake sooner and smoother); brake while upright; release the brakes and begin to turn while leaning far off the machine so the heads don’t touch the ground. Get the sequence right and you can go very fast with minimal physical exertion. I now know why this bike does well in endurance races.

Brembo provides the latest radial-mount four-piston monoblock calipers, and braking power is worthy of a race bike: fiercely strong with good feedback and minimal fade. ABS is optional and can be turned off.

With the throttle pinned and the shift lights illuminating about 800 rpm shy of the 9,500 rpm redline, where I programmed them to do so, I nudge the shifter into fifth gear, throttle still wide open, and approach 220 km/h while leaning right through Ascari’s fastest section. The Sport exhibits uncanny stability at speed, the trade-off being slower steering response. BMW’s own HP2 Megamoto turns in quicker (it uses an inverted telescopic fork) but wavers about more, and has less cornering clearance than the Sport, though the first things to touch on the Sport are the heads (footpegs beat the heads to the ground on the Mega).

By the last session of the day I’m very comfortable on the Sport. It has a distinctly Bavarian feel, with a very refined suspension, which despite being race-spec, feels softer than most supersports. My pace is quick and I catch up to invited guest and endurance racer Stéphane Mertens, who is leading a slower rider around the course. As I approach, Mertens sees me and picks up his pace. I follow, picking up his cues and riding both smoother and faster than I was before. The chatter problems I was experiencing earlier are now gone, as I’m braking sooner, though my cornering speeds are higher. On the Sport, you really have to slow down to go faster. The machine flows fluidly through esses and feels reassured when at maximum lean.

Once leaned at speed on the Sport, however, you’re constantly aware of the bike’s cornering limit, as the heads skim the ground, their specially designed and replaceable protective covers hissing in warning. Ride height can be raised 22 mm and 30 mm front and rear respectively, allowing increased cornering clearance and slight variations in chassis geometry for different track layouts, though I leave both as is.

Traction provided by the original-equipment Metzeler Racetec radials allows extreme lean angles at the racetrack, otherwise ample cornering clearance is available even with ride height at its lowest, which benefits street riding. Raising the suspension to its maximum (front adjustment requires removal of the shock, rear is adjusted in place) adds two degrees of lean angle, which would have been useful to me on one occasion, when immediately after Mertens let me by to let another rider follow him, I enter a right-hand turn too hot and bounce the head onto the ground hard enough to lift the front wheel. I run wide onto the (fortunately) paved run-off area, right the bike and continue back onto the track no worse for wear.

This direct transfer of technology from track to street certainly makes the HP2 Sport the most radical street-legal flat twin ever produced by BMW, however, this performance comes at a cost—a very high cost. For the price of an HP2 Sport ($26,640), you can pick up a brand new R1200S ($16,500) and have enough money left over for the new F650GS parallel twin ($8,990), as well as enough change for a couple of quality helmets. BMW salespeople will have their work cut out for them in the showroom.