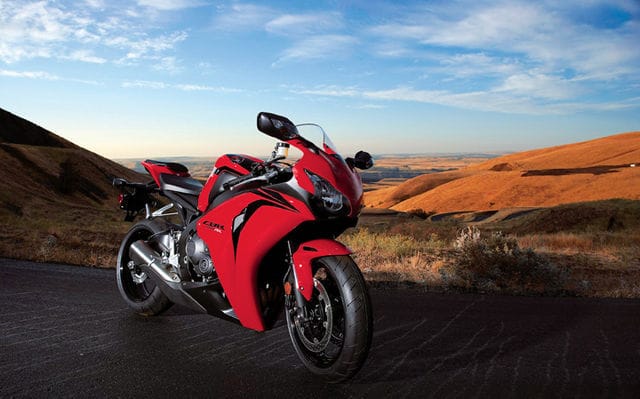 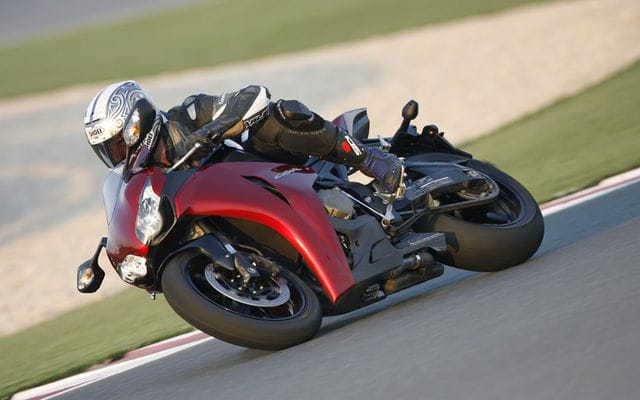 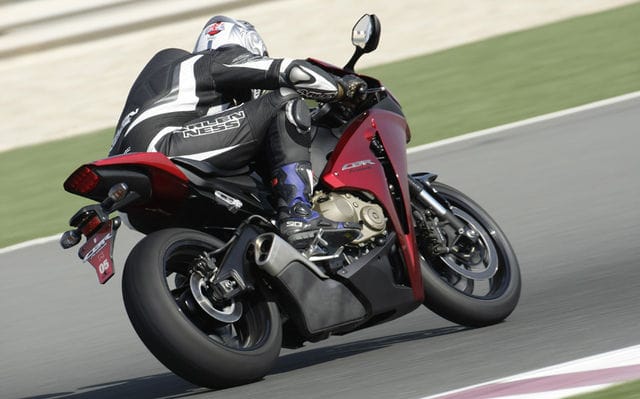 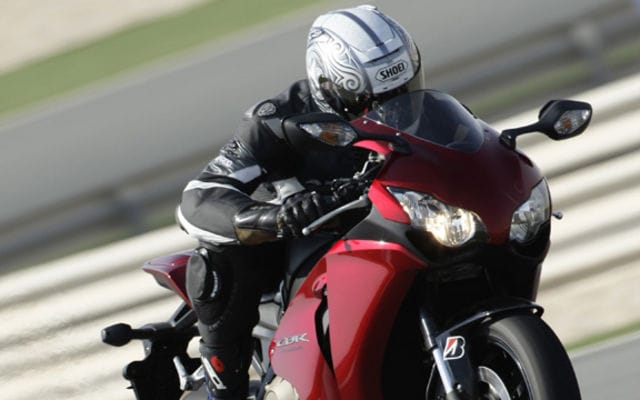 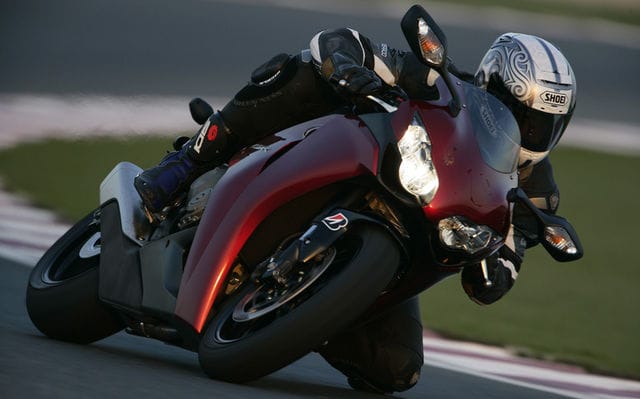 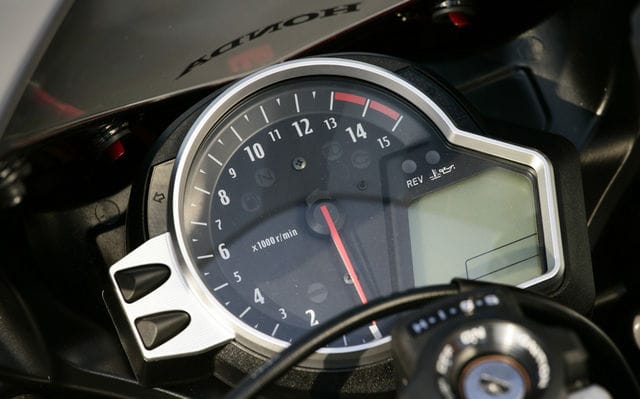 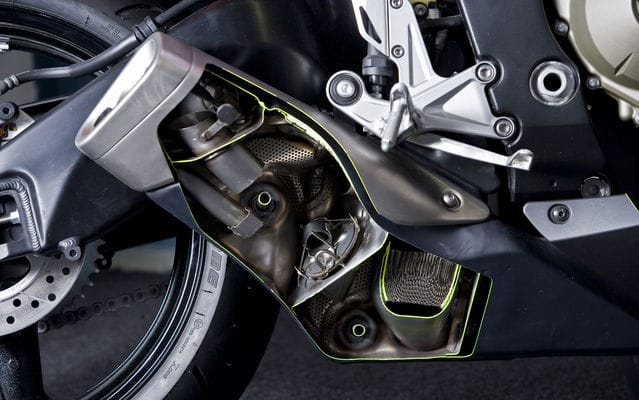 By now you know the drill. Honda redesigns the CBR1000RR for 2008 and the standard claims apply: it’s lighter, faster and more nimble.

Shifting through the gears on the new CBR1000RR at Losail International Circuit in Doha, Qatar, is painful, but not because of any gearbox problem. I’m hurting because my sock-less feet are scrunched inside boots two sizes too small. This is the second consecutive press launch where my luggage takes a mysterious leave of absence, forcing me to borrow riding gear. Despite my blistered toes, I happily continue riding, as the claims we’d been fed during the technical briefing are true: the new CBR1000RR is much improved.

The pre-ride briefing bombards me with marketing terms all too familiar of late: optimised weight balance, centralised mass, maximised power and reduced weight. Then a claim was made I’d not heard before promising a “deep soul experience.” Before riding the bike, and my “tender sole experience,” I’m taken by the machine’s appearance, which despite early criticism on web forums is quite attractive in the metal, especially in dark red, a colour that’s not available in North America.

Smooth fairing panels are a refreshing departure from the angular and busy designs of competing machines, and the blade-like tail section, which no longer supports high-mounted exhaust mufflers, was probably a single swish of a designer’s pen on paper. Although the blunt nose looks disproportionate in photographs, it looks good in person and makes the bike feel even smaller when seated, as it disappears from view beneath your chin, though this is also because the seating position is shifted 10 mm forward and down. Clip-ons are 6.5 mm higher and 2 mm farther forward, contributing to a very snug-fitting cockpit.

Honda’s CBR1000RR is the only new Japanese open-class supersport claiming a weight reduction (down 4 kg from the previous model); other manufacturers’ machines have crept up the scale, mostly due to heavier catalytic-converter-equipped exhaust systems mandated by Euro-3 emissions regulations. Although no dry weight is given (199 kg/439 lb wet), based on last year’s bike the reduction should put it at 172 kg (379 lb) dry—among the lightest in its class. One might argue that because Honda is not on a two-year redesign schedule with its sport bikes, there was a lot of weight to be saved, though the changes didn’t stop there.

The engine is completely new, with a larger 76 mm bore and shorter 55.1 mm stroke (75 x 56.5 mm previously). External dimensions are more compact, and the engine is responsible for 2.5 kg of the CBR’s weight loss. The crankcase now has a separate, sleeveless cylinder block with cylinder bores 1 mm closer together. A lighter, more compact cylinder head uses lightweight titanium intake valves that are 1.5 mm larger in diameter at 30.5 mm, while steel exhaust valves remain 24 mm. A revised dual-stage fuel-injection system uses larger 46 mm throttle bodies (previously 44 mm) with 12-hole injectors for finer fuel atomization. These changes translate to more top-end power at the cost of some low-end to midrange grunt.

Despite the reconfigured torque curve, the CBR still transfers its power smoothly and progressively, gaining momentum quickly as revs climb. More importantly, the power is easily controllable. Exiting the Losail circuit’s slower turns, I feed in throttle and am rewarded with smooth, hard acceleration. Throttle transitions are silky smooth and confidence inspiring, more so than on other 1000s. Also helping to smooth power delivery is an unusually shaped, low-mounted, catalyser-equipped muffler, which contains several chambers and two valves: a central spring-loaded valve and an electronically controlled valve that shuts the larger tailpipe outlet. At lower speeds both valves are closed, increasing torque while deadening sound, and at high speed they open, allowing freer exhaust flow and an appealing, yet still subdued wail.

The bike’s power delivery is deceptive, as there’s no hard hit in the powerband—but make no mistake; it’s brutally fast. I glimpse 284 km/h on the front straight pulling hard in fifth gear before slowing for the first turn.

A new four piece frame (down from nine) gains 1.4 kg; an increased stiffness is the likely culprit for the added mass as rigidity is up 13 per cent laterally, 40 per cent torsionally, and 30 per cent vertically. Lighter chassis components include brake callipers, discs, wheels, subframe and a smaller, electronically controlled steering damper.

Although steering geometry is only slightly altered to 23.2-degrees rake, 96 mm trail and 1,405 mm (55.3 in.) wheelbase from the old bike’s 23.5 degrees, 100 mm and 1,412 mm (55.6 in.), the stiffer chassis and redistributed weight greatly affect handling. The CBR now steers with much lighter effort, turns in quicker and is easier to flick through tight turning transitions. Front-end feedback while trail braking is very good, while the balanced throttle action smoothes the transition from braking to accelerating while leaned.

Initially, suspension settings are too soft (and we’re on stock Bridgestone BT015 tires) and the bike’s rear suspension bounces while shifting gears through a long and very fast left-hand sweeper, making the bike squirm. In later sessions, the suspension is firmed up and BT002 racing rubber replaces the stock tires, after which stability at speed is excellent. Compared with the old bike, however, the exceptionally solid feel at full lean is diminished. The machine is no less competent than it was, probably more so; it just feels different. I discuss this perception with one of the engineers, who attributes it to the machine’s reduced weight.

A slipper clutch is added, another improvement over the old model, and it incorporates a lockup feature allowing lighter lever effort, while providing slip-free operation under high load.

Braking is remarkably hard and smooth (calipers are now solid pieces), and combined with the slipper clutch and Honda’s IACV (an electronic idle-air control valve introduced on the 2007 CBR600RR that smoothes throttle closing), contributes to quicker corner entry. A slight pulse is felt at the clutch lever when it is released on deceleration, but this is common on a cable-actuated slipper clutch.

In my last session of the day I ride hard and think that I must be flying because the rear is beginning to slide at full lean as I hit the apex. Thus far, the stickier Bridgestones have exhibited flawless grip, though now the bike slides regularly, yet predictably. It’s only after my return to the paddock that I realize I could have easily binned the machine: the rear Bridgestone is shredded, with layers of rubber coming off like a peeled onion. The tire is obviously defective, and for now at least, not an indication of a problem with this model. Bridgestone engineers scurry to roll the bike into a garage and later apologise for the inconvenience, telling me the tire would be sent to Japan for closer inspection. I thank them for their concern and tell them I’m pleased to have taken part in their R&D program.

I can also attribute the fact that I didn’t fall to the machine: the new CBR1000RR provides the road feel and linear throttle response that translates to a heightened sense of control, which on an open-class supersport is the most cherished of traits. I just wish it had retained another important trait, and one that can actually stir the soul: some of its unique character.