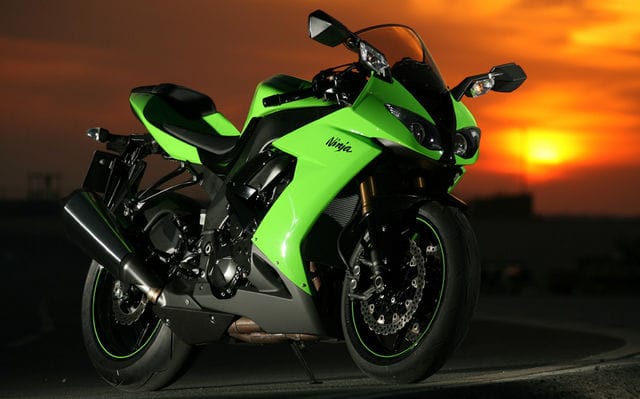 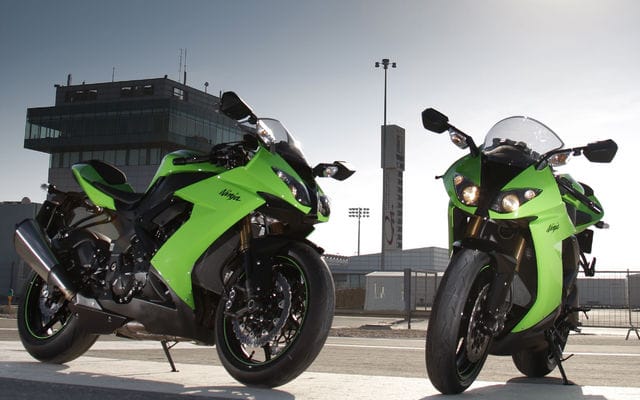 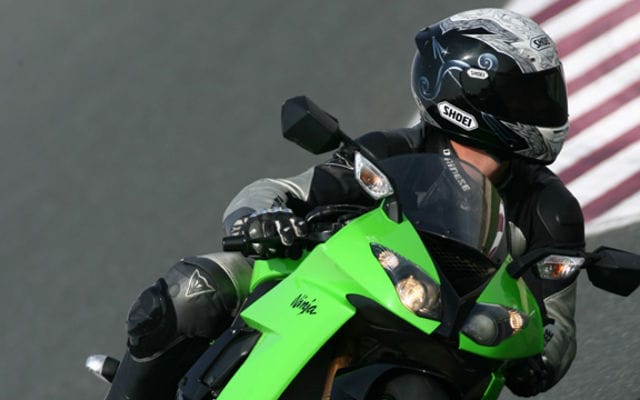 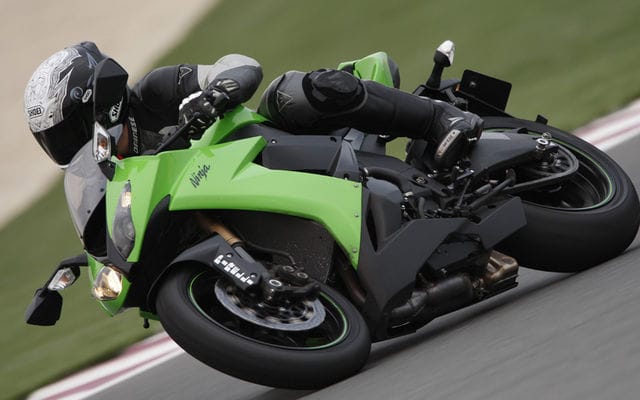 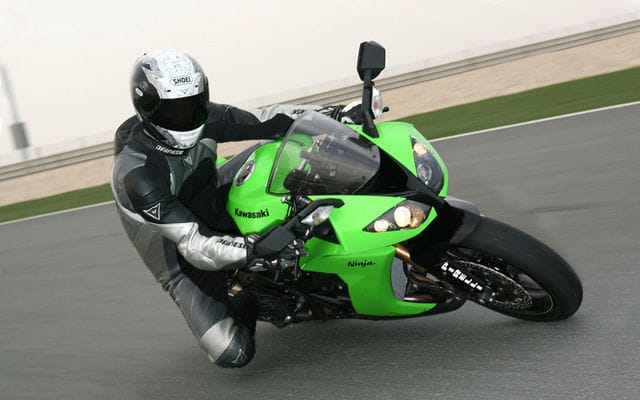 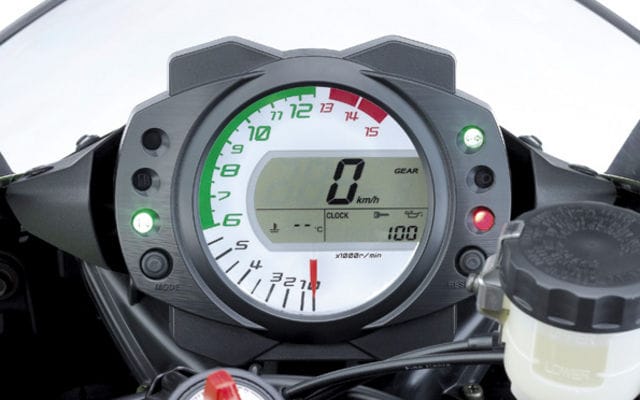 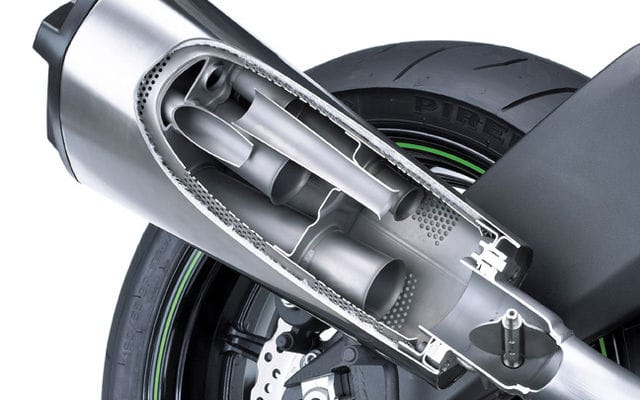 My eyes drift past the presenter and gaze out the window across the Qatari desert. The sense of desolation is so profound that my skin pebbles in goose bumps and my mouth dries, anticipating the heat. It’s hard to concentrate on the presentation because the Italians seated behind me are bantering to-and-fro at operatic volume and at speeds comparable to the 2008 Kawasaki ZX-10R we’re about to ride on the racetrack—but I’m getting ahead of myself.

The room of magazine hacks (excepting the Italians) sits silently, trying to understand why a feature that sounds like traction control is not, the presenter insists, traction control. I think of the old chestnut: if it looks like a duck, and sounds like a duck, it’s probably a duck. But no, Kawasaki’s Ignition Management System (KIMS) is not traction control, because, he says, with just a hint of exasperation, you can still highside the bike if you’re an idiot with the throttle. I fold forward in my chair; I will not be able to hold the throttle wide open with impunity, as I’d been hoping in the weeks preceding the launch. It will be like any other motorcycle; I must rely on skill, and this makes me nervous. Just as we’re about to head to the paddock the presenter has a final request. “Please sign the waiver,” he asks, “just in case.”

Canadian racetracks, with the possible exception of Mosport with its long straightaway, do not suit open sport bikes. Just as the throttle is wound on it’s time to roll it off, but the Losail circuit is different. The front straightaway is long enough to land a jet, and the pavement, freed from the cycles of freezing and thawing, is not scarred—a prerequisite at most Canadian tracks. If it’s good enough for MotoGP, I think to myself as I don my helmet and fit my gloves, it’s good enough for me.

Entering the track for my first session I’m still trying to understand the function of the KIMS system, though a post-presentation chat with engineers had helped to dispel some of the misunderstanding. The electronics monitor engine speed, throttle position, vehicle speed, gear position, intake air temperature and pressure, engine temperature and, most significantly, change in engine speed on acceleration. According to Kawasaki, “Should a significant, sudden change in engine speed be detected, ignition timing is altered to slow engine speed.” Kawasaki says that if the rider opens the throttle aggressively the system assumes that the rider knows what he’s doing and doesn’t get involved. But if the system detects a sudden spike in revs on a steady throttle, which would indicate wheel-spin and loss of traction, then it assumes you’re in a bit of a jam and steps in to curb power delivery. Examples would be if you’re sliding under power and the rear wheel picks up speed dramatically, indicating a loss of traction, or, more typically, a run in with gravel at the edge of a roadway that causes the rear tire to spin.

Beginning with last year’s ZX-6R, there seems to have been a shift in Kawasaki’s approach to its fleet of sport bikes. Where they once prided themselves on making aggressive machines for unrepentant nutters—the last generation ZX-10R was a peaky, nervous handling thoroughbred—it is an approach that found limited success on the racetrack. What wins races and championships for other brands is predictable and controllable power incorporated in a chassis that allows the rider to know exactly what is happening where tire meets tarmac.  I have a hunch that Kawasaki looked at its dismal racing record and finally acknowledged that peaky powerbands and nervous handling died with two-strokes.

“We wanted a highly communicative package that would enable a two-way dialogue between rider and machine,” says Kawasaki, and after just a few corners the machine ingratiates. Even with the standard fitment Ohlins steering damper backed off considerably, stability is excellent. The complexity of chassis design means non-engineers are baffled by the nomenclature. Kawasaki claims rider feedback is improved now that concave frame components have been replaced by convex frame components. Additionally, the drilling of a large “resonator hole” is said to have helped, too, but my favourite claim is that additional ribbing near the frame’s upper cross member is said to slightly slow feedback from the frame to the rider.

A listener need not understand the cello to be moved by its playing, just as it is unnecessary for a rider to understand technical jargon; all that matters is sensation, and here the Kawasaki excels. Its cockpit is sensibly designed, with a narrow front seat portion and a thin-between-the-knees fuel tank that allows easy hanging off while cornering. The large-diameter analogue tachometer is easily read, but the centrally located digital LCD speedometer is dim, especially for a quick glimpse down at speed—which may be a blessing, as the Kawasaki is, as all 1000s are, furiously fast.

Kawasaki acknowledges that fallible humans will ride the ZX-10R and fitted Tokico radial-mount calipers and 310 mm petal discs, which have solid stopping power, but just as importantly, great feel and forgiving modulation.

Kawasaki’s mention of a shorter seat hardly seems worthy of note, but on the front straightaway to a top speed in the high 270 km/h range the bump stop for the tailbone makes it easier to keep the arms relaxed. This is a necessity, because acceleration is so strong that the front wheel skims the pavement for most of the way up to 200 km/h, and relaxed hands prevent unwanted sawing back and forth of the clip-ons.

While the engine is startling for its power, what impresses is its civility. In the search for boosted power down low, exhaust valves came down in size from 25.5 to 24.5 mm, with reshaped ports to suit, but top-end power was hardly ignored. Revised fuel injection now features secondary fuel injectors, oval throttle bodies and reshaped intake ports. Both intake and exhaust valves are now fashioned from titanium, camshafts have higher lift and the ram air duct has been redesigned to funnel more air less noisily to the airbox. Transmission ratios have been revised as well, with first, fourth and fifth gear ratios lowered, along with a tooth added to the rear wheel sprocket to lower overall gearing, evidence that the taming of the ZX-10R has not come at the expense of high-rpm performance.

The Losail circuit, in addition to the fast back straight and sweeping high-speed corners, has slower second-gear corners that the ZX-10R dives into with remarkable ease. For a litre-bike, the ZX feels pleasantly nimble, perhaps partially attributable to the 1 kg lighter crankshaft and the abandonment of the heavy under-seat exhaust system. Long deemed a styling necessity after the introduction of Ducati’s 916, the downside of having a heavy muffler hanging far off the rear of a motorcycle is self-evident. The new exhaust system has a pre-chamber underneath the engine and a triangulated canister that exits low on the right side.

I’ll admit to never completely coming to agreeable terms with the old ZX-10R, as it demanded from me a level of skill I am unable to provide. But the new bike is a much more accommodating motorcycle. Losail has a fast right-hander that frustrates me throughout the day, as it is a corner that I am unable to gauge correctly, regardless of how many sessions I ride. Mid-corner I always realize that I’ve entered too slowly, and I’m exasperated until a colleague points out what should have been obvious. The speed as you’re beginning to lean into the corner is over 200 km/h, and while my mind is wondering about the level of medical care in Qatari hospitals should I lose the front end and compact myself into little pieces, the ZX is predictable and trustworthy. Before the heat wilts me at the end of the day, I bump up my nerve and hold the throttle open for an extra steamboat at corner entry. I clip the apex and run to the edge of the track at the exit, and though I’m banked over so far that my elbow is nearly on the ground, the ZX is entirely stable and refined.

And what about the fancy electronics and the KIMS system? I never noticed it, and from what I could garner from other testers, neither did they. Which doesn’t mean that it doesn’t work—perhaps you need to be in a crisis to sense it—but what’s best about the ZX-10R is that its refinement means that you’re much less likely to need electronic help. I’ll take that over a bad-mannered hothead any time.

Photos by Gold and Goose