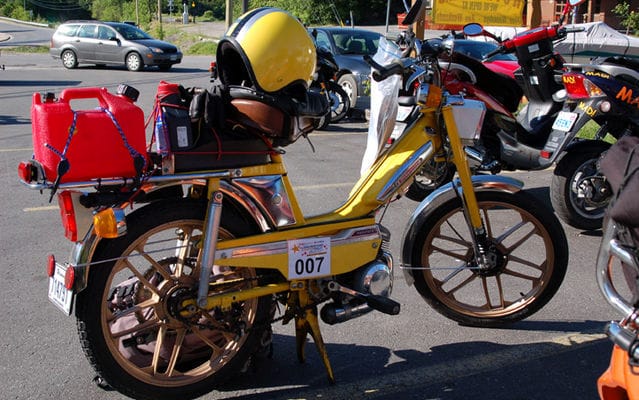 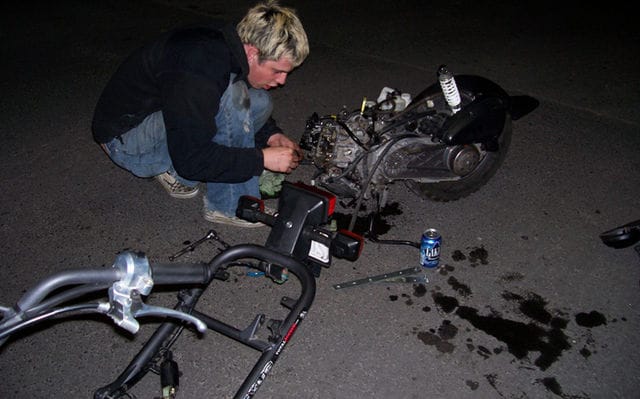 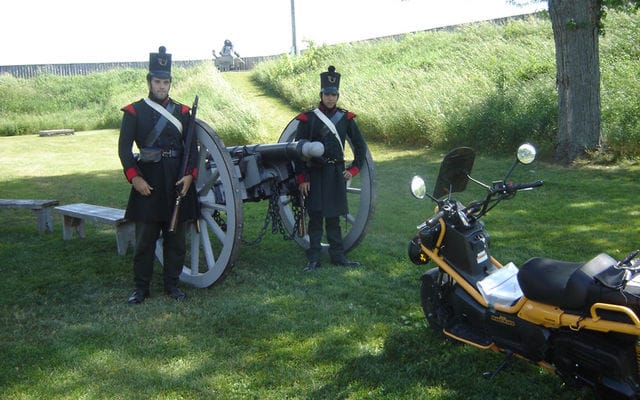 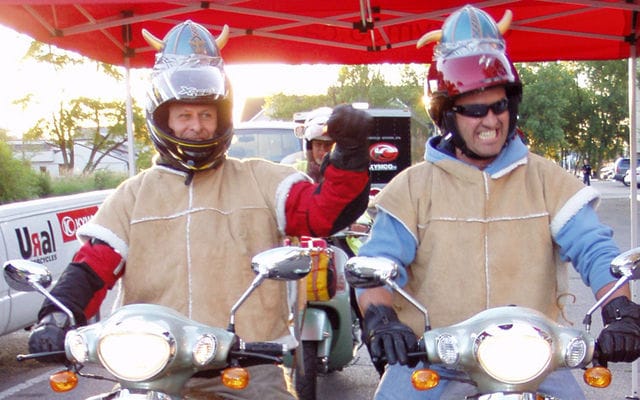 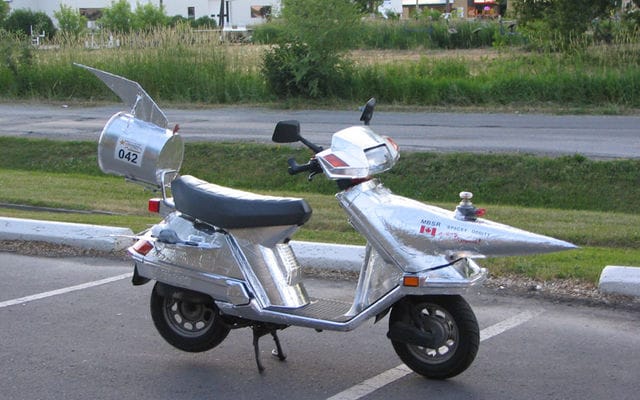 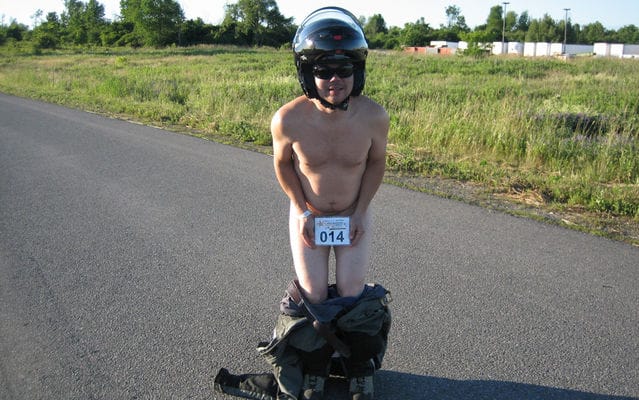 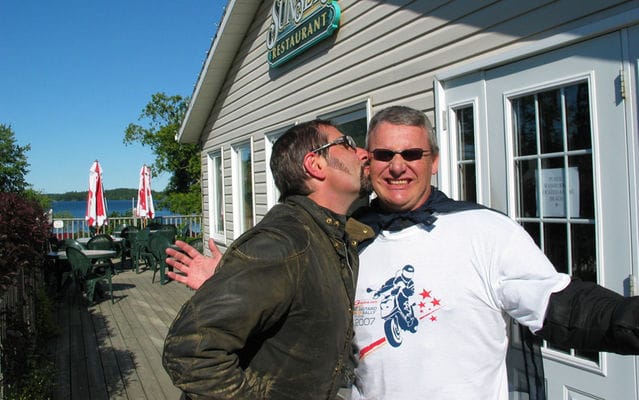 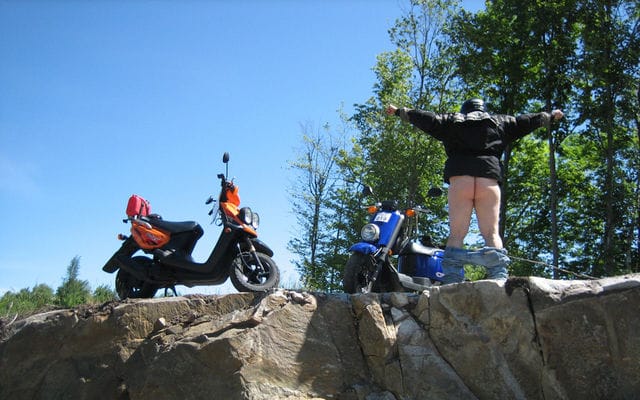 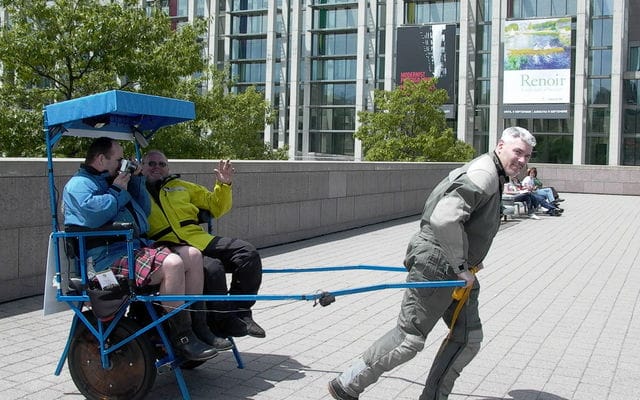 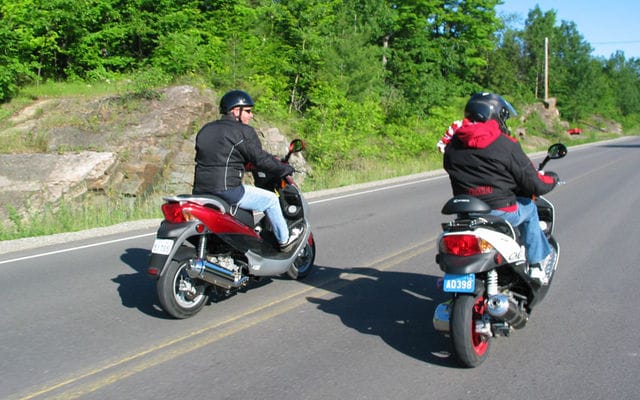 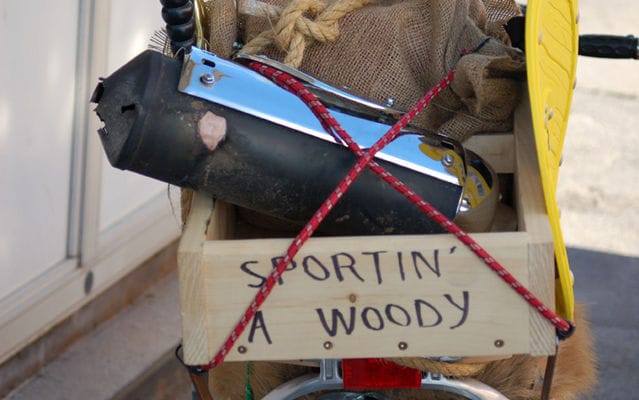 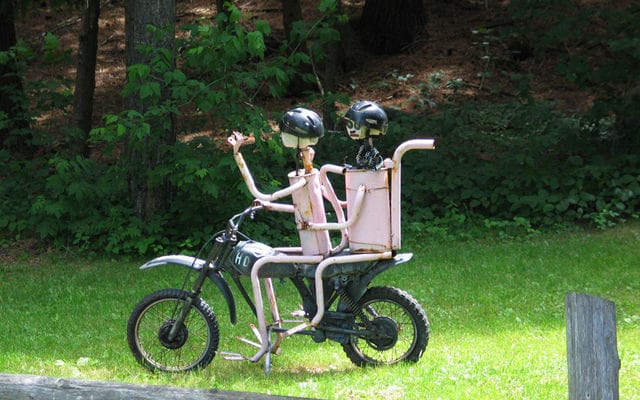 Riding through Prince Edward County’s scenic country backroads on a crisp, clear June morning was an enlightening experience. I’d ridden through here a few times before, yet by having zipped through the area I had failed to notice the beauty of the surrounding countryside. But by putting along at a sedate 40 km/h I was able to absorb the serene, Zen-like silence, the feeling of calm enhanced by the dawning sun and scenery draped in morning mist.

The reverie ended when a dog, materialising from nowhere, in full chase, startled me. And I couldn’t even outrun the four-legged bugger. The throttle was pinned, yet the flea-ridden fiend was gaining on me. My saving grace was the lack of power of my 1970 Motobecane 50V moped. The malicious mongrel, probably used to chasing cars and motorcycles that usually slow down and then speed away as it gives chase, picked up speed and unexpectedly ran into my slow-moving yellow steed, belting out a yelp in surprise and then running away. I looked back to confirm it was unhurt and laughed once my heart stopped racing. Fortunately, it was the only encounter I had with an animal (aside from the not-quite-flat roadkill racoon, which when considering my speed, I should have missed) during my 660-kilometre trek as a competitor in the 2007 Mad Bastard scooter rally.

The Mad Bastard rally is the brainchild of Rob Harris, editor of Canadian Motorcycle Guide Online (cmgonline.com), and is an event like no other. It is not a race, but rather a challenging endurance rally primarily for scooters, in which riders must complete the given route within the allotted time while gathering “mad” points. Mad points are also awarded for type of machine and its age: the smaller the displacement and the older the bike, the more points you begin with. I’m at an advantage with my 37-year-old, 49 cc moped—and I’m allocated a few extra points for the pedals. Riders also collect points at several checkpoints, where specific information is requested in a kind of scavenger hunt.

There are four classes: Day Release for scooters 200 cc or greater; Therapy Required for scooters between 100 and 199 cc, Heavily Medicated for 50 to 99 cc machines, and the class I enter, Straight Jacket, for machines 49 cc or less.

The allotted time you have depends on the class, ranging from 15 hours for Day Release riders to 24 hours for the Straight Jackets. Creative attire also counts for points, Blaine McKibbin scoring high for this, disguising his Honda CH80 Mascot to look like a spaceship. One rider comes as Elvis, Cycle Canada’s Andrea Goodman sports a ballerina’s tutu, and there are a couple of Vikings. You must also prove your madness by documenting, in pictures, various acts of political incorrectness.

An arrest, however, meant automatic disqualification. Thirteen tasks were required this year, one of which was to get a picture of yourself kissing wait staff working at the Sunrise restaurant in Sharbot Lake, where one enterprising young lady quickly caught onto our antics and began charging five dollars a kiss.

The rally winner would be awarded a new Vitality 50 scooter supplied by Kymco, who also fielded a full factory effort, showing up with 17 machines and competing in three classes. Walter Heilman, president of Beco Motor International, importers of Kymco products, as well as a few members of his family, took part in the rally, though they weren’t interested in winning the prize scooter he provided.

Heilman, who constantly recounted jokes that can’t be repeated here, poked fun at my moped and offered to lend me a Kymco scooter, assuring me I had a better chance of winning. My primary goal wasn’t to win the scooter, no matter how much of an improvement it was over my vintage ride. I just wanted to finish—on my 50V. When I attempted the rally in ’05 I had to quit after just 50 kilometres due to mechanical failure.

Fifty-five teams from Canada and the US lined up for the start at 4:00 am on Saturday. Our route avoided freeways to accommodate small-displacement machines and took us through the most scenic parts of eastern Ontario, heading southeast from Belleville through Prince Edward County, northeast through Frontenac, Lanark and Renfrew counties to Ottawa, south to Morrisburg, and then west back to Belleville. Once there, riders had the option of doing a 140-kilometre bonus loop to Cobourg and back for extra points.

My strategy was simple: I planned on making a minimal number of stops along the route by carrying an extra gallon of premix and plenty of snacks in my backpack. Despite a pace so slow that at times it would have been faster to run beside my moped (on two occasions I supplemented engine power by pedalling uphill), my strategy worked well for the first third of the rally route, which included several checkpoints. My well orchestrated stops allowed me to leave the checkpoints ahead of the faster teams, but with my two-horsepower two-stroke good for only 50 km/h on level pavement without wind, I was getting blown away by Honda Ruckuses, Yamaha BWs—and everything else. I kept pace with the top runners until the long, straight stretches before Ottawa, where the distance between me and my adversaries became too great to recover.

Frosty early-morning temperatures turned balmy mid-afternoon, and as I stripped layers of clothing from my body, so was my moped stripped of power. Heading out of Ottawa towards Winchester I barely topped 40 km/h, and making things more difficult were spark plugs that regularly quit (I was down my last two unused spark plugs), as well as a sticking variator. I had greased the Motobecane’s variable drive pulley, but didn’t use heat-resistant grease (I found this out after disassembling the variator once home), and the constant high-speed operation (by moped standards) eventually turned the grease into a hard, glazed substance resembling hardened fibreglass resin. My ’ped refused to transfer into a lower ratio when slowing down, making starting from a stop nearly impossible without pedalling like a mad bastard. I soon adopted a non-stop riding style, slowing well before traffic lights and stop signs, while maintaining enough momentum to drift through without stopping.

I hit Kingston at twilight and stopped for gas and a quick meal. Upon leaving I encountered my biggest obstacle: darkness. I had meticulously prepared my moped for the rally by refreshing the engine, checking wheel bearings and adding auxiliary total-loss lighting, as the engine lacks a charging system. I strapped a 12-volt battery to the side of the moped and had installed two household 10-watt halogen lamps, which in a totally dark garage provided what seemed like more than adequate lighting. On a dark road, however, looking through tired, bloodshot eyes at the pale-yellow patch of light barely illuminating the pavement ahead of me was like looking at candlelight through welding goggles. Add to that the blinding glare of oncoming cars and I could only guess where to point my moped.

Straining to see the road those last few hours to the finish drained me more than the rest of the day had, pedalling included. I arrived at the finish just before midnight, 19 hours after my departure. I was told by one of the scorekeepers that if I took off immediately for the bonus loop to Cobourg, I had a chance at winning. One glaring look at him with my crimson-burning eyes prompted the retraction: “Oh—never mind.”

Of the 55 teams that made the start, 43 finished. Team Wheel Easy was vindicated for the scooter lost before the start by winning a new Kymco. The Go-Go boys, who, despite reassembling their Ruckus only minutes before the start, took second, while I managed a respectable 14th in a field dominated by faster, newer machines—and madder bastards.

I’ve since suggested to Harris that he include a new class for home-built machines—a class for the maddest bastards of all. Besides, I must find something to do with this bicycle engine I bought.