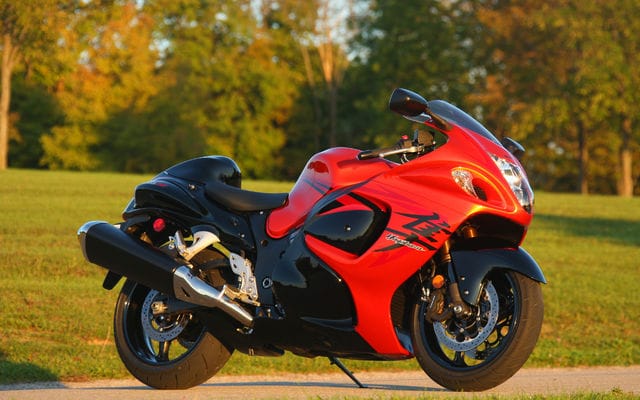 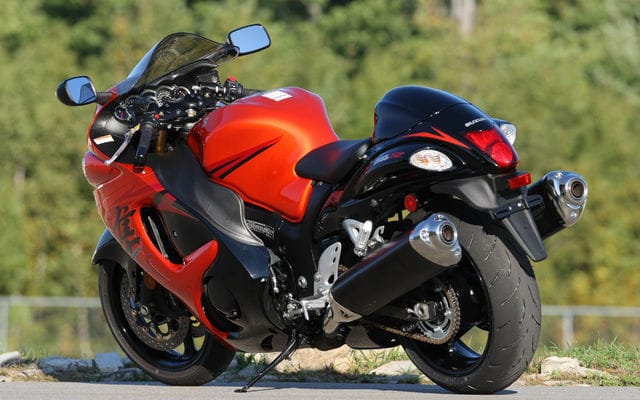 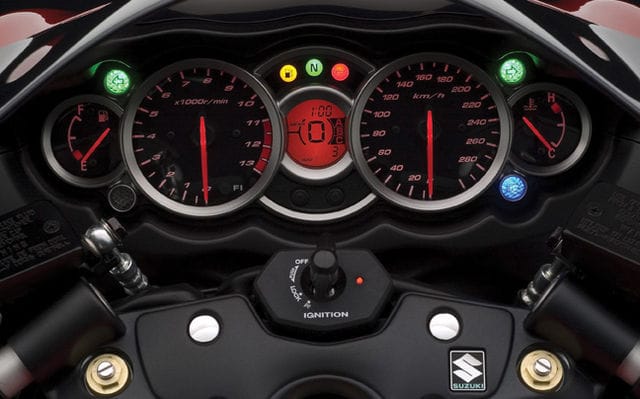 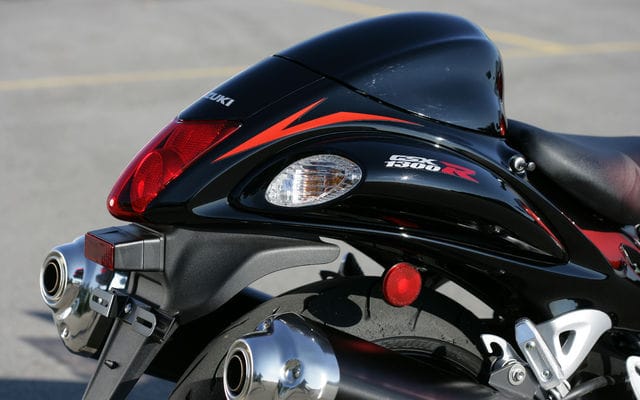 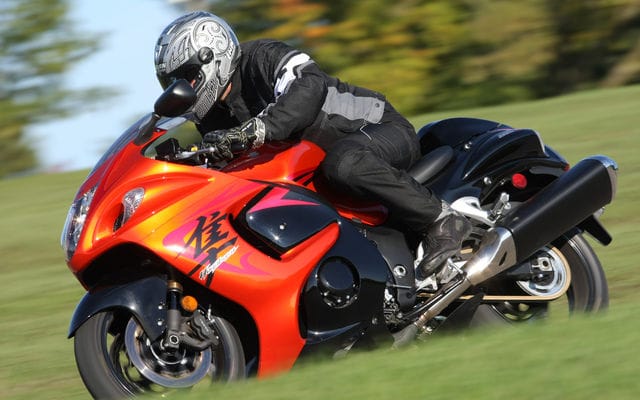 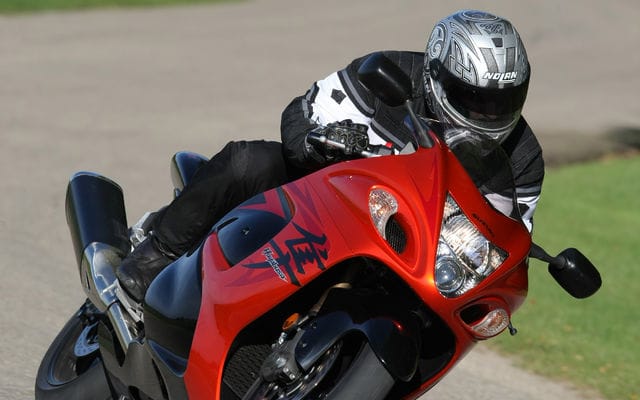 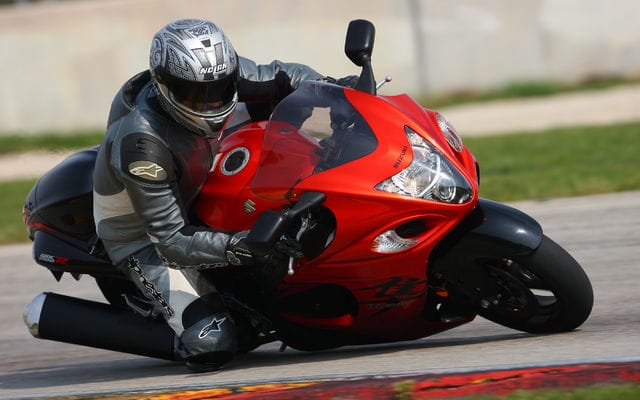 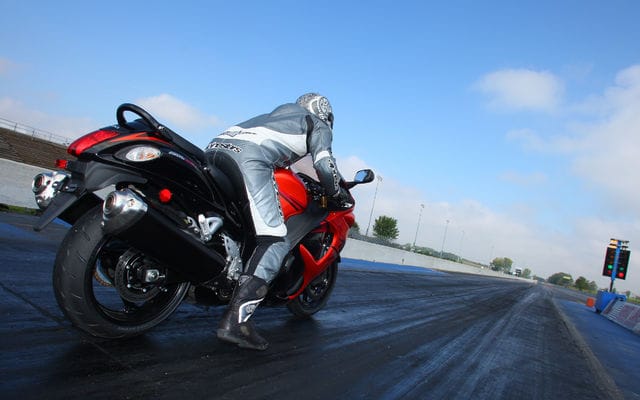 In Chicago, Miami, Los Angeles and other major US cities, custom bikes cast a different shadow than the raked-out, monkey-grip chopper silhouette. Over the years, the Hayabusa has gained the “street cred” to form the foundation of these slammed inner-city cruisers, which is why Suzuki kept the bike’s styling intact when it redesigned the machine for 2008.

Although most would describe the laid-back and raked-out cruiser as the quintessential American motorcycle, there is a growing custom-bike trend down south that parallels the tuner-car phenomenon. Stretched swingarms, exaggerated bodywork, dropped suspensions and strategically placed neon lights highlight a creative explosion springing up all over the US, mostly concentrating in large urban centres. These stretched-out-the-rear artistic statements are the sportier equivalents of the boutique chopper, with lots more power, though almost equally handicapped in terms of handling.

Wheelbases are lengthened for a dragster look, and nitrous oxide, superchargers or turbos are added to back the radical look with horsepower numbers that make MotoGP bikes seem tame in comparison. And by far the most popular bike used for these transformations is the Suzuki Hayabusa.

Introduced to some scepticism, many called the original Hayabusa ugly. According to Suzuki, the Hayabusa’s bodywork was designed primarily to cheat the wind at high speeds—it was, after all, the fastest production motorcycle when introduced (CC recorded 190.5 mph/306.6 km/h at the Transport Canada speed oval in 2000), and it is the machine responsible for a gentlemen’s agreement between manufacturers that caps top speed at 186 mph (299 km/h). Dictated more by the wind tunnel than by stylists, its shape boasted the highest aerodynamic efficiency in its class, a claim that prompted Cycle Canada to take a Hayabusa and a Kawasaki ZX-12R for a head-on wind-tunnel comparison at the National Research Council (CC, Sept/Oct 2000). It proved its aerodynamic superiority by having lower aerodynamic drag than the ZX-12R, and even bettered a GSX-R750 and Bandit 600 brought for comparison.

Since its introduction, the Hayabusa has achieved cult status, and a solid following of ’Busa believers has grown over the years, attracted both by its performance and by its bulbous bodywork. Hayabusa chief designer Kodi Yioshiura, who also designed the Bandit 400, the SV650S and the TL1000R, travelled to the US prior to the 2008 redesign, visiting local L.A. biker hangouts, meeting with owners, stunters and street racers and taking notes on what local custom bike builders were doing to his creation. Despite heavy modifications, one thing remained constant: the bikes retained their original shape, even if they were stretched or chopped. Suzuki didn’t want to mess with the bike’s success in the US (where about 10,000 units are sold each year), and despite early speculation of an entirely redesigned Hayabusa engineers remained faithful to its original design. During the technical presentation at the press launch in Chicago, chief engineer Hiroshi Iio jokingly apologized for having introduced a new Hayabusa.

Despite its familiar outline, this is an entirely new machine. Engine output was the first item on the list of improvements and claimed horsepower is up to an unbelievable 194 from 173. Ram-air induction adds approximately 5 per cent more power at high speed—you can do the math on that one. Peak torque is also increased to 114 lb-ft from 102. This added power comes from several internal engine changes, starting with a 2 mm increase in stroke (now 65 mm), which bumps displacement to 1,340 cc, and a notable increase in compression ratio, now at 12.5:1 from 11:1. Valve diameters remain unchanged at 33 mm intake and 27.5 mm exhaust, though material is now titanium. Intake valve lift is increased by .4 mm and exhaust lift by 1.1 mm, and a new hydraulic cam chain tensioner maintains more precise valve timing and is quieter.

Engine management is revised, and larger 44 mm throttle bodies (previously 42 mm) now incorporate electronically controlled secondary throttle valves and secondary fuel injectors. This new electronic control (which includes three selectable powerbands via the handlebar-mounted S-DMS button) provides much smoother power delivery than the previous model. The abrupt throttle response that caused the older ’Busa to lurch forward when hitting bumps at low speed is gone. Low to midrange power is still more forceful than on the Kawasaki ZX-14, and acceleration is hard enough from 5,000 rpm to make you light headed—by the time the engine spins past 8,000 rpm all around you blurs.

On the first day of the press launch we are allowed two quarter-mile passes at the Great Lakes Dragaway, just south of Milwaukee, Wisconsin. Without practice I have difficulty launching the bike hard and keeping the front wheel on the ground, and despite being rather rusty (the last time I blasted down a quarter mile was during the introduction of the Screamin’ Eagle Destroyer in December, 2005), I manage two mid-10 second runs, the fastest a 10.54 at 139 mph. AMA Superbike racer Aaron Yates of the Jordan Suzuki team is on hand, and after several runs he manages a 9.91-second quarter-mile, a more accurate indication of the machine’s power.

From the drag strip, we take a 140-kilometre ride north to Elkhart Lake, where   we’re to ride the bikes the following day at the Road America racecourse. Ergonomics are unchanged from the previous model, and the machine still has a wide midsection. The riding position is less strenuous than a pure supersport machine, but a couple of hours into the ride (we abide by the speed limits, the fast stuff comes tomorrow) and I’m ready for a break to relieve my arms. Engine vibration is subdued, reduced to a mild, non-intrusive buzzing at the handlebar at about 6,000 rpm.

Along the way, I get a glimpse of the type of rider Suzuki is targeting, at least in the US. Host of Speed Channel’s Super Bikes!, Jason Britton, riding just ahead of me, pops stand-up wheelies and holds them for hundreds of metres. He really catches my attention, however, when he repeatedly locks the front brake while holding the throttle open at 120 km/h, smoking the front tire and leaving black strips on the pavement hundreds of feet long.  He continues his antics at the racetrack the next day, riding the bike while seated backwards, standing beside and behind the machine at speed, and doing brake-stands, rolling burn-outs and wheelies. His crew are taping an episode of the show, while Suzuki executives look on with awe and concern. It’s the first time I’ve attended a press launch where journalists perform such stunts, though the concerned execs may have asked that the wildest footage not being shown, because when the program is later broadcast, the risky manoeuvres are gone.

Road America is the ideal Hayabusa testing ground, as its long straights allow us to really appreciate the machine’s power and top speed is reached twice a lap. And I do not recommend that anyone attempt to test the machine’s top speed on the street, as it easily pegs its speedometer in the fifth of its six gears. Overall gearing is slightly shorter than before (2.39:1 versus 2.35:1), but this is mostly to reduce drive chain noise. The bike won’t go any faster in top gear, as it is speed limited, though the US-spec speedometer optimistically reads more than 190 mph at the track. It is exhilarating to see the speedometer needle point to your right hand, but it’s not something I’d like to experience on the street.

Exaggerated speeds allow me to sample the machine’s excellent stability and improved aerodynamics. The fairing is reshaped and slightly wider, with smoother joints between panels. The windscreen is 15 mm taller and the top of the fuel tank is lower, allowing a tighter tuck, and a turbulence-free airflow slips past my crouching body and over a droopy new tailpiece that looks like it could substitute for a fairing on a smaller bike. There is no helmet buffeting or leather flapping, an indication that wind tunnel testing wasn’t wasted. A new instrument panel features large, easy-to-read analogue gauges, but its interlocking-circle design somehow looks too symmetrical for my taste.

Although not the ideal track-day tool (well, a more fitting track environment for the Hayabusa is the drag strip), the super-fast Suzuki handles relatively well on a twisty racetrack. A slightly lighter frame uses a rectangular steel tube subframe with seat rails 12 mm lower for reduced passenger seat height. The rectangular-section swingarm now has an internal rib that increases rigidity, and the fully adjustable suspension is firmer front and rear. Steering geometry is a touch quicker with rake reduced to 23.4 degrees from 24 and 4 mm less trail at 93 mm. The Hayabusa certainly feels bulkier than a GSX-R1000 (as it should, at 220 kg/485 lb it’s carrying an additional 48 kg/106 lb) and tight turning transitions require a fair amount of muscle, but it can be ridden quickly if you don’t trail-brake deeply into turns and keep the pace at eight-tenths or less. Push above that and the bike gets out of shape going into turns at speed, its significant weight overwhelming both tires and suspension. At full lean the Bridgestone BT015 radials strain for grip, drifting—though not alarmingly—through faster turns. Cornering clearance is plentiful for street riding, though footpeg feelers touch regularly at the track, causing technicians to replace them after each track session. A transversely mounted non-adjustable steering damper located just above and ahead of the lower tripleclamp enhances stability without taxing low-speed manoeuvrability too much.

Braking is improved with two four-piston radial-mount Tokico calipers squeezing smaller-diameter (310 mm vs 320 mm) but thicker (5.5 mm) discs. At the rear are a larger diameter and thicker disc (260 x 5.5 mm vs 240 x 5 mm) and single-piston caliper. Power is very strong despite soft lever action and a slipper clutch is added to smooth braking. Repeatedly slowing from maximum speed into second and third-gear turns overheats the brakes, causing them to fade markedly after three laps, and bringing the brake lever close to the handlebar. I adjust the front brake lever so it’s the farthest from the handlebar, thus preventing further finger squashing. Despite the overheated binders, braking power is maintained for the duration of the riding sessions and lever feel returns immediately once cooled. Road America’s long straights and tight turns are conducive to overworking stock brakes; this won’t happen during aggressive street riding.

The stunt counterculture hasn’t yet caught on in Canada—at least not with the fervour it’s experiencing down south—and I think most Canadian Hayabusa riders are more interested in the bike’s real-world virtues, rather than its capacity to balance on its rear wheel or travel at supersonic speeds. However you choose to ride it, at $15,099 it’s a cult machine that deserves more than just a cult following.