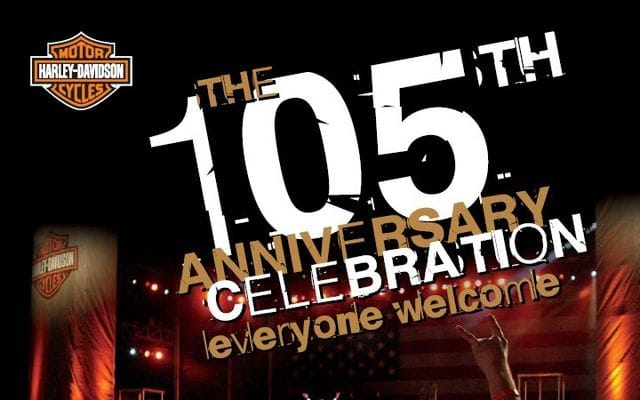 Harley-Davidson Canada has released details of their 105th Anniversary celebration, which includes 5 separate national rides converging on Milwaukee, Wisconsin in time for the main party taking place from August 28th to 31st. H-D is estimating that 450,000 enthusiasts will be on hand to take part in the festivities in Milwaukee.

The national ride in Canada, sentimentally dubbed The Ride Home, will commence on August 20 with major starting points in Vancouver, Edmonton, Halifax and Quebec City. The route will make stops at various H-D dealers along the way to participate in local celebrations and special events.

Along with the national rides, major celebrations are also planned to be held in Montreal, Toronto and Winnipeg. As with the Milwaukee party, they will feature concert performances, various activities, and the new 2009 H-D models. Tickets are $25.00 per person with a portion of the proceeds going to Muscular Dystrophy Canada.

The Montreal celebration, which will be held on August 23 at Parc Jarry, will be headlined by two-time platinum selling artists Marie-Chantal Toupin and guitarist Steve Hill.  Other entertainment will include the Pinup Saints, who apparently will perform unique sensual dance numbers.

In Toronto things kick off on August 24 when David Wilcox and rock group Rides Again take the stage at the historic Distillery District. In contrast to the sensual dancers that will perform in Montreal, Hog Town will get Liliana "Lil" Lovell, the originator of the Coyote Ugly Saloon and host of “The Ultimate Coyote Ugly Search”. She will be joined by the authentic Coyote Ugly girls and the winner of the TV series.

Canadian rock band April Wine will play at Cowboy’s Roadhouse on August 24 as part of the Winnipeg party. Joining them will be Inward Eye, an up-and-coming group formed by three Winnipeg brothers, and even more dancers, the Buck Wyld dance team.

Tickets for local celebrations and details on the national rides can be found on-line at: www.harleycanada.com/105th.