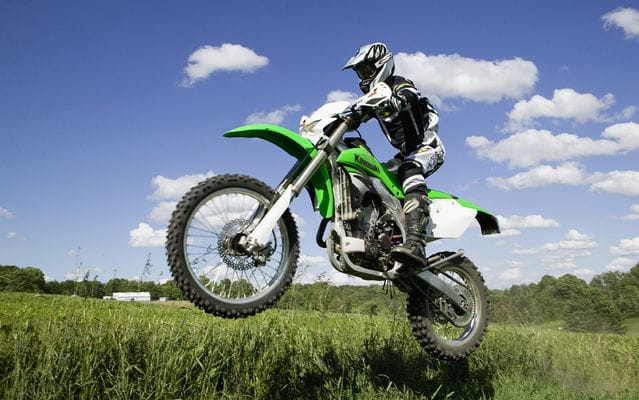 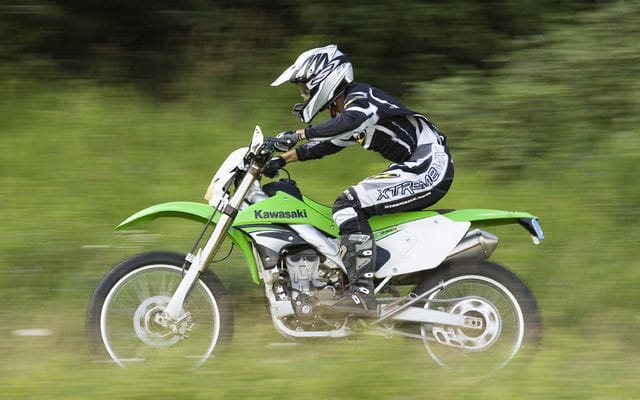 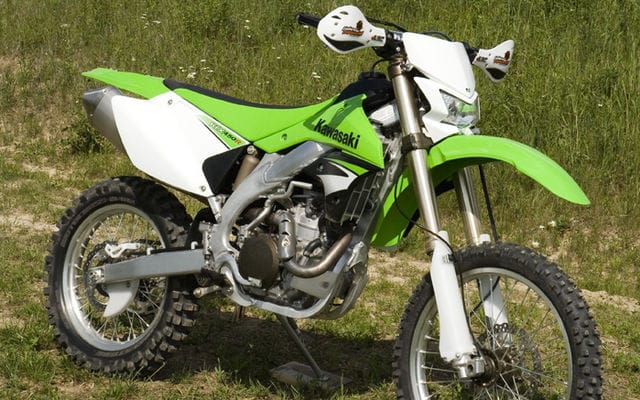 Kawasaki hasn’t offered an enduro machine since 2005, the last year that the popular and inexpensive KDX220R two-stroke, as well as the KLX300 and 400 four-strokes were available. For 2008, Kawasaki re-enters the segment with its most serious off-road model to date, the KLX450R.

Although the chassis and engine are shared with the KX450F motocrosser, the KLX is tuned for use on a wider range of terrain. Internals in the 96 x 62.1 mm (bore and stroke) 449 cc liquid-cooled, four-valve engine differ with revised camshaft profiles and 1 mm smaller diameter stainless exhaust valves (now at 30 mm) contributing to stronger low to midrange power than on the KX-F.

Exhaust valve material is changed for improved long-term reliability; the KX-F uses titanium exhaust valves, which have a shorter service life. Titanium intake valves are retained. Ignition mapping is revised, settings of the Keihin FCR 40 mm carburetor are altered and flywheels with twice the mass of those on the KX-F are used to further smooth power delivery.

The ignition system features separate maps for in-gear and in-neutral operation. When in gear, idle speed is increased to reduce engine braking, while a normal, lower idle is attained in neutral. Also, a soft rev limiter gradually tapers off power when approaching redline so as not to cut power abruptly and upset handling. A new exhaust system uses a large-volume muffler that incorporates an approved spark arrestor, while silencing the 450R’s bark to respectable levels.

Wider transmission ratios are more suited to off-road work—only third gear in the  five-speed gearbox is shared with the KX-F. Starting is simplified with the addition of an electric starter, while kick starting is retained if the battery goes flat. A side stand is also added, saving trailside trees the burden of supporting a parked machine.
The most remarkable characteristic of the 450R is its sewing-machine-smooth power delivery—the KLX carburets cleanly in a variety of conditions. The bike is a pleasure to ride whether at a sedate trail-ride pace or wide open in timed competition.

The KLX’s perimeter-style aluminum frame is coupled to an aluminum swing arm that features a cast alloy pivot area. The rigid chassis contributes to the 450R’s predictable handling, with chassis geometry differing slightly from the motocross version, with half a degree more rake at 27.7 degrees and 5 mm more trail at 122 mm, though these figures can probably be attributed to the use of a smaller diameter rear wheel (18-inch vs. 19-inch on the KX-F). The 18-inch rear wheel allows for a wider selection of off-road tires, including FIM-approved enduro tires. As is, the KLX is equipped with Bridgestone M401/402 knobbies in 80/100-21 and 110/100-18 sizes.

Sophisticated suspension components grace both ends of the Kawasaki; the Kayaba 48 mm inverted fork is adjustable for compression and rebound damping, and features cartridge-type damping units that keep the air and oil inside separated to reduce foaming of the oil. The front end has a high quality feel and the spring rates are well chosen for general trail riding. The KLX squats nicely into tight turns as the fork compresses under braking, providing confidence-inspiring feedback.

The Kayaba rear shock has high- and low-speed compression damping adjustments, 22 clicks of rebound damping adjustment and adjustable spring preload. Our KLX test bike was delivered with excessive rear spring sag but the bike worked reasonably well with this setup. Adding some rear preload quickens steering response slightly and improves turn-in. Suspension springing is on the soft side, stiffer springs front and rear are in order for the serious trail rider or racer.

Nissin brakes are shared by both Kawasaki 450s, and are nearly flawless, though the rear is sensitive and prone to stalling the engine under hard braking if the rider is slow to pull in the clutch lever. The front brake uses a two-piston caliper matched to 250 mm semi-floating disc, while the rear is a single-piston caliper with 240 mm disc.

The KLX is well equipped for off-road use with a 35-watt halogen headlight and LED taillight. Tucked in behind the front number plate is a compact digital speedometer, which will prove useful for enduro competition with two trip meters, an odometer and a clock, though the addition of a timer would make it more practical. A non-tapered Renthal aluminum handlebar is standard, as is a wider seat with textured cover. The battery, added to handle starting duties, is centrally located under the seat and behind the airbox. An added skid plate and protection on both sides of the engine (only available on the right side on the KX-F) keep engine cases intact when the going gets rocky.

With the extra features comes an added 10 kg over the KX-F, the KLX claiming 115 kg (254 lb) dry weight. The 8-litre fuel tank is only marginally larger than the KX-F’s (0.8 litre more), though it should carry enough fuel for all but the longer-distance off-road trips.

Kawasaki’s $8,999 KLX450R comes with a six-month warranty that can be extended an additional two years for $450 or three years for $560. It is surprisingly competent for a comeback effort into the genre, and it surely benefits from the extensive testing and development work performed on the KX450F, which enters its third year of production. The KLX has a loping, easy-to-ride feel that takes very little time to get used to, and is without any undue quirks or surprises. And when you’re riding deep into the woods that’s a reassuring feeling.