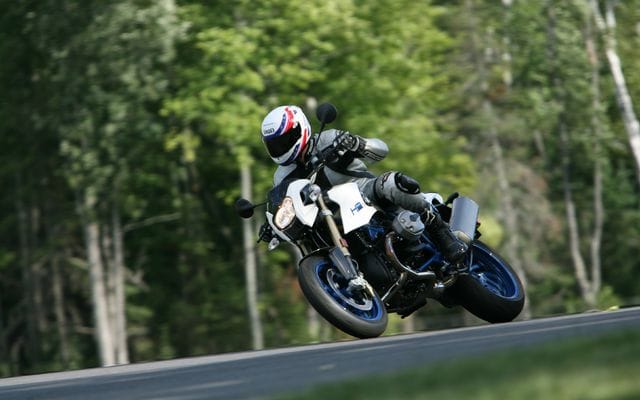 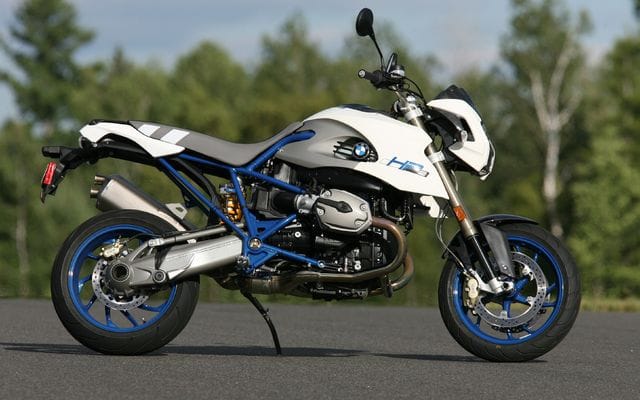 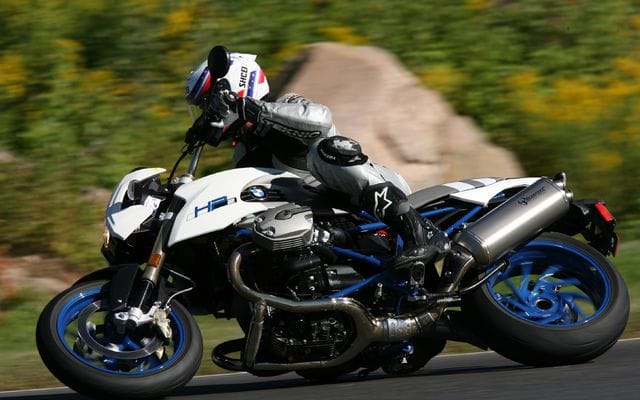 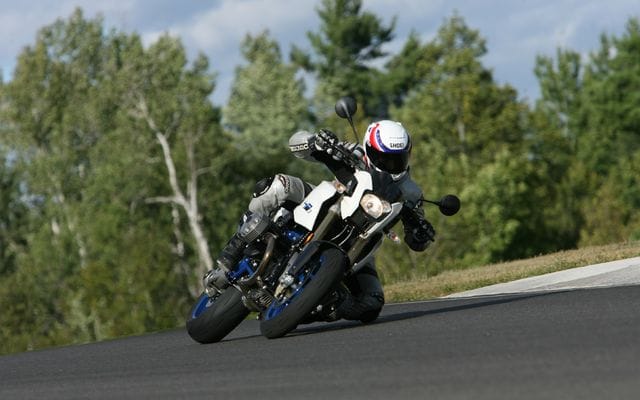 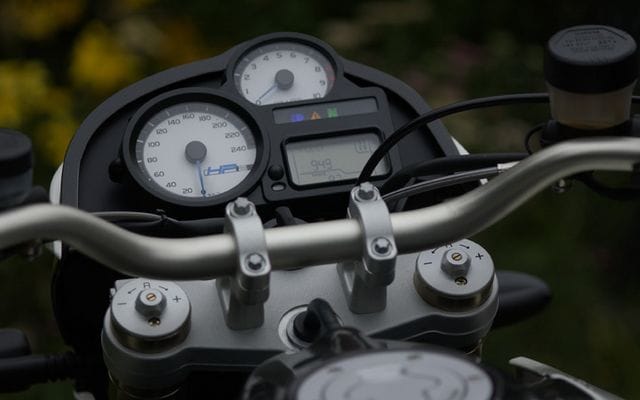 My vacation plans were simple: no travel, no computer, just relax at home and maybe spend some quality time refreshing the top end of my Honda CB900F. I was in the process of re-ringing one of its pistons in the garage when the phone rang. I was hoping that three stories of wood, drywall and carpeting above me would stifle the signal, but these modern cordless phones could probably pick up a conversation from the space shuttle.

Rob Dexter of BMW Motorrad Canada called, wondering if I’d be interested in testing a BMW HP2 Megamoto, the only one in Canada at the time. A tempting proposition indeed—swinging by the office and putting in a few hours couldn’t hurt; I could get back to relaxing later. The office in this case is Calabogie Motorports Park, where a Pro 6 Cycle (pro6cycle.com) track day is scheduled just one week after I pick up the HP2 Megamoto.

BMW’s HP2 models are highly specialized, limited production hand-built machines, and as such, we feel it necessary to test them in an appropriate setting. We tested the original HP2 Enduro during an off-road trek into Quebecois wilderness (CC, Nov/Dec 2006), so a jaunt at one of Canada’s most technically challenging circuits seems right for the asphalt-only Megamoto.

Although touted as a supermoto in BMW’s literature, the Megamoto is strictly a street-oriented sporting motorcycle, much like the firm’s sportiest street twin, the R1200S. Differences between the Megamoto and the R1200S are significant, however. The HP2 isn’t based on an existing street platform and shares only the 103 mm x 73 mm Boxer engine with the S, albeit in an altered state of tune. The HP2 engine is devoid of counterbalancers and has lightened flywheels, and although the HP2’s claimed peak power is down on the S, with 113 hp at 7,500 rpm (122 hp at 8,250 for the S), maximum torque is up 2 lb-ft at 85, and it peaks 800 rpm sooner at 6,000 rpm. Enhancing the performance potential of the HP2 is its claimed dry weigh of 179 kg (395 lb), 11 kg less than the S.

Power output is typical of a Boxer—broad and flat—but the engine pulls with remarkable authority, making the bike deceptively fast. I saw an indicated 240 km/h on Calabogie’s back straight as the bike was nearing redline in top gear. The engine revs quicker than a regular Boxer, yet vibration isn’t intrusive, despite the lack of engine balancers; there’s just a constant buzzing that changes frequency as the engine revs.

Sound from the stock Akrapovic exhaust is mellow and throaty in tone, and many pit-side observers comment favourably on the Megamoto’s sound as it bellows down the front straight. Throttle response is a bit choppy at lower rpm, and care is needed when modulating the throttle through slower corners to maintain a smooth line.

Other major differences between the HP2 and the R1200S include a full tubular-steel trellis type frame derived from the BMW R900RR Dakar rally racer, as opposed to the front and rear aluminum subframes on the S. It also does away with the Telelever front end, using a 45 mm inverted Marzocchi fork adjustable for compression and rebound damping. Although the Megamoto is based on the HP2 Enduro model, an Ohlins rear shock replaces the Enduro’s air damper, which lowers seat height to a more manageable yet still vertiginous 890 mm (35 in.), down from the Enduro’s 920 mm (36.2 in.) perch.

Seat height can be lowered still, as the rear shock is adjustable for ride height, aside from the regular preload and damping adjustments. I lower the bike 35 mm in the rear, which takes about 10 minutes using a couple of wrenches, and lower the front an equal amount by sliding the forks tubes in the tripleclamps. This allows me to place both feet flat on the ground, while lowering the centre of gravity for more nimble steering transitions on the street.

Sitting on this machine is reminiscent of early 1980s superbikes: bolt upright and in the wind. There’s lots of legroom, an easy-to-reach handlebar and a firm seat that offers good short-term comfort, yet is not as torturous as the seats on some KTM models on extended rides. Seat time is limited, anyway, by a handicapped fuel range. A 13-litre fuel tank is good for about 160 km before the fuel light says it’s time to stop.

Steering is light, neutral, and quick, especially considering that chassis geometry is on the relaxed side with 28.6 degrees of rake and 95 mm of trail. Wheelbase is a lengthy 1,615 mm (63.6 in.). Stability at speed is slightly hampered by the ample leverage from the wide, tapered aluminum handlebar and the firm suspension, which offers excellent control on smooth surfaces, like at a racetrack, but jostles the rider about on bumpy roads even with compression damping set to minimum front and rear.

At the track, the first thing that grabs my attention is the attention others are paying to the Megamoto. Exclusivity aside (remember, for the moment, it’s the only one around), it is a very attractive motorcycle with simplistic styling that gives it a distinctly European and exotic flair. On the track, I quickly discover that I must raise the suspension, as the pavement immediately begins whittling away at the footpegs and brake pedal. Even raised, I continue to pay attention to lean angle, though contact is now less frequent. Cylinder heads never touch, though photographer Cory Klinkenberg later tells me they’re very close to contact. The stock Michelin Pilot Power radials provide secure footing for track riding, though I suspect the added grip available if they’re replaced with DOT racing rubber will lead to ground valve covers.

The telescopic fork offers much better front-end feel than the Telelever fork, while providing a measure of nosedive during trail braking that tightens steering on corner entry, a handling benefit Telelever-equipped BMWs aren’t afforded. Moving about on the machine to transfer weight is very easy, especially when sliding fore and aft, thanks to the well-shaped seat. Turning transitions are smooth, but with the ride height adjustment at its maximum and the forks in their original position, it’s a long way up and then down again to full lean. Stability at the racetrack is exemplary, as there are no bumps to unsettle the chassis.

Overall gearing feels shorter than on a typical Boxer, and the transmission’s six speeds are relatively close in ratio. Shift lever throw is very short, but feel at the lever is vague, and with road race boots on it’s difficult to feel gear changes. I must sometimes maintain pressure on the lever, or give it a second prod to make sure a gear change is initiated.

As I’d mentioned earlier, this machine is deceptively fast on a racetrack, and in capable hands it can lap quicker than a true supersport. Braking performance is up to the task, as twin 320 mm front discs and Brembo four-piston pots offer supersport braking power, with surprisingly strong initial bite and easy modulation. The brakes remain fade-free for the entire 20-minute sessions at Calabogie, a track that is demanding on brakes.

I’m having such a good time riding the BMW HP2 Megamoto at Calabogie that I decide to put in some overtime and stay a second day. As much fun as it is to ride at the track, on the street the Megamoto is a highly compromised machine, its overly firm suspension and limited fuel range making it the antithesis of what a BMW-phile expects in a bike. But the $22,250 Megamoto isn’t meant for the typical BMW rider, and if its performance and styling were motivation enough for me to cut my highly valued vacation time short, I’m sure others will be wooed into ownership.