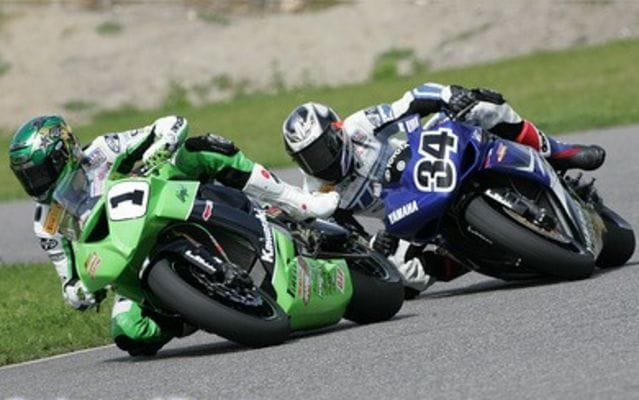 Green Meanie beats up the competition at Calabogie

Racing a Canadian Kawasaki Motors ZX-10R, he was third after the opening lap, but moved into second on the 2nd lap before finally taking the lead for the remainder of the race on lap 12.

Szoke finished the race over 5 seconds ahead of the Yamaha YZF-R1 of Kevin Lacombe and 3rd place Steve Crevier on a Buell 1125R.

“I’ve got to work on my starts,” said Szoke, who started from second on the grid. “I really wanted to get off the line cleanly. But I thought as long as I got off in the top three I could hang in there.”

Szoke, a 29 year-old from Brantford, Ontario, is vying for his fifth national Superbike title. Today’s win was his 24th career Canadian Superbike Championship victory, placing him within two wins of Steve Crevier for the all-time lead.

Crevier, who had qualified eighth on his Buell, spent most of the race battling with the Suzuki GSX-R1000 of Francis Martin. The pair were running 7th and 8th when a number of the leaders crashed, giving them an opportunity to move up the order.

Despite a horsepower disadvantage, the twin-cylinder Buell passed the Suzuki on lap 19 and held on to take third. “It’s quite amazing,” said Crevier, himself a six-time Canadian Superbike champion. “We only got the bikes last Friday, and the crew has been slaving for a week. We even had to use a DOT rear tire because our rim was too narrow for the slick. It got a little mushy at the end but it felt OK.”

Szoke takes a seven point lead over Lacombe into the second round of the Parts Canada Superbike Championship at Calgary’s Race City Motorsport Park on June 27-29.

Those disappointed by the Speed Channel’s delayed coverage of Moto GP racing will have this to consider: TSN will be televising this weekend’s racing on Tuesday, Sept. 9 from 1:00-2:00 p.m. EST.