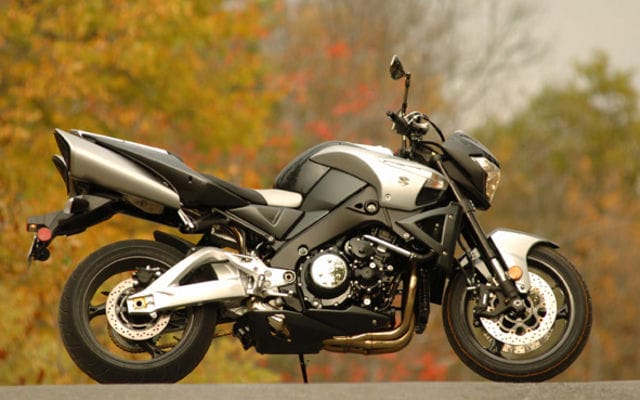 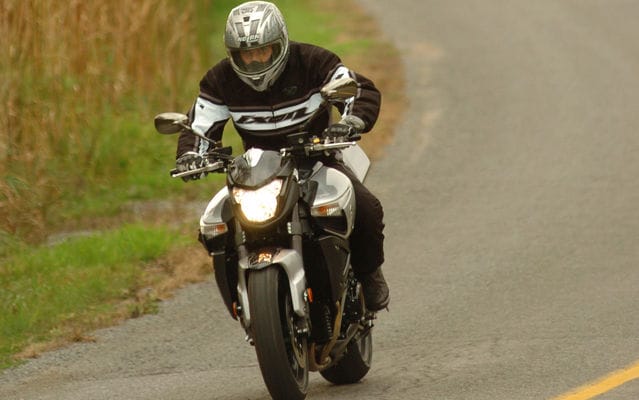 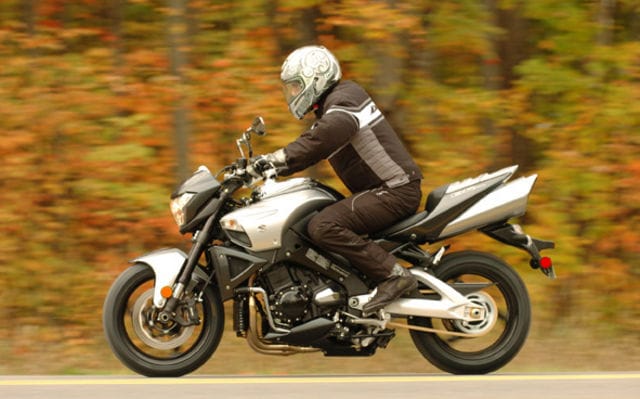 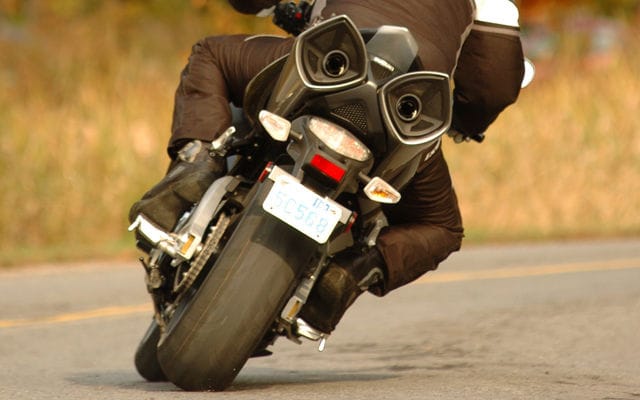 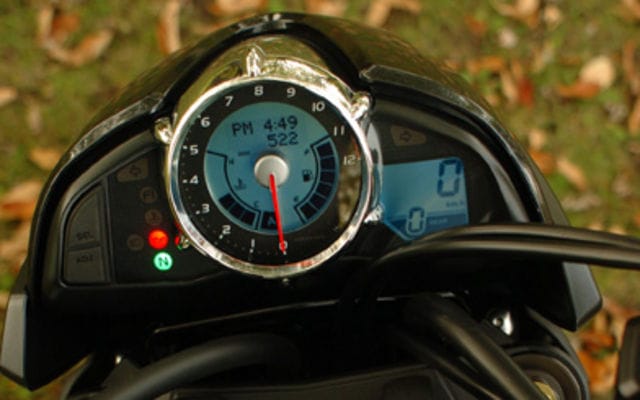 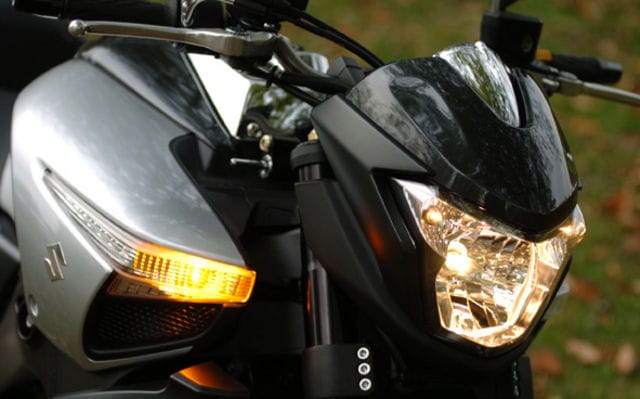 B-King for a Day

Seven years after the prototype’s debut at the Tokyo Motor Show, the B-King has finally arrived. Suzuki shelved the supercharger (it was originally called the Boost King) and has made a surprisingly civilized, if unconventionally styled, roadster.

Even Gene Roddenberry couldn’t have imagined a more outlandish scenario: a group of youngsters surrounding a futuristic-looking two-wheeler aiming hand-held communication devices that click away, capturing electronic images of the machine and storing them in hard drives with more memory than NASA’s early navigational computers.

When it was first introduced at the Tokyo show the B-King was a hit. Its protruding fuel tank panels concealed a supercharger, and part of its appeal was the promise of an outrageous power output, estimates putting it at 240 hp.

Subdued for mass consumption, the blower was sidelined (the faux air-intake grilles in the tank pods are retained), though the B-King’s 1,340 cc inline four is lifted directly from Suzuki’s most powerful machine to date, the 2008 Hayabusa.

The engine is identical internally to the Hayabusa’s, with a bore and stroke of 81 x 65 mm and a compression ratio of 12.5:1. Valves are titanium and share the same 33 mm intake and 27.5 mm exhaust diameters, as well as identical cam timing and valve lift. Differences in the intake and exhaust systems and altered fuel management mapping allow the B-King to claim 181 hp, a touch lower than the ’Busa’s 194, and claimed torque is a massive 108 lb-ft.

It seems as if engineers have programmed a powerband that mimics the characteristics of a supercharged engine, because power off idle and through the midrange is easily controllable and smooth, but as the tachometer needle sweeps past  8,000 rpm, the B-King begins pulling with arm-stretching force.

Twisting the throttle aggressively from 2,000 rpm results in a progressive buildup of power, with a surge in acceleration at 6,000 rpm that turns into a downright charge to the 10,500 rpm redline.

Shifting through the six transmission ratios is directly associated with how much of a rush the rider wants to experience. Roll on the gas in top gear at highway speeds for spirited passing acceleration; drop a couple of cogs and twist the throttle to its stop and you’d better have a good grip on the handlebar.

A lack of vibration makes the B-King feel almost electric smooth. Engine counterbalancing reduces vibration to a very mild buzzing, felt through the rubber-mounted tubular-steel handlebar and comfortably placed foot pegs. In typical naked bike fashion, the riding position is neutral, with plenty of legroom, while the wide and flat seat is firm and provides good long-distance comfort.

And long-distance comfort is important, because with a modest fuel consumption rate of 5.7L/100 km (50 mpg), the B-King is capable of stretching its 16.5-litre fuel capacity to about 290 km.

Seat height is the same as on the Hayabusa at 805 mm (31.7 in.), allowing riders approaching six feet tall to place both feet flat on the ground. The wide fuel tank pods push the knees far apart when seated forward while riding twisty roads at a sporting pace, though this doesn’t lead to any discomfort.

One item that requires extra attention when dismounting is the sidestand, which is placed precariously close to the shifter, and on more than one occasion the bike was inadvertently kicked into gear while the engine was running.

Instrumentation is simple and attractive, with a centrally mounted tachometer flanked on the left by warning lights and on the right by the digital speedometer. The tach incorporates an LCD display screen in its face. Information displayed on the screen is selectable via switches that are inconveniently mounted on the fuel tank console.

Aside from the usual dual trip meters (trip meter buttons are mounted on the instrument panel) and clock, an unusual selection of information is displayed on the screen, including a useful maintenance interval meter, and not so useful running time and average speed counters. A fuel economy computer would have been better appreciated than the latter two items.

Suzuki’s drive mode selector (S-DMS) is featured as part of the B-King package, but unlike the S-DMS on the GSX-R and Hayabusa models, the B-King’s only has two available power curves, and due to the centrally mounted selector buttons (on the fuel tank console), power modes can only be chosen when the machine is at a stop and in neutral.

Power is distinctly softer throughout the rev range in B mode, but once you get accustomed to the A mode’s full honk, you revert to B only when traction is limited by wet pavement.

Despite the machine’s girth, added weight (claimed dry weight of 235 kg/518 lb is 15 kg more than the fully faired ’Busa) and more relaxed chassis geometry (25.5 degree rake, 107 mm trail and 1,525 mm/60 in. wheelbase vs. 23.4 degrees, 93 mm and 1,480 mm/ 58.3 mm for the Hayabusa), the B-King feels lighter than the Hayabusa, mostly attributable to the leverage offered by the wide handlebar and the upright seating position that doesn’t put undue weight on the arms and wrists.

Steering at a walking pace feels slightly heavy due to the steering damper, which is mounted behind the top tripleclamp, though steering lightens considerably as speed increases. Unlike naked Buells or the Benelli TNTs, the B-King has a turning radius that allows straight-through U-turns.

Steering transitions require little effort, and the bike remains neutral at lean despite its wide 200 mm rear tire. Stability at speed is excellent and the machine exhibits none of the rider induced weaving that is common on naked bikes with wide handlebars.

Suspension at both ends is fully adjustable, and is firm yet compliant in operation, adding a refined feel to the rigid-feeling chassis. It keeps the bike composed over a wide range of paved surfaces, absorbing bumps without harshness; it’s not plush, but it’s not rock hard like European sport bikes either. Mid-turn bumps don’t toss the B-King about, nor does the rider get kicked off the seat when hitting potholes or frost heaves, though it’s still wise to avoid them.

At the far end of the 43 mm inverted fork are radial-mount four-piston calipers and 310 mm discs that provide excellent braking, with light lever effort, solid feel and effortless modulation. US and European models are available with optional ABS, something Canadian B-Kings must do without, at least for now.

Smoothing braking action is a slipper clutch. We never felt its effect on the street, though track-day attendees will certainly appreciate its benefits—and the B-King should prove quite competent on a racetrack, at least for those whose main objective is having fun, not competing.

Suzuki has a tradition of turning bold styling exercises into mass produced motorcycles, unlike other manufacturers, like Honda, that prefers minimizing risk by offering avant-garde designs like the Rune in limited production runs. Introducing a machine that departs drastically from mainstream design doesn’t always take, at least not immediately.

The original Katana of the early 1980s only increased in appeal years after it ceased production, becoming a collector’s item today, while the Hayabusa, which was initially met with skepticism, has attained cult status after nearly a decade in production.

It’s too early to tell if the B-King’s futuristic styling will be beneficial or detrimental to its success.

From the saddle
It was my misfortune that one of the first machines tested after Ontario’s new traffic law—where 50 km/h above the limit draws $10,000 fines and an immediate license suspension—was the B-King. Concentrating on staying below 150 km/h on the highway, I missed a bathroom stop and nearly ran out of fuel, as so effortlessly does it exceed limits that in the absence of mechanical strain, the speedometer is the only way to gauge speed. I had anticipated a frisky hooligan but the B-King, despite its street fighter mixed with ’60s Impala styling, is all about sophistication. And that’s the oddity of this machine, because I had expected a naked Hayabusa to be a more visceral machine, instead it’s a supplely sprung standard with immense power delivered in a muted manner: the power is as forceful as a hammer, to be sure, but it’s a hammer wrapped in velvet. With its grand touring engine and spaced out bodywork it’s a peculiar mix of design and engineering, and though its performance is inarguable, it’s a machine that left me a little cold. Neil Graham

I really liked the B-King and its “urban brawler” styling, but the oversize kite-shaped pipes would definitely have to go. The bike is extremely competent and refined, even, dare I say, pleasant. Ah, but therein lies the proverbial fly in the ointment for me. As I saddled up, my mind racing with the “I dare you!” attitude loudly proclaimed in the sales literature, I was somewhat disappointed to find that the neck-snapping bursts of low-end power that I was so anticipating were missing, apparently smoothed over by electronic babysitting systems. Now, don’t get me wrong, this thing hauls ass in a serious way (in fact it is un-Godly fast once the tach needle sweeps past 8K) but its lack of nastiness at lower rpm left me feeling somewhat unfulfilled. My proposed remedy: override the idiot-proofing electronics, add a few teeth to the rear sprocket—and Velcro yourself to the seat. Michel Garneau

I have a real problem with the B-King. The problem is I love to ride it. It behaved so well, I was tempted to take longer rides, and it easily obliged by not beating my backside to a pulp. On winding roads, it matched true supersport machines in agility, it handled highway jaunts effortlessly, and it easily managed the daily rush-hour commute. The B-King behaves with a refinement that belies its oddball looks, so much so that I could force myself to live with its bold styling—and it certainly turns heads. But on a brisk autumn morning ride I was forced to wear a backpack so that I could store the layers of clothing that would eventually come off as the temperature increased throughout the day—there’s no way to carry any luggage on this thing, even for a short ride. Now, if Suzuki develops luggage for the B-King, the machine’s usefulness will increase tremendously. I only hope the saddlebags won’t look like spaceship escape pods. Costa Mouzouris