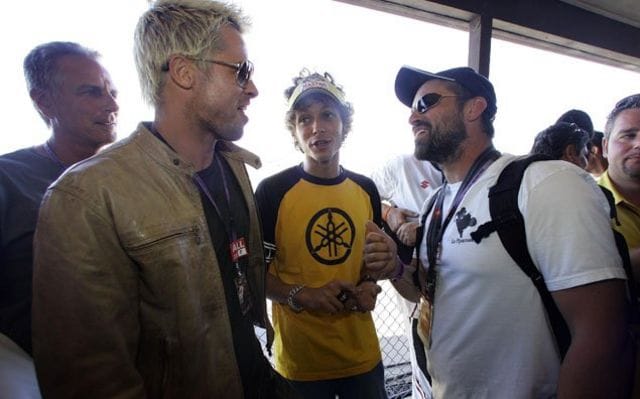 Brad Pitt and his femme-fatale wife, Angelina Jolie, have purchased an 850-year-old stone house in Eygalieres, France. The thespian duo had originally looked at buying the $20 million property a year ago, but lost interest when Mr. Pitt was informed that he would not be allowed to build a planned motorcycle track within the confines of its five-acre garden.

However, it turns out that the local council rescinded their previous decision and will now permit the construction of a private track on the Pitt property. So with boxes and motorcycles being packed for their trans-Atlantic trip, it was good opportunity to do a little snooping in the Pitt stable. Just what sort of motorcycle would you find in the garage of a man with a private race track?

It certainly wasn’t a surprise to find a representative of the exotic variety; while not too many people own a $60,000 Ecosse Heretic, there were also more common models too, including a MV Agusta Brutale, a Ducati S4R Monster, and a BMW GS1150 Adventure.

As nice as they might be, none of these motorcycles would exactly inspire someone to build a custom track though. No, for that kind of motivation you would have to look towards one of Mr. Pitt’s more recent purchases, a Ducati Desmosedici RR. Although Tom Cruise that took the honour of being the very first recipient of this limited edition model, Brad Pitt was one of many celebrities that paid the $75,000 required to own the Italian thoroughbred.

Considering the amount of children in the Pitt and Jolie household, the Pitt lane in their backyard promises to be a busy one.