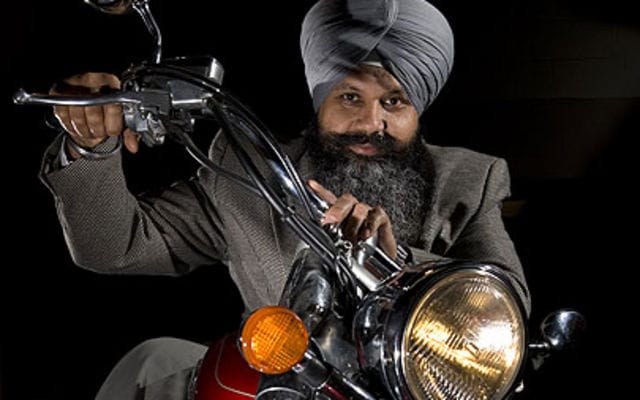 BRAMPTON, ON – A devout, motorcycle-riding Sikh who fought Ontario’s helmet law on the grounds his religion compels him to wear a turban, lost his court battle Thursday in a ruling decried by fellow Sikh motorcyclists as a "devastating precedent against minorities."

Ontario Court Justice James Blacklock ruled that while the impact on Baljinder Badesha’s religious rights were more than just "trivial", that consideration was overwhelmed by the "undue hardship" helmetless motorcycle riders would put on the province due to safety concerns and health-care costs. "The evidence before me shows that to ride a motorcycle helmetless involves the imposition of significant extra risks related to safety," Blacklock wrote in his 35-page ruling.

Given that the law is designed to keep people safe, Blacklock wrote that "the true importance of motorcycle helmets are understood by the rational person." Badesha, a devout Sikh, says his religion forbids him from covering his turban and he shouldn’t be made to choose between his faith and his motorcycle. The 39-year-old father of four saw his fight championed by the Ontario Human Rights Commission, which challenged the constitutional validity of the province’s Highway Traffic Act.

Ontario Attorney General Chris Bentley said Thursday he had yet to fully read the ruling, but added "from the Ontario government’s perspective, our concern was one of public safety." Badesha was handed a $110 ticket in September 2005 for riding without a helmet in Brampton, Ont., some 45 kilometres northwest of Toronto. Despite Thursday’s ruling, Badesha appeared to be in good spirits, joking outside the court that he might sell his motorcycle. Justice Blacklock said Badesha had 30 days to pay the fine, but defence lawyer Melvin Sokolsky said his client was considering an appeal.

Members of the Sikh community decried the decision and pointed to other Canadian jurisdictions, such as Manitoba and British Columbia, where Sikhs are exempt from provincial helmet laws. "It’s a wrong, devastating precedent against minorities," Harjiner Thind said in a telephone interview. Thind, president of the Vqncouver-area Sikh Motorcycle Club, said dozens of his members ride daily without helmets and they’ve yet to encounter any safety problems.

"In England, in Manitoba, in British Columbia, Sikhs are allowed to do that. I do it myself," he said. "Sikhs should be allowed. That’s the religious symbol; we cannot be separated from the turban." Badesha’s ultimate goal, said Sokolsky, is to see the Ontario legislature to grant an exemption for Sikh motorcyclists. "It’s a process and he understands that, and he’s prepared to do it in a lawful and reasonable manner, without undue emotion," Sokolsky said.

"He has certain rights he wants to uphold." Thind, who has followed Badesha’s case, said Crown evidence presented in court which suggested a turban can uncoil at high speeds was irrelevant because the tests were conducted in a wind tunnel which simulated speeds of 300 km/h. Sikhs in Ontario shouldn’t have to choose between the law and their religion, said Malkit Singh Rai, a member of the B.C.-based motorcycle club.

"I wear my turban all the time," he said. "I ride in town, highways, all over. We never have any problems."