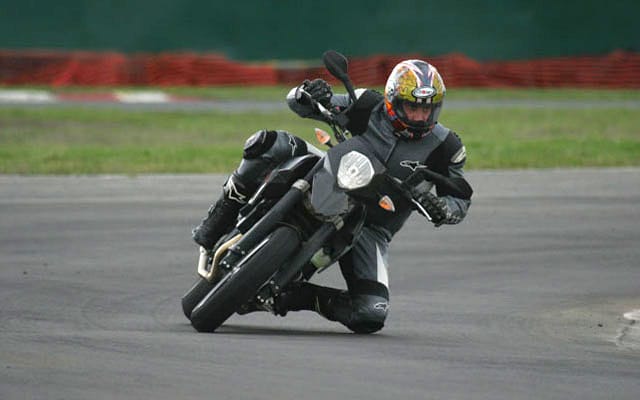 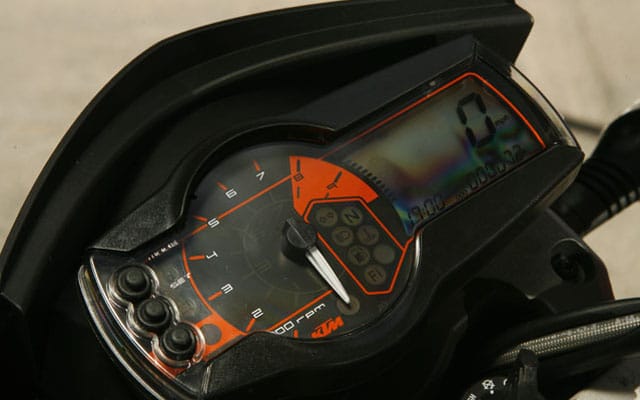 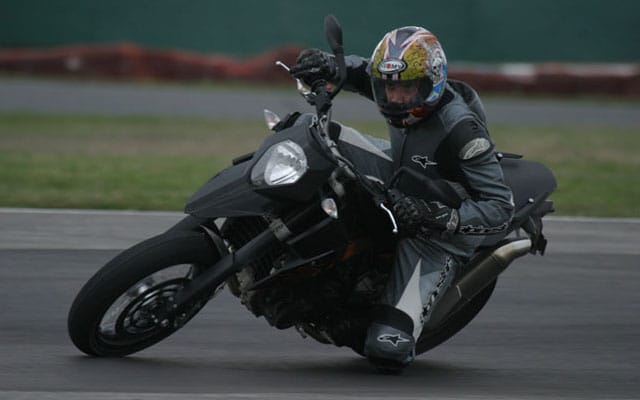 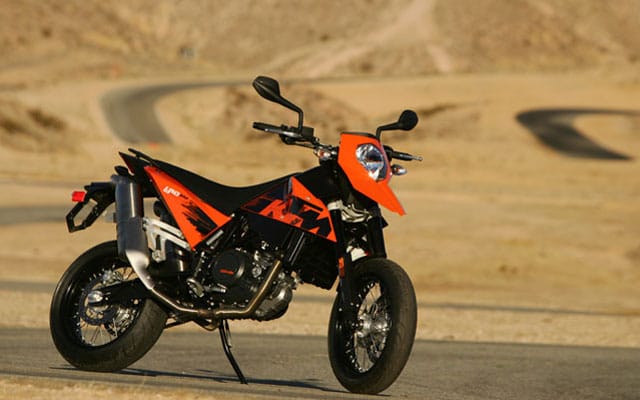 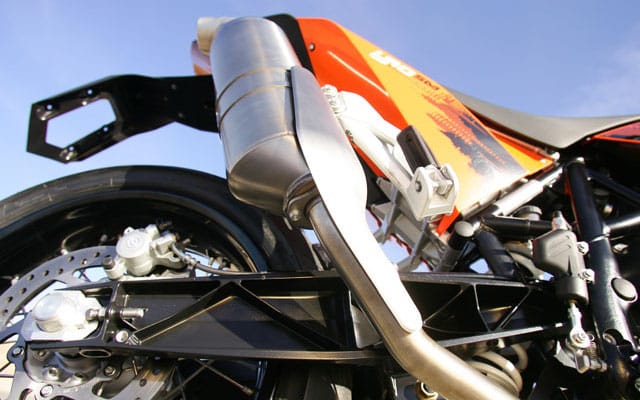 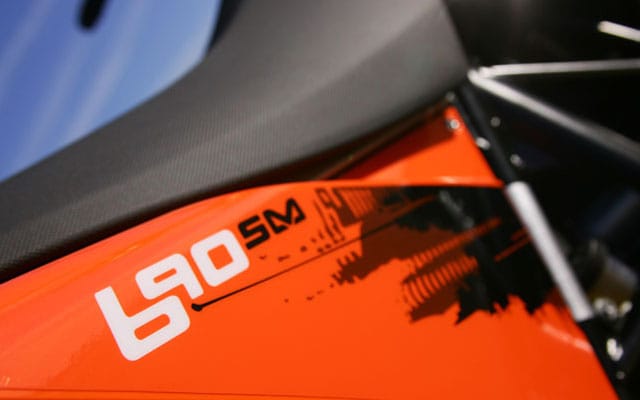 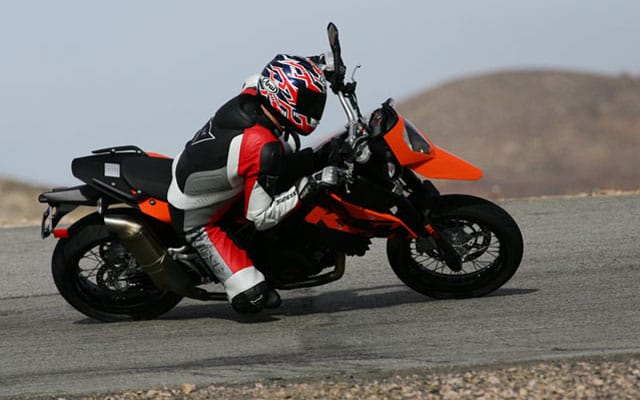 KTM atones for its past mistakes and finally gets a supermoto single right. KTM’s 690 Supermoto, the Austrian manufacturer’s ultimate road-going single is also an ideal track bike, so to the racetrack we take it, first to Streets of Willow Springs during the machine’s official California press launch, then to Shannonville’s Nelson circuit during a media day hosted by KTM Canada. Willow and Shannonville are tight, bumpy, and have corners where a broad handlebar will aid in muscling the Supermoto through cramped back-to-back chicanes. But we approach the 690 with reservations; the 625 SMC tested in these pages in 2005 is still fresh in our minds, and on our buttocks.

“It’s a lot smoother than the old Supermoto,” are the words from a nervously chuckling KTM staffer before we hit the track at Willow. He was referring to the 625. It is nearly impossible to overstate how severe the vibration was on the 625. During our test of the machine in Daytona two years ago, riders stepped off after 30 kilometres, rubbing their asses while internal organs jiggled. And there was no way to skirt the vibes. Short shifting and keeping the revs down made it shake and revving it just changed the frequency of the vibration, numbing hands, feet and rump. Exacerbating the bone-rattling vibration was a hard and narrow plank of a seat that felt like it was going to burn your buns.
But we won’t keep you waiting on the verdict: the vibration, thank heavens, is gone. The capacity of the engine is only up marginally, to 654 cc, but this is no boring-bar resizing of a shaky old engine. Completely new, the engine now sports the most novel of features: a gear driven balance shaft. KTM literature puts it this way, “A big leap forward in engine performance,” which can be interpreted as KTM’s apology for the 625’s hammering.

But it also refers to the engine’s newfound performance. The 690 is the most powerful single-cylinder motorcycle we’ve ever ridden. Fuel injection is a first for a KTM single, sourced from Keihin, and it allows the 690 to breathe through a 46 mm throttle body, compared to the 40 mm Mikuni mixer on the 625—but that’s only the beginning. An Electronic Power Throttle (EPT) is not a fly by wire system—a throttle cable connects to the throttle valve—but an electronically controlled servomotor can close the butterfly slightly to maximize torque or control wheel spin if revs soar. A drawback of big singles and twins can be severe engine braking if the throttle is snapped shut, but the EPT delays the butterfly’s closing to smooth the transition and help reduce rear wheel hop. Honda’s newest CBR600RR applies a similar approach, but uses a separate servo-controlled intake air-bleed passage. Appearing almost mundane next to the wizardry are the automatic cold start and idle functions and the altitude compensation. And if your riding is so balls-to-the-wall aggressive that it’s too much for the EPT to handle, a Ducati-style APTC slipper clutch prevents the rear wheel from locking and sliding.

Even though the engine is unrecognizable from the previous generation Supermoto, there are still reminders that you’re not riding a bland commuter. KTM seems to have worked out the seating on its twin-cylinder models, and the 690 seat is wider and more supportive than on its predecessor, but even at the racetrack where normally you wouldn’t notice a hard seat because you’re otherwise occupied, it is like sitting on a guardrail. But the power is enough to distract you from your numbing backside. Claimed horsepower is 63 and torque 48 lb-ft, which is almost what some current twins of similar displacement produce. Claimed dry weight is just 152 kg (335 lb), not bad for a big-bore street single. Vibration is a non-issue until nearing the 8,000 rpm redline, but with a six-speed transmission it’s easy enough to make haste without revving to the moon. Even at steady speeds exceeding the national limit, the 690 remains comfortably smooth; we’re beginning to forget the arduous time we’d endured on the last Supermoto. Street manners are composed, considering you don’t get overly zealous applying the throttle from a stop. Bottom-end power is brutish, which usually means high rpm power suffers, but not so with the 690; it just keeps pulling hard until redline. Overall gearing is very tall, four of the six gears used around town. A moderately aggressive twist of the right grip while turning from a stop provides a forceful forward push that quickly, yet smoothly kicks the rear tire out, especially on cold pavement. Controlling these low-speed slides is surprisingly easy, and probably attributable to the EPT system. Even with vigourous throttle use, the 690 manages 6.5 L/100 km (43 mpg), for a modest range of 208 km from its 13.5-litre fuel tank.

The single backbone frame of the 625 is gone, replaced by a steel trellis frame similar to the twin-cylinder 950 Supermoto. Steering geometry is not extreme, with 26-degrees of rake, a lengthy 112 mm of trail and 1,460 mm (57.5 in.) separating the wheels. The Brooklyn Bridge look-alike swingarm is a rigid item with the normally hidden reinforcing ribs on the outside. Handling is superb, once you get acclimated to the ultra-light steering from the wide handlebar. The lofty centre of gravity, high seat (875 mm, or 34.5 in.) and long-travel suspension exaggerate the sensation of cornering—quick transitions  make it seem like you’re vaulting on the end of a pole—but tracking is true and the Bridgestone Battlax BT-090 tires stick like fly strips. Despite its height the 690 can be flicked from vertical to full lean in an instant. Extreme lean angles are attained with confidence (not always the case with a tall machine), and stability is excellent, even with the throttle held nearly wide open through Shannonville’s fast and bumpy first turn. Aside from being powerful, the 690 is also the best handling single-cylinder bike we’ve ever ridden.

Most distinctive on the 690 are the tongue-depressor headlight fairing and the nearly vertical catalyst-equipped exhaust canisters. Looking a little like stacks from a Kenworth crossed with a canister vacuum cleaner, they emit the thump-thump-thump so beloved by singles enthusiasts. It is becoming unusual to see a sporting machine with a single front disc, but the 690’s Brembo 320 mm rotor and four-piston radial-mount caliper slow the proceedings quickly and fade free without adding unnecessary unsprung weight. KTM’s off-road roots are prominent on the $10,998 690 Supermoto; the upright riding position and the steel footpegs are pure motocross, and the single-cheek seat encourages you to be a more active rider and weight the pegs. Even with the massive improvements bestowed upon the 690 it remains a very focused machine. Most riders would probably be better served by the twin-cylinder 950 supermoto or the superb 990 Super Duke, but for those enthusiasts who pen angry letters to motorcycle magazines asking for the return of the single-cylinder motorcycle, take notice: you may never have a better single than this.

From the Saddle
After riding the 990 Super Duke and the 950 Supermoto—both agile machines—my first Streets of Willow Springs track session on the KTM 690 Supermoto is like switching to a 10-speed. On my first trip through the hairpin I gain on the grand old man himself, our British Isles correspondent Alan Cathcart, yet despite the machine’s light weight and agility, I turn into the corner too hard and ride off the inside of the track, which leads to an unsettling moment where the back wheel tries to lead the way to the next corner. With the wheel order sorted (front first then rear) the Supermoto truly impresses me. I’m not so sure I have the same effect on Mr. Cathcart.
—Neil Graham

Okay, so the 690 Supermoto looks funky. Newly appointed Motorcyclist editor Brian Catterson likens its nose to Mad magazine’s Spy vs. Spy cartoon characters, an association I made mentally even before reading Catterson’s review. I wouldn’t call it ugly, but any time a motorcycle’s styling is questionable, it had better have the performance to make up for its lack of visual appeal. And the 690 performs! Never have I been so stirred by a single, without being shaken. This thing absolutely rails on winding roads, yanks your arms straight between turns—and track day aficionados beware, leave some extra room at the apex, because although the 690 will lose some ground to faster bikes on the straights, it won’t stay behind for long.
—Costa Mouzouris