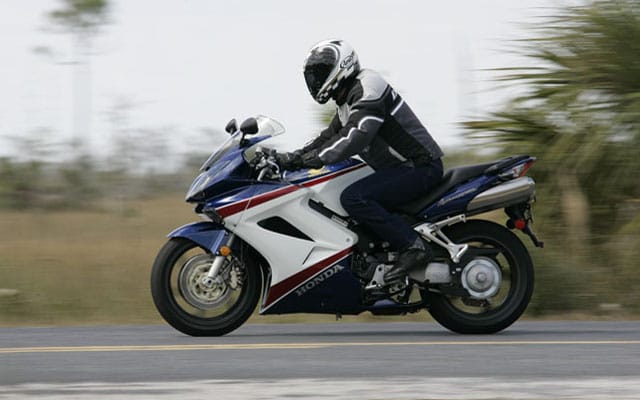 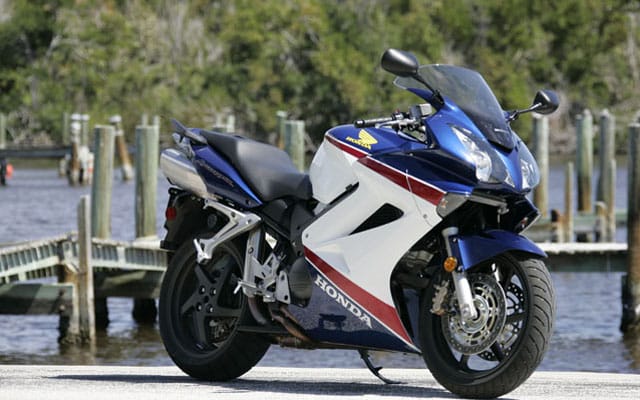 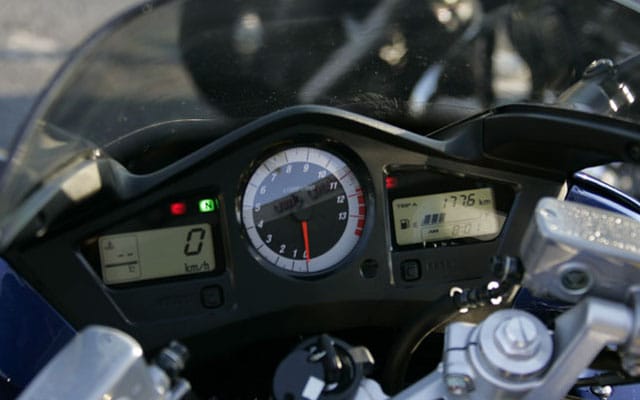 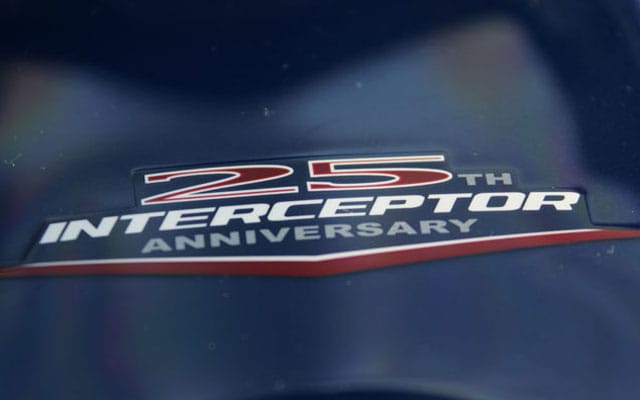 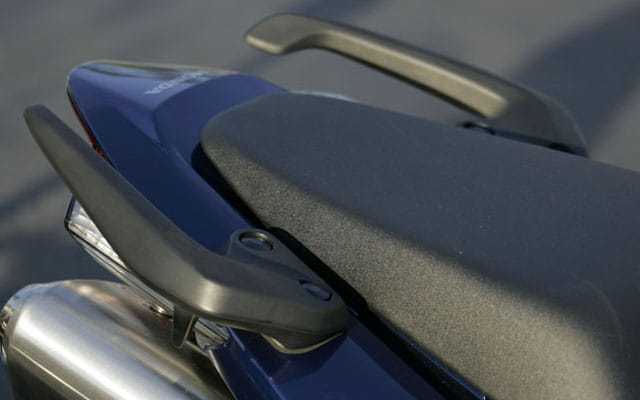 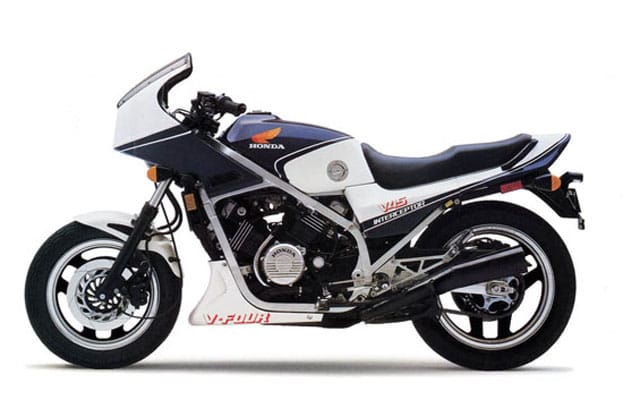 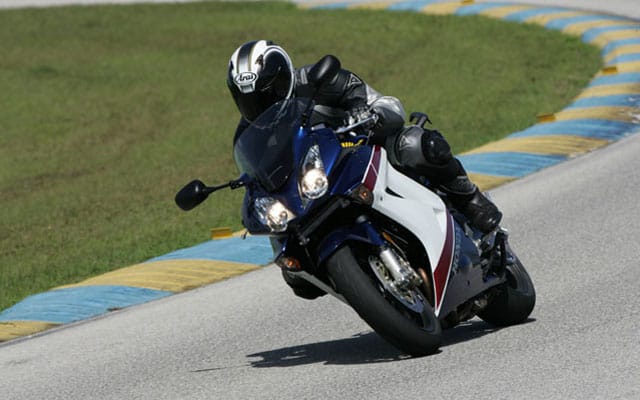 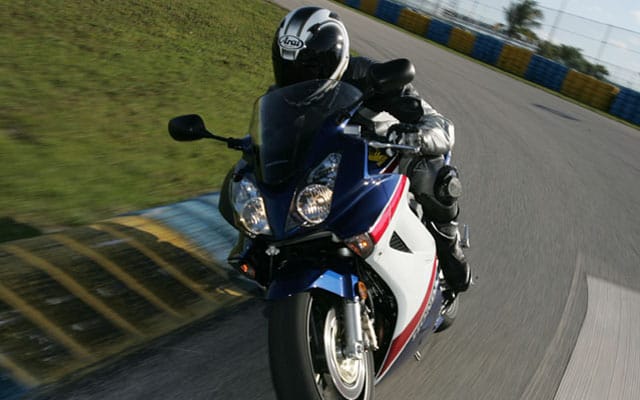 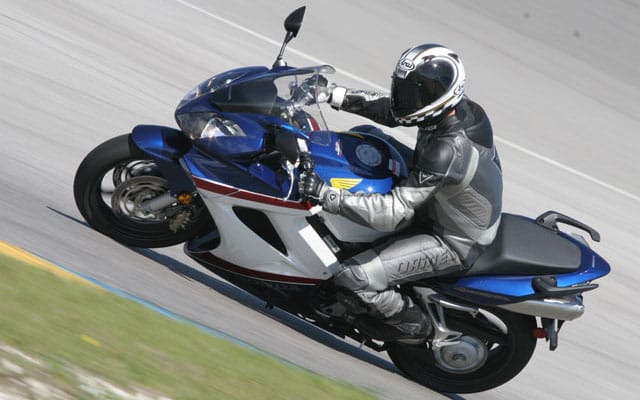 Florida is no sport-riding haven. Riding the 2007 VFR800F from Miami to the Everglades and then on to Daytona is an exercise in highway droning. To get the necessary fix of twisty pavement, we ride the VFR at Homestead Miami Speedway during Honda’s annual press launch, where we rekindle our acquaintance with the Interceptor on its 25th birthday.
Twenty-five years by today’s sport bike standards is an eternity, but there’s no fanfare accompanying this VFR milestone other than a red, white and blue retro paint scheme commemorating the Interceptor’s racing heritage. That racing connection has been long put to rest, however. Introduced in 1983, the VF750F Interceptor had an unusual (by motorcycle standards) 90-degree V-four engine layout and was at the top of the sport bike ladder with its race-inspired square-tube steel perimeter frame and 16-inch front wheel. Until the Interceptor came along, sport bikes were just standard motorcycles with spindly frames and a few factory performance items added. When Suzuki introduced the groundbreaking GSX-R750 two years later, aluminum framed motorcycles became the benchmark for track and street performance. Yet despite the performance potential of the GSX-R, the Interceptor won races. Flyin’ Fred Merkel won consecutive AMA Superbike championships on the Honda in 1984-86, followed by Wayne Rainey in 1987 and Bubba Shobert in 1988. Rueben McMurter won Honda’s first Canadian Superbike championship in 1988 on a VFR750. Then other manufacturers caught up and the next North American national championship for Honda would come more than a decade later with the RC51 V-twin.

Fast-forward to 2007 and the direct descendant of the original Interceptor, the VFR800F, is far removed from the high-strung race bike of the mid-1980s. It is now a sport-touring motorcycle. This fifth generation Interceptor was last revised in 2002, which is when its torquey liquid-cooled 16-valve engine received VTEC, Honda’s variable valve actuation system. The VFR is the only motorcycle in Honda’s lineup with VTEC, though several of the firm’s automobiles feature the acronym (for variable valve timing and lift electronic control) in their nameplates. The car and motorcycle systems differ. On the cars cam timing and valve lift varies with engine speed, whereas on the VFR, one intake and one exhaust valve operate below 6,400 rpm, the remaining two valves kicking in above that. This variable valve actuation is said to improve fuel efficiency and midrange power, while boosting high-rpm power. Honda’s literature claims, “Make no mistake—you’ll definitely know when your Interceptor shifts from two-valve to four-valve mode,” and, in fact, you’d have to be asleep to miss the boost in power and the change in intake and exhaust tone.

Honda V-fours have a familiar droning exhaust note, which hasn’t changed much since the first Interceptor. The only difference in engine sound over the years has been the whine produced by gear-driven cams in the 1986-2001 models. Honda reverted to chain-driven cams with the 2002 model. Compared to inline fours, the VFR’s 109-horsepower V-four is very torquey, claiming 60 lb-ft at 8,750 rpm. It pulls hard from low rpm, though it shudders like a V-twin below 3,000 rpm in higher gears; at speed, engine vibration is well isolated and the ride is smooth. The VTEC system is very noticeable and abrupt in operation. Acceleration is linear until about 6,500 rpm where a boost in power kicks in rather abruptly with a distinct increase in both intake and exhaust noise. It feels unnatural and requires some getting used to, as riding through turns at the threshold rpm can be unsettling. This abruptness was smoothed last year after criticism of the VTEC’s harsh transition, but it still lacks finesse. With the system’s almost novelty status, we wonder if it is even necessary on such a stout engine design. Six widely spaced gearbox ratios are well suited for the VFR’s intended long-distance sporting use, and shifting effort is light and precise, accompanied by light clutch effort.

Seating reflects the VFR’s racing lineage and tends more towards the sporting side of the sport-touring spectrum. Clip-ons are mounted above the top tripleclamp and extend upwards but still place the rider in a forward cant. Thumbs are sandwiched between the handlebar and fuel tank at full lock, but the tradeoff for this minor inconvenience is a large 22-litre fuel capacity that provides a useful 350 km range. The seat is narrow at the front, and wide and flat at the rear, allowing an easy reach to the ground and reasonable long-distance comfort. Levers are adjustable and instrumentation is clean and intuitive, if somewhat spartan in design. A large central tachometer is flanked on either side by LCD screens, which display the speedometer, fuel gauge, clock, odometer with two trip meters, ambient temperature and coolant temperature. A relatively high fairing and windscreen provide above average wind protection, with minimal windblast to the chest. Enough air gets past at higher speeds to help reduce strain on the wrists caused by the forward-canted riding position. Legroom is somewhat cramped for a sport-touring machine. The footpegs feature unusually long feelers; without them, the pegs could have been lowered about an inch without sacrificing cornering clearance, which is abundant for a quick street pace. At an elevated pace at the racetrack, the peg feelers touch regularly. A narrow pillion limits long-distance comfort for the passenger, through handy grab rails are an added measure of security.

Sport bike handling has come a long way in a quarter century and once rolling it becomes clear why the VFR is no longer race worthy. A rigid aluminum frame (Honda went from the original steel frame to alloy in 1986) features sporting chassis geometry (25.3-degree rake; 100 mm trail) and transmits road feel efficiently to the rider, but immediately noticeable is the bike’s high centre of gravity. The VFR gently rolls into turns and exhibits a slight tendency to right itself, requiring light, yet constant, pressure at the handlebar to keep it leaning. Steering effort is moderately heavy by supersport standards, mostly noticeable when pitching the bike aggressively into corners, and turning transitions are lazy yet fluid. In exchange for this lack of racetrack agility is confidence-inspiring stability and gentlemanly street manners.

Suspension feel is refined, coping well with the smooth Florida pavement and the occasional expansion joint, and remaining composed on the track at an elevated, if not racing, pace. When pushed hard the VFR wallows about on its softly sprung dampers. Minimal adjustability is available; the 43 mm fork adjustable only for preload and the single rear shock adding rebound damping. The shock’s preload adjuster is easily accessible via a knob located on the right side of the bike, just aft of the passenger footrest bracket.
Linked ABS brakes perform flawlessly, with light lever effort and easy modulation. The only criticism we could garner is the same as with any bike equipped with a linked rear brake: low-speed manouevres that require rear brake use for stability are awkward to perform.

Transforming the Interceptor into a true sport-tourer is a matter of installing the accessory saddlebags ($1,182) and top case ($446), adding a total 113 litres of storage capacity, but you’ll also need the mounting bracket for the top case at $239. The right saddlebag hinders access to the shock preload adjuster, so rear preload should be set before installing it, though it is easily removable. For 2007, Honda only offers the ABS-equipped VFR800FA model, with a base price of $14,699. Our tri-colour commemorative model adds $300. One might say that the Interceptor has mellowed after 25 years, but it hasn’t really been toned down. It is bikes like the GSX-R, ZX-10, R1 and Honda’s own CBRs that are now at the forefront of performance—but they are so sharply focused they’re impractical for daily use. Although the VFR no longer rules the racetrack, it has aged well.

From the Saddle
The Honda VFR800 confirmed its legendary status during our Floridian sojourn. It might no longer be the purebred sport bike it once was; nor is it the ideal touring bike—it’s built for riders seeking a well-balanced machine combining sporting character with long-distance capability. Although its long-distance comfort is slightly reduced compared with the pre-2002 VFR, the change in attitude will please those with a penchant for sport riding. With added luggage, it’s still among the best all-round motorcycles available. Despite its dated styling, riders will be attracted by its undeniable charm, even when compared to its contemporary sport-touring counterparts. It’s one of those rare motorcycles that reconcile one’s carnal cravings with practicality, offering the best of both worlds at a moderate price.
—Didier Constant

I have a lot in common with the Honda Interceptor. My career in the motorcycle industry began when the first VF750Fs were still in their shipping crates. Like the VFR, I’ve had some racing success, but can no longer keep pace with young hotshoes around a racecourse—and I’ve also become a little top heavy, and I no longer sport the fresh look of my youth. In aging the VFR800 has become a competent motorcycle offering reassuring performance and everyday usefulness that only comes with careful refinement. I can certainly appreciate that.
—Costa Mouzouris