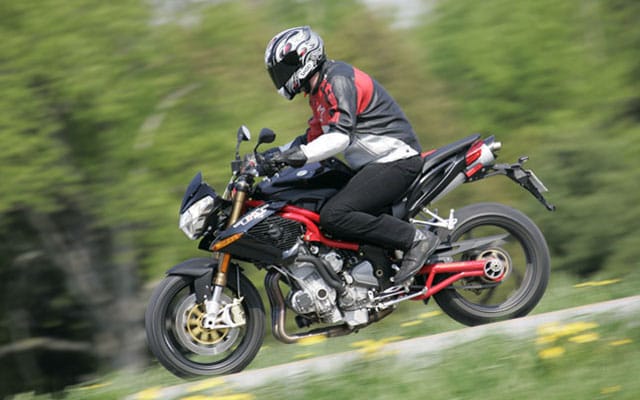 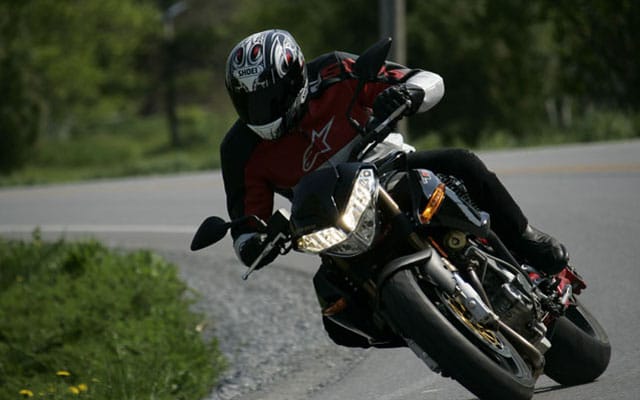 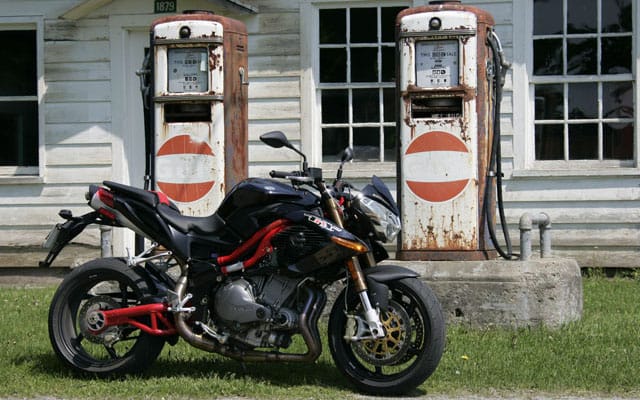 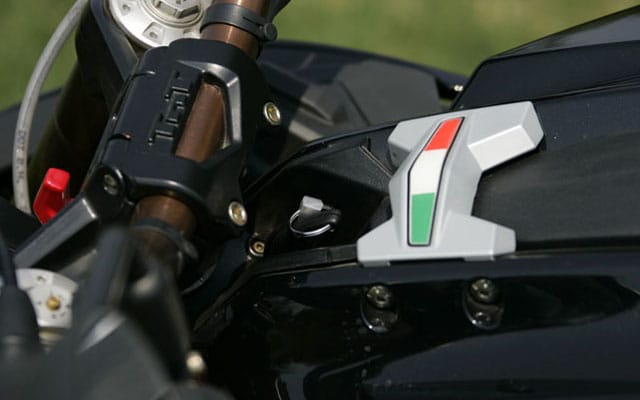 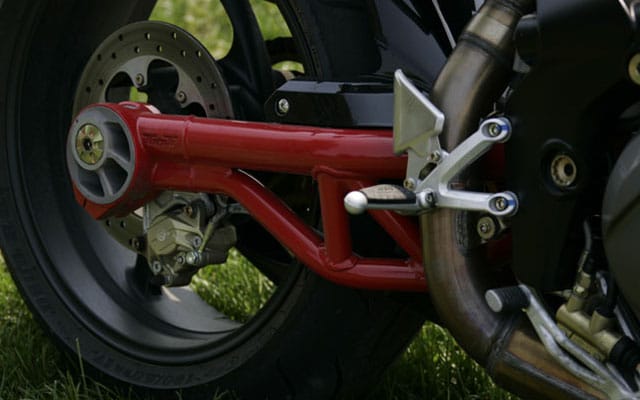 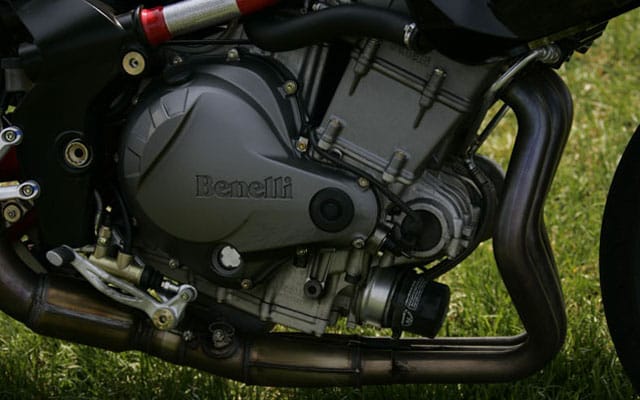 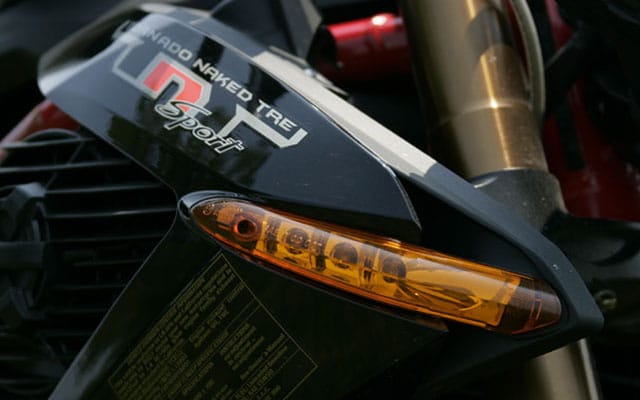 Recently acquired by Chinese motorcycle, conglomerate Qianjiang Group, Italian manufacturer Benelli makes a comeback in North America. Despite producing 1.2 million motorcycles worldwide, Qianjiang keeps Benelli volume low and exotic appeal high. “That thing looks like a Transformer.” That’s the response of a teenager eyeing the Benelli TNT Sport parked in front of a snack-bar restaurant. Prompted by the youngster’s visual cue, it’s not difficult to imagine the TNT standing straight on its rear wheel and morphing into a broad-shouldered robot. As with automobiles, Italian designers follow their own set of rules and the TNT’s futuristic angular styling often causes bystanders to stop and stare. Finding small groups of people bunched around the parked machine and pointing is a regular occurrence. Despite its unorthodox design, the machine is attractive. But its appeal doesn’t end with its looks. Starting the 1,130 cc liquid-cooled inline triple produces a seductively rich growl that changes tone when the engine is revved past 4,000 rpm and an exhaust-mounted butterfly valve opens for freer exhaust flow and subsequent increase in sound.

One of the oldest Italian motorcycle manufacturers, Benelli has struggled in the past, and its fortunes throughout the decades have waxed and waned. It seems with new ownership comes stability, as well as resources allowing research into expanding the product line. Benelli concept bikes shown at the Milan motorcycle show in 2006 included a parallel-twin naked street bike and a single-cylinder four-stroke motocrosser. The Tornado Naked Tre 1130 is a naked roadster based on the Tornado Tre 1130 supersport. This unapologetic streetfighter is not without its quirks, the first of which is immediately noticed when the handlebars are cocked and the top tripleclamp comes into contact with the plastic fuel tank cover, producing an annoying squeak. Engineers are certainly aware of this, yet redesigning the fuel tank would have probably cut into profits on a low-volume machine, so they let it slide. Another quirk is an ignition switch nestled deep inside a recess at the front of the fuel tank making it hard to reach the key.

Viewed from above, the TNT has an hourglass shape and is surprisingly narrow in the midsection, and when seated, it fits snugly between the legs. The upright riding position is very comfortable despite a seat that places the rider in one position, and at 780 mm (30.7 in.) most riders can get both feet squarely on the ground. Legroom is plentiful, but the footpegs are the shortest we’ve seen on a street bike and feet occasionally slip off. The side-mounted radiators manage engine heat well without transferring excessive heat to the rider, and the cooling fans that come on occasionally do so briefly and quietly. Passengers noted that the seat got warm from the high-mounted muffler, which proved comforting on a cool day, but might become uncomfortable in midday summer heat.

The ECU features two power modes, accessible from a dashboard-mounted switch. In the “free” mode, the full 135 horsepower (claimed) and 86 lb-ft of torque are available, while in the “controlled” mode power is slightly reduced for better control in wet conditions. There is a slight difference in power in the two modes, though the system is not as noticeable or effective as the one on the 2007 GSX-R1000, which has three different power curves. The switch must be in the controlled mode during startup or the engine burbles while cranking and refuses to start. According to Benelli’s website, using the controlled mode also “guarantees a decrease in fuel consumption of 10-20 per cent,” though even in this mode the TNT was thirsty for fuel, as consumption  averaged 7.9 L/100 km (36 mpg). The difficult starting (in the free mode) and excessive fuel consumption could be attributable to EFI mapping that we were told needed to be tweaked. Throttle response is mostly spot-on, though the bike occasionally hiccups on acceleration.

Poor fuel economy and odd quirks are almost forgiven once you’re rolling, but a firm clutch and heavy throttle reaffirm the bike’s hand-built feel. Power is instantaneous and brutish, even in the softer power mode. A quick blip of the throttle in either first or second gear lofts the front wheel skyward and huge torque is available from just above idle speed to its indicated 9,500 rpm redline. Acceleration is hard and linear, with no surges in power as the needle sweeps across the tachometer. If you’re not careful, the rev limiter hits abruptly, though spinning the engine near redline is not necessary for fast forward motion. On winding roads, the flat powerband allows the TNT to blast between turns with just a slight twist of the throttle and very little shifting of the close-ratio six-speed gearbox. First gear is rather tall, but abundant torque allows the bike to launch with minimal clutch slip. The chassis matches this useable powerband with precise steering response and stability. Mass sits low in the chassis, and at a claimed 199 kg (439 lb) dry, the TNT feels light and flickable. A wide tapered handlebar provides lots of leverage to muscle the machine  around, while enough steering lock is available to permit U-turns on single-lane roads. Steering geometry matches that of the latest sport bikes with 25-degrees of rake and trail at 95 mm. Wheelbase is a tad longer than the typical supersport at 1,443 mm (56.8 in.). Chassis rigidity is further enhanced by a beautifully sculpted tubular steel swingarm that holds the six-inch-wide rear wheel with large eccentric adjusters.

The TNT Sport on test is upgraded from the standard TNT with fully adjustable suspension including a huge 50 mm Marzocchi inverted fork with a friction-reducing coating on the slider tubes. The standard model has a non-adjustable inverted fork and a shock adjustable for rebound damping and preload. Another feature that sets the Sport model apart from the standard TNT is the Brembo radial-mount front calipers, as opposed to standard Brembos. Braking action is superbike strong, while the rear twin-piston caliper provides just enough power and feel for easily controlled stopping. Suspension compliance is typical of a European motorcycle, which is road-race firm, and on bumpier roads, it will occasionally kick you into the air, though the bike continues on its course without wavering. Softening the suspension considerably from the standard settings improves comfort without sacrificing handling integrity, though the ride is far from plush.

For exotic appeal, the Benelli scores high, and at $24,995 exclusivity is assured. The price is high, but the TNT isn’t aimed at the budget conscious, and is the type of machine a buyer would probably add to an already extensive motorcycle collection. You can buy into this exclusivity for thousands less by opting for the $20,995 standard model. The TNT’s nearest competitor, the Triumph Speed Triple, is more refined and, at $13,999, much more affordable, though you’ll have to endure sneering from your Italian-mounted riding buddies. If price is of little consequence, you can splurge on the TNT Titanium, with titanium exhaust, 141 horsepower and 90 lb-ft of torque for a whopping $39,995. If that doesn’t get you noticed in your neighbourhood, move. Those of more modest means can take heart that the stability offered by Qianjiang may result in a broader range of upcoming Benelli models priced below the TNT Sport, because how many among us could afford to make this their one-and-only motorcycle?