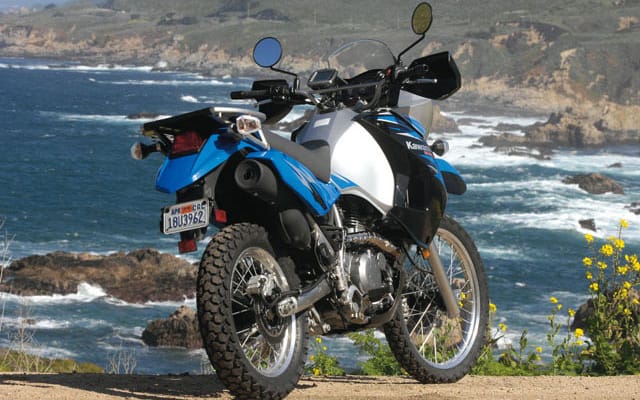 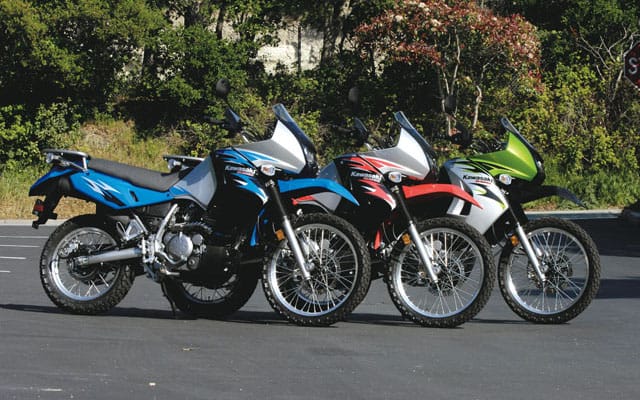 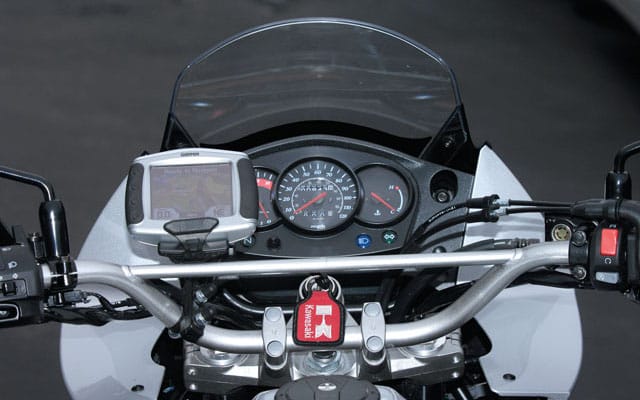 The KLR650, introduced in 1987, is the best-selling dual-purpose motorcycle in North America and Kawasaki’s fourth most popular machine. The 2008 model gains updates that build on the strengths of this cult classic. I never understood the appeal of the Kawasaki KLR650. I admit that my opinion of the bike was purely discriminatory; I passed judgment on it based entirely on its ungainly appearance. But I realized that thousands of riders didn’t share my distaste for the venerable dual-purpose single, and it has developed a dedicated cult following. And if ever there was a two-wheeled workhorse, it has to be the KLR: from dual-purpose use to long-distance sport touring to adventure-touring rental mule. In some countries, it is even the military’s preferred two-wheeler.

Why the machine has such a following is easy to understand. It has the right combination of real-world-useful features that make one overlook its drab exterior, and I was swayed after I rode the 2008 model during its California press launch in late April. A survey of KLR owners (and after a two-decade production run there are plenty to question) revealed that their number one use for the machine is back road carving, followed by city driving, then trail riding. This may explain why the redesigned KLR650 is seemingly more focused towards the street rider. I say seemingly because during the technical presentation, we are told repeatedly that the refinements on the new model are equally focused towards improved on-road and off-road performance.

One of the new design features that may concern the KLR faithful is the lowered suspension, which suggests reduced trail-worthiness. Front and rear wheel travel is reduced by 30 and 20 mm respectively to 200 and 185 mm (7.9 and 7.3 in.), but despite the reduced travel, Kawasaki claims the same 890 mm (35 in.) seat height and no reduction in ground clearance. This is because static sag has been reduced so the bike doesn’t squat as much when taken off the side stand. Suspension settings are also firmer for improved on-road handling, with much less front-end dive under braking. Fork diameter is increased to 41 mm from 38 mm and wheels are more rigid through larger diameter spokes. These changes improve stability while providing better front-end feedback. Preload and rebound damping adjustability is retained at the rear and a redesigned linkage provides a more progressive rate.

A D-section aluminum swingarm replaces the square-tube steel unit of the old model. The 100 mm bore and 83 mm stroke 651 cc liquid-cooled single gets mostly performance enhancing changes. Revised cam timing and reshaped intake ports improve engine breathing, while an all-new digital ignition system works with a throttle position sensor for more precise timing. As a cost-cutting measure fuel injection was rejected and the Keihin 40 mm CV carburetor retained. Cooling is improved by 20 per cent by a larger yet lighter radiator, and alternator output is up 2.5 amps to 17 for increased charging capacity. Transmission and final drive ratios are unchanged. Another improvement (and I asked about this because of a recent Technics query) is to the balancer chain “doohickey,” which has been strengthened, I am told.

The most obvious change to the KLR is in its appearance. Although it still won’t win any beauty contests, it is much improved over the former model, and most of the changes are meant to improve rider comfort. The frame-mounted fairing is larger and now incorporates side panels for added streamlining and increased weather protection. Dual headlamps replace the single lamp of the previous model, improving night vision as both are lit on high beam. Immediately noticeable from the cockpit is a very street-bike-like—and attractive—instrument cluster that has moved from the top tripleclamp to the fairing. Larger hand guards better protect hands against brushes with stray trailside branches, while providing improved cold-weather comfort. A wider seat is firm and flat, and remains quite comfortable after our 430-kilometre test day.

On a cool 12-degree morning the single fires easily with the choke on. After starting the engine, I remember the other reason why I had disliked the KLR: its engine sounds like an industrial pump. No horsepower figure is available, though output is modest (the 2007 KLR produces 47 hp at 6,500 rpm). The powerband is board-flat, the engine pulling strong from down low, and accelerating smoothly from as low as 2,000 rpm in top gear (60 km/h), while maintaining respectable top-gear passing power from 100 km/h. We immediately head for the highway, and at cruising speed wind protection is very good with no buffeting, with windblast directed at the helmet. The KLR maintains a 120 km/h cruising speed effortlessly. Dual counterbalancers smooth vibration, though some buzzing makes its way through the seat at speeds above 120 km/h. The bike is stable in a straight line, though the ultra-wide handlebar causes the slightest unintended rider input to translate into a mild weave.

Once we hit the canyon roads south of Monterey I begin to understand why such a homely bike has won the hearts of so many. Handling is far from sport-bike nimble, but the bike steers effortlessly, leans confidently, and handles both high-speed sweepers and tight switchbacks with poise. On one tight and bumpy stretch of road ridden in second and third gears with the engine hovering between 5,000 rpm and its indicated 7,500 rpm redline, the KLR rails over the pavement unperturbed. Trail-braking sport-bike style isn’t the KLR’s forte, but it turns quickly with little effort. The only undesirable handling trait is a tendency for the bike to run way wide when exiting turns hard on the gas. Steering geometry is the same as on the previous model with rake at 28-degrees and trail at 112 mm, though the new swingarm has shortened wheelbase by 15 mm to 1,480 mm. (58.3 in.).

When we hit dirt roads the KLR continues to impress. High-speed stability over loose dirt is very good, and the bike loses its tendency to run wide. Hitting the gas on corner exits in the dirt causes the back end to step out and the machine to carve a tighter arc. The bike is a tad top heavy, especially with a full fuel tank, and prefers open trails and dirt fire roads to tight, technical trails, but it will go nearly anywhere if the pace isn’t competition quick. On hard-packed dirt, the bike tracks very well, but as soon as the terrain gets slippery, so does the bike. Off-road handling will improve tremendously with the proper tires installed, as traction available from the general-purpose Dunlop K750 tires is not very good. On the street, they grip well enough to allow footpeg-feeler grinding lean angles, but I wouldn’t turn much harder than that, as they begin to slide. Plush rubber footpegs provide a vibration-free ride on the road, but once wet standing on them while negotiating tighter dirt sections feels like you’re stepping on raw squid, and you must be careful not to lose your footing.

Suspension compliance both on and off-road is exceptional. Air adjustability is gone from the fork and the shock retains preload and rebound damping adjustability. The firmer settings allow the bike to remain composed at a quick street pace, yet are plush enough for long-distance comfort, with good road feel and bottoming resistance in the dirt. The front brake, which by sport bike standards requires a firm squeeze on the lever, prevents face planting in the dirt, with very good feedback and modulation. The rear brake, like the front, now uses a twin-piston caliper (previously single-piston) that is a bit too strong for the dirt, requiring a light right foot. By the end of the day I feel enlightened. For years I erroneously misjudged a great motorcycle. It is free of useless frills while the list of useful features is impressive. A 23-litre fuel tank gives more cruising range than the majority of street-only bikes. Decent weather protection, all-terrain capability, a large standard luggage rack (now 90 mm longer and 130 mm wider), and accommodating passenger seating; they all add up to make the KLR an exceptionally competent motorcycle. It’s also easy to understand why Kawasaki didn’t start from scratch and introduce a model with an alloy frame, high-tech suspension and trendsetting gadgetry, deciding only to improve on the existing model’s weaknesses: why mess with a good thing?

A large array of touring accessories is available including saddlebags, tank bag and top case and a taller windscreen, with more on the way like a gel seat and heated handgrips. With a price just $100 more than the old model, now at $6,599, it’s easy to see why the 2008 KLR650 is one of the best bargains in motorcycling. Besides, I should have suspected that tens of thousands of KLR owners must have been onto something.