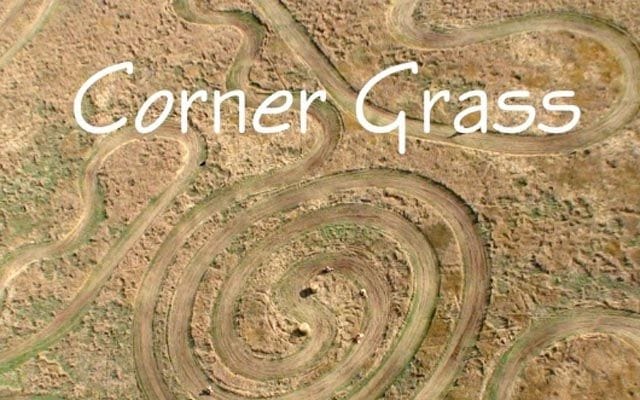 If you fly over Compeer, Alberta (pop. 10), you’ll see what appears to be an elaborate crop circle laid out in a field. In this remote part of the Canadian prairies, one could argue that extraterrestrial artists produced the intricate design, while sceptics would blame bored teenagers out for a laugh. But the serpentine doodle, which looks like it was traced by the finger of a giant, is the layout of the Corner Grass racecourse.

In this part of the country, the roads are long, flat and arrow-straight. It is perhaps this corner deprivation that motivated local Jay Macgregor to design this unusual off-road racetrack. Macgregor, who is easygoing and always greets one with an infectious smile, mowed a 12-kilometre maze-like track in his hayfield that winds around on itself countless times. The surface is smooth, consistent and fun to ride. Logs strewn across and in line with the track, massive truck tires laid flat and buried upright, and large concrete water pipes are among the 13 trials-type obstacles that line the course. The track is built at the very edge of Alberta, and if you overshoot the easternmost turn, you’ll end up in Saskatchewan. Macgregor built it, and they came. More than 150 competitors, mostly from the west and as far south as Colorado, took part in the first event at the track, a combined CMA/Second Gear Club hare scramble. I was inspired to attend after visiting the Corner Grass website (cornergrass.com), which features footage of riders roosting around corners and negotiating obstacles to AC/DC’s If You Want Blood. Lee Fryberger offered me the use of either of his Husabergs, an FE380 or an FE550. I opted for the big horsepower of the 550.

The starting procedure is fair and simple: you butt your front tire against a telephone pole laid flat across the start line and place your hands on your helmet until the flag drops. During the first Pro race, a Piper Super Cub buzzes riders from about 100 feet above, with a cameraman hanging out and filming the action through the dust.

The extra power of the 550 is an asset during the second moto, where I take the lead off the start and battle with Dylan Cartwright, the overall winner of the Veteran Expert class and a rider I’ve known for a long time. In 1985, Cartwright and I rode at the ISDE in Spain as rookies. I fought to get by Cartwright’s two-stroke KTM for an entire lap (it takes about 15 minutes to lap the course) before I unleashed the Berg’s big torque on the 500-metre-long straight, which is just before the obstacle section. I blew by the  KTM with about two gears to spare. The Husaberg’s onboard computer recorded my maximum speed at 133 km/h, which is faster than I would normally dare to go on such a course, but I felt comfortable on Corner Grass’ smooth track. The track is mostly forgiving, but not in the obstacle course, where the men are separated from the boys. I lost time in the obstacles and was passed by a couple of riders, finishing third overall.

The Pro class drew some fast competitors: Robin Dohlman was the overall winner ahead of Aearon Christienson, Shane Cutherbertson, Jason Schrage and Marty Halmazna, who recently returned from an impressive 18th place finish at the gruelling Erzberg Rodeo in Austria. Travelling to Compeer and meeting the locals is part of the fun; the sense of community is strong and it seems the entire region’s population pitched in to welcome visitors. Local sponsors provided a number of prizes given to lucky ticket holders. Podium celebrations were held at the community hall, where every winner received a round of applause. More than 70 youngsters signed up, some as young as six, and with several classes, most got a chance to stand on the podium. It might be out of the way, but the racing is competitive and the atmosphere is friendly; it’s an event for the entire family, and the paltry $40 entry fee includes a country-style buffet and an event t-shirt. As a competitor, the drive there might be long, straight and boring, but the course has enough turns to make you dizzy. Just keep an eye out for low-flying Pipers and doodling aliens.