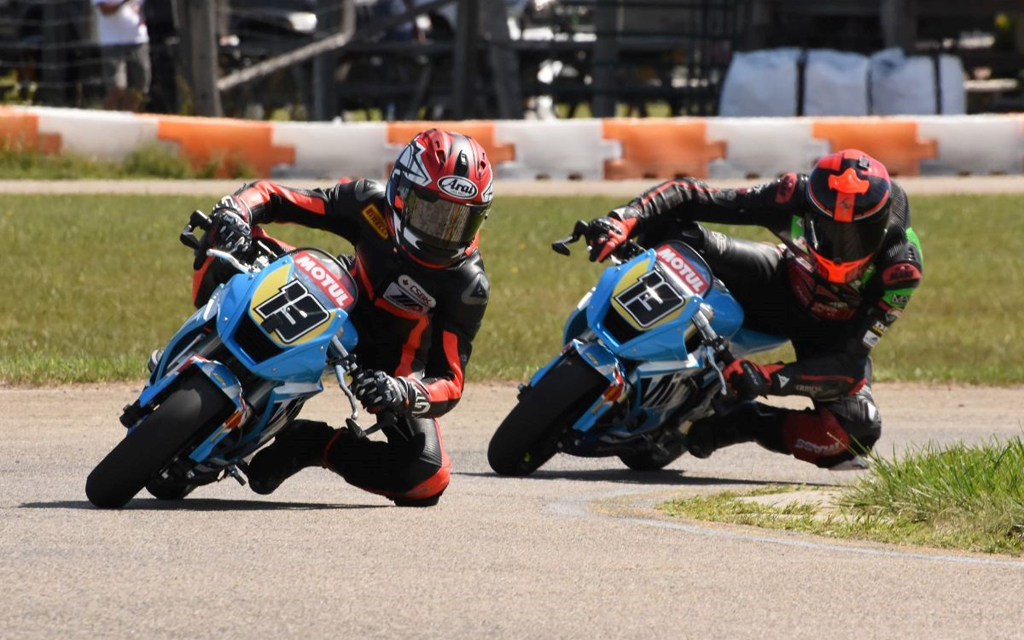 Vincent Lalande added one more tally to his resumé before departing the Canadian Mini Superbike National Championship on Sunday, winning the season finale of the feature Motul Canada Cup at Lombardy Raceway.

After clinching the inaugural national title on Saturday, the 14-year-old returned with only pride to play for on Sunday, but the situation didn’t change Lalande’s determination as he continued to set the pace over rival Benjamin Hardwick – albeit in finer margins than usual.

Lalande secured pole position earlier in the day but faced intense pressure doing so, with Hardwick smashing a new outright track record with a time of 36.767 and nearly snatching the heat race victory aboard their mandatory Pirell-mounted Ohvale machines.

The 13-year-old Hardwick wouldn’t be able to replicate his late comeback in the final race, however, as Lalande crushed the field off the start and never looked back en route to a comfortable victory.

The win – his tenth in eleven races this season – will put a bow on what was an illustrious debut season in the Canadian MiniSBK paddock, making himself known as a future racing star as he graduates to the Canadian Superbike Championship for 2023.

As for Hardwick, the youngster will return to the Motul Canada Cup grid to battle it out for next year’s championship alongside Michael Galvis, who completed the podium once again in third. The 10-year-old Galvis won’t be CSBK eligible for a number of years, leaving him and Hardwick to stake their claim as the next CMSBK champion.

Lalande added another pair of support-class victories to close out the year aboard his own SpeedFactory67 Buccimoto machine, winning the GP-1 and Moto-1 classes despite more pressure from Hardwick.

The two rivals traded fast laps early, with Hardwick showing better late pace aboard his Ohvale GP-190, but it wasn’t enough on either occasion as he was forced to settle for second in both races.

Galvis, meanwhile, would score added victories in the Sport-1 and Moto-2 ranks, coming out on top of a pair of close battles with Pierre Lalande, as the Colombian continues to shine aboard both the Ohvale and his Kawasaki KX65 machine.

Newcomer Jack Dunwoodie would win the Moto-3 and Sport-3 classes with a couple of strong efforts, as the 11-year-old celebrated his CMSBK debut with four victories on the weekend as he potentially turns his focus to the Canada Cup next season.

The inaugural season of the Canadian Mini Superbike National Championship will officially come to a close after a successful campaign that brought a number of future racing stars to the forefront, most notably Lalande – who will continue his progression into CSBK, likely as a member of the Super Sonic Race School Lightweight category.

As for the remainder of the CMSBK field, youngsters like Hardwick and Galvis will return to duel it out for the second edition of the Canada Cup, with many other names sure to join them in the quest to become Canada’s next national MiniSBK champion.

Main picture: Benjamin Hardwick (#19) was no match for champion and eventual race winner Vincent Lalande (#13) in the final race of the CMSBK season at Lombardy. Photo credit: Colin Fraser.