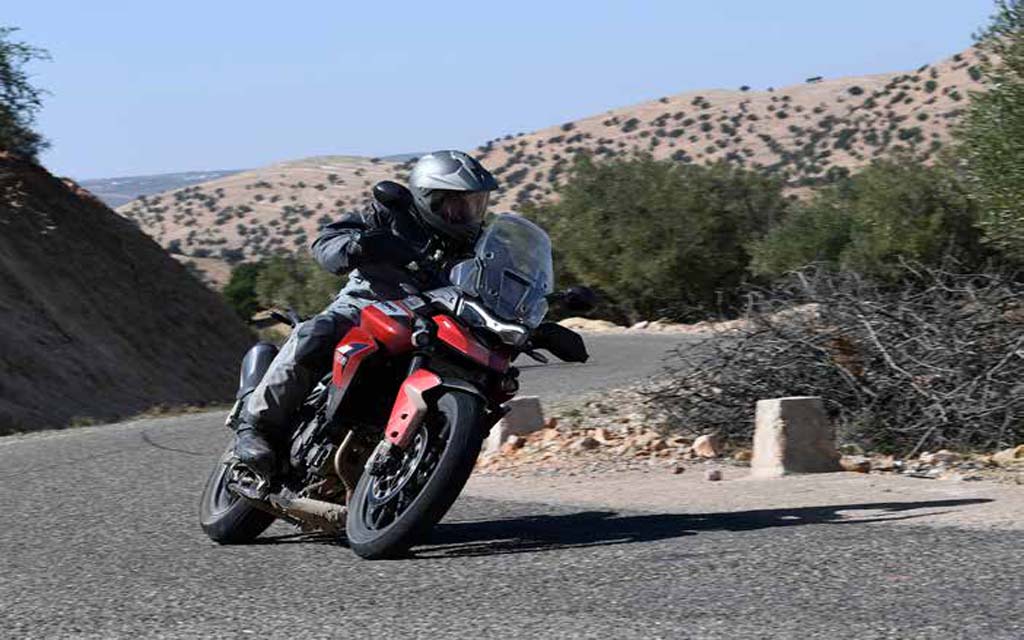 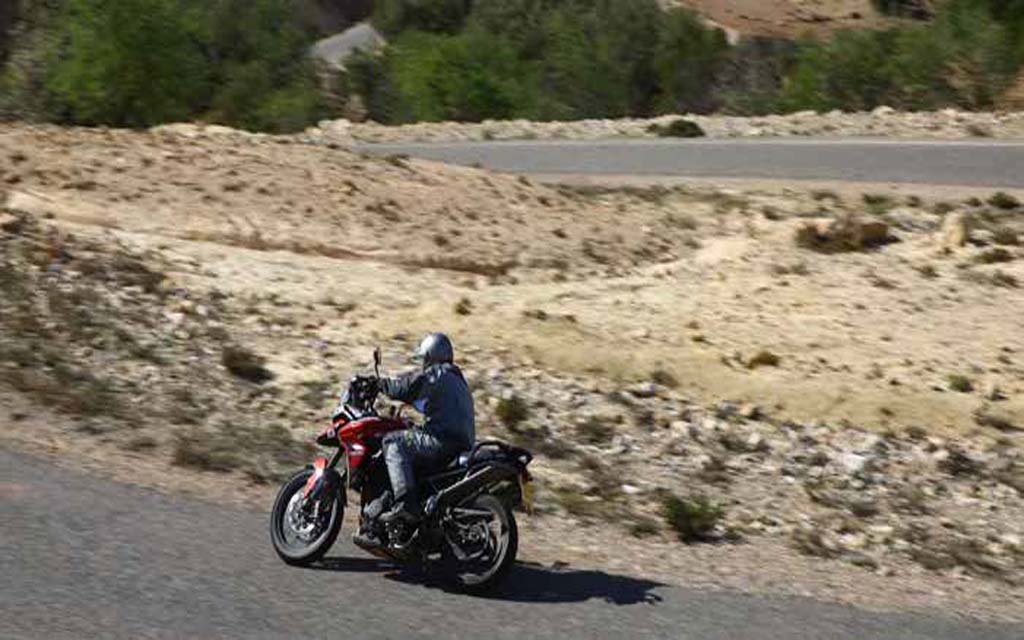 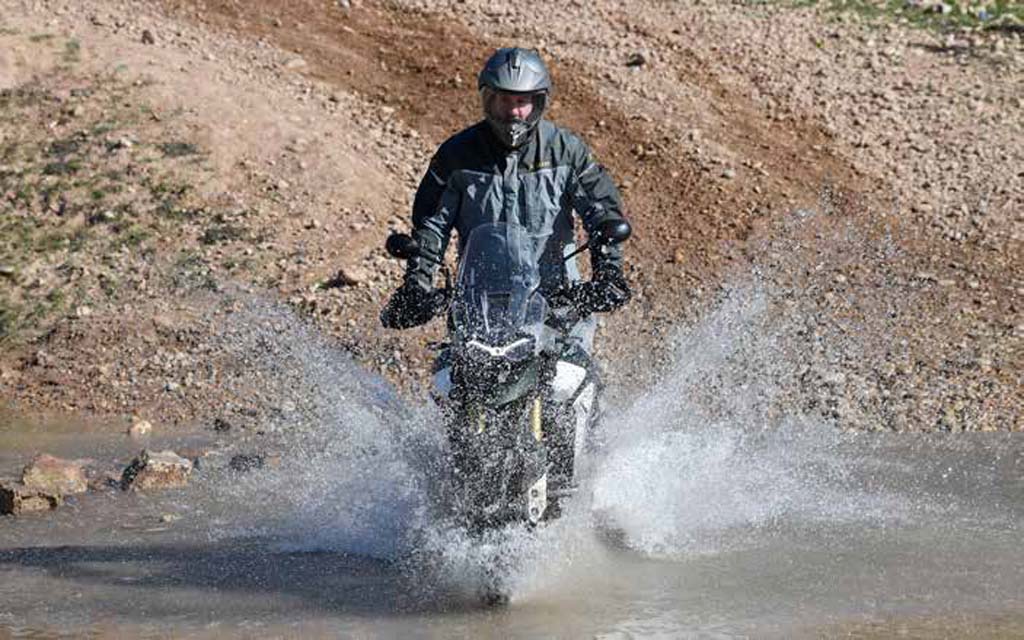 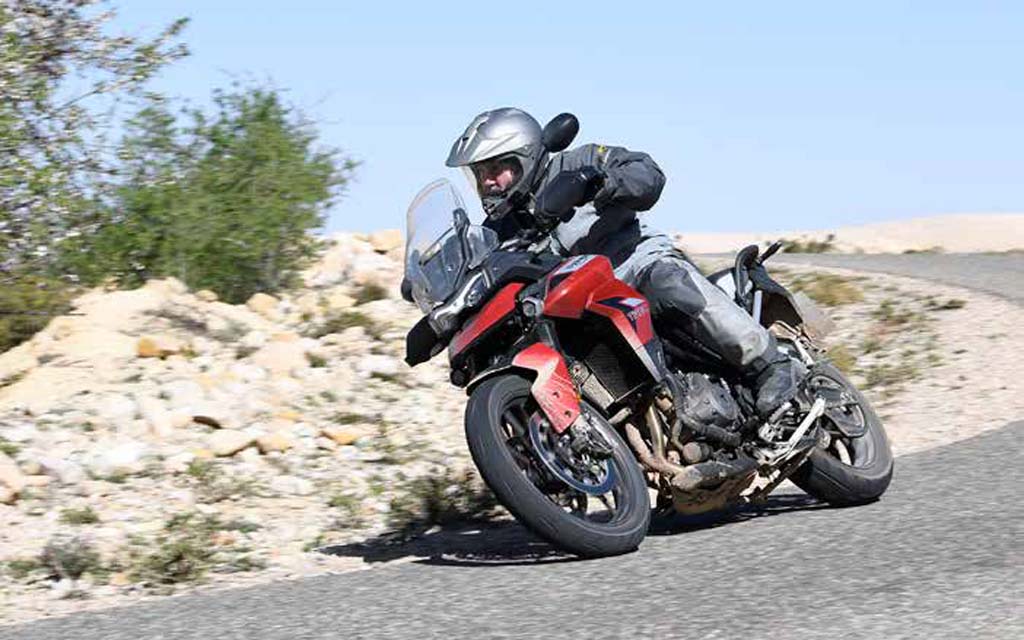 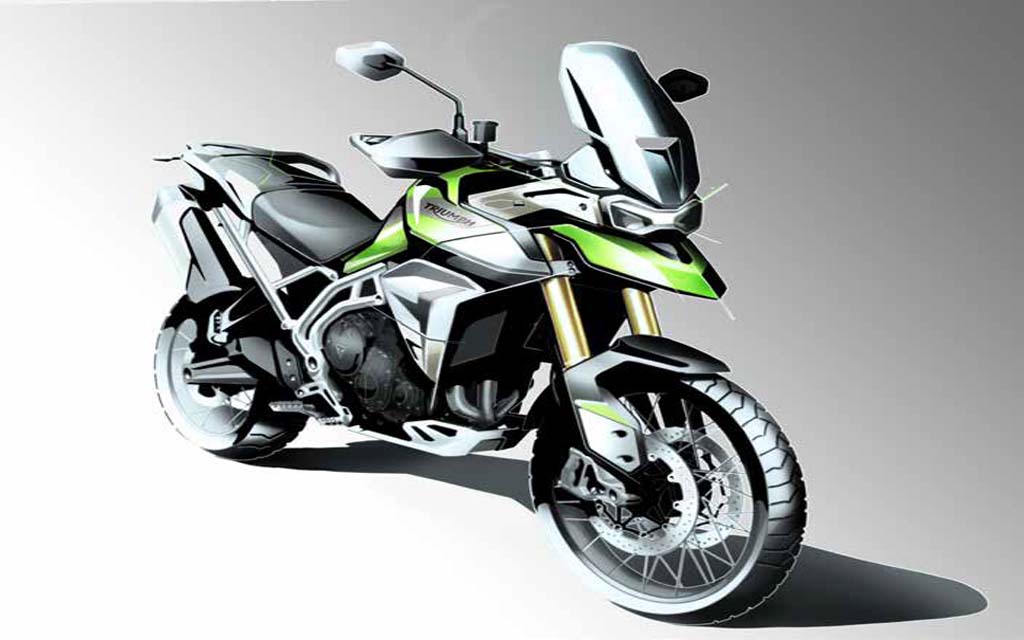 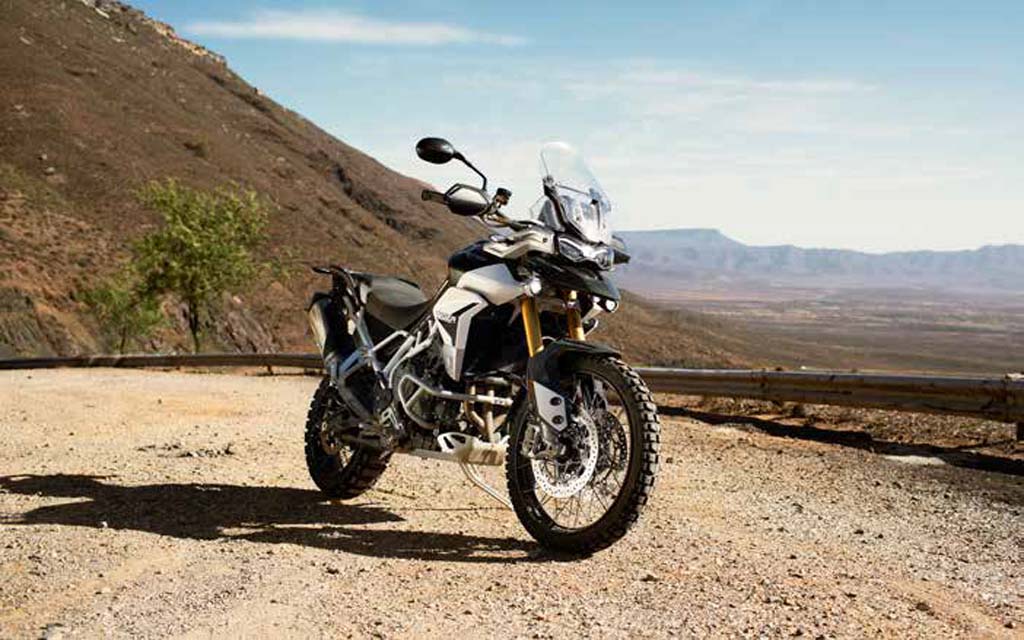 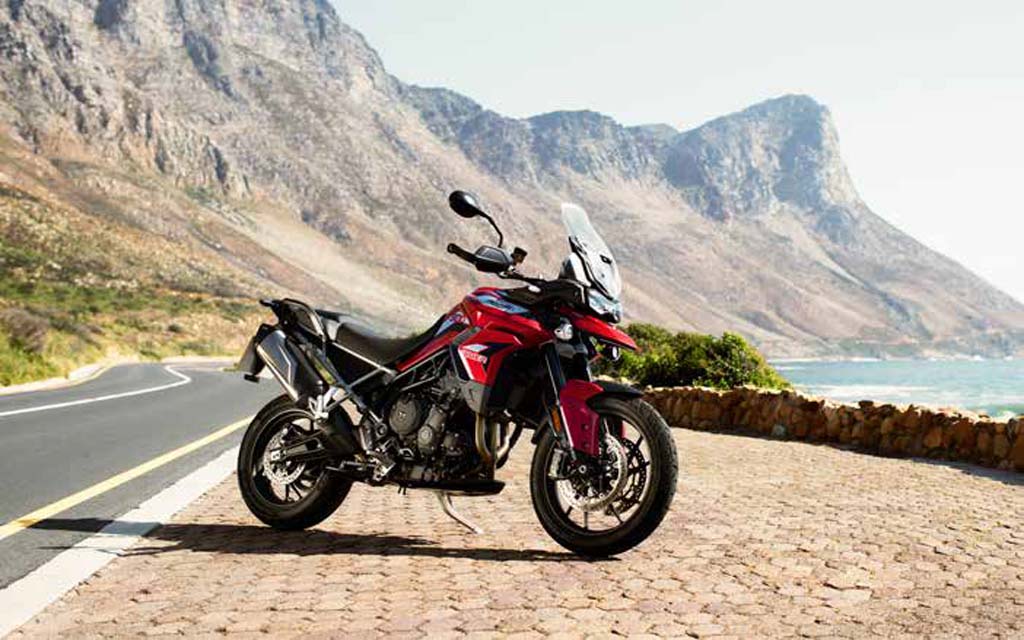 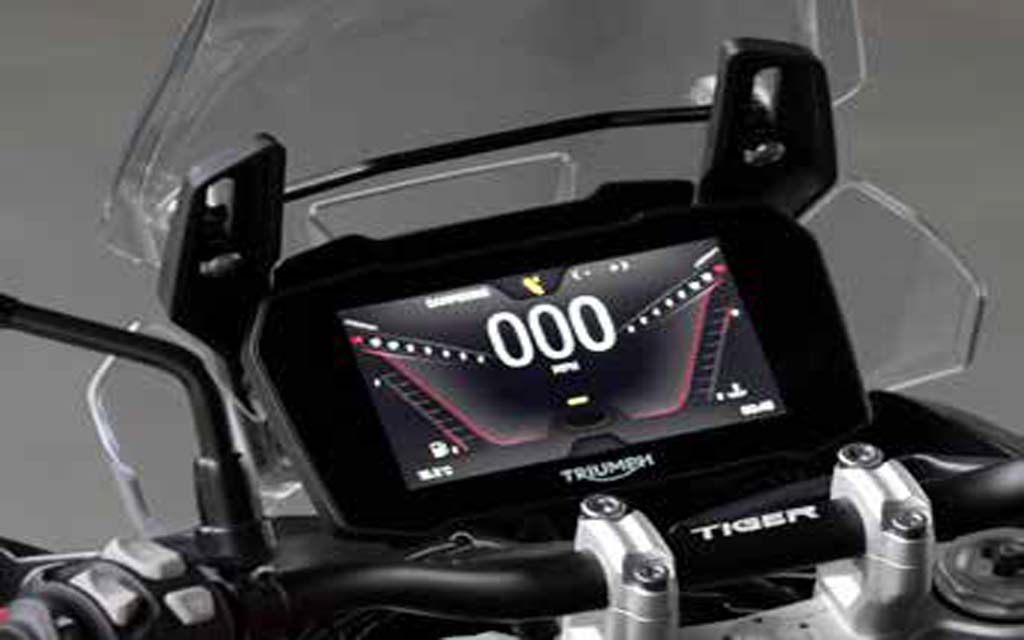 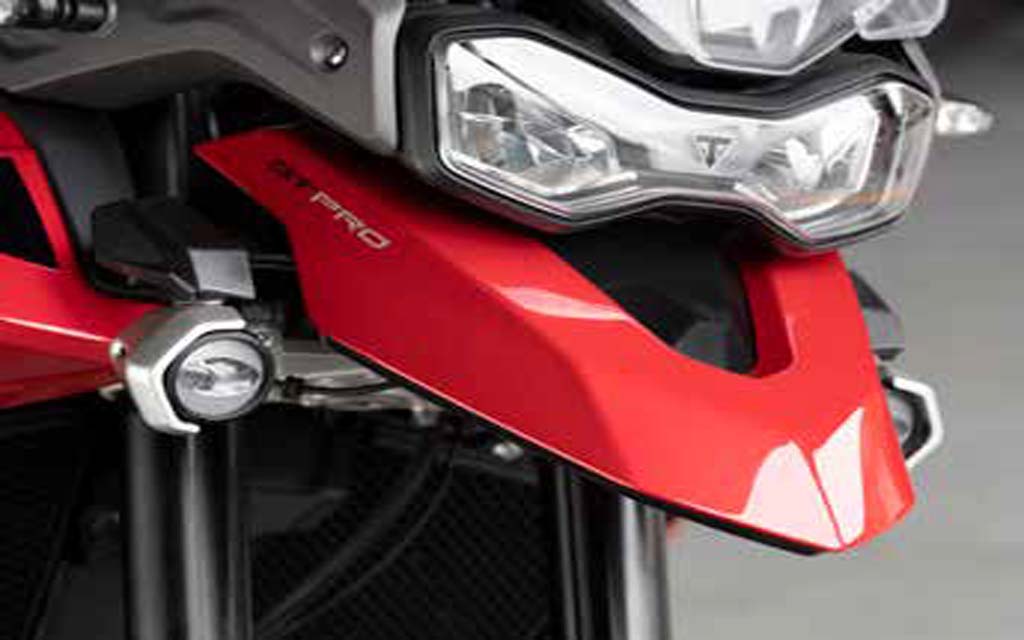 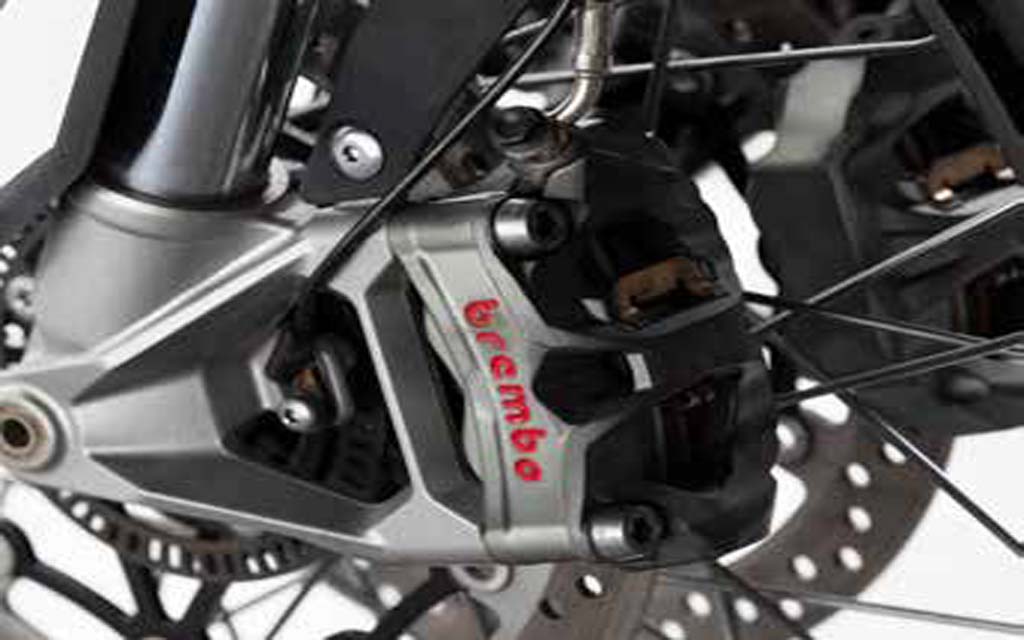 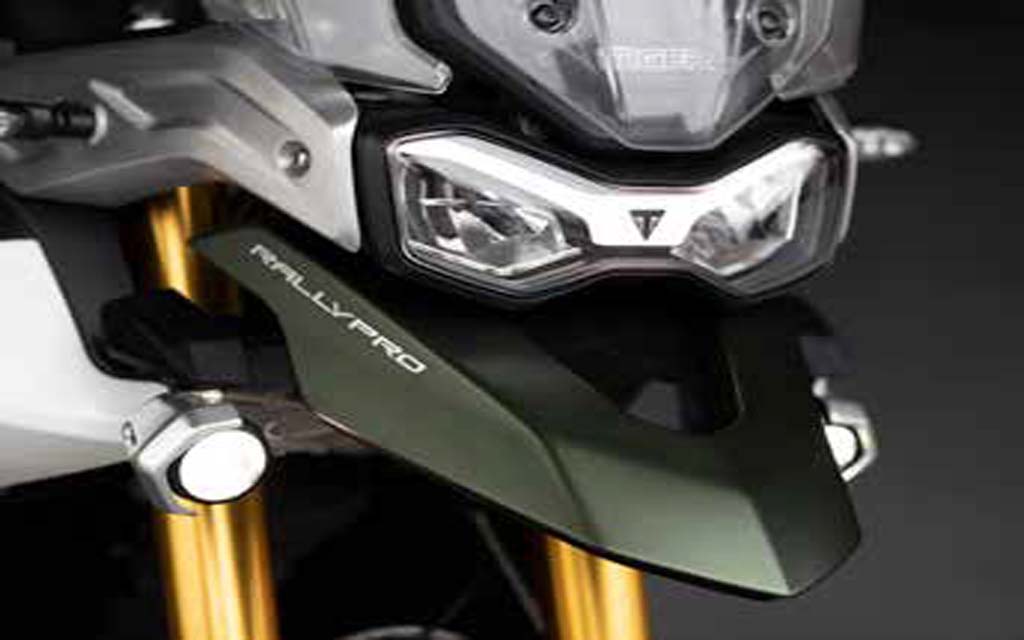 Nowadays, most motorcycle manufacturers offer adventure models, but some of them really go all out and invest a lot of resources into that category. We all know KTM and BMW are experts in this segment, but one must admit that Triumph is now trying pretty hard too, and the 2020 Tiger 900 is a perfect illustration of this.

For other motorcycle categories, such as customs, standards or sports bikes, a displacement upgrade is almost always an advantage. In the case of adventure bikes, things are different because these high-perched machines are designed to be used in two distinct worlds: on-road and off-road. When you add cc’s, you add weight, and extra weight can seriously compromise off-road riding.

Only a handful of gifted pilots manage to skilfully ride a mammoth of a bike such as the R1250GS Adventure in trails. Conversely, the lighter weight of under-1000 cc bikes makes them relatively accessible to mere mortals. So in the case of adventure bikes, a displacement increase is absolutely welcome if, and only if, it does not come with a weight increase. Otherwise, you simply sabotage one of their greatest assets.

Triumph seems to fully agree with this principle because, despite the displacement rise from 800 to 900 cc, the dry weight of the 2020 Tiger 900 did not go up a milligram; it is even down by about 5 kg on certain versions. What’s more, in order to make the three-cylinder engine more tractable in off-road riding, the British manufacturer gave it an entirely new character by changing the firing order, so that it now feels like a V-twin in the first half of the rev band. Then, from that point to the 12,000 rpm-plus redline, Triumph’s typical triple music is back. As for the chassis, Triumph also shows a fine understanding of adventure bikes’ particular requirements. For example, the new frame allows the engine to sit lower and improve mass distribution, and the Rally versions are equipped with very long-travel adjustable suspensions. Interesting detail: the rear footpegs are now bolted — instead of welded — to the subframe, which is also now bolted to the mainframe. This means that these parts can now be changed separately if they get damaged in a fall.

It looks as if Triumph has tried to fit its newer models with all the electronic functions you could imagine, and they did so with the Tiger 900 too. Besides the usual riding modes and various Bluetooth communication systems, it is also equipped with GPS navigation and a GoPro camera control system, to mention only these. Most parameters are controlled from the left handlebar and displayed on the seven-inch TFT colour screen. Using these kinds of systems always ends up being pretty complex and this one is no exception. You eventually work it out, but there is a lot to learn before it all comes naturally. As for many of the newer models nowadays, the riding modes, ABS and traction control systems work in conjunction with a six-axis Inertial Measurement Unit (IMU).

The base Tiger 900 is different in the sense that it is quite minimalist in terms of equipment. It has only two riding modes (Road and Rain), a conventional ABS system and a smaller five-inch screen.

For this world press launch, only the GT Pro and Rally Pro versions were available for testing. It was an unusually long media event, spread over two and a half days. The first day, aboard the GT, took us from Marrakesh to Essaouira on the Atlantic coast. Our guides seemed to know precisely where policemen were posted (they were smiling and waving at us when we passed by), so we had the chance to discover the GT without worrying too much about speed limits. What was a little more worrisome was the somewhat disorganized driving style of the locals in Marrakesh, plus the fact that we had to share the road with many very slow “vehicles.” Apart from scooters and small motorcycles, there were numerous carriages pulled by donkeys as well as heavily loaded donkeys that were distracting and called for extra cautious riding. We had to slow down a lot each time we entered a small village since the streets were filled with kids going to or coming back from school, animals of all sorts, vendors and pedestrians. All this made for some fine exotic scenery, but we had to be very careful.

In this kind of riding environment, the Tiger 900 GT Pro immediately reminds you why adventure bikes are such good machines. Perched high enough to have a high-angle view on traffic, the pilot is pampered with a comfortable and balanced riding position, a good windshield and access to all the gadgets one could wish for: up and down quickshifter, heated grips, screen with various display options, electronically adjustable rear suspension, connectivity, navigation system, etc. This motorcycle is light and very nimble, the suspension offers a fine balance between compliance and firmness, and the new 900 cc triple is torquey and fast enough to have fun while never feeling intimidating. All the ingredients are there for a very easy-to-use motorcycle that makes the pilot feel he is riding a thoughtfully designed and well-mannered machine. Which is fine, because at nearly $19,000 for a 900, one wouldn’t expect less.

The Tiger 900 GT Pro is a really nice road machine. Besides making you feel at ease almost immediately, it offers excellent stability, even at high speeds, and it remains absolutely solid on straight lines and into curves. On twisty roads with rough pavement in the mountains by the coast, the GT behaved very well and was easy to throw from one curve to another without ever resisting or misbehaving Good Adventure bikes are generally fun to ride on these kinds of roads, but this mid-size GT seemed to adapt in a particularly natural way with its fine mix of reasonable weight, fine performing triple and light steering. There are only a few negative points: Triumph made the seat narrower up front and we wish it would be more comfortable on long rides, the three-cylinder engine vibrates significantly in the second half of its rev range, and there are so many electronic functions that you have to do a mental exercise each time you want to look for specific data or change a parameter.

Finally, it is worth reminding that Triumph offers a Low version of the GT. With its dished seat and a reduced suspension travel (from 180 to 140 mm up front, from 170 to 151 mm rear), seat height is down from 810/830 mm to 760/780 mm, which makes a big difference for shorter pilots. The GT Low was not available for testing at this press launch, so we can’t comment on its actual performances. Logically, though, it is expected to have somewhat stiffer fork and shock settings as well as reduced off-road capabilities.

Motorcyclists who have ridden big and heavy 1200 cc or more machines that require riding with constant care in order to avoid damaging a wheel or puncturing a tire will certainly appreciate the peace of mind that comes with such a light adventure bike. The combination of lightness, narrowness, quality suspension and the excellent tractability of the three-cylinder engine allow the Tiger to perform admirably well on more challenging trails too. The fork and monoshock display remarkable absorption capabilities and the engine calmly delivers its solid low-end torque in such a way that you’re never afraid that it could let you down and stall in a tricky moment.

On many adventure bikes, choosing the Off-Road mode also adjusts the level of intervention of the traction control system. In the case of the Tiger 900 Rally Pro, Triumph chose to deactivate it altogether when picking Off-Road Pro. No traction control can mean a rear wheel sliding erratically on a slippery surface, but this is not a problem in the case of Tiger 900 because the engine delivers its 94 hp in a very linear fashion and the new firing order seems to help the rear tire find traction. Even if the terrain is difficult and slippery, you don’t feel the need for an electronic helper when accelerating. The Off-Road Pro mode also deactivates the ABS on both wheels, but it takes only a few seconds (once you know where to go) to navigate into the menus and reactivate the ABS on the front wheel if you so desire.

All things considered, everything is always a matter of choices and compromises with adventure bikes. A bigger engine brings better performance on the road, but its extra weight has a negative impact on off-road rideability. Conversely, a smaller displacement engine allows the manufacturer to make the whole motorcycle lighter and maximize off-road behaviour and capabilities, but with a limitation on street performance. By upgrading the Tiger from 800 to 900 cc and going for a new design that keeps the weight at a reasonable level, Triumph has created a decent, although not an outstanding adventure bike with the road-oriented GT. The Rally, on the other hand, is a revelation. On the road, it is practically as well-behaved as the GT, even if it is a little taller. And off road, it is simply brilliant, to the point that it can legitimately be compared to the KTM 1090 Adventure R, which is one of the top compliments you can do to any model in this category. Too bad Triumph asks so much money from motorcyclists who will want this bike — close to $20,000 — but the fact is that with its fine balance and few compromises, the Rally Pro is clearly the most desirable member of this new Tiger family.