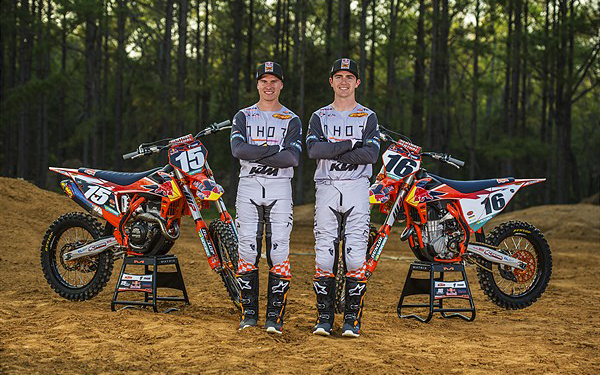 With the start of the Canadian Pro MX race season now in sight, the KTM Red Bull THOR Factory Race Team is Ready to Race. The long-awaited Triple Crown Series MX Tour kicks off on July 25th at Gopher Dunes, Courtland, ON.

The 2020 KTM Red Bull THOR Factory Race Team is being piloted by Cole Thompson competing in the 450 class and Jess Pettis in the 250 class. Cole and Jess both raced in the AMO Reloaded – Ontario Provincial Series last weekend with Cole scoring a 2-2 in the 450 Class and Jess with a 1-1 finish in the 250 Class.

“I’m excited to finally go racing with my team. It’s been a long off season but I’m thankful we can be racing once again in these uncertain times. I’ve made some adjustments to the bike which helped me feel more comfortable and with that I was able work on my weaknesses from last season. Now I feel ready more than ever to battle for the championship and put my KTM 450 SX-F back on the top step of the podium.”

Jess Pettis will be back aboard his KTM 250 SX-F. Having faught for SX and MX championships Jess is no stranger to the podium, placing 2nd overall in 250 class at the 2019 MX Tour Championship. Coming back from an injury that sidelined him at the end of last year, Jess is looking to bring the fire back to the 250 class.

“It’s been a very strange year to say the least, COVID has really changed everyone’s plans, but I am very thankful to be going racing and get our championship underway on July 25th. It’s been about 10 months since I’ve raced, due to my ACL recovery, but the time off has helped my recovery and my body is healthy. I’m feeling comfortable on the KTM 250 SX-F and can’t wait to see the hard work pay off.”

Heading the team again in 2020, is no one other than Jean-Sébastien Roy. With years of experience in the game competing and coaching alongside some of the greatest, JSR brings a level of knowledge that is sure to make a difference.

“Everyone is excited to start racing again after everything that’s happened. Cole and Jess are as ready as ever to get back to competing and are ready to prove that they deserve the championship. The KTM Red Bull THOR Factory Team is proud to be back racing in Canada especially because a lot of the racing has been cancelled for 2020. We’re happy to be able to show what KTM bikes are capable of. Big Thanks to the Triple Crown Series promoters who worked hard to get us a season in 2020, we’re excited to hit the dirt.”