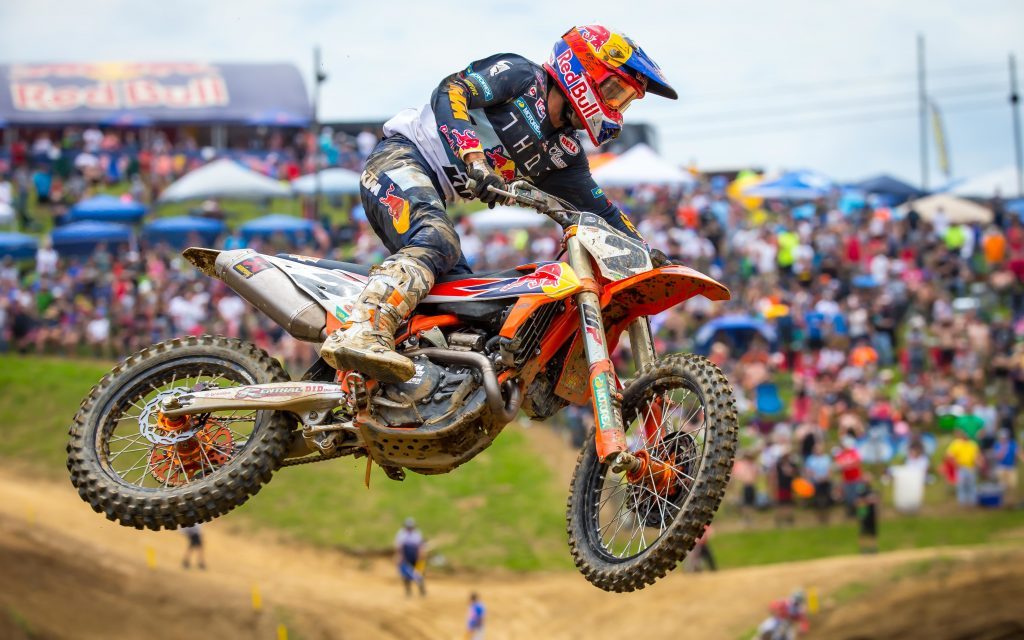 After one week off, the 2019 AMA Pro Motocross Championship resumed on Saturday with Round 4 taking place at High Point Raceway in Mt. Morris, Pennsylvania. It was big strides for Red Bull KTM Factory Racing’s Cooper Webb, who solidified his best overall finish of the season in fourth following a podium performance in the second moto. His teammate, Marvin Musquin, fought back from bad starts all day to put forth two valiant performances and salvage an impressive sixth overall despite the challenges.

Webb, who qualified fifth overall after topping the first session, got off to a great start in 450MX Moto 1, where he rounded the opening lap in third aboard his KTM 450 SX-F FACTORY EDITON. The reigning 450SX Champion charged hard in the early laps to climb into second by lap four. However, while battling for third, Webb had a big crash that set him back several positions in the overall running. Despite the shake-up, he ultimately salvaged seventh in the moto. In Moto 2, Webb got off to a great start where he positioned himself in the lead early on. He led the first eight laps of the race before engaging in a battle with Ken Roczen, who ultimately took over the lead at the halfway mark. Webb continued to battle from second and with three laps to go he was passed again, where he ultimately secured third in the race. With 7-3 finishes, Webb finished just off the overall podium in fourth.

Webb: “Today at High Point was a much better day and a huge turnaround for me. My starts were great all day and I made a few mistakes but I was happy to battle up front like I did. I even lead the second moto for about 20 minutes – I haven’t been able to do that so far this season, so that was awesome. Fourth is my best overall, so it was a good weekend and I’ll keep building from here.”

Meanwhile, Musquin set himself up for a favorable start to the race day as he secured second overall in qualifying. In Moto 1, he didn’t get off to the best start where he came through the opening lap just inside the top-10. He worked his way up to eighth by lap two and continued to battle his way through the field to ultimately finish fourth in Moto 1. In the second moto, Musquin experienced some bad luck off the start after powering his KTM 450 SX-F FACTORY EDITION to a good jump off the line. He came around the outside with a little too much momentum and ran into the back of the rider ahead, causing Musquin to go down amidst a big crowd of riders in the second turn. Beginning in dead last, Musquin made an impressive charge early on to find himself inside the top-10 by the halfway point. He continued to battle his way up to ultimately finish seventh in the moto and sixth overall for the day.

Musquin: “It was a tough day. I was feeling great but unfortunately, I didn’t have a good start in the first moto and I couldn’t make good passes right away, so I lost a bunch of time in the first few laps. In the second moto, I went around the outside off the start and was really aggressive and ran into the back of another guy. I was dead last and came back to seventh, so it’s very disappointing because I love that track and I felt pretty good but when you crash on the start there’s nothing you can do. The top six riders were up front and the gap was just too big to catch them.”