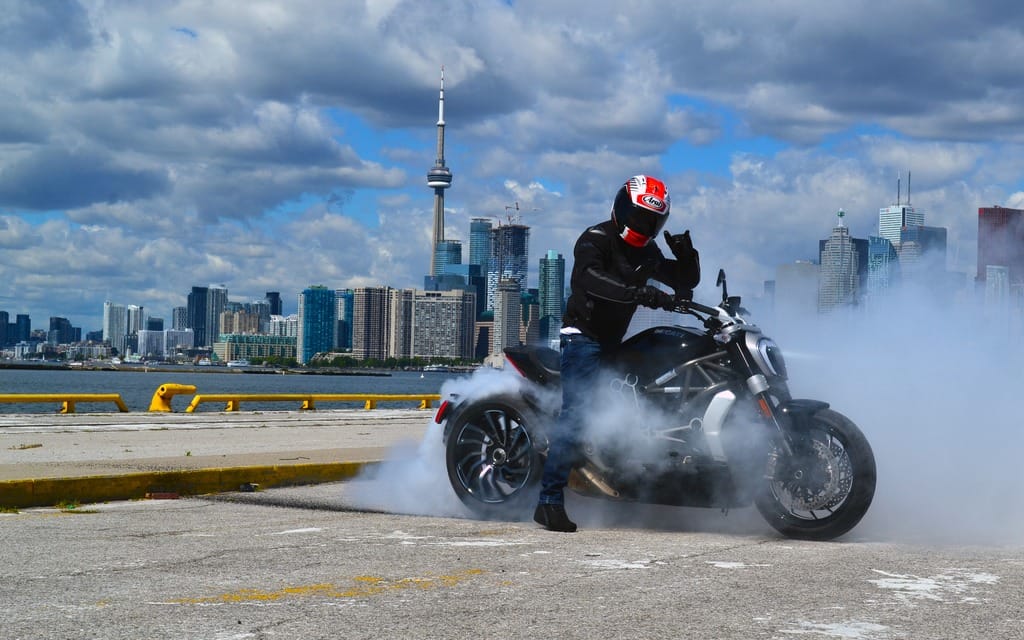 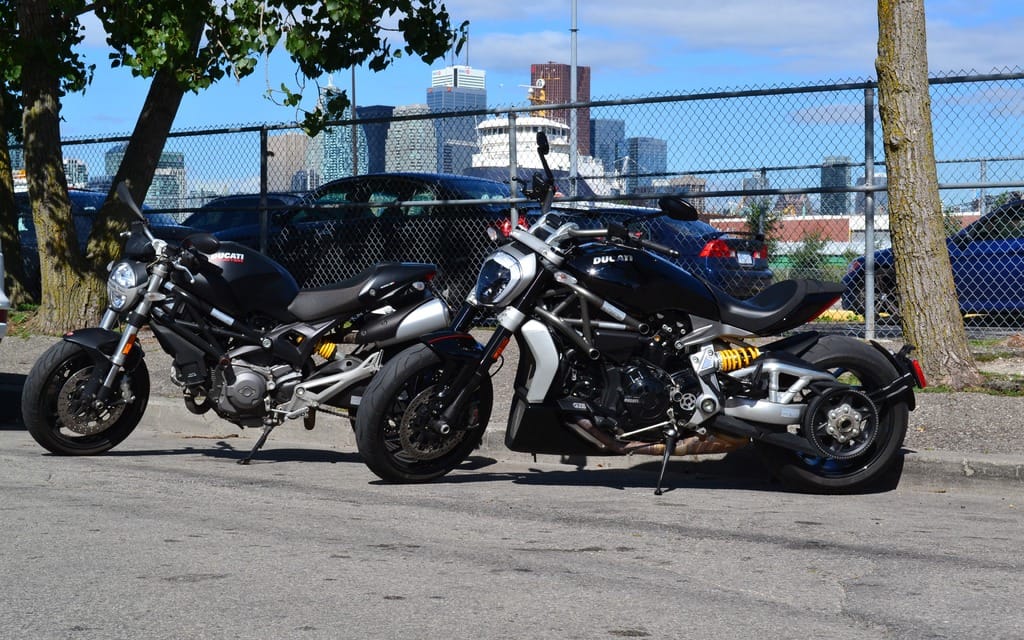 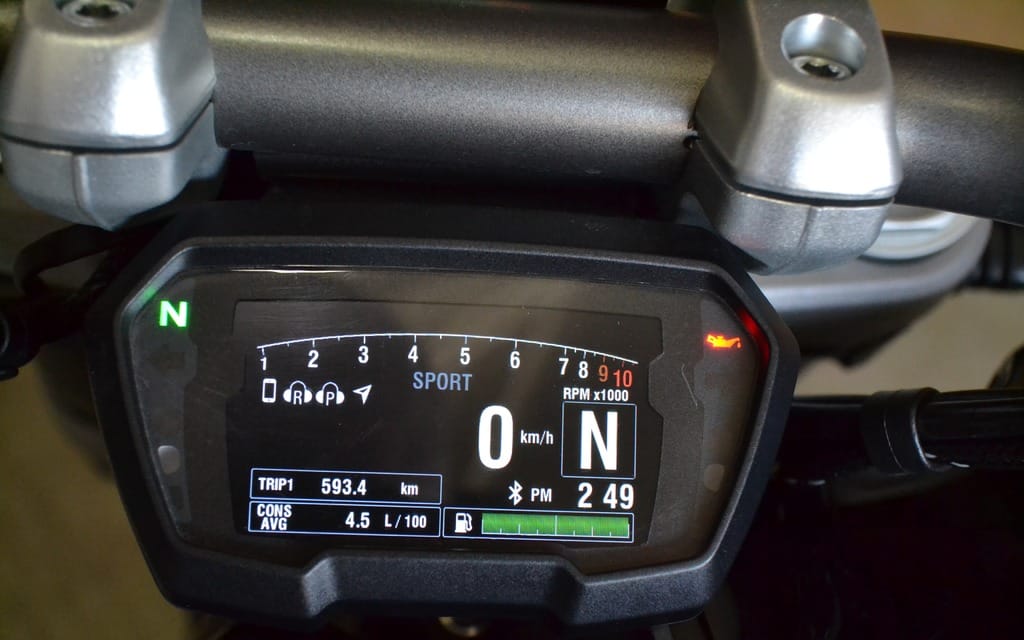 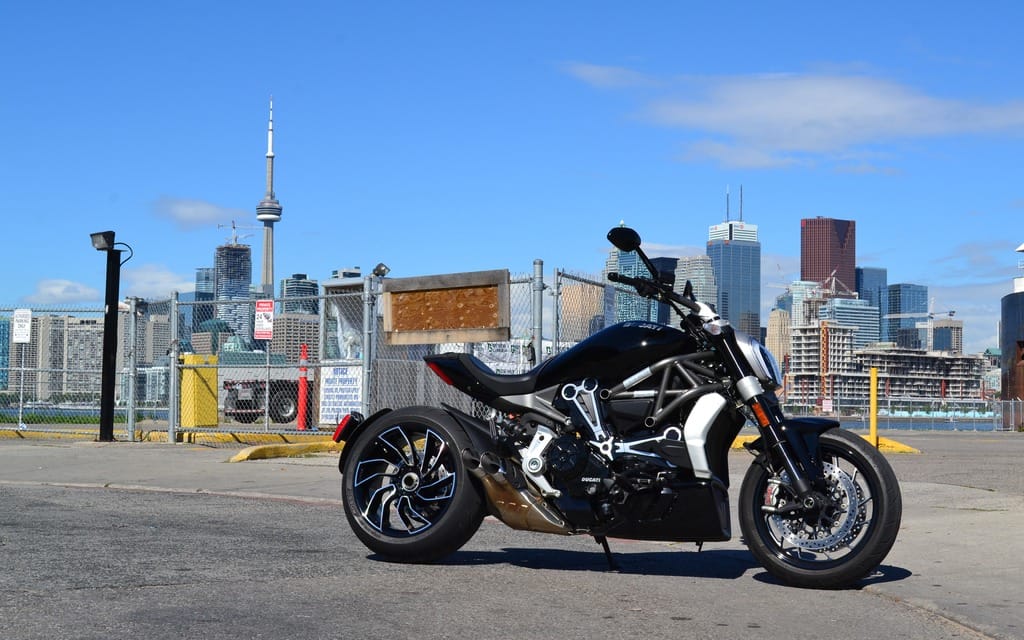 That was close. As my photographer is shooting, moving around to get the best angle, the fat 240 rear Pirelli Rosso II is heating up. I hope that my one-handed burnout will look cool but right now I have to avoid imminent doom. I reach for the left bar and squeeze the clutch lever. The tire slows. Doom recedes.

More importantly, how will the pictures look? I take the camera and shuffle through the images that Howard has just captured. I can see on the last frames that the front end of the Ducati was compressing as I went to grab the clutch lever; it was right at the point of having rear traction overcome the front grip and propelling the XDiavel S and me forward. I zoom on a picture. “Man, you learn quick! We have one here that’s just what I was wishing for!”

My new friend Howard is beaming. We met about two hours before, one of the many people that came to me since I have been riding around on the new cruiser from Bologna.

After numerous requests over the last few months from my boss and me, Nathon of Ducati sent me an email. “I will be at the last round of the CSBK, are you going to be attending? I can get you an XDiavel S for a short test.” Of course I can be there! We’ll meet on Friday morning, when he’ll fly in, and then we’ll ride to the track. That invitation I saw Monday morning was sent in the middle of the night. Sounds like a good idea that popped up in a Sturgis saloon after a few cold ones.

I meet Nathon to pick up the Ducati. I find the footpegs to be a bit too far forward so we go to GP Bikes near Toronto to get them adjusted to the rearmost of three possible positions, 22.5 millimetres closer to me. A quick adjustment that makes a big difference for my 167 cm (5’6”) frame (if you’re a tall person you may go the same distance forward from standard). The nice two-tone seat is comfortable and the handlebar bend feels quite natural with the posture. Natural as long as I don’t try to make a connection to the badges on the tank. Yes, a cruiser from Ducati. It is raked out—I sit only 755 mm from the ground—it has a belt final drive and it is fairly long on that 1615 mm wheelbase, but there is no doubt: there’s a Ducati under all this cruiser blingy-blingy. It brakes, turns, accelerates and handles in a manner that doesn’t betray its origin. It is perfectly suited to ride at a sedate pace but it’s also quite competent when the pace quickens.

The ride is a bit on the harsh side at first, too firm for the feet-forward position. I find that the rebound adjuster on the Sachs shock has been completely closed by someone, but a turn and a half out to get some compliance does not degrade the handling and provides decent bump absorption up to what the 110 mm of rear-wheel travel can cope with. In sweepers I have to maintain pressure on the bar to keep the bike leaned over, there is no way around the contact patch that moves away from the centreline of the bike with that 240 section rear tire, but it is linear and I get used to it right away. Ground clearance is very good; there are standard bikes that drag parts earlier than this cruiser does.

It may be related to the original Diavel that was released in 2011 but the XDiavel is a whole new animal. The motor is completely redesigned; new crankcases hide the coolant hoses for a much cleaner look. The Testastretta DVT 1262 cc Desmodromic L-twin is flexible, a virtue of the variable valve timing that widens the usable rev range down low. The black aluminum engine covers with machined edges on the S model stand out. Combined with the exquisite rear wheel, beautiful single-sided swingarm, slash-cut short exhaust and the stretched-out front end, the XDiavel S is a presence that turns heads.

As social creatures, we enjoy having other humans approach us with friendly attitudes. Wherever I went I found new faces that wanted to see the Bologna devil up close. That’s how I came across Howard. “Ducati? Isn’t it the Italian company that built sportbikes?” I barely noticed him coming beside me as I was moving the XDiavel S about in a quiet street, trying to do some photos. “Yes, it is. They are known for sportbikes, but now they’re making cruisers, too.” I at first thought he was on a break from work, from the shops across the street. After maybe half an hour I realized he was just hanging around. “Are you interested in helping me if you have the time?” He looked at me, puzzled. “I have the time and I can try. What do you want me to do?” “You’ve done picture before?” I could tell my request made him nervous. And I noticed something as he took his bicycle and moved it to a post; there was a bag hanging from the handlebar. Most of his belongings might be in there—I really had no idea, I had been sure he was just a worker. I instructed him on the use of the camera. He held onto it so tightly I had to pry his finger to the shutter button. “Don’t worry, with the strap around your wrist you won’t drop it.” A few dozen shots later Howard was getting comfortable as I rode back and forth in first gear, at idle. I checked the result, gave him $20, and went to find a different location. I had something on my mind. An hour later I had my spot, Howard came along on his bicycle. The devil from Bologna spewed smoke and the street photographer from Toronto I’ve just met captured the moment. I gave him a few more bucks. “Naw guy, you paid me enough already.” I insisted, he took the bill but I kept a few dollars to have lunch with.

My burrito does not satisfy me as much as if I had just given him that last $20. I walk back to the Ducati after lunch and chat with the traffic officer looking it over. I tell him about the electronic package, lean sensitive ABS, cruise control, Bluetooth connectivity and the Ducati Power Launch (DPL) launch control function. “I am a Harley rider but that Ducati is a bike I’d consider for a change. It sounds nice,” he says while straddling the XDiavel and revving it. He directs me toward the street where patrol cars get tested so I can play with that DPL button. The pavement there is too dirty for mode 1, the most aggressive of three settings, but I find some grippy tarmac elsewhere. I hold the DLC button for two seconds, then follow the instructions on the dash. Pull the clutch, engage first gear, hold full throttle. The display then switches to Ready to launch. I release the clutch lever and go. The revs climb to 10 grand and I have to trust the wheelie and traction control. The XDiavel shoots forward and it’s time to shift into second gear before my mind can catch up on that first run. I think I have just sold my soul.