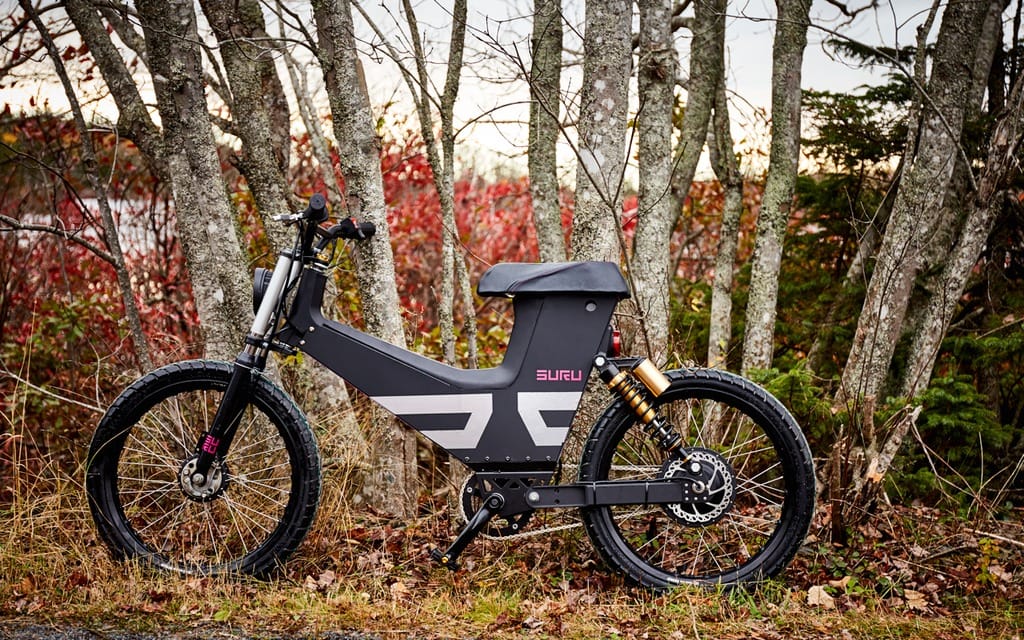 Zapped: From Amarok to Suru

Michael Uhlarik’s Amarok electric superbike was a project filled with potential, but it did not work out. So what’s he doing now? Building mopeds, of course.

When a 2013 track test of the Amarok went bad, Uhlarik was crushed. “I went into suspended animation with regard to the Amarok project,” he says. “I tuned out.”

But a year ago, right around Halloween, he says, “I started getting thoughtful about that project, wondering what might be the best outcome. What did it deliver?”

“What stood out,” he says, “was the monocoque frame, the way we manufactured the frame, making the shell of the battery (be) the shell of the motorcycle. So I thought, what else can I apply that technology to?” Around that time he read an article in Bloomberg “about the hugely expanding electric bicycle market.” The ebike, he learned, “is the fastest-growing vehicle market in the world, period.” Sales of 60 million ebikes last year and there will be more this year. So you’ll pardon us if we say that a lightbulb turned on for Uhlarik. He got so excited that over the weekend he sketched out a frame design and principal layout, “what you would have called a blueprint in the old days,” for an electric bike that would use his monocoque frame and real motorcycle components. Unlike most ebikes sold today, it would be a true moped, not an overstressed bicycle with a motor or an overweight scooter with pedals.

While he was building the Amarok, Uhlarik spent too much time scratching for dollars—it was not an attractive investment. But an electric moped? With that ravenous world market, it’s a licence to print cheques. Which is what investors have done, and now he’s ready to start manufacturing the Suru.

Suru. He named the project by assembling the initials of his daughters. And it was a good working name, too, but his investors liked it, and it stuck. He’ll launch the Suru in January, probably in Toronto, and he says the first 100 units will be manufactured right away, using techniques and lessons from the Amarok superbike project. More bikes will be made in the spring. The Suru will be sold through a website, but eventually, he hopes to open dedicated stores in Halifax, because it’s built there, plus Montreal, Toronto and Vancouver.

What it is: a moped, legally restricted to 32 km/h, built with motorcycle parts and powered by a battery, though you can pedal-power it if you want to. “Think of the Honda Cub,” he says, “very small, narrow, easy-on, easy-off, lightweight, but replace the smoking 40 cc two-stroke with a silent, clean, electric motor.” The Suru has that monocoque frame, is fully suspended with a motorcycle fork and dual adjustable rear shocks, rides on 17-inch, DOT-certified motorcycle wheels, and weighs 50 pounds, or 23 kilograms. It’ll go 50 km on a charge and will fully recharge in three hours from any outlet. The battery compartment is lockable and the battery can be taken out for recharging in your apartment or office. And the sales price, he says, will be less than that of most competing products.

“The whole design philosophy of Suru is trust. We have DOT=certified wheels and brakes and tires. Parts are designed for a vehicle that weights four times as much as Suru and travels 100 km/h. It’s Honda cub reliability in a lightweight, low cost, urban electric vehicle.”

The Suru will be made in Canada, in Halifax, Nova Scotia. And it will carry a lifetime guarantee, he says. “I want people to understand that Suru is made in Canada, and you can trust it.”