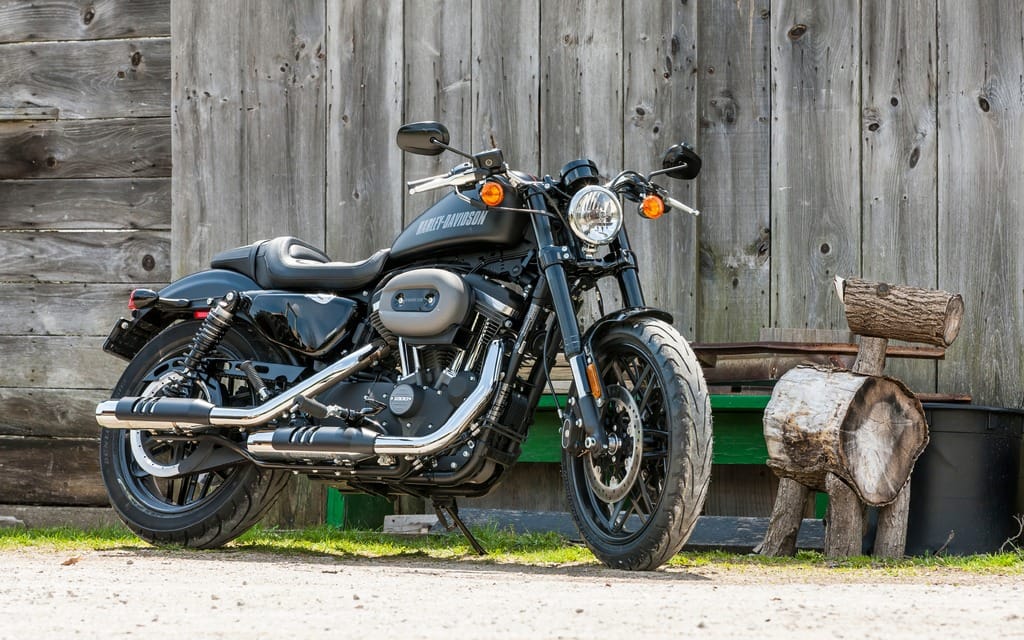 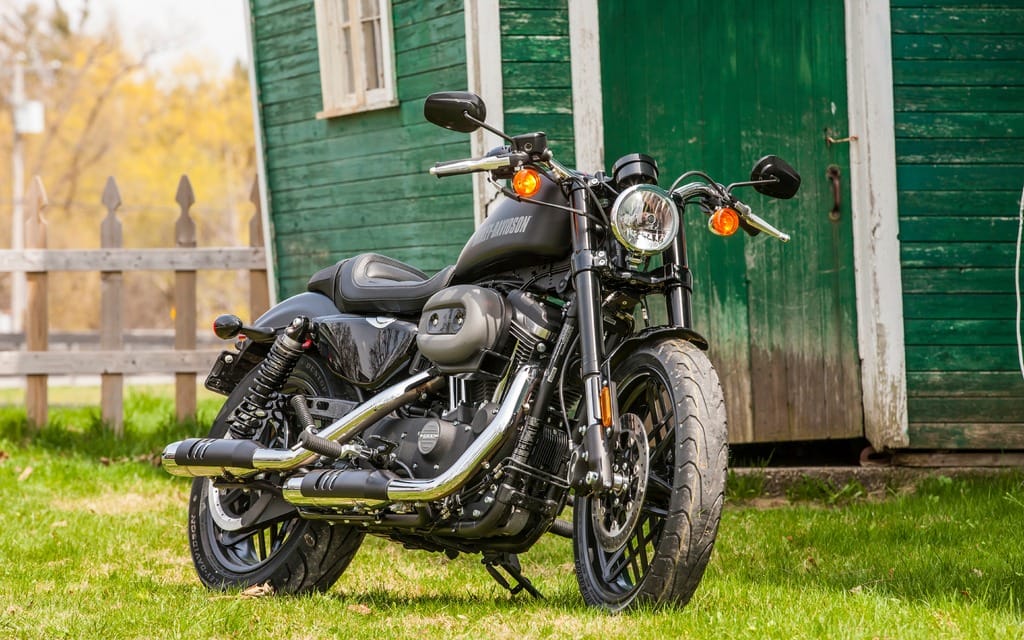 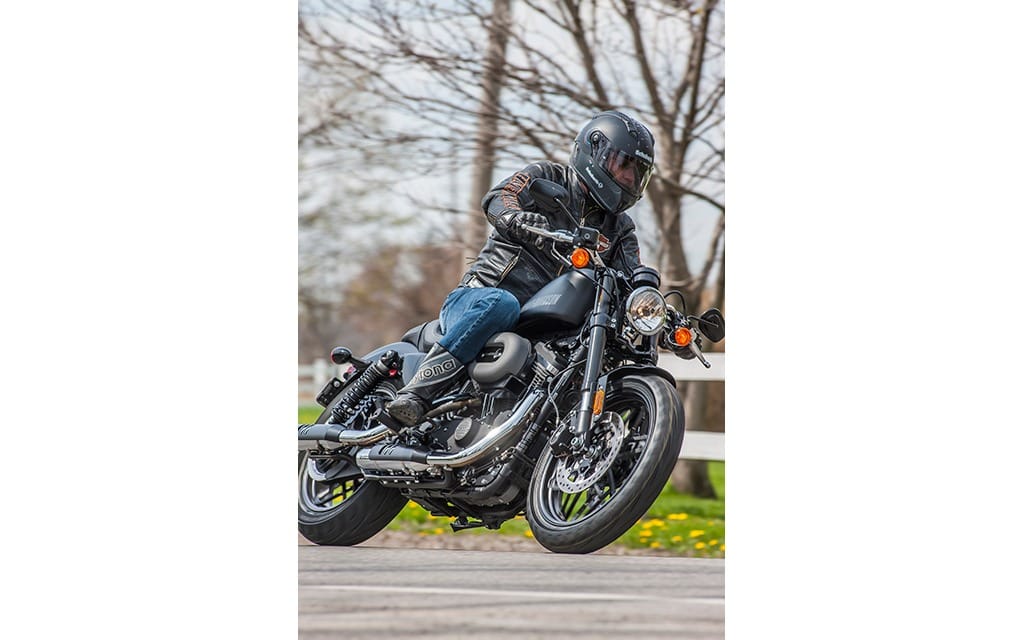 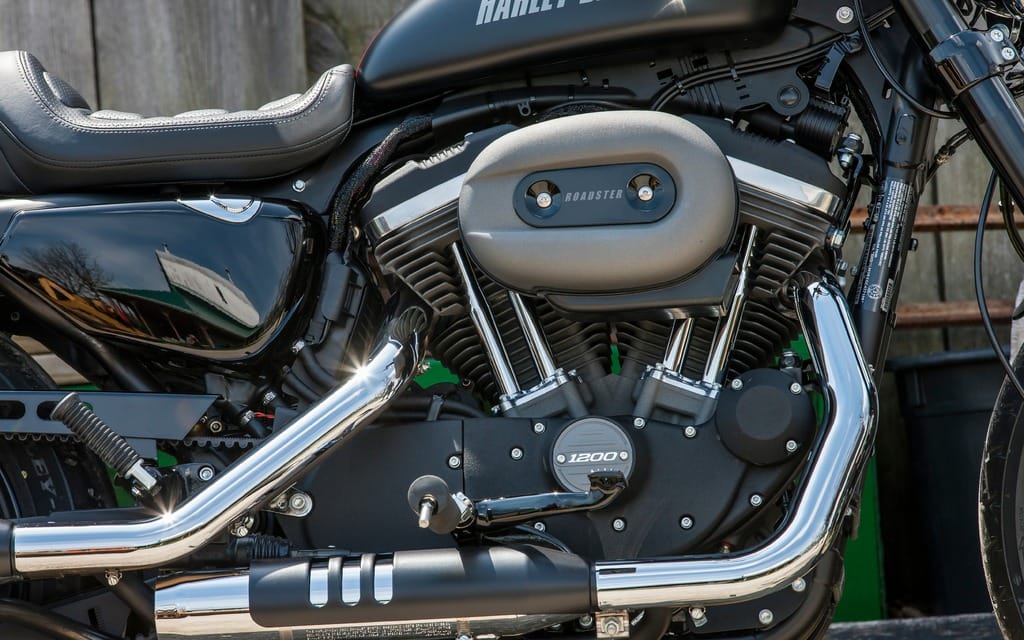 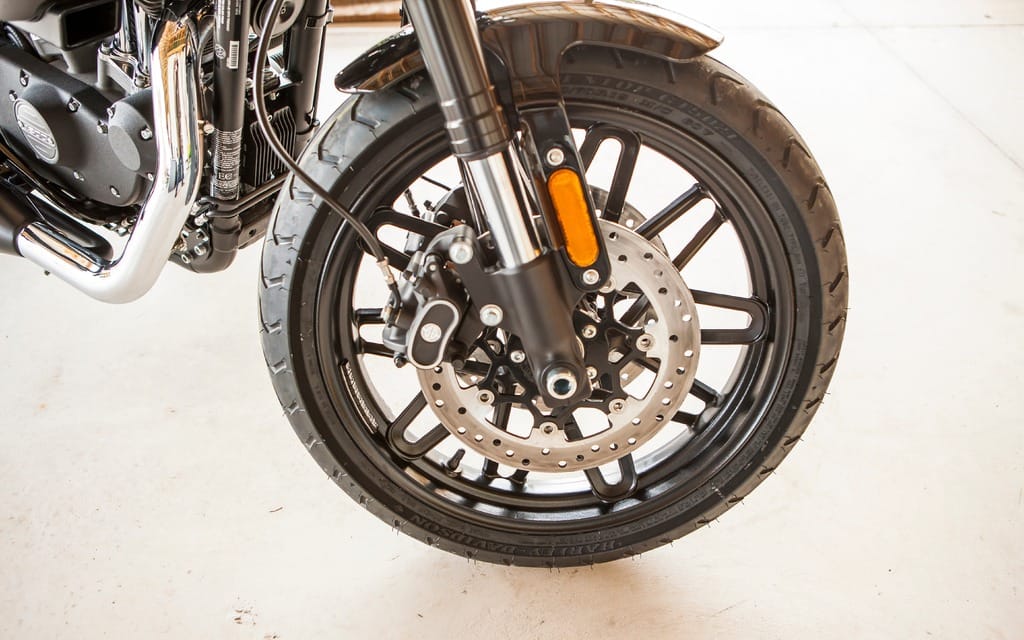 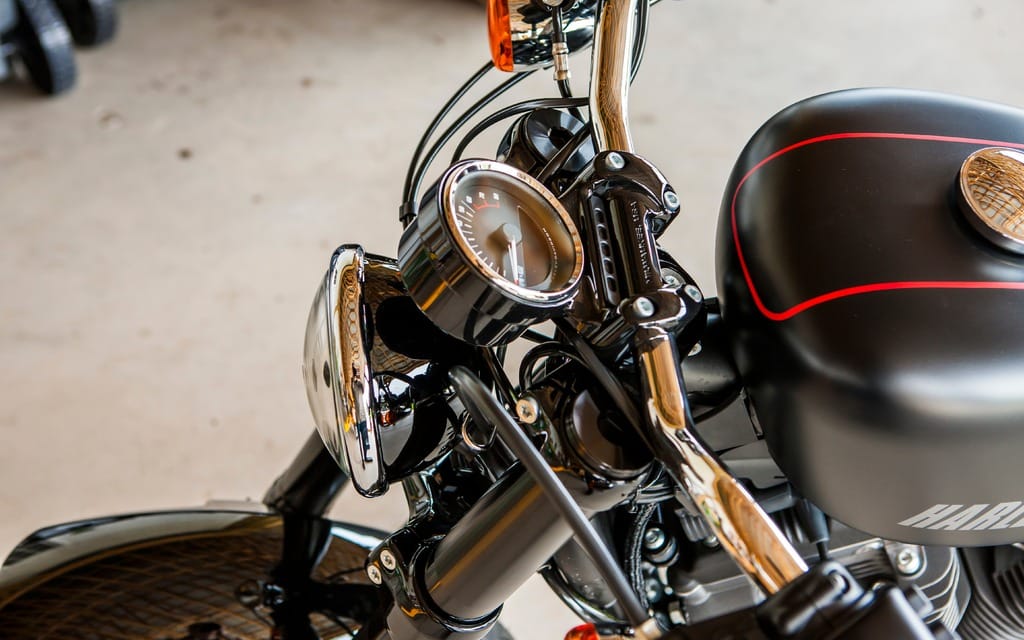 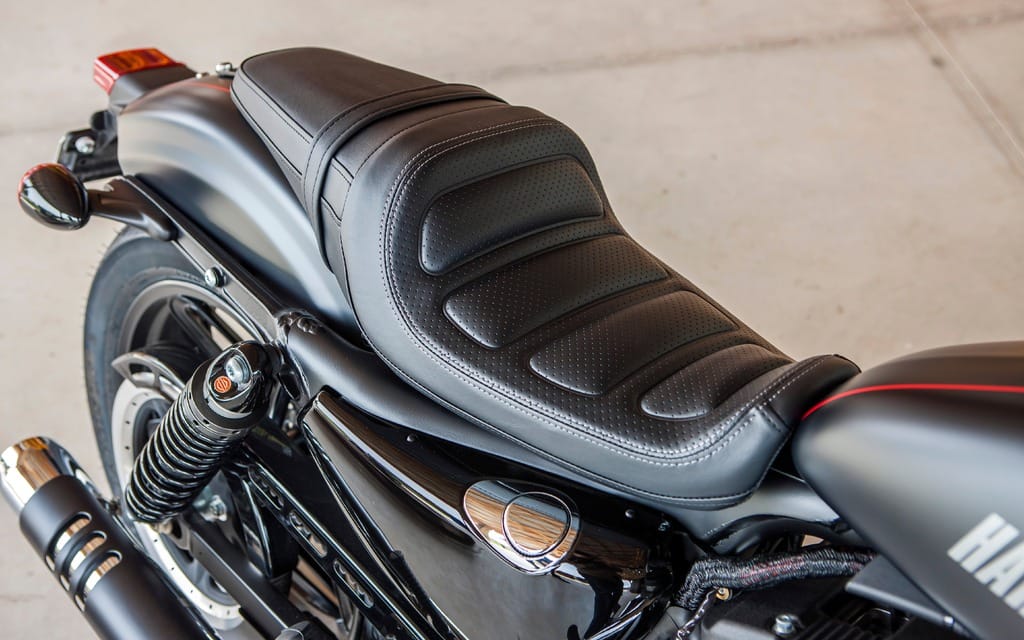 The Motor Co. invents a Sportster that sports
Harley-Davidson calls its new Roadster a “mash-up,” a comingling of “styling genres” to be exact. One part Dark Custom (there’s barely a glisten of chrome), one part retro-rod (Harley evokes memories of its mid-’50s KHR racer, though I see more 1958 XLCH) with just enough modern sporting hardware for a soupçon of backroad bona fides, the Roadster would seem to be — along with the recently released Low Rider S — a bold move by The Motor Company into the performance cruiser market.

More importantly, though, it’s yet more proof Harley is keenly aware of the styling trends affecting its brand long before they hit the public eye. While other motorcycle manufacturers wait until a styling motif blossoms into a full-blown trend, Harley susses them out at the ground — or maybe we should say café — level. The Motor Company may be the hoariest of traditional motorcycle manufacturers but it is adamant about reinventing its clientele.

So, what we have is one basic cruiser — the Sportster — upgraded with rear dampers that, well, really dampen, plus a set of inverted forks that look like they got lost on the way to a GSX-R. Throw in some café racer handlebars, a bobbed fender or two and enough matte paint to finish a Stealth fighter and you have the production version of what a new breed of speed shops — think Speed Merchant’s Mulato, Deus Ex Machina’s Bald Terrier, etc. — have been quietly customizing for the last few years.

But is it actually sporty?

By Harley/cruiser standards, absolutely. Like the Low Rider S, the Roadster gains a set of tri-rate gas emulsion shocks. Not a huge leap forward for motorcycling, but a major advancement for the Sportster, especially since they come with a 20-millimetre increase in travel. That’s not a gain to be diminished; when you’re starting with the stock Sportster’s paltry 65 mm, a boost to 85 mm is very much appreciated.

Also, like the Low Rider S, the Roadster gains a semi-modern cartridge front fork. I say semi-modern because, again like the Low Rider S, only one leg has actual damping hardware, the other empty save for springs. Nonetheless, it’s a 43-mm “inverted” affair, just like the latest superbikes and, to complement the sporty intent, Harley has imbued said fork with some seriously beefy triple clamps. You have to admire the designers’ ambition, though, again, like the Low Rider S, the Roadster is somewhat limited in the ground clearance department — 31.1 degrees on the left and 30.8-muffler-grinding degrees to the right.

That said, when was the last time you trail-braked a Sportster deep into a hairpin? Or pushed one hard enough through a high-speed sweeper to seriously tax traction? The Roadster will do both with aplomb. Thanks to a steeper rake, turn-in is more precise than that of other Sportsters, though still requiring a firm hand. Once leaned over, however, the Roadster will hold its line come rut or pothole and will run out of ground clearance long before the sporty-profiled Dunlop GT502s (120/70R19 out front, 150/70R18 in the rear) run out of traction. It won’t challenge sport bikes — or even the sportiest of adventure tourers — for backroad prowess, but neither will a Roadster be automatically left behind on a typical mountain run. Many are the cruisers not nearly as adept at strafing a switchback.

This upping of the performance quotient is equally apparent in the braking department. The front calipers may only be two-piston affairs but they grip (relatively) huge 300-mm discs. And not only are they substantial, but said rotors are also floating. No, hell hasn’t frozen over. Yes, those are floating discs on a basic Sportster. Braking power is unsurprisingly prodigious, no “relatively” qualifier needed. Bite is immediate, lever effort moderate and the sheer stopping grip from those sticky Dunlops impressive: on a dry road it was difficult to get the ABS system to kick in. Indeed, the only negative surrounding the brakes is that — and this according to Cycle Canada photographer extraordinaire Bill Petro, so I will take his artistic pronouncement to heart — the big discs prevent prominent display of one of the Roadster’s most attractive features, the new Offset-Split 5-Spoke wheels. Patterned, says Harley, after traditional laced rims, the new wheels are not only lighter but look like, well, the spoked wheels Harley designers were trying to emulate. Pictures don’t do them justice; they’re far more impressive in the metal.

Unlike the chassis, the engine — the Sportster’s traditional 1,202-cc 45-degree V-twin — remains largely unchanged, though, in this rubber-mounted guise, it feels smoother than previous renditions. Indeed, though it will shake like a paint mixer from idle up to about 2,000 rpm, it’s glass smooth at 3,500 to 4,000 rpm, the handlebars and foot pegs remarkably vibe-free for something so inherently unbalanced. Give credit to Harley’s rubber mounting, the Roadster is sport-touring comfortable to 145 km/h and beyond.

It is, no surprise here, hardly a powerhouse. The fuel injection is spotlessly precise and throttle response is excellent. But it is still, after all, a twin lacking both overhead cams and multiple-valve heads. Low-end torque is generous — 76 pounds-feet at 3,750 rpm, says Harley — but the party’s over by 5,500 rpm, at which time the Roadster is putting a touch over 60 (claimed) ponies to the rear wheel. What was once dominant is now middling. The one salvation is that, again unsurprisingly, there are all manner of performance upgrades available, Screamin’ Eagle’s Stage IV Sportster engine kit promising a boost to a seriously rorty 90 rear-wheel hp. No, you really shouldn’t have to buy performance upgrades at this price (the Roadster will start at $12,999), but, for once, the chassis is willing, so open pipe away.

The Roadster’s limitations are mostly seen in its seating position, an attribute that will literally separate the boys from the men. Or, more accurately, those with lower lumbars yet to suffer the ministrations of a chiropractor from those who have become all-too-familiar with lower back pain. The problem isn’t the seat — it’s surprisingly comfy considering its diminutive size — or the sport-touring-oriented low-rise handlebar, but that both have been combined with the Sportster’s traditional feet-forward foot pegs. The combination of a sportbike’s upper riding position with the cruiser foot peg location will not be easy on aging spines. It’s not nearly as debilitating as the V-Rod’s torturous seat-peg-handlebar relationship but, were I buying a Roadster, the first order of business would to find some way to rear-set the foot pegs.

But I’m not the clientele. Neither, in fact, are most Cycle Canada readers. You’re too old. But those bearded hipsters we all love to hate? Their tattooed Goth cousins? They’re going to absolutely freaking love the thing.

The making of an icon
Sportster harkens back to a monumental model
It’s easy to forget, what with lumbering Electra Glides and plush Road Kings, that Harley-Davidson was once the performance company and that the bike we now think of as The Motor Company’s entry-level model — the Sportster — was once the baddest bike on the block. Indeed, pre-Sportster, Harley had been getting its butt kicked in a pre-Beatles British invasion, Old Blighty’s lighter — and, more importantly, overhead valve — parallel twins rendering Milwaukee’s overweight and flathead W and K models portly and slow.

Enter the Sportster: Its 883 cubic centimetres — now barely mid-displacement for a cruiser — was considered mighty for the day, especially with the addition of overhead valves and what was, for Harley in the day, the radical concept of increasing the bore and reducing the stroke to let the big twin breathe easier at high rpm. More importantly, the designers didn’t rest on their laurels. One year after the 1957 introduction of the XL came what would become the iconic Sportster, the XLCH.

Essentially, the XLCH was a KHR racer upgraded to the new, more modern overhead valve engine. Besides a massive increase in compression ratio, the “Competition Hot” XL had bobbed fenders, was stripped of electrics, had no lights and, as the precursor for all classic Sportsters to come, Harley’s soon-to-be-classic “peanut”-style gas tank and the now-iconic dual “staggered” exhaust pipes (straight-through muffler-less jobbies from the factory, no less).

Although it was soon civilized with lights and mufflers and eventually became Harley’s most popular Sportster — from a mere 239 units in 1958 to a whopping 21,000 in 1967 — it is memories of that original XLCH that Milwaukee is trying to evoke with its new Roadster. Its displacement advantage may be long gone and a 45-degree overhead valve V-twin is no longer the power commander it once was, but there’s a clear line between the 1958 Sportster (and the many customs it engendered) and this latest hot rod from Harley.