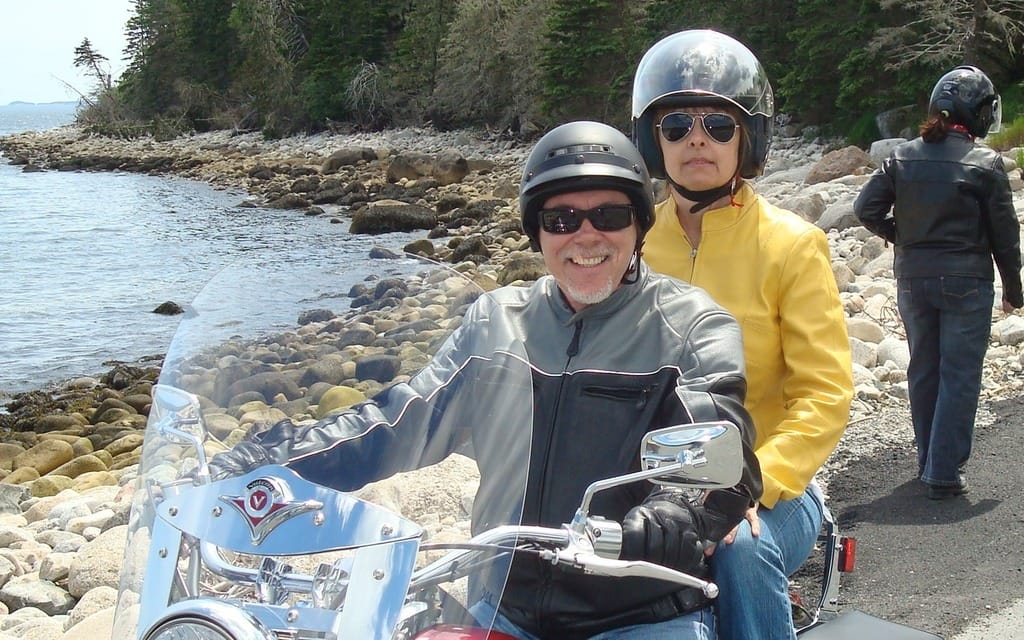 When I was 16, with a part-time job in Woolco’s hardware department secured, my dad agreed to co-sign for my own credit card (the interest rate at the time was about 20 percent, if I recall correctly). My first purchase was a 1971 Honda CB175 with a gas tank finished in a beautiful solid blue. Naturally, I called her Blue.

The last year of high school meant finding a prom date. Her name was Heather, and though we didn’t go to the prom as a couple — or on my motorcycle — we attended prom together with a group of friends. She would eventually end up on the back of that CB175.

I don’t remember if Heather was the first girlfriend on the back of my bike, but I do remember with crystal clarity what her dad said the first time I arrived on it to pick her up. “Better hold on tight,” he told her. And she did. Often. That alone made the interest payments worth every penny.

Heather and her family moved to Halifax before she entered high school, but her family had a modest vacation home on the south shore of Nova Scotia in a tiny community called Broad Cove. Summers seemed long in those days. With working to make payments on my bike and Heather a two-hour drive away, it meant putting lots of mileage on the bike’s odometer if we were to spend any time together. Getting to Broad Cove was quite a task as Blue, at only 175 cc, didn’t handle highway speeds well — not, at least, for much more than 30-minute stretches. After that I’d have to stop to let her cool down to prevent the sparkplug from misfiring. But she always got me there. Getting home wasn’t always so easy.

I’d never spent much time riding in the rain, always opting for my mother’s bright orange Mini as a more prudent alternative. But when you’re 200 km from home, trading vehicles isn’t an option. When the rain started to fall heavily one Sunday I considered the journey home with dread. Heather was worried for my safety, and she and her family drove ahead of me so I had some lights to follow as the sky was so dark, and the rain falling so hard on my visor, that I could hardly see more than a few yards in front of me. I was soaked to the bone, miserable, cold, and couldn’t wait to take a hot shower when I got home. The only thing that kept me going was seeing Heather peering out the car’s back window and waving at me. (The rain keeping Blue cool enough that I didn’t need to stop to prevent overheating didn’t hurt either.)

Heather and I got married three years later. I sold the CB175 and purchased a 1975 Yamaha DT250 Enduro, which served me well commuting to work — until it was stolen. I was without theft insurance and my riding days came to a close. Heather and I began a family and settled into a happy routine. Fast forward 35 years and you’d find us sitting on the front deck drinking coffee while watching a blazing red sunset. The faint, familiar rumble of a motorcycle broke the evening stillness. “I wouldn’t mind riding again,” I remarked casually as the rider made his way past and up the street.

I was driving home from work a few weeks later when my phone rang. It was Heather. She doesn’t often call when I’m driving, so I assumed it was important. I answered through Bluetooth. “Hey sweetheart, what’s up?” “There’s a motorcycle shop having a clearance sale on last year’s models tomorrow. Want to go take a look?” I almost drove off the road! Was she serious, or was this some kind of joke? Happily, she was serious. We shopped around and settled on a Kawasaki Vulcan 500 to get us back in the saddle, but quickly outgrew it. We now ride a Vulcan 900 Classic LT — and she still holds on tight.