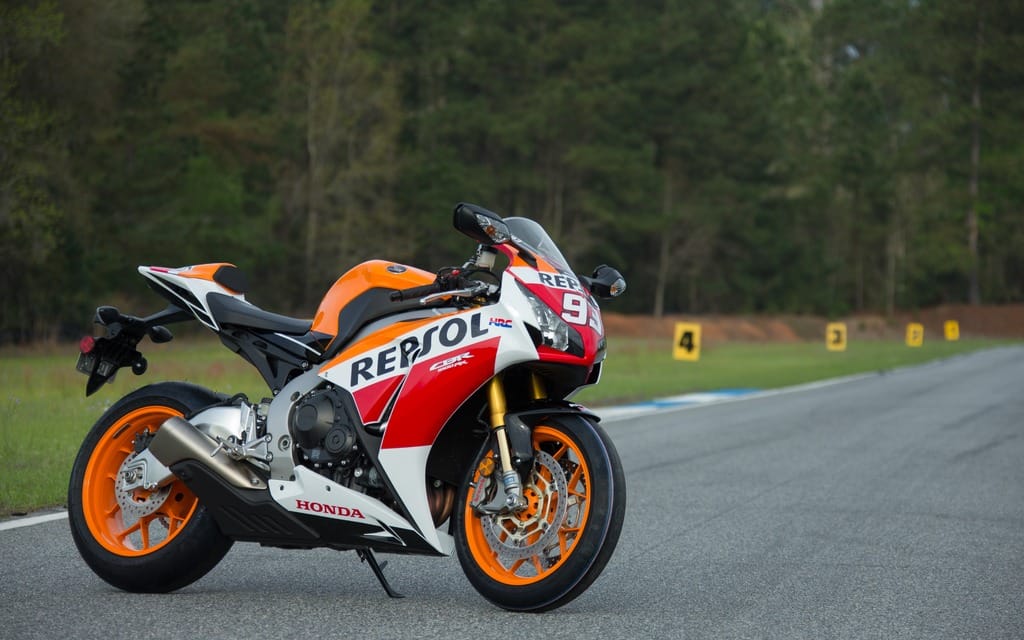 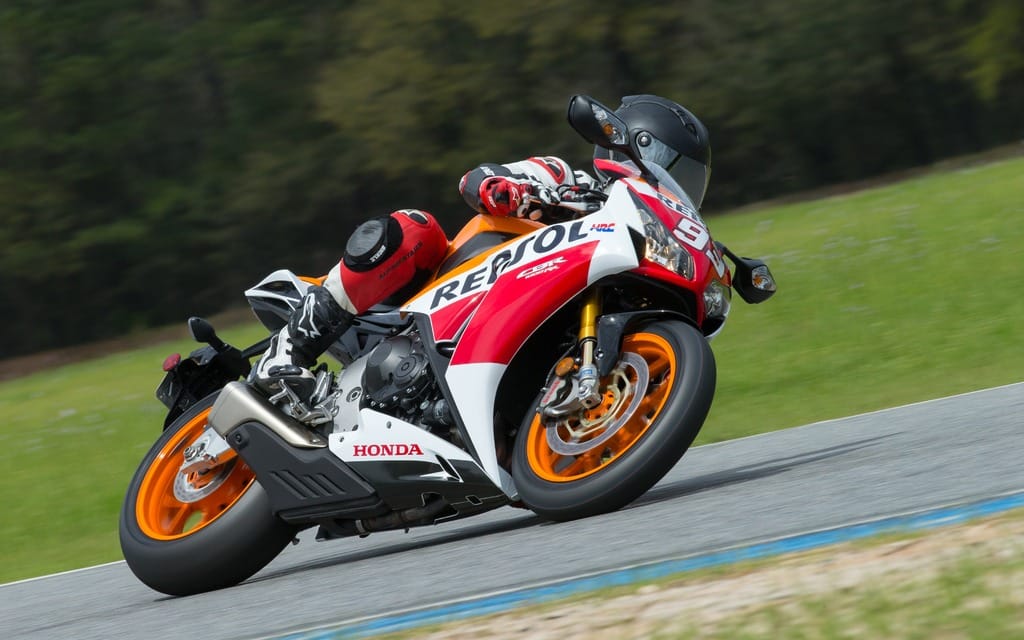 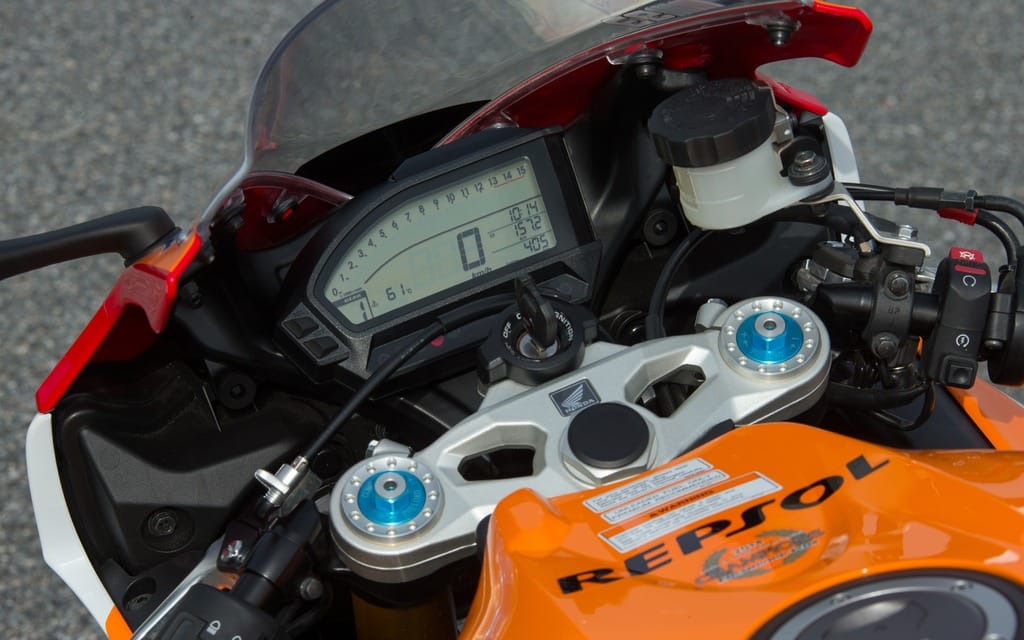 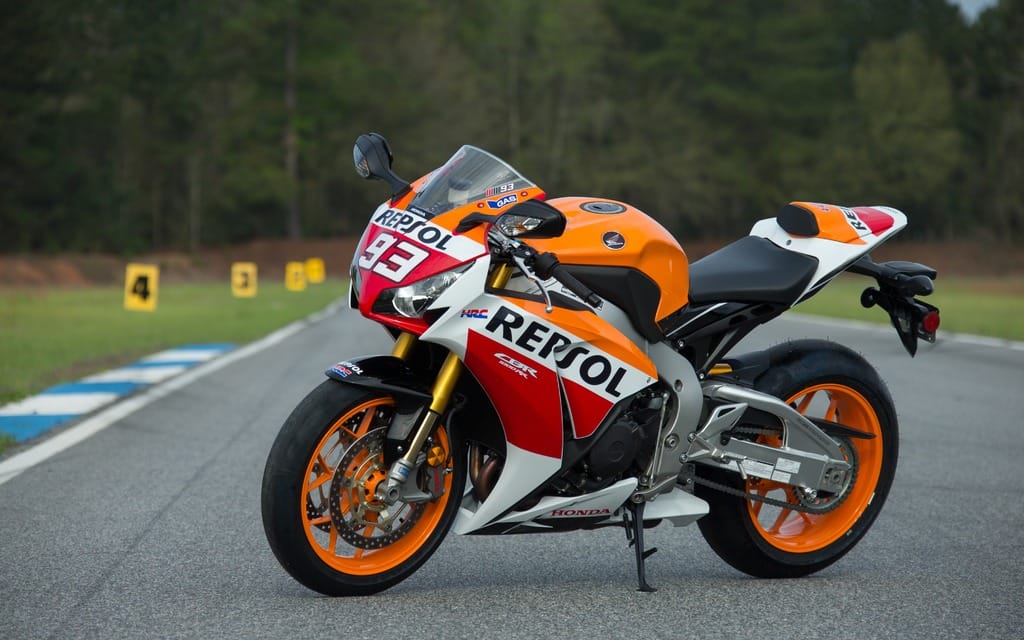 The CBR1000RR has long been the wallflower of superbikes. The SP suffix brings a welcome boost of self-assurance

Honda remembers a time when the world was simpler. Success as a company was assured if the products you made were superior to other products in the marketplace. Other motorcycles broke. Yours didn’t. End of story. But that’s changed.

Other motorcycles are pretty good now. Even brands from countries on the verge of defaulting from the Euro zone make bikes more than durable enough for Canadian riders and our truncated riding season. And something else has changed. Consumers want a romantic brand story. And it doesn’t even have to be true.

You know those Hollister hoodies that you see the hip kids wearing? Well, Hollister, a brand owned by retailer Abercrombie & Fitch, is named after Hollister, California, a depressed little town an hour inland from San Francisco. The town is primarily agricultural and has a thriving heroin and meth drug trade, like a real-life Breaking Bad. Hollister is also the town that, in 1947, became famous because of a riot by motorcyclists. Marlon Brando starred in the movie version of the event, “The Wild One.” Neither drugs nor motorcycle riots are brand-affirming events for A&F and its Hollister brand.

Honda doesn’t need to hoodwink motorcycle enthusiasts with half-baked brand histories. They have an actual history that’s worth touting. But they’ve been reluctant to tout it. Until now. The number 93 on this CBR1000RR SP is the number of MotoGP sensation Marc Marquez. Last season was a bit of a bust, but he’s won the two previous titles. His MotoGP bike has nothing to do with this CBR1000RR SP; in fact there’s a good likelihood that he’s never ridden one. But that’s a minor point. (The Repsol livery, by the way, if you don’t follow these things, is the name of Honda’s main MotoGP sponsor. Repsol is a Spanish petroleum company, and Marquez is Spanish. So is his teammate, Dani Pedrosa. Motorcycle racing is very important to the Spanish. We, in Canada — indeed in North America — do not place much importance on motorcycle racing.)

It has been standard practice for the manufacturers of sportbikes to make an up-spec version of the base machine and to festoon it with Öhlins suspension and Brembo brakes. Honda, I think, has believed this approach frivolous. The Showa fork and shock on its standard machine are perfectly fine, and, if you must know the truth, the Öhlins fork that appears on production motorcycles is not the Öhlins fork that you would actually buy from Öhlins. The cynical call these production-bike Öhlins bits Shöwlins, because they’re most effective when you’re showing off to your mates in the cöffee shop parking löt. It’s a little like buying Calvin Klein from an outlet mall only to learn later that fashion retailers make a line specifically to stock outlet malls.

But there is plenty of substance to delineate the $19,999 CBR1000RR SP from the $4,000 cheaper base machine. Inside the engine, the intake and exhaust ports are polished and the cylinder head is gas-flowed to ensure efficiency. Additionally, Honda has made the Italianesque claim that engine parts are “hand selected,” as one would, I presume, hand select a tomato from the vine before sautéing it with garlic for a sauce. There is also a spiffy top triple clamp and an Öhlins TTX shock that matches the fork in its lustrous finish. A revised subframe knocks a claimed 11 kg off the base bike’s weight (claimed overall weight, fully fuelled, is quoted at 200 kg). Radial mount Brembo monobloc calipers dispense with the Nissin items that the base bike makes do with, and antilock brakes are stock.

The virtues and vices of the base CBR1000RR remain in this SP version. A slipper clutch prevents the rear wheel from locking up during spirited corner entry, and the bike is as well balanced and compliant as any litre-bike has a right to be. And there is still no traction control, which, given that we are in the year of Our Lord 2015, is a head scratcher. Next year, when Suzuki releases its new GSX-R, Honda will be the only Japanese brand without some form of traction control on its top-of-the-line sport bike. (European sport bikes have had traction control for many years.)

The disconnect in how sport bikes are marketed and then eventually used by the buyer is profound. Very few find their way to a track, and yet they’re launched to the press on tracks and buyers bask in the glow of their steed’s racetrack successes. And, on the track, traction control is indispensible once a certain speed threshold is passed. On the street it’s useful, though the inclusion of antilock brakes is far more significant. And while the CBR1000RR SP is touted as a track-ready machine, a relatively small number of racers will choose the Honda. But on the street the Honda is perhaps the best of the litre bikes, as it has flawless fuelling, a stout midrange (it gives away 30 peak horsepower — or more — to a bike like the BMW S1000RR, but its midrange is better than nearly any other superbike).

On the track I prefer Honda’s CBR600RR, as it’s a machine of almost telepathic capability. But on the street I like the CBR1000RR, and, since riding on the street on a machine that’s grossly overpowered — as all superbikes are — is less about ultimate performance than it is about owning a bike that makes you feel good, then the SP variant finally adds what the Honda’s been long missing: a little bit of exclusivity to go along with its profound capability.