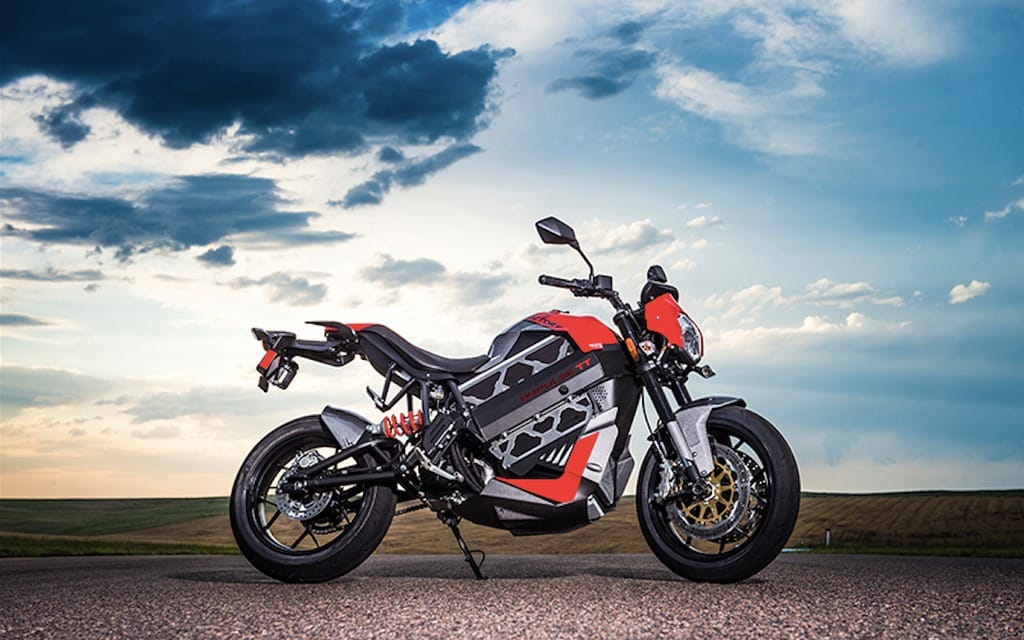 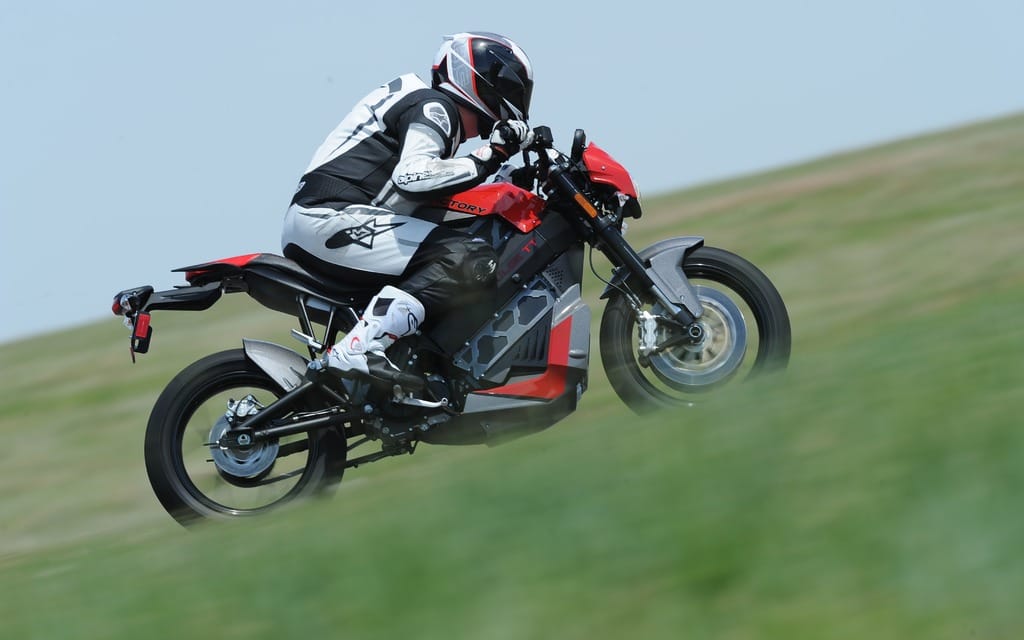 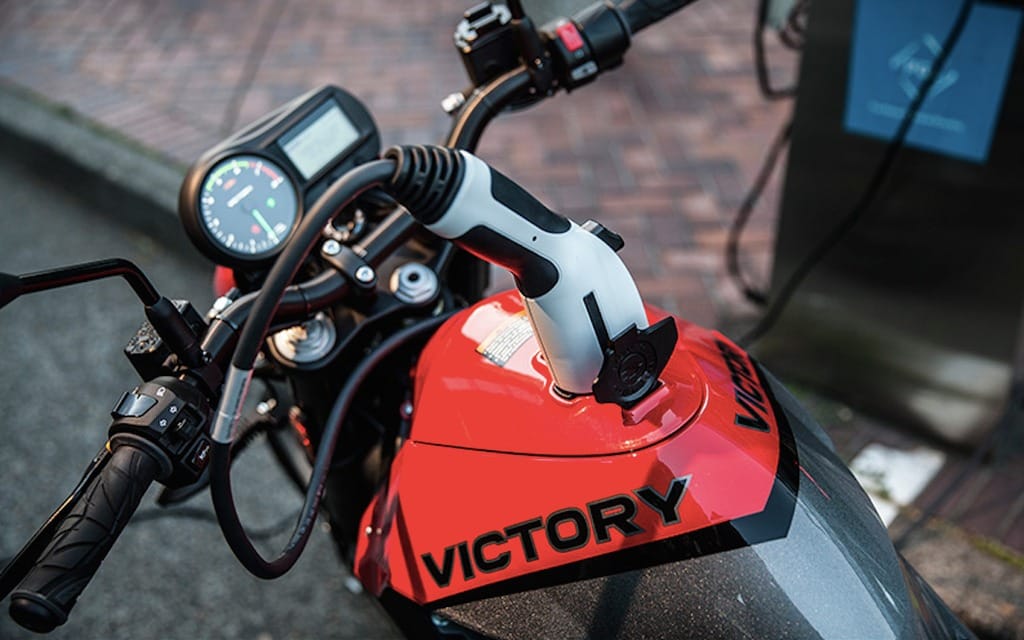 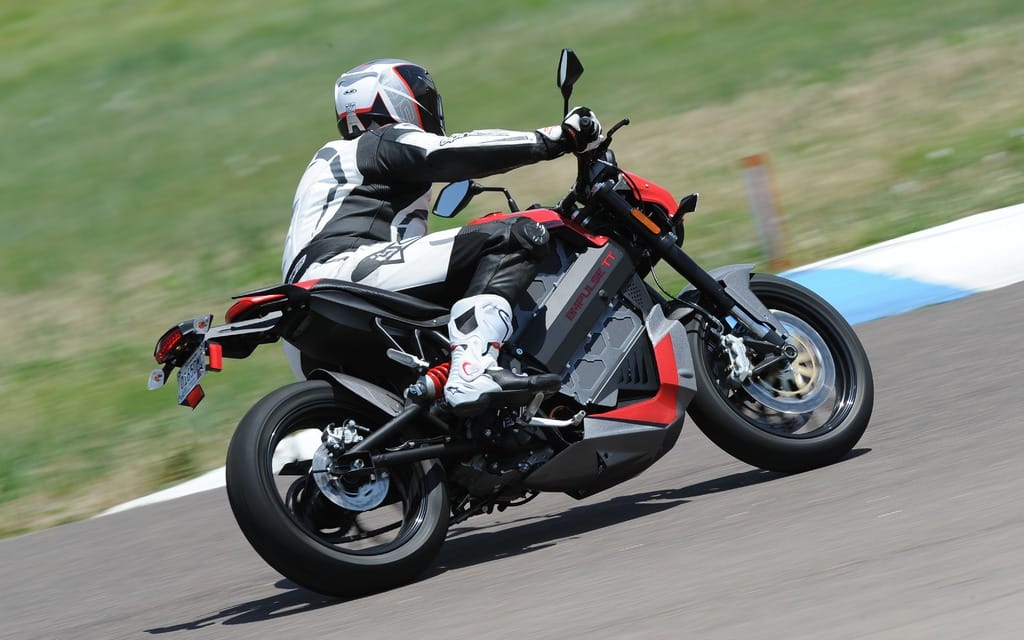 Victory jolts ahead while Harley drags its heels

In June of 2014 Harley surprised with the unveiling of Project LiveWire, its first-ever electric motorcycle. While the LiveWire isn’t yet in production (it’s currently being paraded about on a rock band–like tour to gather feedback), it appears the bike will make its way into dealerships in due course. How was Victory, the brand-in-the-shadow, going to counter?

Papa Polaris answered with the purchase of Brammo’s motorcycle-specific assets (Brammo still exists as an independent producer of electric powertrains) last January, but what was the end game? The answer is the Victory Empulse TT electric motorcycle. Obviously it’s an all-new entrant for Victory, but at the same time it’s an evolution of the Brammo Empulse platform — though Victory emphasizes that this isn’t simply a rebranded Brammo (the Victory version receives a new dash, bodywork, cast aluminum rims, and battery). Since distinguishing itself from the defunct brand (Brammo motorcycles is no more) is paramount, it prompts the question: why carry over the Empulse name? “We wanted to pay homage to the history of Brammo,” says Josh Katt, Victory’s electric product manager. (The powertrain will still be branded Brammo, and Brammo will continue to make the motor and battery for the time being, though production is moving from Oregon to the Polaris compound in Spirit Lake, Iowa.)

Paying homage is well and good, but Victory engineers also wanted to improve the design. Claimed peak output (54 hp, 61 lb-ft of torque) from the Empulse TT’s water-cooled internal permanent magnet AC induction motor is comparable to the mothballed Brammo Empulse R, and the TT still feeds power to the rear wheel through a six-speed transmission and chain drive, but gains have been made in battery performance (power up 10 percent vs. the previous generation, Victory says). The Brammo Power lithium ion battery has a capacity of 10.4 kW hours and voltage of 103.6 volts (117.6 volts max), and comes with a five-year warranty. Battery charge time from completely dead to 100 percent is eight hours via standard household socket, though the time drops significantly — to just two hours — when charging a battery with at least a 20 percent charge. If charging from a 220/240-volt supply (“the type found at most charging stations [which are few for now, but increasing in number] and easily installed in most homes for a few hundred dollars,” a CAA website states), the Empulse TT can go from no juice to fully juiced in 3.5 hours.

Colorado’s secluded High Plains Raceway provides the perfect venue for keeping the top secret Empulse TT away from prying eyes during an embargoed test ride. The 4.1-kilometre track climbs and cascades through the countryside with some tight, technical sections that test the bike’s handling limits. However, despite marketing material touting the TT as a “street legal electric race motorcycle,” this simply isn’t a race bike. Why launch it at a track? “We wanted these motorcycles to be tested in the most extreme environment imaginable,” says Victory’s Robert Pandya.

As this is my first ride on an electric motorcycle, the day’s initial session is spent feeling out the machine and track — and adjusting to the eeriness of wind drowning out any hint of engine noise. But the alien sensation of riding an electric bike starts before I leave the pit. The simple switchgear, upright seating position, and high, wide handlebar wouldn’t be out of place on a stripped down, parallel-twin standard. But when you turn the key and thumb the starter, a smallish LCD shimmers to life (showing speed, gear position, energy consumption, battery status, estimated range, and system status), and a needle swings across the large analogue tach to indicate the TT is turned on. (Holding the starter again switches the bike from Eco to Sport mode.) Clutch pull is light-to-moderate and prodding the shifter down a notch from neutral puts the bike into second gear — not first — with a clearly audible clunk.

When transitioning between fully closed and open throttle (and vice versa), response is abrupt with a hint of drivetrain lash. Give it stick and the Empulse TT springs forth with an exhilaratingly swift and steady surge of power — and a whine like a Star Wars X-wing starfighter. Acceleration is more immediate in Sport mode, and cutting the throttle results in regenerative braking (returning power to the battery) and a sensation on par with the engine braking from a traditional gas-powered engine.

Because abundant torque is on tap immediately regardless of gear, a six-speed transmission seems overkill. In fact, as the day progresses I take to shifting from neutral up into third when leaving the pits and circulate shifting only as high as fifth, still good for a maximum speed of 170 km/h (top speed on the day is 178 km/h).

Although it feels compact, a hefty battery means the Empulse TT isn’t a featherweight (dry weight is a claimed 213 kg). You can hustle it through the tight stuff — at High Plains that’s a blind-entry downhill chicane called “The Prairie Corkscrew” — but it takes more effort than a similarly sized gas-powered motorcycle. It’s slow to turn in, but is stable and predictable as long as throttle application is smooth.

Factory settings for the 43 mm inverted fork and single shock are too soft for track riding (in everyday situations they’d be fine), though both are fully adjustable. Once heeled over, the TT holds its line well with smooth, neutral steering. (You’ll run out of cornering clearance and grind footpegs to powder long before the Continental Sport Attack II tires — 120/70-17 front, 160/60-17 rear — run out of grip.) Front braking power, supplied by four-piston radial Brembos and dual 310 mm rotors, is formidable.

Despite a rotating supply of test bikes and a schedule to provide time for topping-up throughout the day (15 minutes of spirited track riding consumes 35–45 percent of the battery), the final session is delayed due to high ambient temperatures (30-plus degrees) causing longer than expected charging times. While sipping a Gatorade in the shade, I ponder exactly how and where you’d use an Empulse TT.

With slicks and rearsets its on-track performance would undoubtedly improve, though there are many bikes that are a better track machine. It could do duty as a sporty standard, but a significant drawback would be limited range and the inability to recharge in the amount of time it takes to down a cappuccino. (Victory hasn’t released range figures for the Empulse TT, but Brammo claimed the Empulse R could cover 206 km in the city, 93 km on the highway, and 129 km in combined mileage. If the TT’s battery performance is improved 10 percent, it seems reasonable to assume range will improve by around that percentage as well.)

I’d consider the Empulse TT (and almost every production electric motorcycle) best suited to moderate distance commuting — but don’t tell Steve Menneto that. “We want the Victory [electric motorcycle] line to be more performance focused,” he says. “It’s not about basic transportation from A to B — we don’t want to do that with our brand.” At $23,799, I suspect Menneto will realize his wish.

During the press presentation an “electric rider profile” flashes onscreen with the words “status driven,” “tech-savvy,” “thrill seeking,” and “toy collector” flanking a picture of Robert Downey Jr. in character as Tony Stark, aka Iron Man. Even with a finite number of playboy billionaires, Victory anticipates demand. “Over 1,000,000 electric motorcycles are projected to be sold globally this year,” says Josh Katt. “Granted, most of those are smaller, less expensive models, but it’s a growing market and we want to get in on the ground floor.” And doing so ahead of Harley might just be a good boost to Victory’s ego.